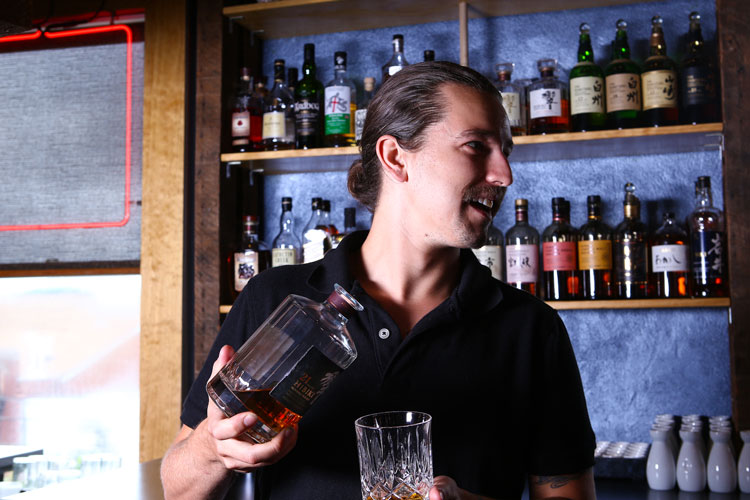 Everywhere Colin Anderson goes, he settles deeper into his groove. “Every time I’ve had a new job, I get a chance to re-create what I’m doing for the space but also up the standard for myself,” he says.

His upward trajectory continues apace at his current position, bar manager of Umami in Lawrenceville. Anderson joined the team of the third-floor izakaya, known for its relaxed vibe, tasty late-night menu and a rotation of DJs spinning chill tracks, in 2017. He inherited a bar program with solid, if a hair too sweet, cocktails and a good selection of sake. Anderson stepped behind the stick with a reputation for crafting intricate, balanced cocktails built on a foundation of well-researched study.

Anderson’s career started in 2009 at the Cross Keys Inn in Indiana Township, where, as a barback, he found himself under the wing of a 30-year veteran bartender named David Mrdgenovich. Although Mrdgenovich’s style was a bit throwback — muddling inexpensive fruit into an Old Fashioned, for example — he was interested in the modern cocktail resurgence and took Anderson to visit Embury, Pittsburgh’s prototypical modern cocktail bar. “I’d started reading cocktail books already, but that was the first time I saw it put into action. That’s when I started to really seek it out,” Anderson says.

Stuck with a bug to improve his skills, Anderson traveled to New York City and other cities seeking inspiration and education. He had the opportunity to exercise his aspiration when was hired to run Bar Marco’s cocktail program in 2012. It was at Marco that he started to craft his own tinctures, syrups and other mixers. He even had a laboratory in the restaurant’s basement.

“I’m the type of person who gets really, really into something if I’m motivated. I start to nerd out really hard about stuff,” he says.

In 2013, Anderson built the cocktail program at Cure in Lawrenceville, a move that allowed for a more profound expression of his craft. Although the restaurant’s cocktail menu was limited, Anderson experimented with modernist techniques such as powders and foams, using top-notch tools such as high-end dehydrators, Cryovac sealing and immersion circulators, to marry progressive thinking with classic influence.

Joining the team at Umami called for a slight shift in his approach to menu building. “It’s taking party drinks and elevating them, but not in a, ‘I don’t understand what’s going on here’ kind of way. It’s about adding little bits here and there. It seems to work,” he says.

His secret sauce of meshing the establishment’s playful vibe with a serious cocktail program is evidenced in the glass with drinks such as a “rum and cola,” a soda-free, potent fizzy drink in which amaro, aromatic bitters and a finishing squeeze of lime replace too-sweet cola.

Anderson’s current focus is on perfecting in-house carbonation of cocktails and how the technique affects the balance of flavor and texture in a drink. One example of this is chūhai, a sochu-based highball that’s popular in Japan. “The future is highballs. Old Fashioned is out, highballs are in. And more tiki,” he says.