Plus, a WVU team develops a solar-powered log cabin and a Pitt degree is named one of the best values in higher education. 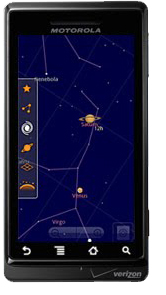 CMU Students Star in Google Sky Map Collaboration
Smartphone users walk around with a lot in their pocket. From gigabytes of Web content to hours of video and (of course) photos, smartphones enable us to carry a lot on the go. While most people may not realize it, more than 20,000,000 people worldwide are also walking around with a little piece of the 'Burgh in their pockets.

That piece, the Sky Map app for Android, was created by Google Pittsburgh back in 2009 and has been a smash-hit ever since. Now, Google is hoping to build on that success by opening up the app to another group of innovative Pittsburghers: The online giant recently announced that it will be collaborating with CMU students to improve the app, which makes use of various sensors to give users a window into the astronomical wonders right above their heads (assuming it's nighttime).

This collaboration will involve open-sourcing the app. This will allow students to augment, alter and experiment with the code as they wish with Google engineers taking on an advisory role.

New features and functions are sure to come, but in the mean time the app remains available for free download through the Android market.
—Rob McCoy, PM Assistant Editor

Solar log cabins. Probably not something most would expect to see, but that's exactly what a team of West Virginia University students will be showing off when they compete in the Department of Energy's Solar 2013 Decathlon.

The interdisciplinary team, one of only 20 selected for the competition, will design a home that combines smart-home technologies with traditional Appalachian log cabins. The project, titled "Preserving Energy with Appalachian Knowledge" (PEAK), is being overseen by a group from various programs and schools across the WVU campus.

The team will receive a $100,000 grant from the Department of Energy and will have a maximum budget of $250,000 for the house. The entrants will be judged on various criteria, but above all, the project home must produce more energy than it consumes.

The project also includes an international component, as the WVU team will collaborate with students from the University of Rome, Tor Vergata.

Although specifics for the upcoming competition have not been detailed, homes have been built and displayed in the national mall in Washington D.C. in previous years.

University of Pittsburgh Named a Top Value by Kiplinger
After paying countless dollars for higher education, students will find it comforting that a local institution offers of one the best values. Pitt has just been named one of the top value colleges in the nation. The Kiplinger 100: Best Values in Public Colleges, 2011-12 ranks the best values in public colleges annually in Kiplinger’s Personal Finance.

This year, Pitt was one of only three colleges in Pennsylvania to make the list—and was ranked as the best value in the state. The process for choosing which schools have the best value begins with data from 500 schools before it's narrowed down. The school rankings are based on a number of academic qualities, including graduation rates and student-faculty ratios.
—Shane Bliss, PM Editorial Intern

Renowned author and instructor Azar Nafisi is known for her best-seller Reading Lolita in Tehran. Catch her at Heinz Hall Feb. 29 by scoring a pair of tickets, courtesy of Robert Morris University, which presents the Pittsburgh Speaker Series. We'll select the winner Feb. 22, so be sure to enter before then. Good luck!