Ready to go full dark? Here are three expert tips for pulling off a black in your home. 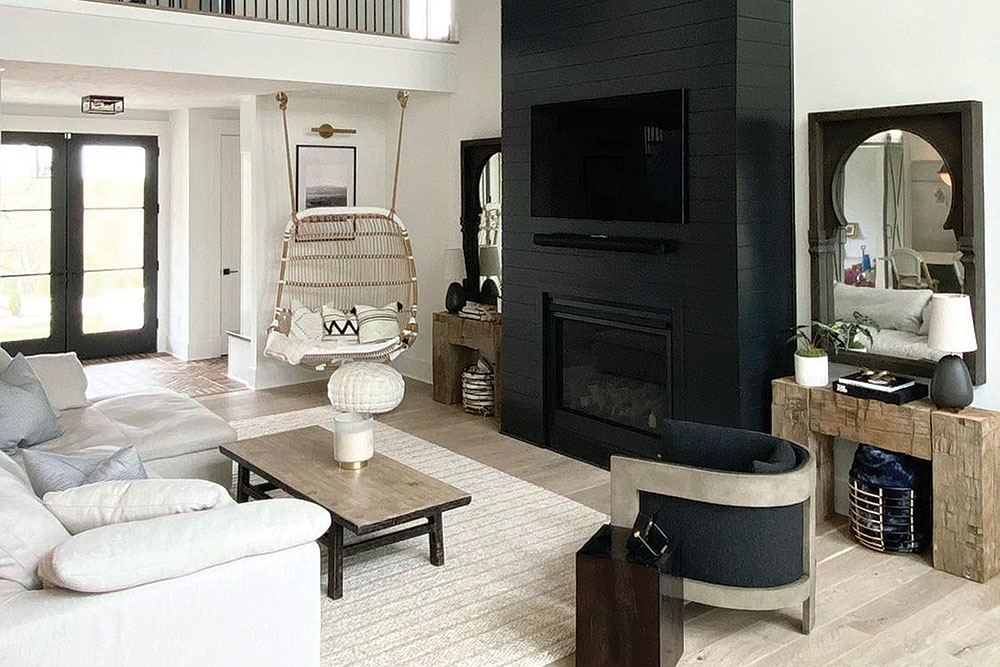 When Natalie Reisinger imagined her dream home, the fantasy was always the same — a white, modern farmhouse with clean lines and lush landscaping. So, when she and her husband sat down with the design team at Barrington Homes and began the process of making that fantasy come to life on an expansive lot in Mars, Reisinger excitedly laid out her vision.

The team was familiar with the aesthetic — very familiar. They’d already drawn up similar plans for several other homes in the same subdivision. If you build a big white farmhouse, they warned her, you’ll be one of at least three in the neighborhood. 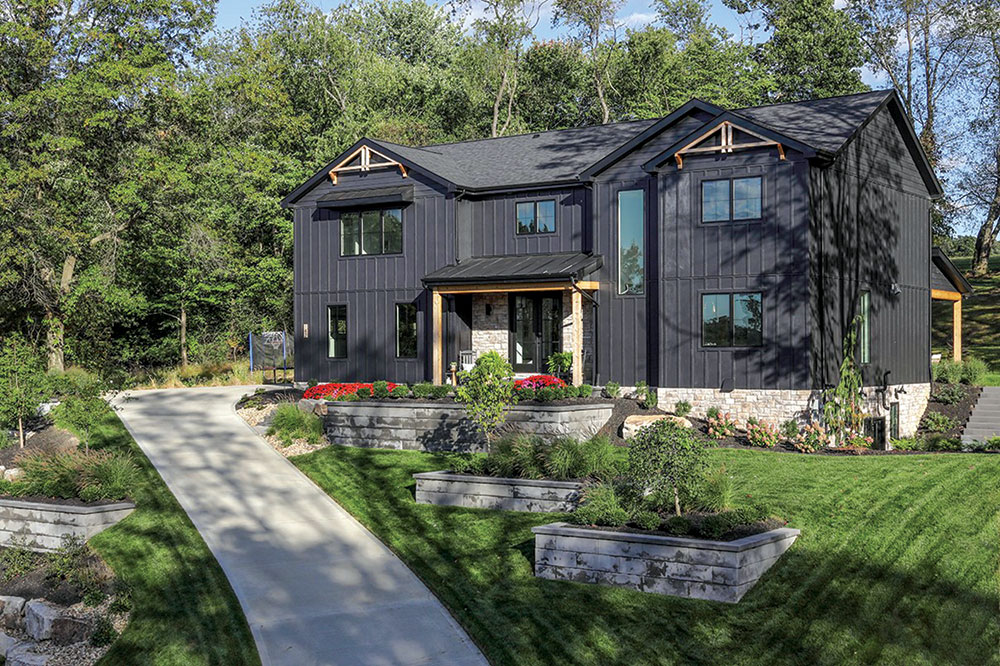 Reisinger groaned. There was no way she was going to build a lookalike house.

“My husband and I like to be different, and we’re not afraid to take risks,” Reisinger says. “So, we thought, ‘What if we do the opposite?’”

And Reisinger’s black suburban farmhouse — on Instagram at @blacksuburbanfarmhouse — was born. 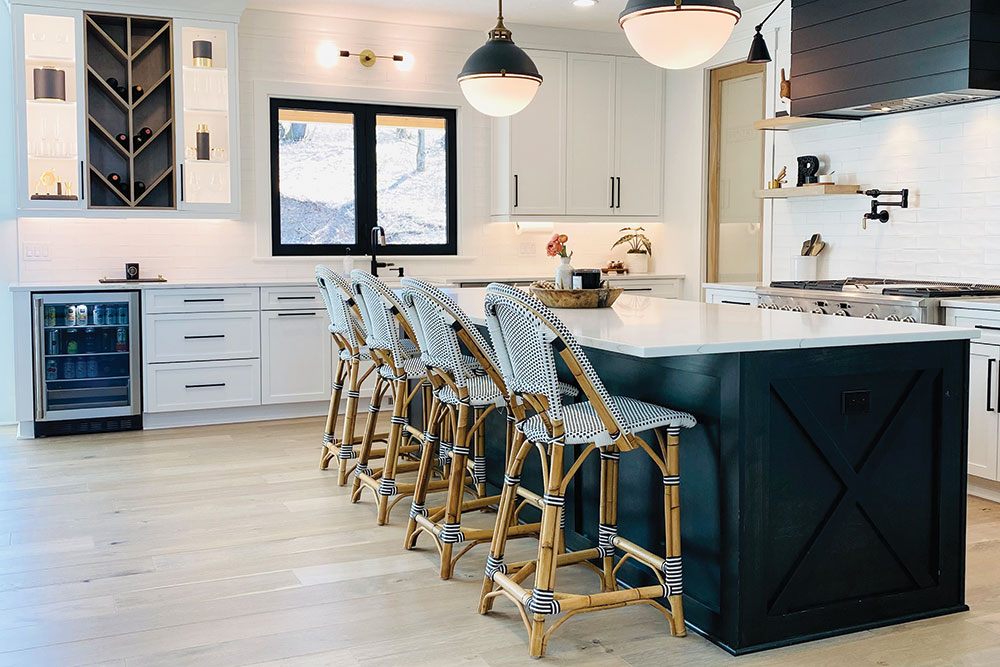 While Reisinger’s home stands out, there’s no doubt that black exteriors are having a big moment.

Phaidon Press, the global publisher of books on art and architecture, may have kickstarted the trend in 2017 when it released “Black: Architecture in Monochrome.” The book showcases 150 stunning black structures designed by some of the world’s leading architects, reminding designers and homeowners alike that black can be more than an accent color. 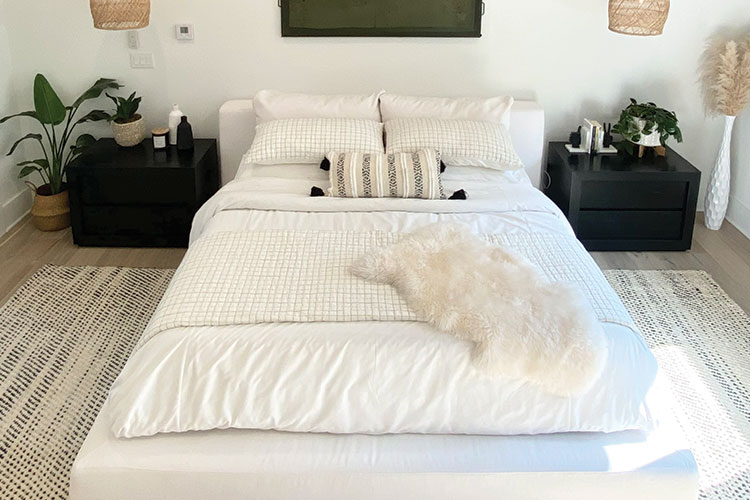 Today, Pinterest boards and Instagram feeds are flooded with examples of the moody trend brushed over every home style imaginable, from rambling ranches to classic Colonials.

Never afraid of a black moment, Lauren Piasecki, founding partner of Black Cherry Design in Garfield, was pleased to see the dark design renaissance. Safe and neutral grays and greiges have slowly given way to more saturated tones inside, too, she says, with darker fixtures, cabinets and wall colors. 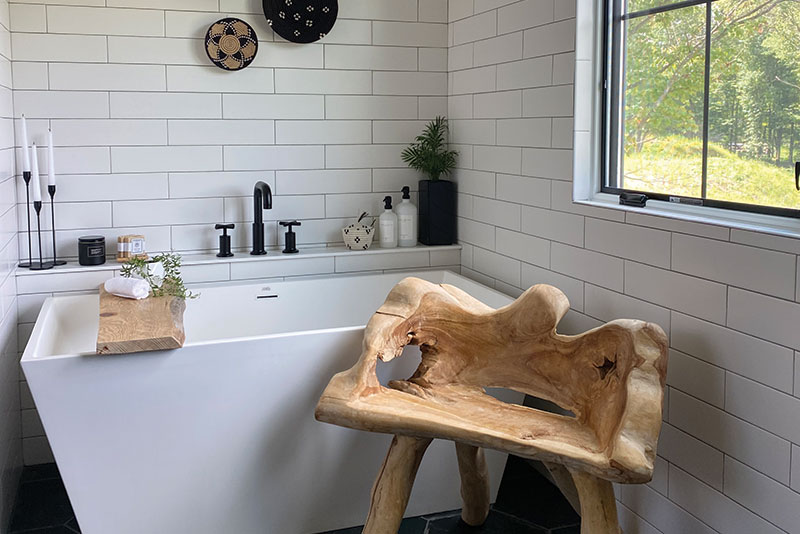 As with any trend, though, Piasecki’s enthusiasm comes with a few caveats.

“There are so many more considerations than, ‘I want to paint my house black,’” she says.

Ready to go full dark? Here are three expert tips for pulling off a black in your home.

It’s easy to get excited about a fresh fad, but even when clients are eager to jump all in, Piasecki is quick to remind them that, as with any design element, more isn’t always more.

“You have to look at the total composition,” she says.

Reisinger did just that, albeit reluctantly, with her home. Originally, she wanted every surface on the outside of the farmhouse to be black, but eventually, her love for mixing tones and textures tempered that plan. Natural wood posts and fretwork and a stone porch help to balance the home’s vertical, black siding.

“It’s a nice contrast, a little pop,” Reisinger says. “Plus, it dressed up the house a bit.”

For those who don’t share Reisinger’s sense of design adventure but want to try the trend in measured doses, Black Cherry’s lead designer Abby Dudley suggests looking to the city’s older homes for inspiration and using the color in naturally occurring places, such as slate flooring or iron accents. 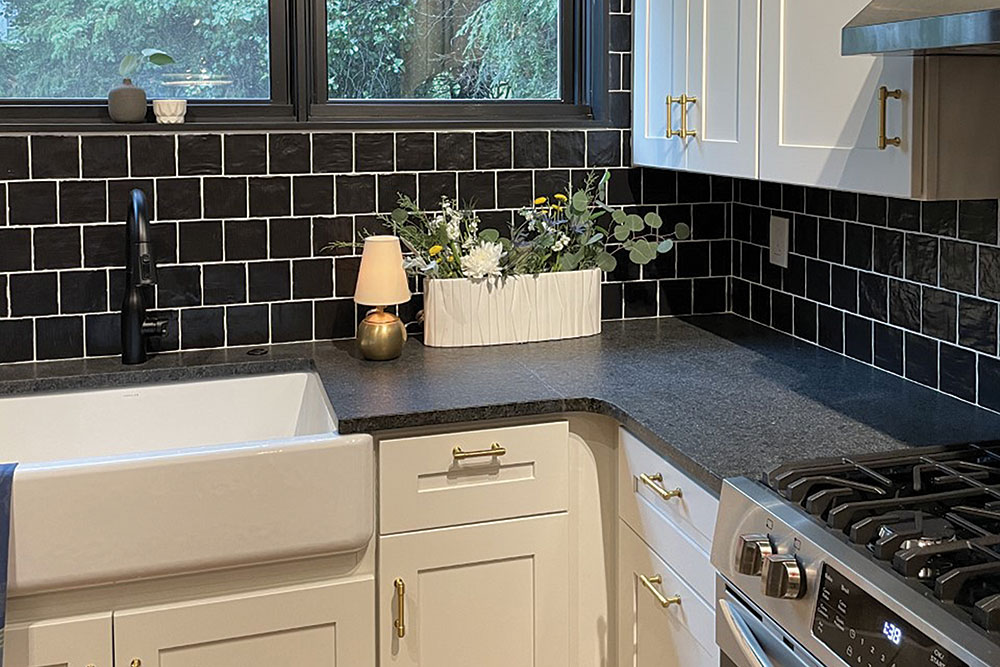 2: THERE’S MORE THAN ONE BLACK

Earlier this year, when Black Cherry Design collaborated with development company Promise 33 on a two-story flip on Melville Lane in Sewickley, Piasecki found herself with the troublesome task of toning down the home’s breadth of yellow-orange brick.

She didn’t have the budget to cover the brick or to replace the white, aluminum siding, so she elected to paint the existing siding black. But not just any black — a deep-blue black that complemented and cooled the sunny bricks, giving the home an updated, contemporary look. 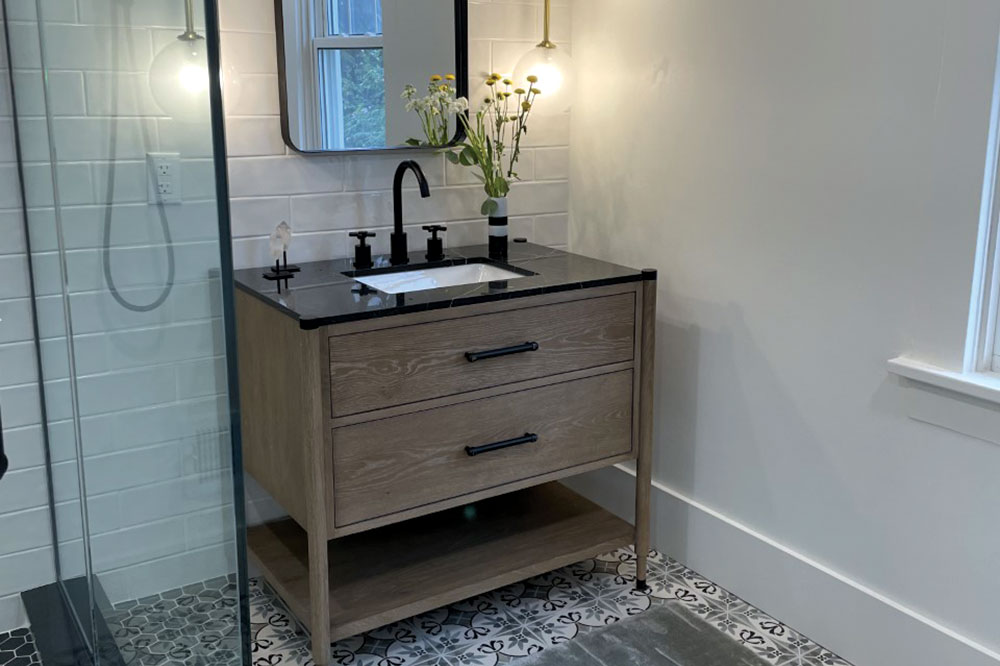 The right tone and finish can make all the difference. Just as with whites and grays, the undertone of black really matters. Warmer, brown blacks will read more traditional than cooler, blue blacks. Saturated, matte blacks absorb light while glossy blacks reflect it.

“Don’t look at all black as being the same,” Piasecki warns. “You definitely want to sample it first.” 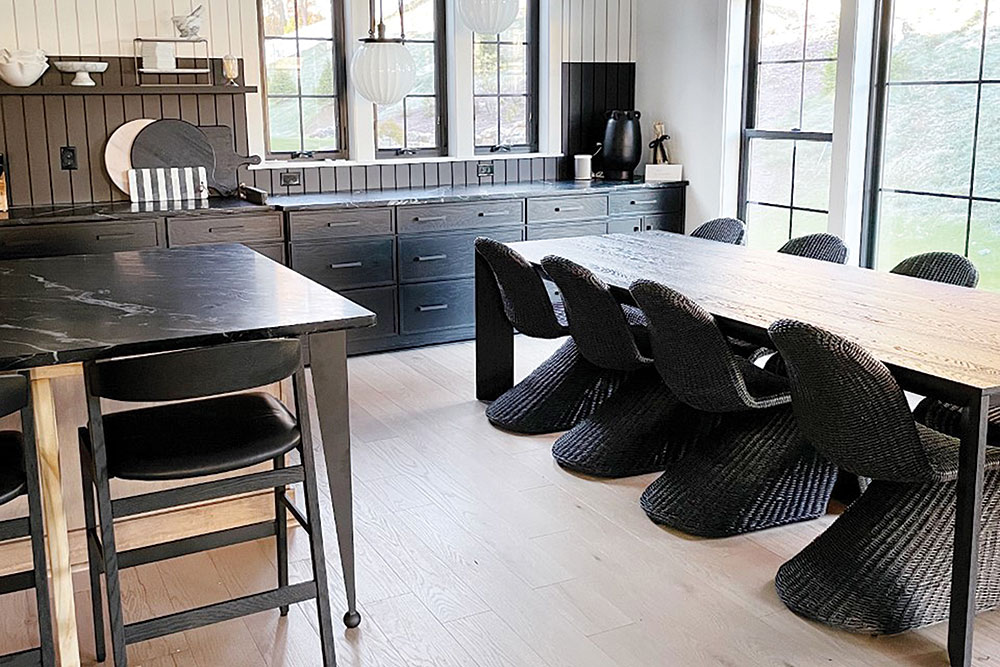 3: FIT YOUR STYLE AND YOUR STREET

In Brianne Conley Kordenbrock’s neighborhood — a collection of custom Infinity homes in a suburb north of the city — dark exteriors aren’t unusual. Varying shades of charcoal and navy mix neatly with the more traditional grays, whites and tans. But even in that conglomeration of color, Kordenbrock’s jet-black beauty stands out. 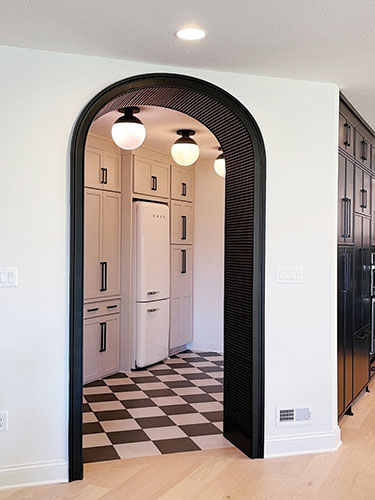 The decision to go with an all-black exterior was not a popular one at first. Some of her friends, and even her builder, questioned the call. Kordenbrock, who owns No. 14 clothing boutique in Lawrenceville, herself hedged on several design choices. Exteriors are a commitment. They’re expensive to change — and neighbors tend to have opinions.

“The ultimate deciding factor was advice from a friend,” Kordenbrock says. “He told me to go ‘full send’ on black if I wanted to do something different. Things became very clear to me after that.”

She realized it wasn’t just about choosing a color, it was about choosing a mood, one she wanted to be classic, bold and unexpected. Kordenbrock made a flurry of last-minute changes to match her newfound confidence in the design, deciding the once-stained portions of the exterior would be painted black to match the cement siding and, inside, the kitchen cabinets and countertops would get the same saturated treatment. Even the hammered copper soaking tub has a matte black finish.

Reisinger, likewise, based many of her interior design decisions on the dark exterior of her home. The floor-to-ceiling fireplace, kitchen island, porcelain tile and light fixtures are all finished in true black tones.

The aesthetic does come with some challenges. Kordenbrock is dusting more than usual while Reisinger’s power washer saw a lot of action over the summer. But the pros definitely outnumber the cons. 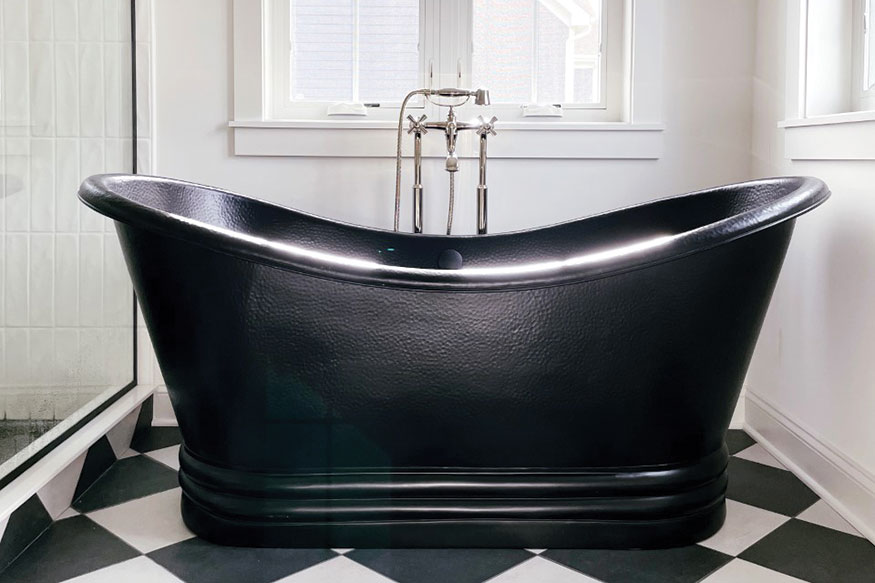 Black serves as the perfect template for holiday decorations (Halloween was particularly spooky at the Reisinger house this year), and it also gives landscaping a neutral backdrop on which it can really pop. Plus, giving directions to friends and delivery drivers is a breeze.

“There’s just not another house quite like ours, and I love that,” Reisinger says. “When you crest our hill, it just grabs you.”