With its cedar siding and tree-trunk porch columns, the Three Bears House — a former mill house in Hazelwood — is its own kind of magic. 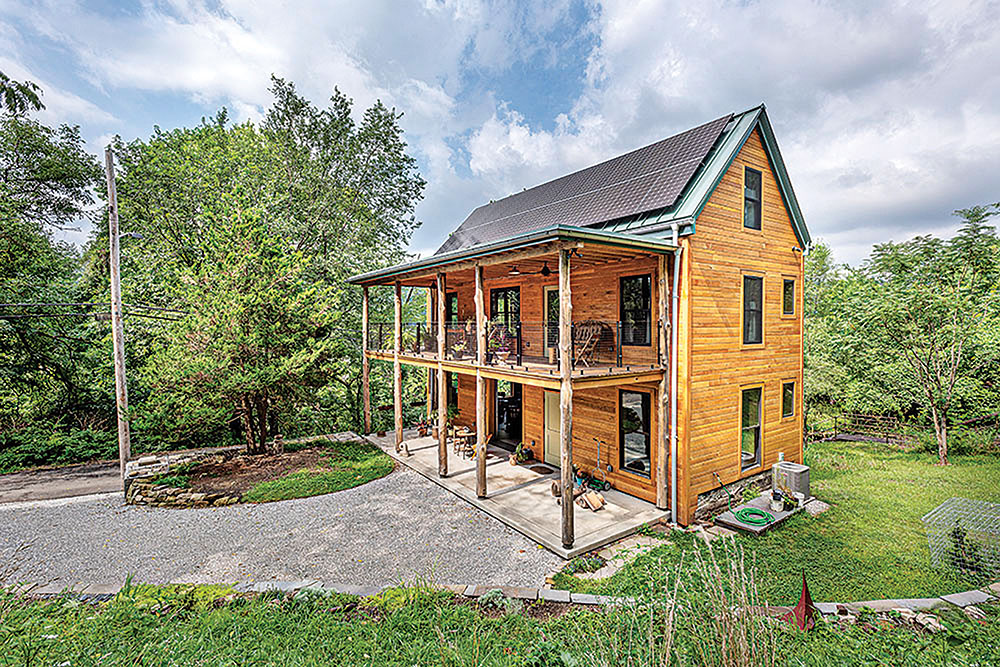 Back when Hazelwood’s Mill 19 was still a place to make steel, workers woke early, poured out of tall, narrow houses and descended the nearest set of city steps until they had arrived at the monstrous building along the Monongahela River.

On the southern stretch of the neighborhood’s Gate Lodge Way sat four such houses, occupied by several such workers, situated along just such a flight of steps. Over the years, after the mill folded and the residents fled, the houses, too, began to disappear. Bulldozers took the structures; time and nature came for the foundations. 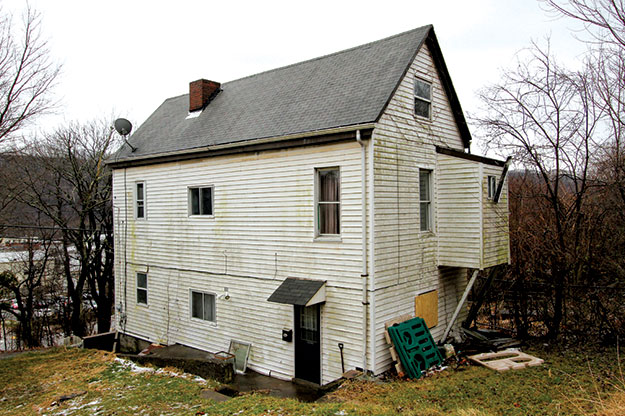 THE HOMEMAKER THOUGHT, WITH A BIT OF WORK, THE HOUSE COULD BE THE PERFECT PLACE FOR HER PRINTMAKING AND LETTERSET DESIGN STUDIO. IT TURNED OUT TO BE SO MUCH MORE.

The remaining house was something of an oddity. Its steep staircases and peculiar layout hinted at a former life as a boarding house. White siding and a questionable bathroom addition — protruding from the house like an appendage and bolstered by nothing more than two-by-fours — didn’t offer much curb appeal. And the pothole-pocked alley made even getting to the driveway a bumpy adventure.

But Morgen Bell thought, with a bit of work, it could be the perfect place to house her printmaking and letterset design studio. It turned out to be much more.

With expertise from architect Jeffrey DeNinno, of Highland Park-based DeNinno Architects, and her mother Martha Bell’s financial support, Morgen and her husband, Bill, polished the house that was once an eyesore into a gem that serves as a workshop on the first floor and a family home on the top two. 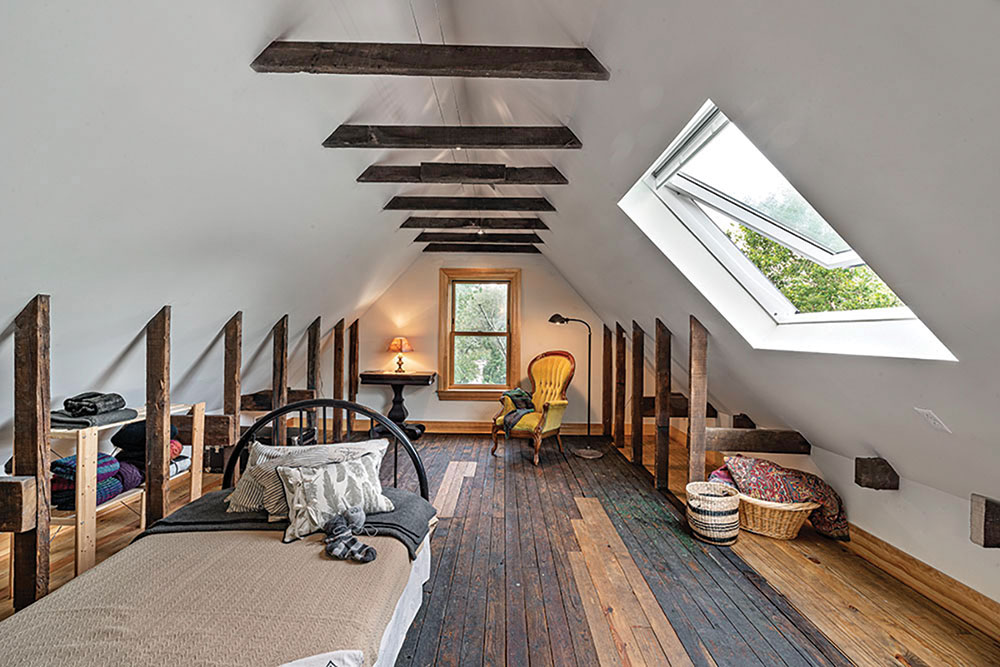 INTENT ON PRESERVING THE CENTURY-OLD HOME’S HISTORY, THE BELL FAMILY RETAINED AND REUSED MATERIALS WHENEVER POSSIBLE, INCLUDING KEEPING THE ORIGINAL HARDWOOD FLOORING.

They never intended to use the house as their primary residence, but they fell in love with its location and country-meets-city contradictions.

“We took it from a typical, Pittsburgh hillside house to something special,” DeNinno says.

The renovated home looks as though it’s been pulled from pages of a fairytale, with white oak siding, a double-decker porch and towering, tree-trunk columns. The Bells even gave it a fitting moniker — the “Three Bears House.” But getting there, particularly in the midst of the coronavirus pandemic, was a bit of a challenge.

The process began in 2019 with a messy, but necessary, demolition. The team tore the house down to its studs, removed the central chimney and sliced off the problematic addition. They also pushed back the fallen earth that had swamped one side of the house and secured it behind a retaining wall of split-face blue stone. Their work unveiled a sturdy, balloon-frame structure with large, well-placed windows.

“It was a simple style, nothing fancy,” DeNinno says. 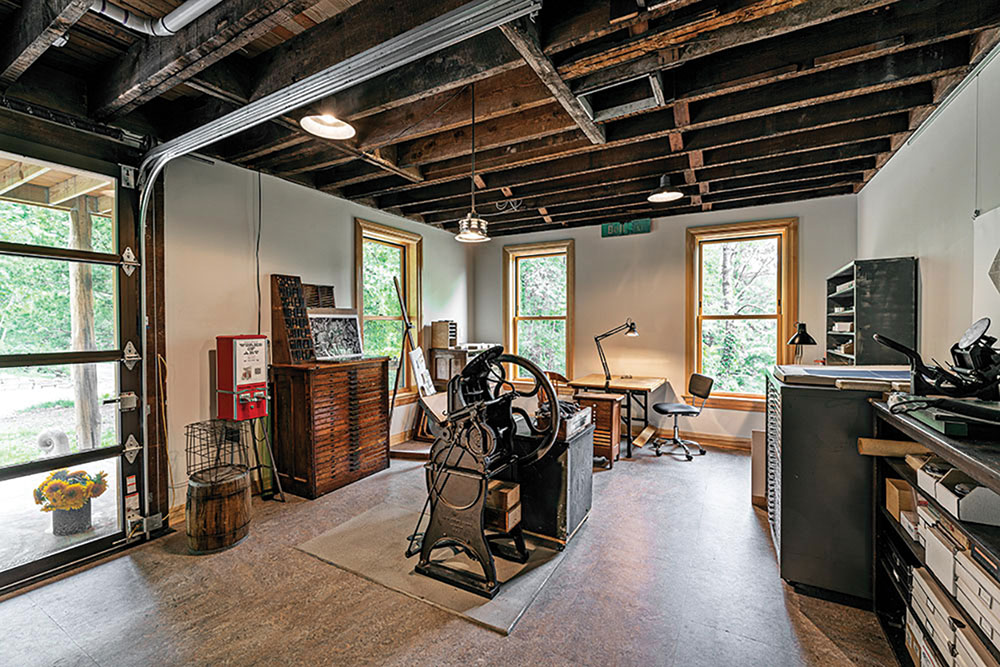 But Morgen wasn’t looking for fancy; she saw potential. DeNinno agreed her plans for a workshop, two bedrooms, a small kitchen, a living room, a bathroom and ample outdoor space were possible but probably pricey. That’s when Martha stepped in. The family matriarch had both a knack for design and a chunk of money she’d inherited from her own mother, and she was eager to use both to help her family.

The timing was poetic. It was the spring of 2020, and the coronavirus pandemic had just shut down schools, forcing Morgen to spend her days playing teacher to her daughter rather than helming a renovation.

“And it gave me something to do other than sit in my house,” Martha adds.

So, with Martha and DeNinno leading the charge, the renovation began in earnest. 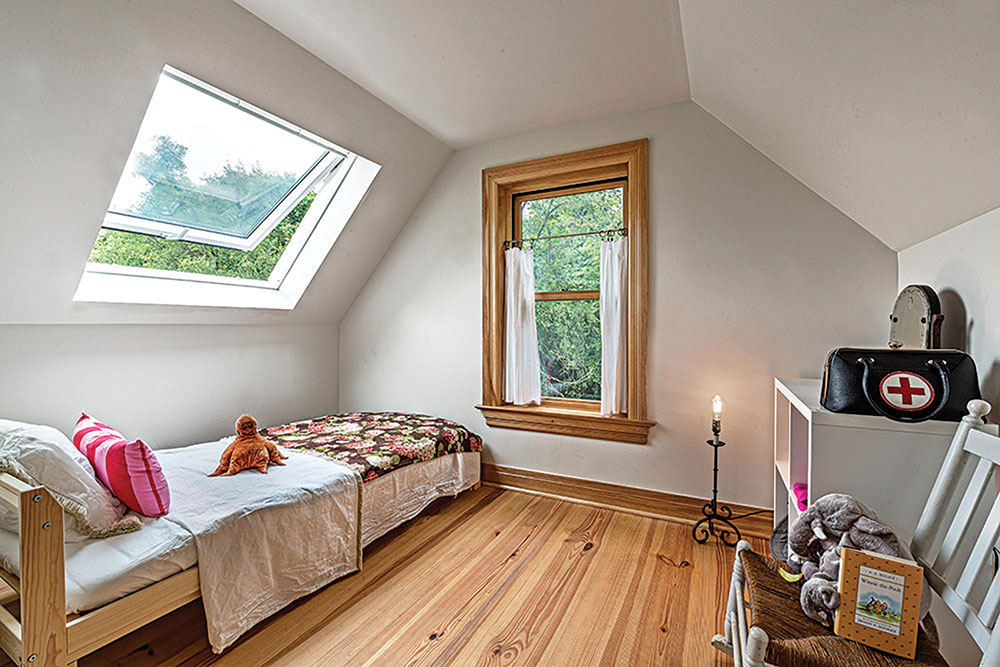 Martha was set on retaining and re-using materials whenever possible, both to preserve the home’s history and to be environmentally friendly. Inside, that meant salvaging as much of the original hardwood flooring as possible, keeping old staircases and scrubbing decades of soot from the framing so it could remain exposed. Outside, when Martha insisted on saving the property’s lone cedar tree, DeNinno shored up the hillside underneath it with Gabion boxes full of scrap limestone from a local fabricator.

“At first, I didn’t understand why she wanted to keep it, but I’m glad we did,” DeNinno says. “It belongs there.”

Given the home’s age — it was built circa 1890 — and condition when purchased, most of the material had to be new. Even then, DeNinno carefully sourced the materials, preferring to buy locally and sustainably.

A natural linoleum covers the first-floor workshop, 22 solar panels line the standing seam metal roof, and skylights flood the attic with natural light. Morgen managed to track down a sink for the second-floor bathroom for a mere $5. And DeNinno claimed a powder room door from an old church.

“It’s the best door in the house,” Bell says his find. 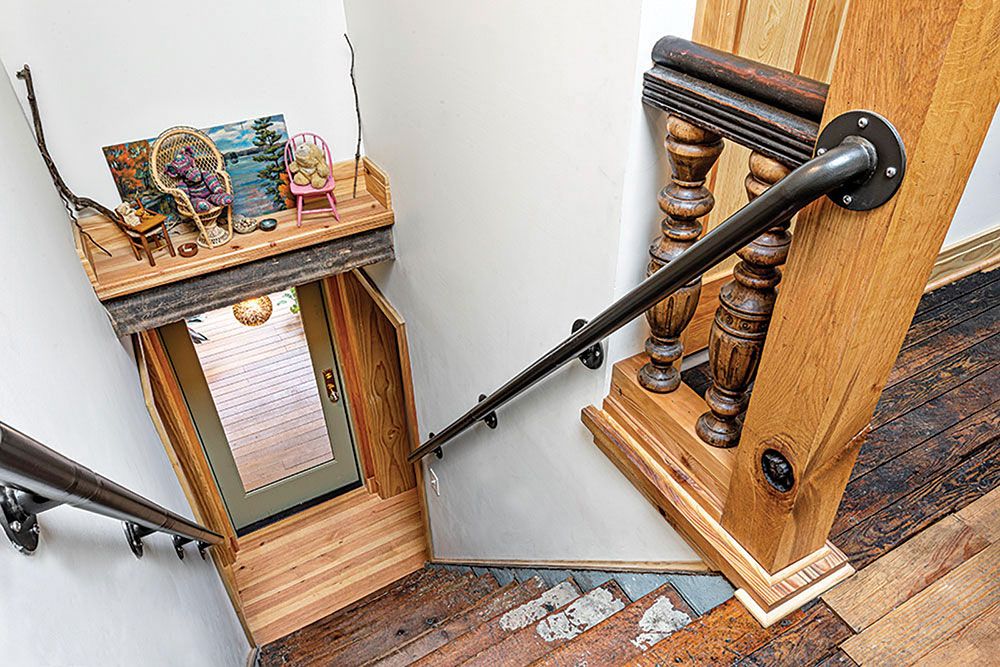 Though the house is full of such hidden details, perhaps the finest is also its most visible — the porch. After Martha and DeNinno decided the customary 6-by-6 posts wouldn’t do, a sawmill operator and his son handpicked the tree trunks that would serve as porch columns from where they were logging timber in West Virginia. The installation was a painstakingly precise affair; the tree trunks had to be lifted by a crane and dangled until aligned just so before they could be dropped into place.

Martha was so impressed by the process that she spent the entire day recording it on her phone.

The tree trunks lend the house a rustic charm that no one could have imagined when it was still covered in white siding. And the porch itself, at 10 feet wide and running the length of the structure, nearly doubles the home’s living space.

“It expands the house and gives it a presence it didn’t have before,” DeNinno says. “It transformed the house.”

During the peak of construction, on quiet mornings before the crew arrived, DeNinno used the porch as his office and could almost convince himself he was stationed along a country road and not a city alley.

It’s an odd and beautiful juxtaposition, Martha says, like living in a city park. 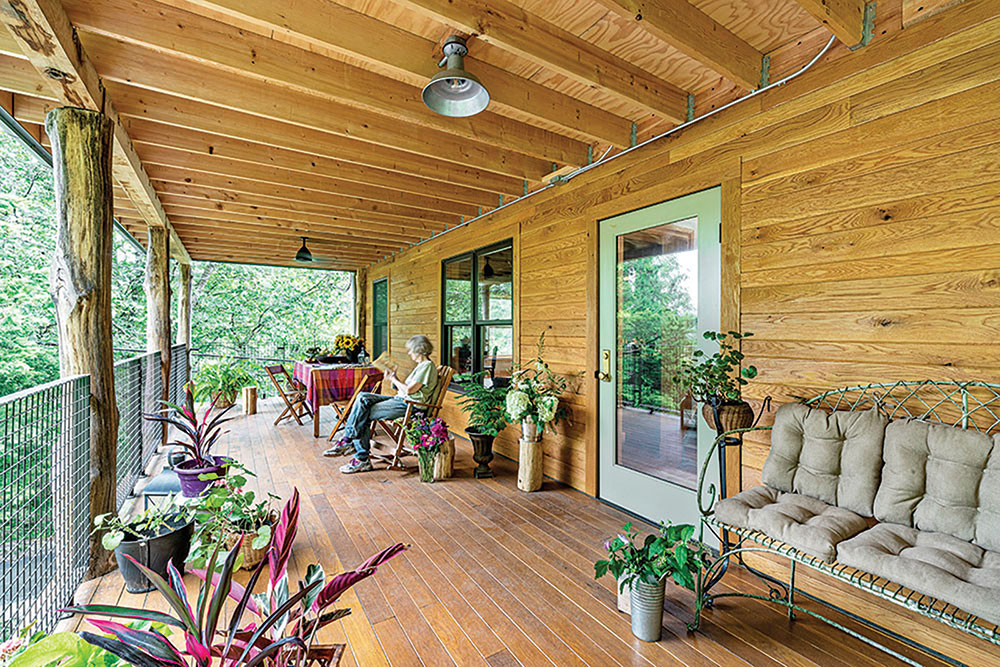 From the porch, the family can watch deer wander across the yard and birds gather in the cherry trees, but they can also hear passing trains (which they’ve learned to identify by their whistles), spot the Glenwood Bridge and peer across Second Avenue into the local recycling plant.

It isn’t for everyone, they admit.

“But I like it,” Morgen says with a shrug. “It’s got a gritty, Pittsburgh thing going on, and recycling I wholeheartedly endorse. I can’t be mad at it.”

They do have some concerns about Hazelwood’s impending development and designation as Pittsburgh’s new “it” neighborhood. Ironically, Martha laments, the steel mill that once made Hazelwood a melting pot of races and ethnicities is the very thing that could result in its gentrification.

A trio of Pittsburgh-based foundations — The Heinz Endowments, the Richard King Mellon Foundation and the Claude Worthington Benedum Foundation — are transforming 178 riverfront acres, including the former mill site, into what’s being touted as “a model for the transformative redevelopment of an urban brownfield.” Hazelwood Green, as it’s called, has garnered both praise (notably from President Joe Biden) and criticism.

Much of that consternation occurred four years ago, when the city offered up Hazelwood Green as a possible location for Amazon’s HQ2 project. The Amazon deal eventually fell through, but development at the site has forged ahead. The most celebrated resident is Carnegie Mellon University, which is using the mill’s original steel skeleton as the location of its new robotics innovation center and advanced manufacturing institute. 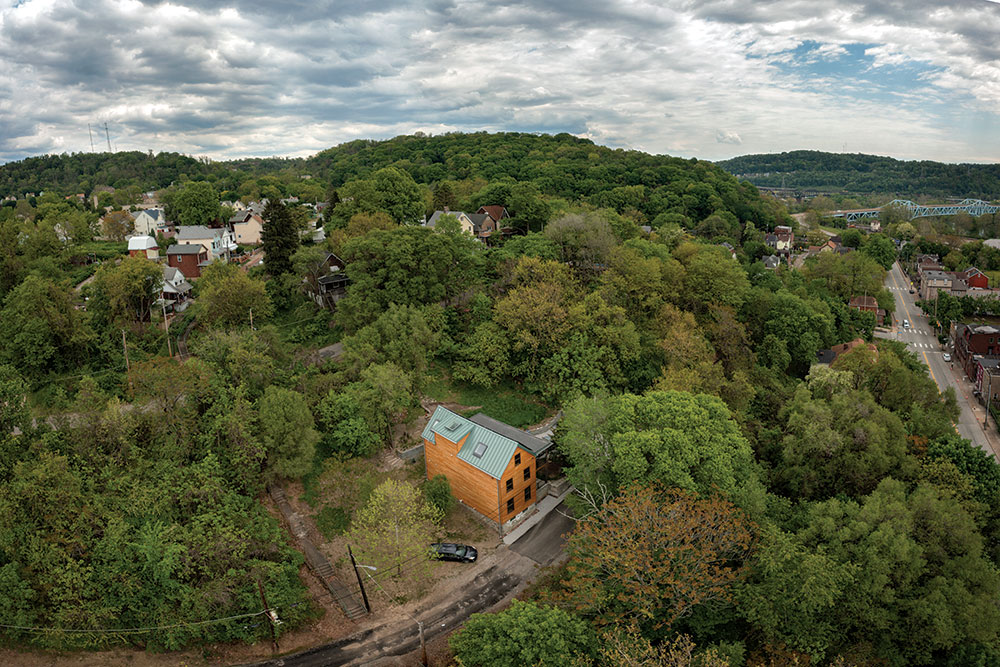 CITY MEETS COUNTRY AT THE THREE BEARS HOUSE, WHICH IS SURROUNDED BY GREENERY, YET CLOSE TO CITY AMENITIES. AMONG THE NEW ADDITIONS TO THE HOUSE ARE SKYLIGHTS AND A DOUBLE FRONT PORCH WITH TREE-TRUNK POSTS | DRONE IMAGE BY DIVINEMAYHEM STUDIOS

While Hazelwood Green is sure to give the depressed neighborhood a much-needed economic boost, the Bells — who note their appreciation for the local Hazelwood groups working to preserve the Greenway — fear that rapid growth at the site, along with the neighborhood’s prime location near Oakland’s hospitals and universities, could result in a flood of new residents and construction.

They’ve petitioned the city to buy several empty, neighboring lots so they can maintain the privacy that they’ve thus far enjoyed. And, if their neighbors sign off on the plans, they will consider constructing a family-friendly second home on one of those lots.

If they decide to build, DeNinno should expect a call. Martha believes their synergy fueled the successful final product. They spent an awful lot of time together as the project unfolded, sharing coffee, ideas and inside jokes. It was their conversation that sparked the tree-trunk column concept. And Martha still teases DeNinno about the seven hand-rubbed coats of shellac he had added to the interior wood trim as a way to highlight the character of the pine and add depth to the finish. 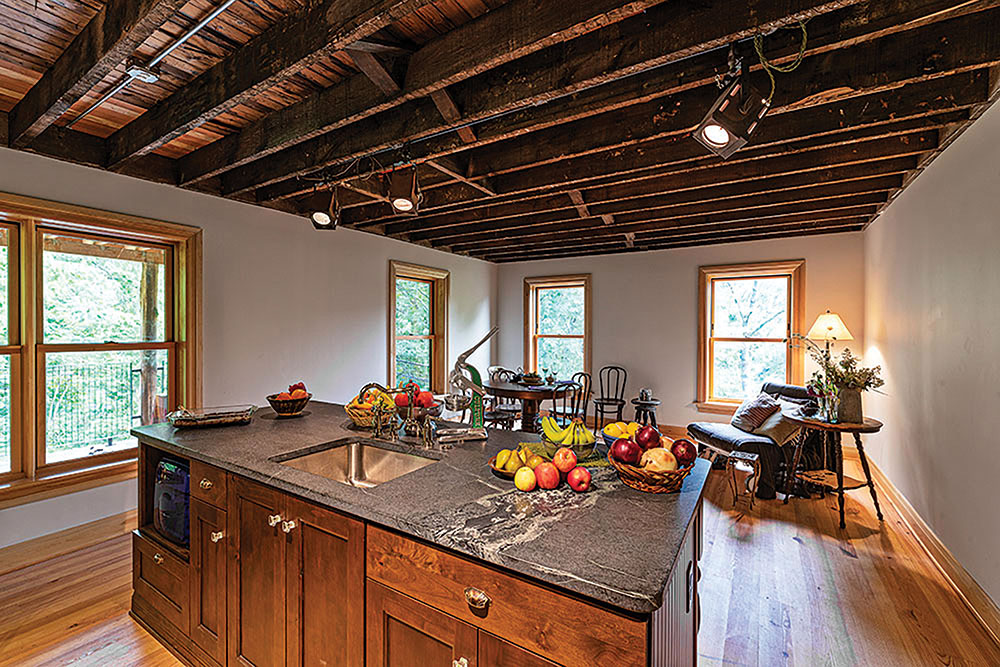 For DeNinno, the project was something of a palate cleanser, a break from the larger, big-budget structures he typically designs. The Bells weren’t interested in en-suite bathrooms and restaurant-inspired kitchens. Morgen didn’t even want a dishwasher.

“It was a tough project to leave,” DeNinno admits. “It’s sort of like children; you have to let them go.”

But the ride was a good one — and the result couldn’t have been better.

“It’s something I designed and something I’m proud to have worked on, but it really reflects the owners,” he says. “This is truly their house, as it should be.”

This article appears in the July 2022 issue of Pittsburgh Magazine.
Categories: HOME + Design