Andrea Danielson has a passion for caramel-filled Dutch waffle cookies. 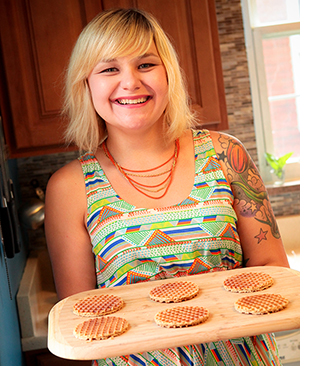 MEET THE SUGARMAID OF STROOPWAFELS
As a kid, Andrea Danielson couldn’t get enough of the stroopwafels she ate while visiting family in Holland. She graduated from New York’s Natural Gourmet Institute and went on to work at a few bakeries but always kept those caramel-filled Dutch waffle cookies in mind. In March, she launched sugarmaid stroopwafels from her Pittsburgh home.

Baker’s tip?
Be creative. Add something that’s a little unusual. [I like] adding cayenne pepper or paprika.

Guilty-pleasure sweet?
York peppermint patties. They’re so good — I don’t know why. I want to do my own version.

Second-best use of caramel?
Pour it on ice cream and add sea salt. [That] makes anything better.

RESERVE A SEAT FOR DINNER UNDER THE STARS
Everyone has eaten dirt and fried chicken in their lifetime. But when chefs Keith Fuller (of Root 174) and Richard DeShantz (of Meat & Potatoes) are preparing those dishes — and five more — at a downtown pop-up dinner, things instantly become more appealing. For the Urban Supper, held next Saturday, DeShantz and Fuller will be pulling out all stops.

The event is co-presented by the Pittsburgh Downtown Partnership and ladies of eatPGH, who are releasing their second book, Pittsburgh Chef’s Table, later this year. Knowing that Pittsburgh weather is unpredictable, the organizers have set a rain date for the following Saturday.

HEFTY MAMA LENA’S II HOAGIE FEATURES LOCAL BREAD
Mancini’s is the ubiquitous bread of choice for many locals and area businesses. Over at Mama Lena’s II, a loaf from the beloved bakery is used for the monstrosity that is the “Bomber” hoagie: Cooks pile on the filler of choice — steak and eggplant Parmesan are two options — before adding lettuce, cheese, dressing and other final touches. The resulting sub is toasted and jam-packed with ingredients and flavor.

Trust us — you’ll need to recruit the assistance of friends to tackle this hoagie, perhaps during Sunday’s kickoff Steelers game.

This article appears in the September 2013 issue of Eat Street.
Categories: PGHeats