This past weekend, the chef/owner of downtown spots Meat & Potatoes and Butcher and the Rye took over Churchview Farm, which presents a series of can’t-miss dinners. 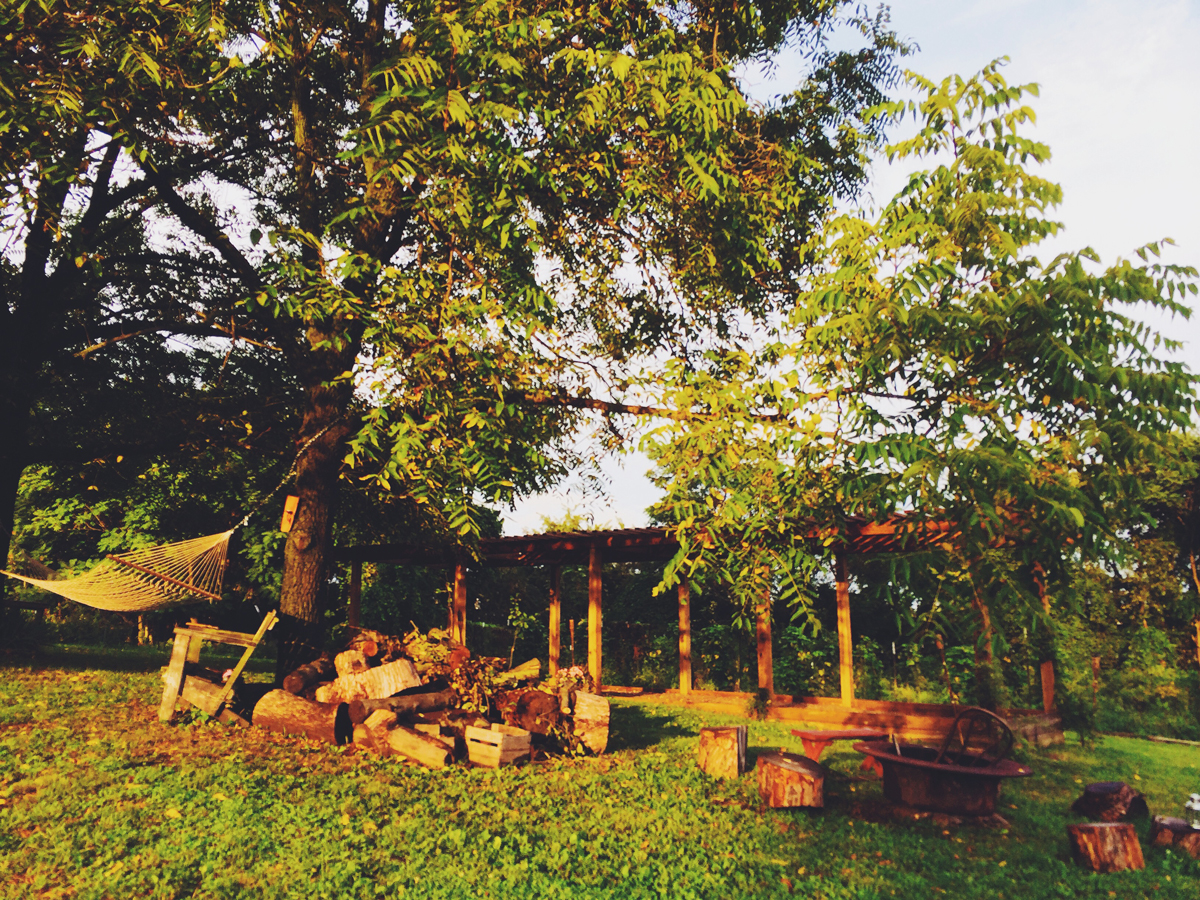 On the last Sunday of August, it’s gray and rainy. I start to worry about my plans for the evening. First, my friend who I was going to have dinner with has begged off. Second, I had “too much of a good time” at the Brew Gentlemen Garden Party in Braddock the night before. I am feeling the day-after effects of testing the limits of the Session Beer. Plus, there are two things I hate doing alone: eating dinner and watching movies. Because who will you talk to about how great (or awful) each dish or scene is?!

But there is no way I am missing a dinner at Churchview Farm. Doubly because I cannot miss the opportunity to see what Meat & Potatoes/Butcher and the Rye Executive Chef/Co-owner Richard DeShantz has up his sleeve for an all-vegetarian dinner. I lamented my solo flight but was comforted as soon as I got to the farm, where I was greeted by sparkling wine and all manner of familiar faces. Why did I ever think I was going to be alone? How could I have forgotten that, in this city, it actually is harder to find a place where you don’t know anyone? That’s one of the things I love about Pittsburgh.

At 6:30, I stood in anticipation surrounded by friends in a sweet swath of lush land lovingly farmed by Queen Bee Tara Rokacy and her crew. Everyone who has gone to a Churchview dinner has raved about it. And as farm dinners go — more and more of them are popping up — Churchview’s farmette feasts are the ones you don’t want to miss.

Chef DeShantz introduced his crew. I was happy to see Mike Mills was along for the ride, pairing the dishes with his stellar cocktails. After a brief farm tour, we all proceeded to the barn. I loved the palpable collective anticipation of the intoxicating pleasure that is the inevitable consequence of good food, libations and great conversation. I found myself seated next to my rock-star friend, Jennifer Baron of The Garment District. As far as I was concerned, this evening was off to the best start.

As someone who loves veggies, I always have great expectations from vegetarian dinners. Especially those made by non-vegetarian chefs. In fact, one of the best meals I’ve ever had in Pittsburgh was last year at Kevin Sousa’s Vegetable Tables at Harvard & Highland. Tonight’s dinner has the added bonus of being in high season at a farm that churns out some of the best produce in the city.

Mike Mills started us off with a Michelada so good I couldn’t heed his request to not finish the drink just yet. Because, you know, it was supposed to PAIR with the first two dishes. Sorry, not sorry! With black pepper, soy sauce, Worcestershire and sriracha in a mason jar glass lined with salt, celery seed and a little cayenne, it was savory and completely refreshing at the same time. I need another one, you know, to make this “pairing” business work. 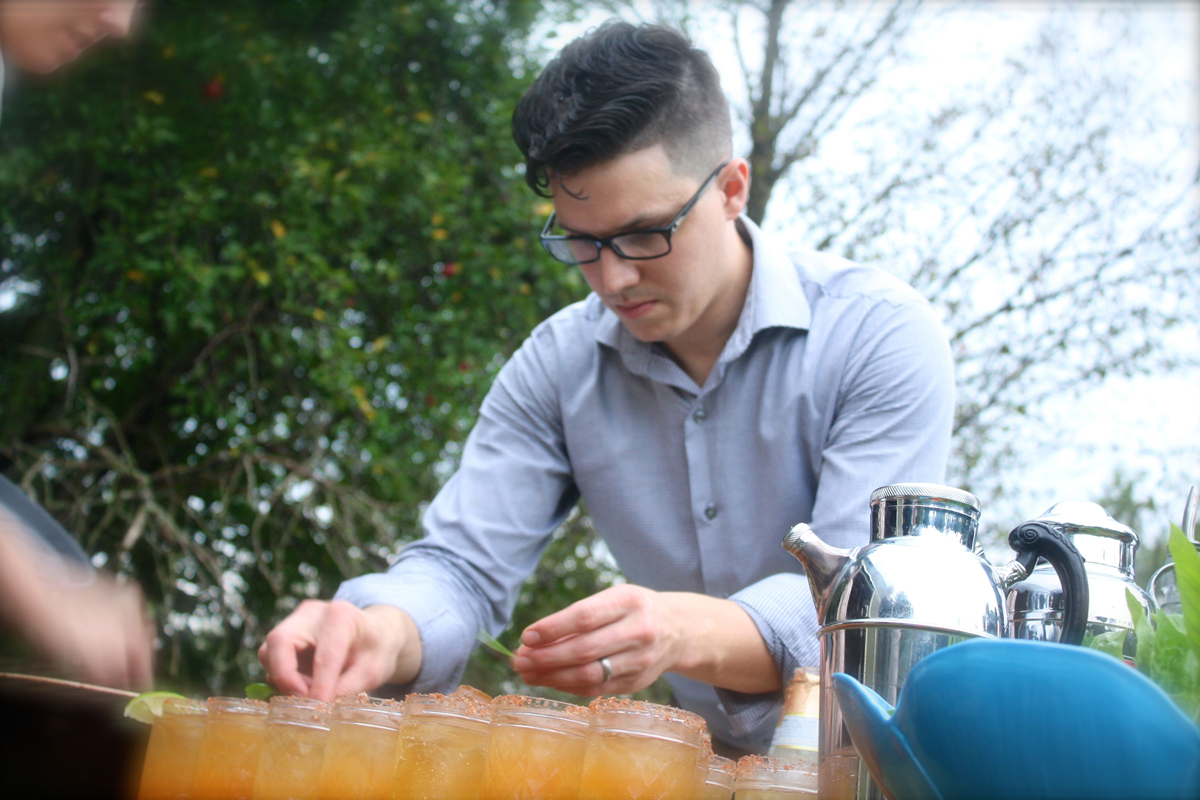 The first dish was a tomato terrine with pickled Swiss chard and wood sorrel over a “caramel” made with olives. Less of a terrine than a composed salad, the dish was the perfect start. The pickled Swiss chard and the sweet-salty caramel were divine and provided the perfect complication for the simple dish. The second course could do no wrong: Tijuana street Brussels sprouts. Roasted, charred sprouts accompanied by what traditionally would be on elotes (grilled corn often sold in the streets in Mexico) chipotle aioli, cotija cheese, chili and lime. I love roasted Brussels sprouts so much that if I had just had this and the Micheladas, I would have gone home happy. 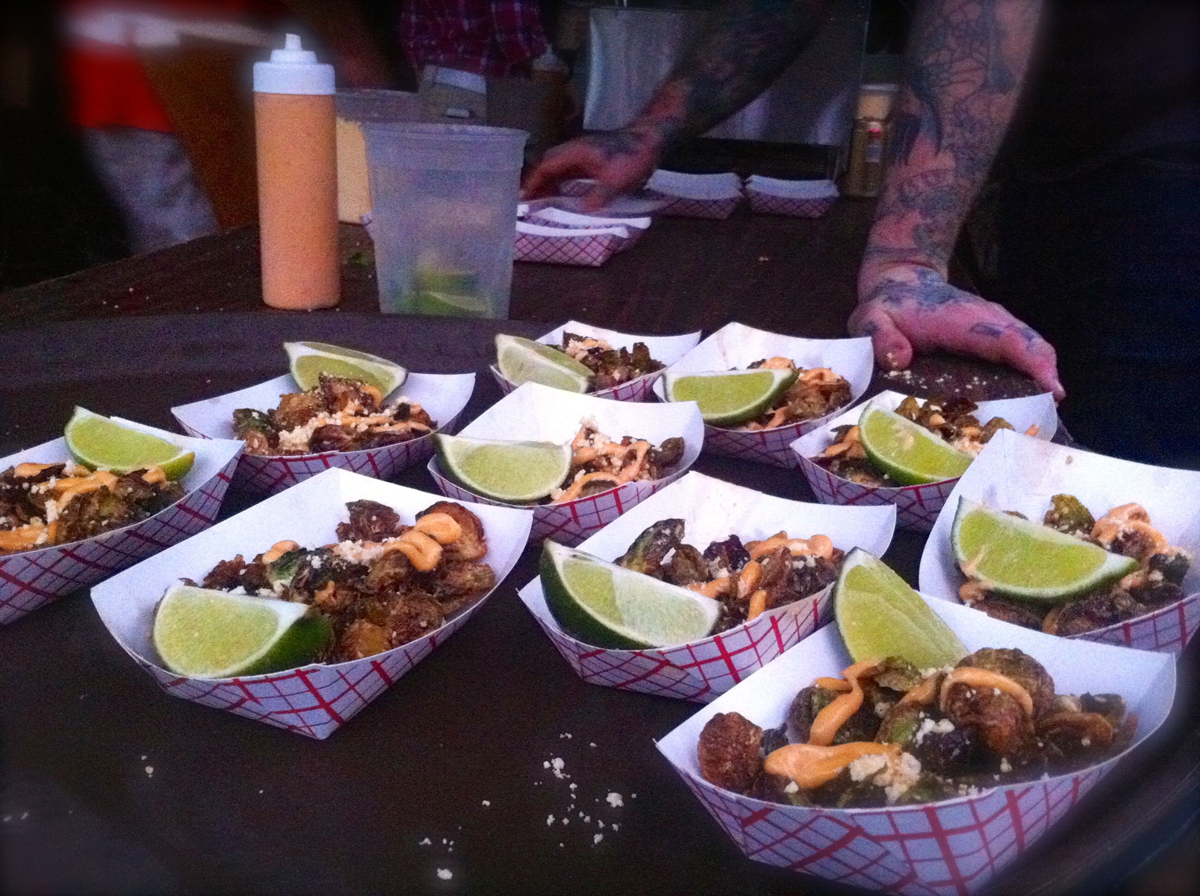 
I was getting full at this point — but we had six more dishes to go. Oy! #FirstWorldProblems

I looked outside on this lazy summer evening, and the sun was setting. The chefs were working outside under a tent lit by the headlights of a pick-up a truck. The scene could not have been more romantic. 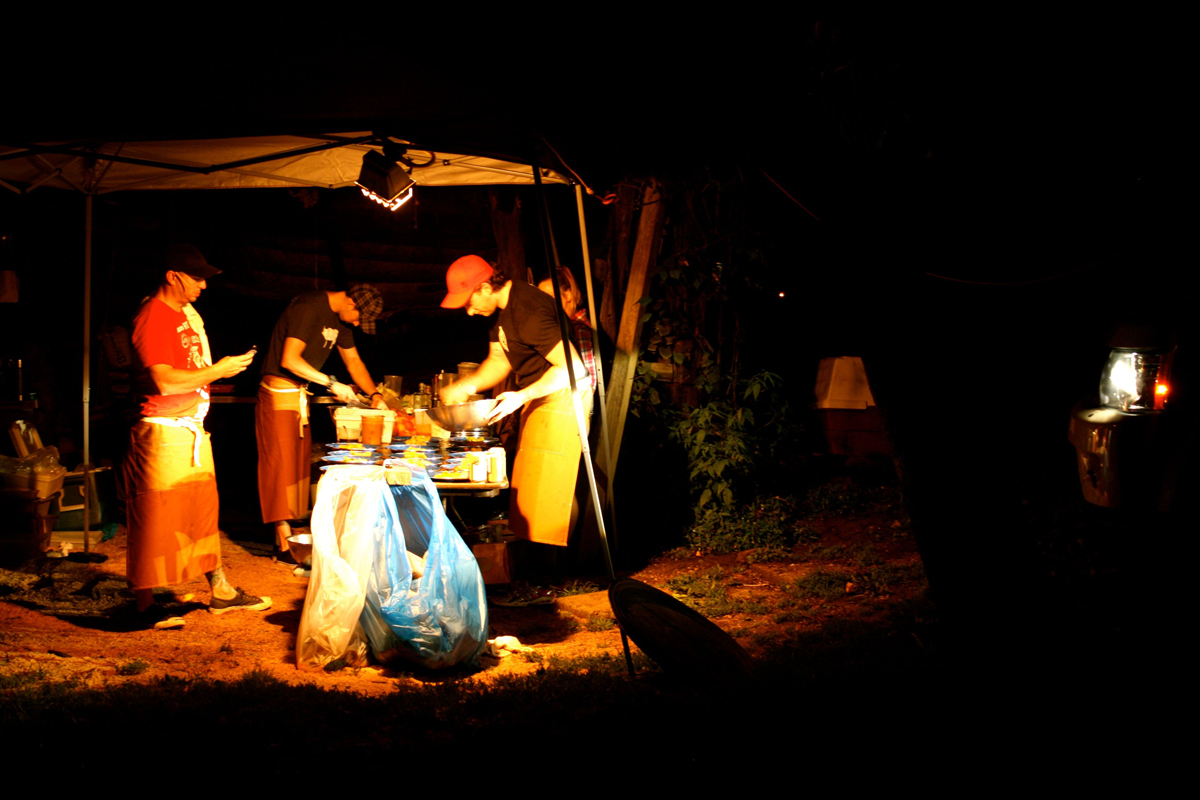 
One dish after another came and went, each pair accompanied by a new cocktail. 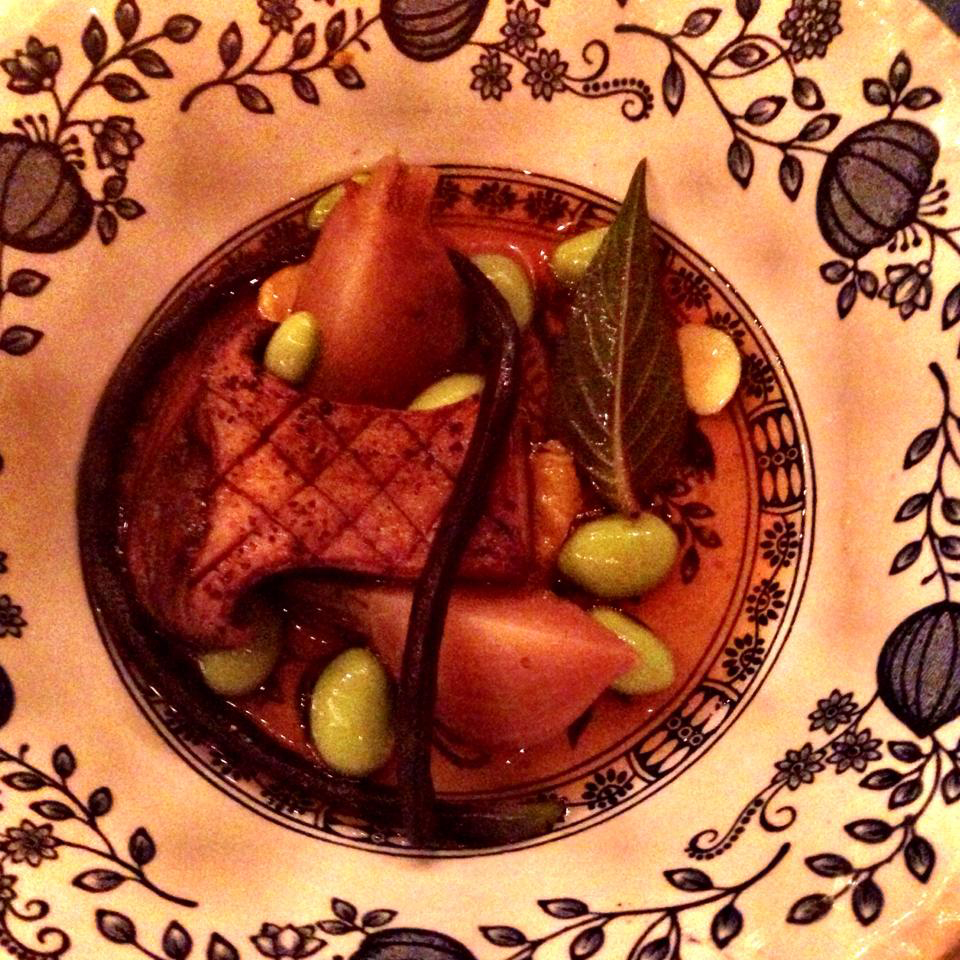 
Let me take a pause and talk about what makes a great main course that celebrates vegetables: Umami. It is the fifth taste that gives us the satisfying flavor and mouthfeel that is extremely elusive. Meat and cheese easily gives us this hit. With vegetables, it’s not as straightforward. There are vegetables that naturally are high in “umami” factor — including tomatoes and mushrooms (let’s call them vegetables for this purpose). The other dependable routes to raising that factor: fermentation, pickling and infusion or concentration. The dashi had a lot going on — the mushrooms were smoked in a dish that had miso and soy sauce (both fermented). And it had nori, a sea vegetable, for added kick.

All vegetables, no cheese and all kinds of mind-blowing on the palate.

Mike Mills made this dish even more fun with the Sosuke Sour, which I immediately loved for being named after a character in one of my favorite Miyazaki films. Made with sake, Yamazaki whiskey, Hophead vodka and yuzu, it went toe to toe with the Japanese-inspired dashi.

Eight dishes and four hours later, we were post-feast tired and sated. Everyone was glowing and a little flushed from the combination of food, cocktails, evening dew and stimulating company.

The wonderful thing? All Churchview Farm dinners are just as wonderful. Each season, the series is one of the most-awaited. It definitely has become a Pittsburgh summer classic.