The nonprofit also is partnering with Wigle Whiskey to raise money and produce a new drink. 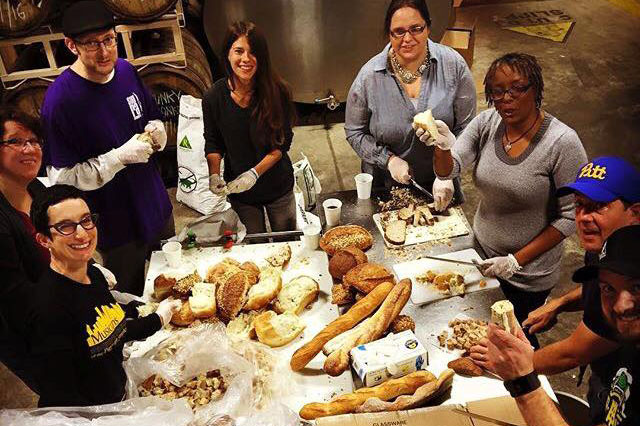 photo courtesy of the 412 food rescue

Stale bread can be turned into potentially great beer. Volunteers at the 412 Food Rescue are putting that theory to the test after recently collecting old bread from Five Points Artisan Bakeshop and delivering it to East End Brewing. Once delivered, the volunteers broke apart the loafs for the fermentation process.

In a couple of weeks, the beer –– appropriately named Loaf –– will be sold in growlers at East End Brewing locations in Larimer and the Strip District.

“Bread is one of the most wasted foods in the developed world and is one of the biggest food items we receive. Sometimes we receive too much of it — which is what inspired LOAF. It’s a way for us to prevent stale bread from entering the waste stream and at the same time launch a conversation starter about food waste! I talked to Scott (Smith, owner of East End Brewing) about it and he shared how they actually tried a similar project last year (when) making a Russian-style kvass,” says Leah Lizarondo, CEO and co-founder of 412 Food Rescue.

In another food-saving effort, volunteers collected 2,500 pounds of unharvested apples from trees around the city. The apples were delivered to Wigle Whiskey which is distilling into a Pommeau –– an alcoholic beverage made by combining apple brandy and apple cider. The drink will be named Forage.

“We wanted to glean apples from the ‘urban wild,’ but we knew we were going to get a lot that were not fit for eating. I talked to Meredith (Grelli, co-owner of Wigle Whiskey) about making something with them, and that's when she came up with the idea for Pittsburgh's first Pommeau,” says Lizarondo.

“We think both are great ways to advocate and spread the word about wasted food without the lecture — more fun to talk about it over a (relevant) drink,” she adds.

Learn more about how to order either beverage at 412 Food Rescue’s website.