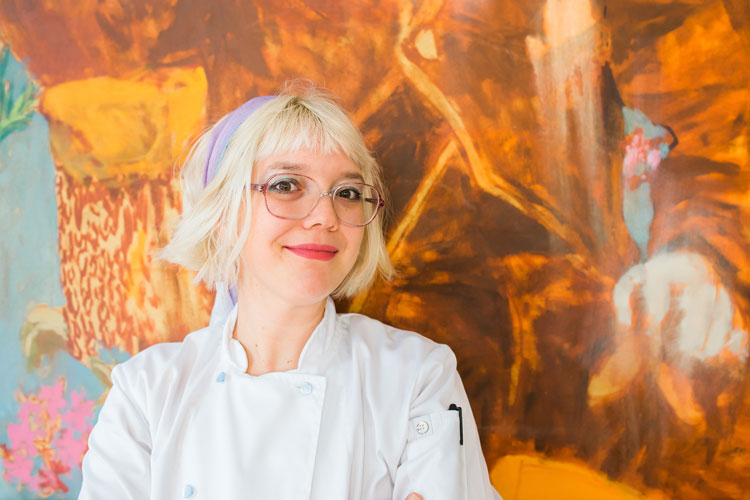 Whitfield pastry chef Casey Renee strikes a balance between frenetic creativity and high-caliber culinary pedigree to create the best desserts in the region. You might even consider something nearly unheard of with after-dinner treats — ordering seconds.

Take something as outwardly basic as a chocolate chip cookie. It’s a ubiquitous treat, not too hard to make and almost always nice to eat, yet rarely transportive. With Renee, a two-time-running James Beard Outstanding Pastry Chef award semifinalist, it is. She uses a pinch more salt than a home cook would feel comfortable with, the best chocolate she can find and top-shelf vanilla beans. Her finishing touch is a perfect under-bake, which means pulling the cookies from the oven in a liminal state between liquid and solid.

In 2011, Renee left a job as a media buyer in New York City to attend the Natural Gourmet Institute in Manhattan. She worked for a handful of restaurants and catering businesses prior to landing a gig working for David Chang at his lauded Momofuku Noodle Bar; later, she moved to Momofuku Ko, Chang’s two-Michelin star restaurant. It was at ko where Renee began working primarily in pastry and where she unlocked the door to her creative culinary mind.

The four chefs at ko were expected to prepare two amuse bouche per shift with whatever ingredients they had on hand. “Creativity is a muscle. The more you use it, the easier it is. It took a couple of years to force myself to use it every day,” she says.

Her next position, as pastry cook and then sous chef to Brooks Headley, then the groundbreaking executive pastry chef of Del Posto (now chef/owner of Superiority Burger in the East Village), gave her what she says was a decade’s worth of technical training in a single year.

Longing to live in a smaller city, she decided to return home to Pittsburgh. A prior connection with fellow Pittsburgher Brent Young (The Meat Hook) proved fortuitous; he was looking for chefs for a new project.

Renee finds inspiration observing the world around her and by reading books such as “Big Magic: Creative Living Beyond Fear,” by Elizabeth Gilbert. A midnight thought doesn’t slip into the aether. “Something will hit me and I’ll say to myself, ‘Write that down. Right now.’”

Then it’s time to hone in. “A lot of times, I’ll have an idea and I don’t know where it’s going to go, but I need to start making it. And the idea then starts leading me to where it should be and I’ll figure it out,” she says.

Lemon sundae began with a late-night inspiration to craft a lemon and coconut dessert but morphed into something else when the lemon and coconut pairing wasn’t as harmonious as envisioned. “I went all over the world with that one,” she says.

Lemon ice cream instead ended up in a lace-cookie waffle cone, but it needed more. She tried putting herbs all over it and tarragon popped as a match, but tarragon sugar didn’t work. She felt defeated. And then she saw Martha Stewart make a granita, so she tried tarragon granita; the intensity of the flavor stood up to and complemented the lemon. “When I ate it, it was everything. I knew it was done,” she says.

At 33, she’s still has a lot of sugar to spin. In addition to her day-to-day work at Whitfield, Renee is crafting fabulous wedding cakes for the hotel and this month introduces a recurring whimsical tea party experience with local artist Thommy Conroy.  “I have a lot of things I want to do in this world. Visions are forming in my head for the future right now,” she says.