Carrie Clayton and Spencer Warren are Stirring Things Up 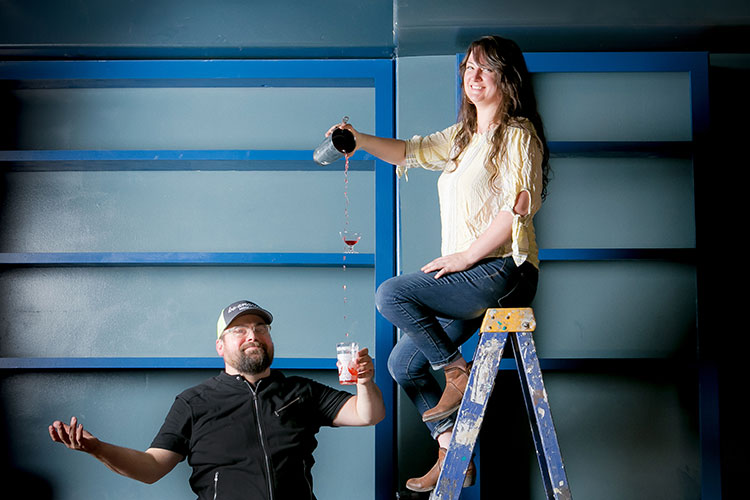 It took a small Miracle to get two of the foundational figures in Pittsburgh’s cocktail revolution to join forces.

Carrie Clayton and Spencer Warren had been collaborating on a new venture called Subversive Cocktails, but it was Miracle, a holiday-themed, line-around-the-block popup that ran last winter (and will reappear this year) that convinced them they should jump full-force with their budding business.

Not that either of them needed any validation of their professional acumen.

Clayton started bartending in 2003 and was instrumental in the development of bar programs at Bar Marco, The Livermore and Poros. Warren widely is credited with helping to push Pittsburgh craft cocktails into the modern era as owner of Embury; he later helped develop the bar programs at Acacia, Butcher and the Rye and täkō.

The duo began working together when Warren filled in behind the bar at Poros after Clayton injured her arm (she continued to work as the restaurant’s bar manager). Clayton also began helping Warren with his “Popup Embury” events. “Then we got this consulting gig. And this event. And this wedding,” Warren says.

“Suddenly, we were so busy I wasn’t working anywhere else anymore,” says Clayton, who at the time was picking up a few shifts per week at Smallman Galley.

Clayton and Warren have a collaborative process of cocktail creation. “We’ll sit with our notebooks and talk about what ideas we have. We’ll come up with a list of things we think will work. Then, we’ll read and write about what we’re doing. And then, we start playing with ingredients to make it all come together,” Clayton says.

A wedding cocktail list might start with a color and a theme. A large-scale event such as the Red Bull Flugtag requires batched cocktails for quick turnover and, of course, Red Bull. Themed popup nights can become a laboratory to experiment because the self-selecting audience is more willing to try something new.

Now, after countless events, as well as developing the cocktail menus for Pittsburgh restaurants such as Mindful Brewing, Tres Rios, Casellula @ Alphabet City and Il Pizzaiolo, Subversive Cocktails is going to become part of the establishment … by opening an establishment. This month, Clayton and Warren are expected to unveil Mr. Rogers, A Neighborhood Bar and Penn Cove Eatery Downtown.

The two always seem to be riding right inside the pocket of what’s current, something Clayton attributes to reading, talking and traveling. “We’re playing around with flavors that are interesting but finding a way to make them approachable, and also doing things that people find familiar in an exciting way, or done exactly as it should be,” she says.

That philosophy will be represented on the small, sometimes changing cocktail menu that’s a synthesis of what they’ve brought to town the past few years. But there will be something else, too, that’s reflective of their long careers.

“Not everyone coming in will want to see cocktail geek stuff. But it’ll be there, in a binder,” Clayton says.