Carlow University Students Are Ready to Create and Serve

The university annually hosts “Bowls in the Night,” a pottery marathon that invites local artists and students to create bowls for the Empty Bowls event in March. 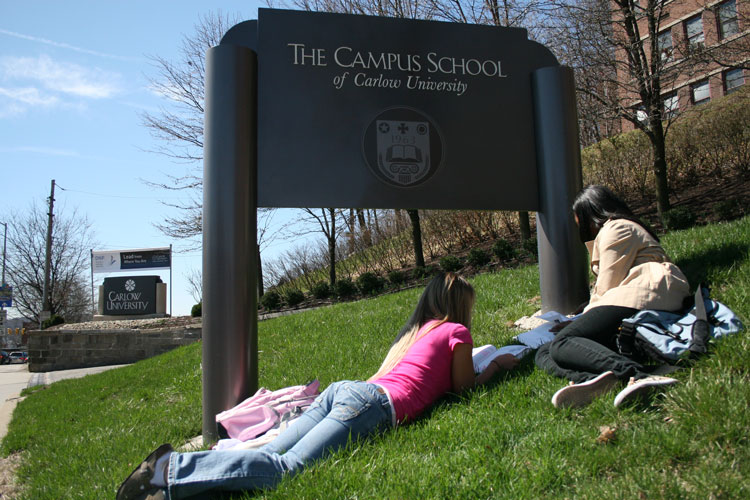 SERVING OTHERS: CARLOW TO HOST ANNUAL BOWLS IN THE NIGHT EVENT
By the end of Carlow University’s annual “Bowls in the Night” pottery marathon, local artists and students are aiming to have created about 200 bowls, which they hope will be empty for the last time. The clay bowls created during the event on Thursday, Feb. 5 will be used for the Greater Pittsburgh Community Food Bank and Just Harvest’s Empty Bowls Hunger Awareness Dinner. Students and artists will craft the bowls at pottery wheels from 5 p.m. until 1 a.m. on Thursday at the ceramics studio in Antonian Hall on Carlow's campus, and the bowls will be used to serve meals at the 20th annual Empty Bowls dinner on March 29 at Rodef Shalom Congregation in Oakland. The event has raised more than $500,000 since its start, but Dale Huffman, who hosts the marathon each year and has been teaching art at Carlow since 1996, sees it also as a learning experience for the students. “This event not only benefits an incredibly worthy cause," Huffman said in a statement, “but it is also an opportunity for the students to learn how to use their talents outside of the classroom to serve others.”

SETON HILL REMEMBERS MLK WITH SALA UDIN SPEECH
In commemoration of Dr. Martin Luther King Jr.’s birthday, former Pittsburgh City Councilman Sala Udin will speak at Seton Hill’s Cecilian Hall on Thursday, Feb. 5. The university’s Martin Luther King Jr. Celebration Task Force organized “The Dream Still Lives,” highlighted by Udin as the keynote speaker. Udin, who spoke to Pittsburgh Magazine for February’s “Welcome to The New Pittsburgh” feature, will share memories of his experience as a civil-rights activist not only in Pittsburgh but also across the country. He participated in the March on Washington in 1963, joined the Freedom Riders in the Mississippi Delta and returned to Pittsburgh, where he became involved with such projects as the establishment of the August Wilson Center for African American Culture. Seton Hill students are encouraged to attend the event, but it is not open to the public.

BIG ACHIEVEMENT FOR PITT’S STEVEN LITTLE
Steven Little has plenty of titles: PhD, associate professor, CNG Faculty Fellow and Chair of Chemical and Petroleum Engineering at the University of Pittsburgh’s Swanson School of Engineering and one of Pittsburgh Magazine’s 40 Under 40 honorees for 2014. Now Little has one more to add to that list: recipient of the 2015 Curtis W. McGraw Research Award. Presented by the American Society of Engineering Education, the award recognizes “outstanding early achievements by young engineering college researchers 40 years of age and younger, and to encourage the continuance of such productivity.” Little was chosen for, among many accomplishments, his contributions to the field of controlled release as well as his work in the nascent field of biomimetic delivery (imitating models, systems and elements of nature to solve human problems). Little will receive the award at the Engineering Research Council’s annual conference March 9-11 in Silver Spring, Md.

This article appears in the February 2015 issue of Great Minds.
Categories: Great Minds