Can Buy Me Love

Moon Township’s Milana “Mim” Bizic owns a romantic collection of 1800s love tokens: coins that were polished, engraved and given to young ladies by their suitors.

For Valentine’s Day, the thought of giving money as a gift seems terribly unromantic and impersonal. But in the mid- to late-1800s, money could be the most romantic and personal of gifts—if it had a certain twist.

Milana “Mim” Bizic of Moon Township collects love tokens, which are coins from the Victorian era and earlier that were smoothed down on one side to a flat finish then beautifully engraved (usually by a jeweler) and given as a token of love.

The practice of creating and giving love tokens began in England in the 17th century, but reached its greatest popularity in the United States in the 1880s. Bizic says all denominations were used, including pennies, quarters and even gold pieces, but the most common were Seated Liberty Dimes: 10-cent silver pieces that feature an image of a seated woman holding a flag and a shield that reads, “Liberty.”
“A dime was an average day’s wages back when the love tokens were popular,” Bizic explains. “Also, silver was softer and easier to engrave than copper or nickel.”

Bizic loves the history of the pieces, and she has quite a history herself. The South Side native who is the child of Serbian-American parents is well-known locally as an authority on Serbian-American history and culture. Bizic has worked for the federal departments of Energy and Commerce, including a job in the U.S. Patent Office. She was also involved in the Internet in the technology’s infancy around 1985, and worked for Apple helping to develop ways computers could be used in education. Her favorite job, though, was as a teacher in the Quaker Valley School District, a position she held from 1969 until 2004, and she still keeps in touch with many students on Facebook. 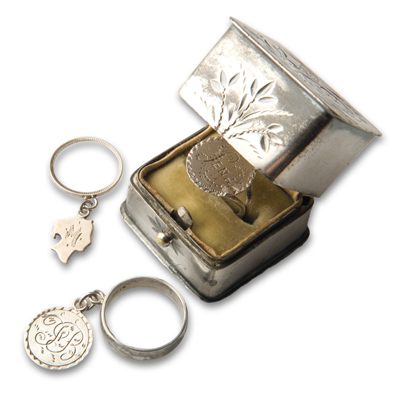 As a devotee of history, Bizic says she was always interested in coins and stamps—not because of their value, but because they gave her a way to teach about and connect with history. “I couldn’t afford the real collectible coins, and when I saw the love tokens, I fell in love with them,” Bizic says. “Each one told a story.” She finds the tokens at antiques shows, and flea markets and has received some as gifts. The most common love-token engravings are monograms, followed by two intertwined initials (representing two lovers), full names, phrases, birds or animals and scenes such as homes or landscapes.

Because of her scholarly nature, Bizic has become an expert on love tokens, giving presentations at national conventions for the American Numismatic Society. But it’s the personal history of each that gives her the most pleasure.

The tokens strung on bracelets or other jewelry are the rarest collectibles she owns. “Girls collected love tokens like girls in future generations would collect charms for a charm bracelet,” Bizic explains. Some tokens were engraved by sailors and given to girls they met in foreign ports (wink); others were given to parents, and love tokens were common gifts from convicts with inscriptions like this: “May the rose of England never bud, the thistle of Scotland never grow, the harp of Ireland never play ’til I, poor convict, gain my liberty.”

Bizic’s favorite token in her collection is the Lord’s Prayer meticulously inscribed on a gold piece smaller than a modern dime. Alas, love tokens became too popular to survive. So many coins were being taken out of circulation for love tokens that in 1909 a U.S. law was passed making it illegal to mutilate coins.

For Bizic, though, who says, “I think we’ve lost a little bit of romanticism in our hectic lives,” love tokens, like love itself, will never die.

For additional photos of Mim’s collection, see gallery at bottom of page.

This article appears in the February 2010 issue of Pittsburgh Magazine.
Categories: Arts & Entertainment