A trumpet virtuoso who has played with jazz legends the likes of Dizzy Gillespie, Lionel Hampton and Doc Severinsen, as well as a lead actor in a Broadway musical, Stripling is not your typical conductor. 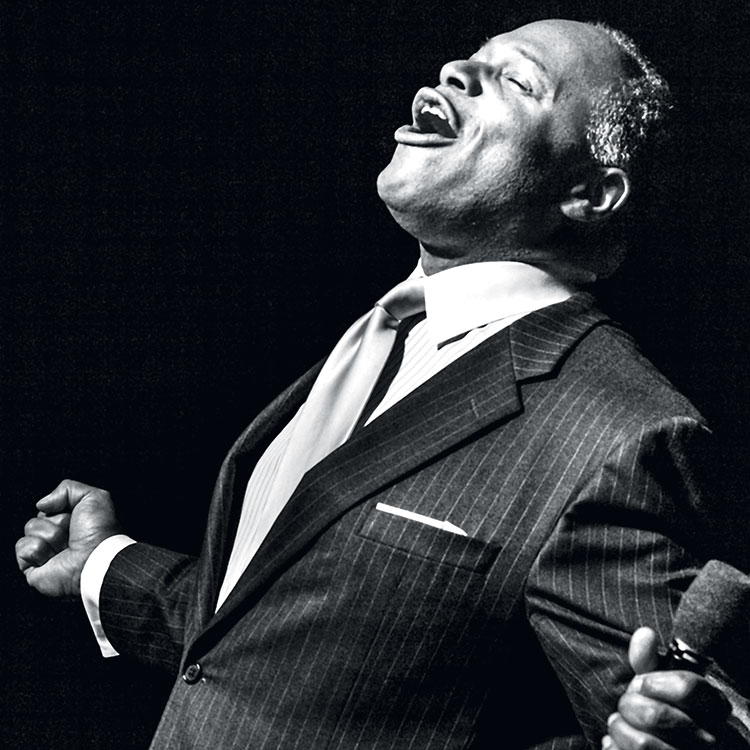 Byron Stripling has his arms wide open, head tilted back and eyes closed, with a smile that would reach to the back of any concert hall.

“It’s my signal to the audience to come into this music,” he says with characteristic enthusiasm. “When I turn around to the orchestra, they have to feel that — the entire program has to have openness and love, power and joy.”

Stripling’s “open heart” gesture comes through even over video from his house in Columbus, although it only serves to heighten the frustration that concerts aren’t happening anytime soon. Stripling can hardly stand it. “We get our lifeblood from playing, and we know we can deliver happiness if we can just let people hear our music.”

A heralded trumpet virtuoso who has played with jazz legends such as Dizzy Gillespie, Lionel Hampton and Doc Severinsen, been a lead actor in a Broadway musical, appeared on many recordings and has been known to sing and scat in rehearsals to get his point across, Stripling is not your typical conductor. 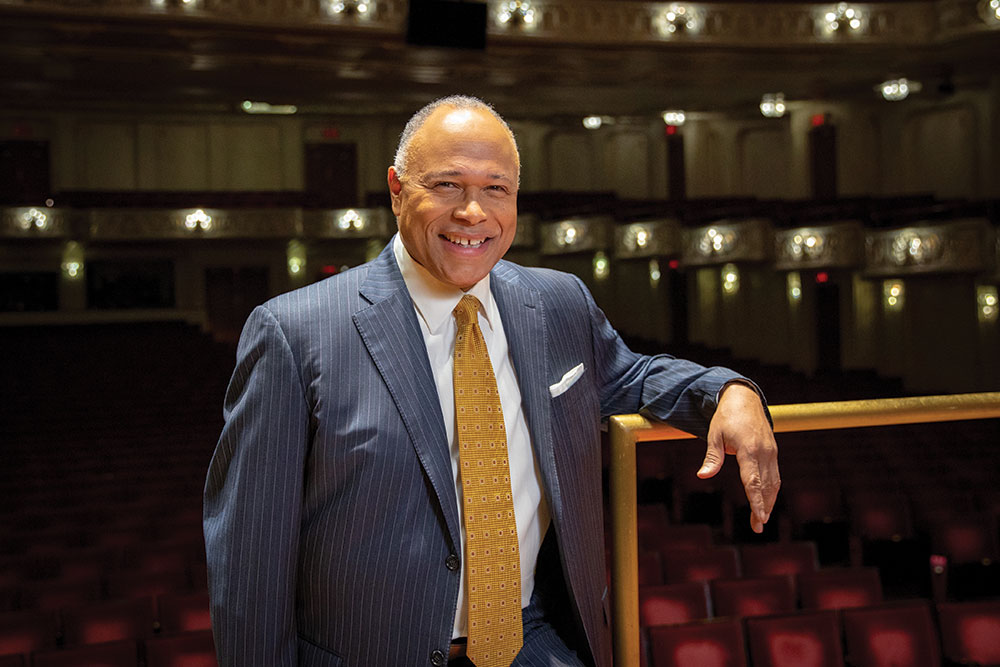 The Pittsburgh Symphony Orchestra is counting on that. Earlier this year, the PSO tapped the 59-year-old to be its first principal pops conductor since the post was held by another multifaceted artist, Marvin Hamlisch.

“He has a huge personality, full of ebullience,” says Keith Lockhart, the longtime director of the famed Boston Pops. “He sweeps into the room with a big smile and all heads turn.”

“Byron is a first-rate gentleman and fabulous musician,” says Severinsen. “Pittsburgh is lucky.”

After Hamlisch’s sudden death in 2012, it took several years for the PSO to start a serious search. “Filling Marvin’s shoes certainly wasn’t something we wanted to jump into,” says Melia Tourangeau, the orchestra’s CEO. But the orchestra did know that it wanted similar qualities in his successor: a top musician who would build a longstanding relationship with audiences through charisma as much as programming. Not to mention fundraising.

“As principal pops conductor, you are an important part of outreach,” says Lockhart. “You need to be more than a smart musician — you must be a smart communicator. Byron is just that.” 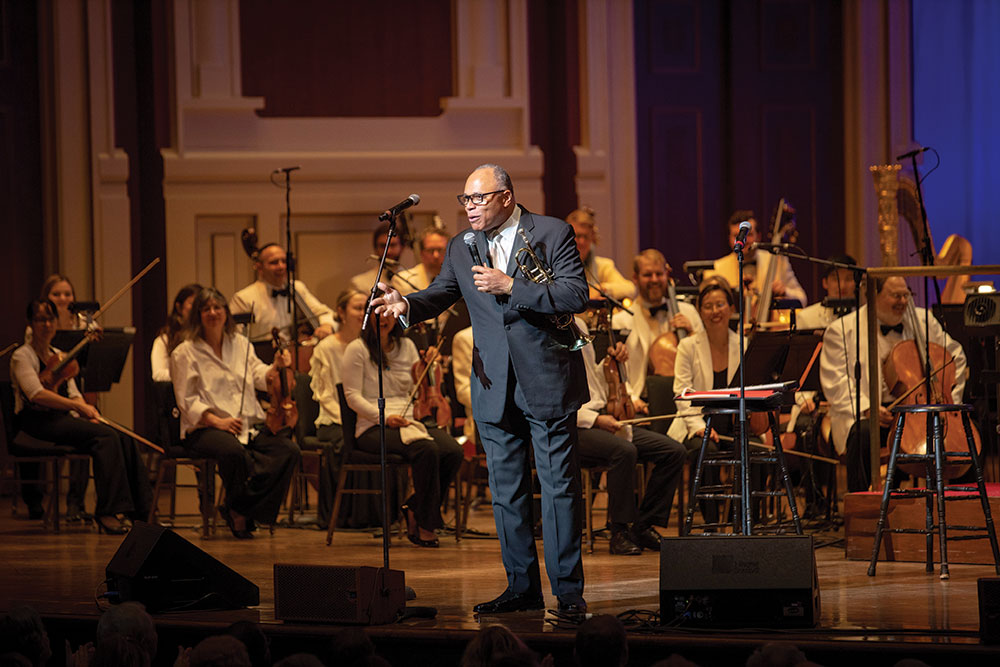 A LIFETIME OF EXPERIENCE

Stripling’s parents were passionate about music, fed by his father’s career as a baritone, music teacher and choir director. “When your dad is the director, you automatically sing in the choir — whatever part is needed!” he jokes. The family moved all over the country: Georgia, Colorado, Minnesota, Kentucky, Missouri and Texas. “It allowed me to appreciate the differences in places, people and things.”

Yet it was not his parents, but the family turntable that pulled him into music. “An endless soundtrack of great classical, jazz, pop, soul and beyond echoed throughout our house.” Trumpet was in heavy rotation; listening to Louis Armstrong, Miles Davis, Al Hirt, Severinsen, Gillespie and many more left him with the need, want and desire to pick up the instrument. “It was more of a calling than anything.”

Stripling followed that beacon through countless hours of practicing and performing all the way to the Eastman School of Music in Rochester, N.Y., where he established himself as a top talent and serious extrovert. “Byron was a superstar at Eastman,” says Chris Wu, a violinist in the PSO who studied there. “It gave us all hope to see someone become so successful.”

Actually, Stripling wasn’t quite the best example; he left school before graduating. But when you get an offer from Lionel Hampton, you don’t say no.

“I figured the school would always be there, but Lionel was already an historic jazz musician and I needed to take immediate action to be on stage with him!” he says. It was Hampton who cultivated his voice, including how to be himself when playing the music of his idols, especially Louis Armstrong. Once, Hampton asked the young virtuoso to play “When You’re Smiling (The Whole World Smiles with You)” with him. “He said, ‘Do your own thing, but give the spirit of Louis,’” says Stripling. “That is when I first got how to be influenced without copying.”

That experience would pay dividends later when Stripling won the lead role in the musical “Satchmo.” To prepare, he went all in, studying with an acting coach to immerse himself in Armstrong’s mannerisms. The show’s run was short, but Stripling likes to slip back into that headspace whenever playing Armstrong in jazz or pops concerts.

Touring with Hampton led to a torrent of gigs, including with the Count Basie Orchestra, Woody Herman (who called him Lord Byron), the Lincoln Center Jazz Orchestra, Carnegie Hall Jazz Band, not to mention many jazz recordings, pop albums, Broadway soundtracks and even television spots. Stripling particularly enjoyed his time touring with Gillespie. “We talked food, girls and old musicians, and he would tell me who I should know and who I should listen to.”

Amid all of his studio work and concerts, Stripling appeared as a guest soloist at Carnegie Hall with Skitch Henderson’s New York Pops orchestra. Soon after, he found himself invited to perform with orchestras around the world. From there, it was natural to take the step up to the podium, whether in pops programs or with his own ensemble, the Columbus Jazz Orchestra, which he has led since 2003. It was there that he won over the PSO, first with a program of Ella Fitzgerald and Armstrong in 2017 and then in a return engagement featuring the music of Nat King Cole in 2019. 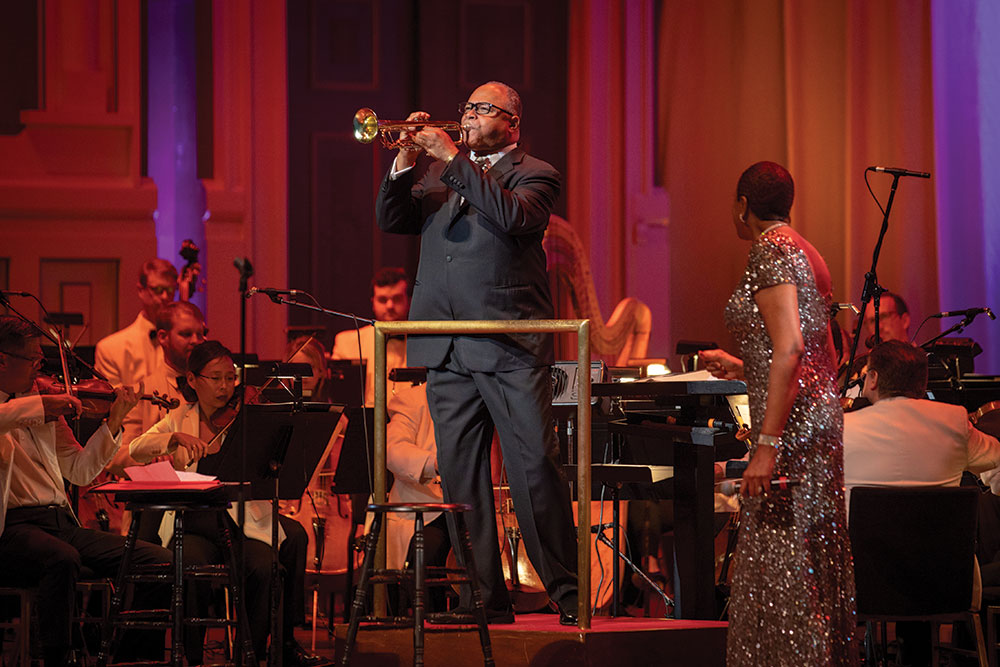 Now comes the hard part for Stripling: how to consistently fill the concert hall with people. That task has dogged programmers since orchestras could count on a ready audience looking for an alternative to the “serious” music of an orchestra’s main subscription series.

The Boston Pops exemplifies this. Created in the 1890s as an offshoot of the Boston Symphony, it became so famous that it didn’t need to sell itself. “Even when I showed up in 1995, all the marketing needed was a big poster that said ‘Tuesday Night: Boston Pops,’ or ‘Thursday Night: Boston Pops,’” says Lockhart. The program also didn’t change much over the distinguished tenures of Arthur Fielding and John Williams. “It was light classics, fanfares, Strauss waltzes, maybe a popular concerto by Mozart and lots of medleys from Broadway,” he says. “If you didn’t like that piece, you just waited for the next one.”

Eventually, the Boston Pops — and most pops iterations of orchestras — shifted from the potpourri model to thematic nights, such as Celtic music, Glenn Miller tunes, film scores or pop genres. “It became very specific and marketed as such, and that hasn’t changed much since,” says Lockhart.

“Having enough variety and balance is the trick,” says Tourangeau. A significant point in Stripling’s favor for the position is how well-versed he is in many different genres. “He celebrates all kinds of music.”

Severinsen expressed the same sentiment: “Whatever the theme of the show is, he will give it his own touch. He brings out the best in people.”

Among the thematic concerts Stripling would have conducted this season are one devoted to the Motown sound and a retrospective of Paul Simon hits. But the season opener would have put his best foot forward: The music of the jazz scene in New York City in the 1930s and ’40s. A program that he created and has presented with many pops orchestras, it re-creates the smoky, glitzy atmosphere of famous joints like the Cotton Club, the Savoy Ballroom and Minton’s Playhouse, brimming with music made famous by Armstrong, Duke Ellington, Lena Horn, Ella Fitzgerald and more. “People went to the nightclubs to be dazzled,” he says. “This show is not just about the music, but also the element of entertainment that those musicians knew was the central thing.” 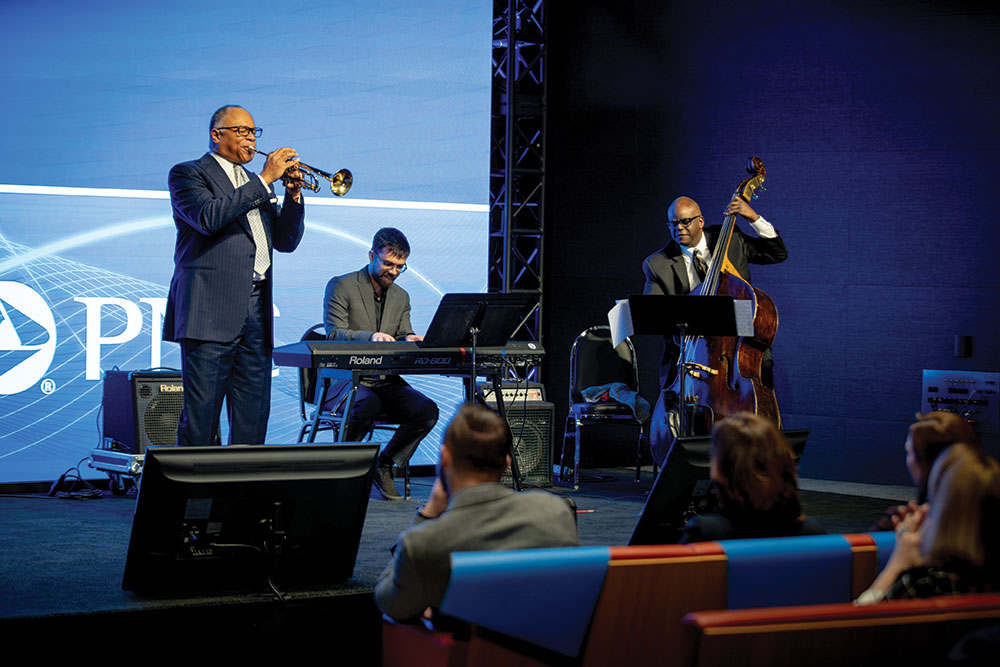 ‘A CHANCE TO UPLIFT PEOPLE’

Stripling will continue to live with his family in Columbus, but (when it is safe to do so) will frequently come to Pittsburgh to collaborate with local jazz ensembles and performers. He already has many fans in the orchestra itself, cultivated from his previous appearances in Heinz Hall. “I know he will do well here, and I am excited for the Byron Stripling era to begin,” says Wu.

When Stripling will be able to lead the PSO on stage remains uncertain, but when he does he yearns to show how music can heal in this time of heightened racial tension and political divisiveness.

“Art is the highest form of hope, and as art, music is the same,” he says with growing intensity as he shifts to address racism. “It is obviously very personal. I used to walk in Texas with my father, and the police would sometimes stop us in our own neighborhood, asking why we were walking around.”

The George Floyd video stirred up many thoughts. “I realized that could have been me, and I am mindful of that,” he says. “And I thought about the mass incarceration of Black men around the world. When I walk on the stage it is apparent I am a Black man. I can’t hide that! And of course, I don’t want to. But with that comes great responsibility.”

Here Stripling pauses and takes a breath before saying: “I have a chance to uplift people, like Louis Armstrong said, through the power of happiness, hope and joyous sounds. When I get my audience dancing and singing, at that moment we all are one. The music brings us all together, and we begin to see the humanity in each of us.”

Then that big, warm and infectious smile returns. “I feel I have been put on this earth to shine that bright light through music onto people.”

Andrew Druckenbrod greatly enjoyed his time as a classical music critic at the Pittsburgh Post-Gazette and Minneapolis Star Tribune, but loves that he can listen to what he wants now.