Move over neckties; there’s a new trend in town.

Bow ties are a classic that have gone from geek to chic, and these bow tie-loving couples and their bridal parties show off the trend in style. 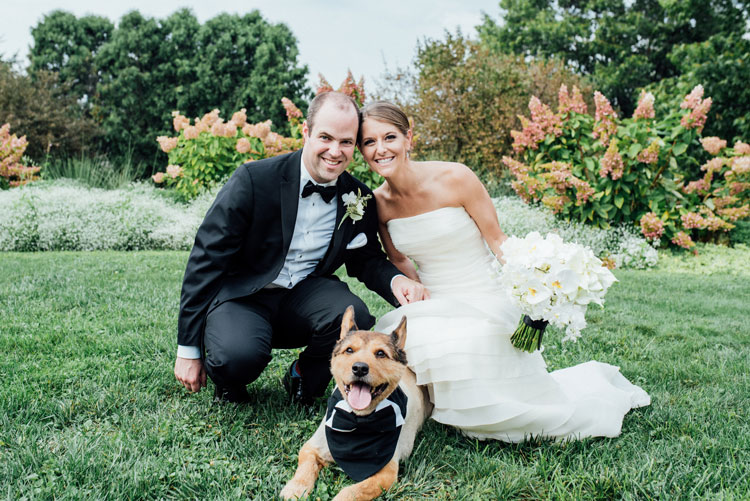 “Our wedding was black tie, and I thought bow ties were the better option,” she says. “I just think it looks better.” 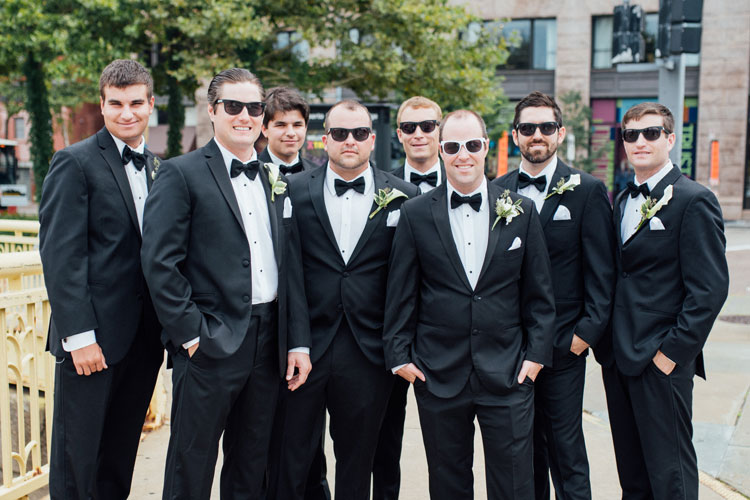 For her wedding to Corey Bruce, the groomsmen wore bow ties from Men’s Warehouse. But humans weren’t the only stylish members of the wedding party. The couple’s dog, Cody, served as the ring bearer and rocked his own bow tie from Etsy. 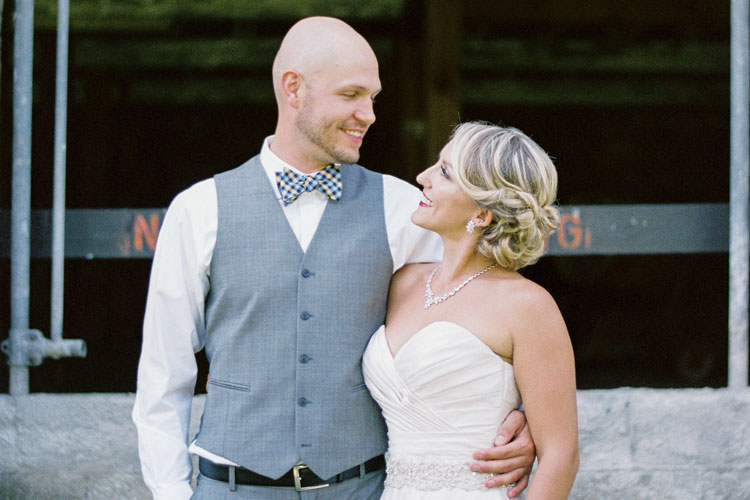 Grant Butson has a strong sense of individual style, so putting his own personal touch on the groomsmen’s outfits was a must. He’s a huge fan of bow ties, and it would’ve been wrong for his friends to wear anything other than PF Flyers.

“As far as I know, some of them still wear the shoes,” his wife, Anna Bernat, says. “They get a huge kick out of them.”

When it came to the ties, Grant loved a pattern on a regular tie he noticed in a store, but it didn’t come in a bow tie.

“I said, ‘OK, don’t settle. I’m going to do some research,’” Anna says. “And I managed to find the exact same thing online.” 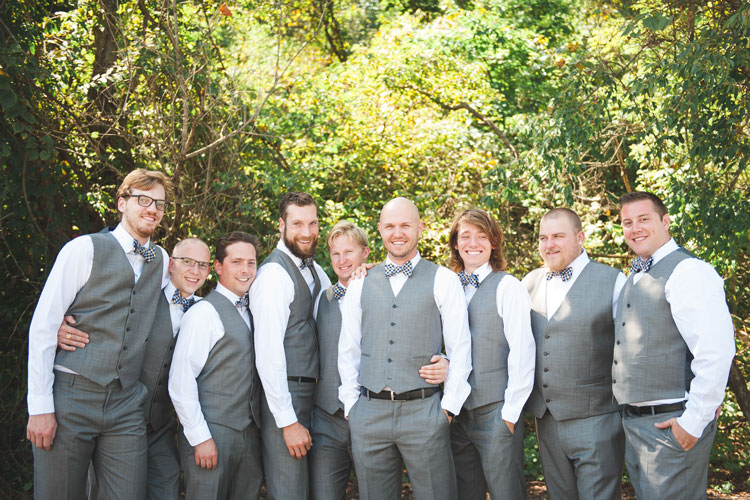 They purchased the bow ties from The Tie Bar, which specializes in ties and other men’s accessories. Paired with gray vests and pants, the groomsmen’s outfits as stylish as the groom wanted. 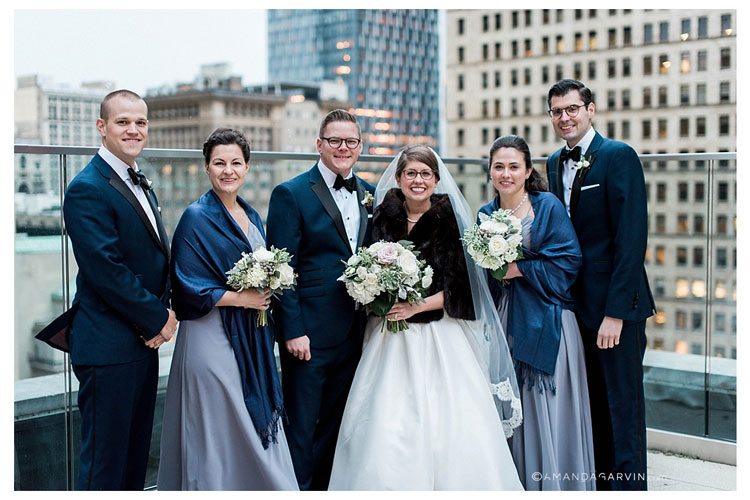 “He wears a bow tie to every formal event we attend, so there was really no question as to what he would wear for our wedding,” his wife, Krista Herald, says. 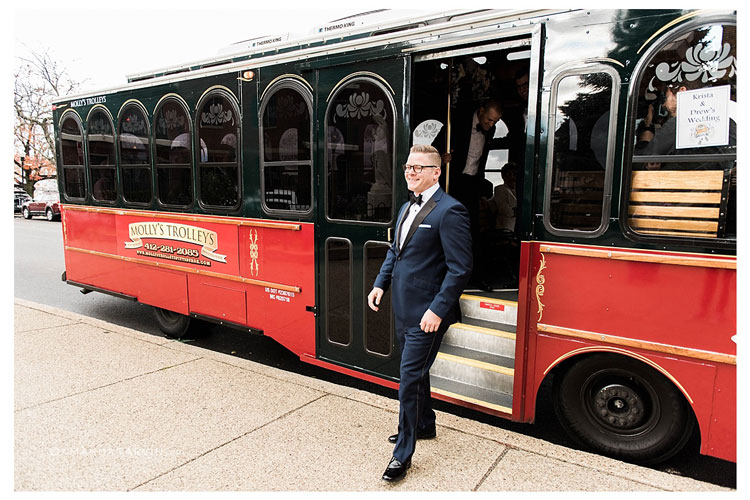 Krista and Drew held their reception at Hotel Monaco, Downtown, and balanced the modern look of the venue with a simple and classic wardrobe for their bridal party. Drew’s groomsmen wore navy blue tuxedos and self-tying bow ties from F.L Crooks & Co. in Clarion.

“A friend recommended the store, and we were blown away with their service and attention to detail,” Krista says.

Spicing up a Classic 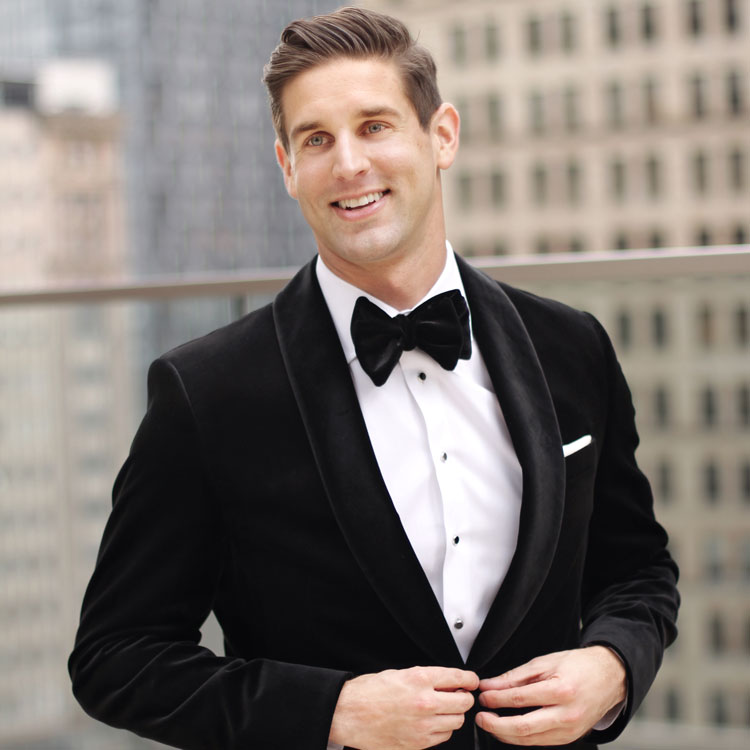 To accompany the classic look of their black and white decorations and gold accents, Maura Higgins and Bradley Taylor wanted the groomsmen to wear tuxedos with bow ties. To spice it up a bit, Bradley wore a velvet jacket, and all of the bow ties were velvet.

“We wanted to keep the black, but we thought adding another texture with the velvet would make it more interesting,” Maura says.

Maura did a lot of research to find the perfect ties. She says a lot of velvet bow ties are pre-tied, and neither she nor Bradley wanted that. The pair eventually found the perfect options from Spero Accessories on Etsy.

“Since you tied them on your own, they didn’t look completely uniform,” Maura says. “So they all had their own little personality, which we really liked a lot.”