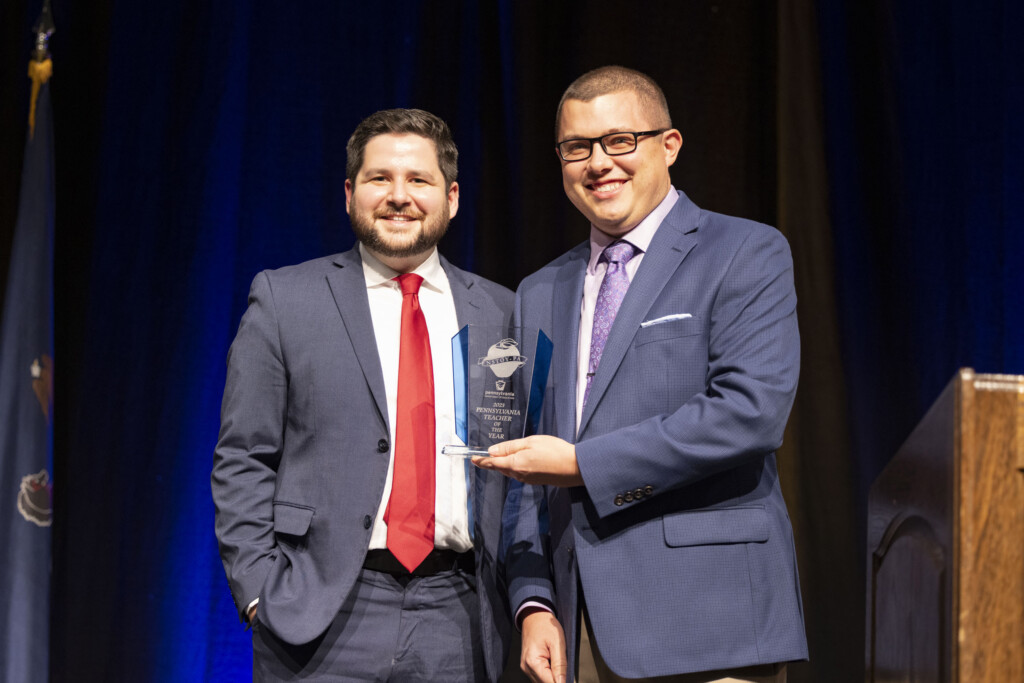 Blackhawk School District in Beaver, home of the Cougars, is also home to Greek gods, Indiana Jones, a caveman, a Roman emperor, gladiators and King Tut.

Those historic figures are actually represented by one Highland Middle School social studies/ancient world history teacher, Ryan Hardesty. Hardesty, 37, has been named the 2023 Pennsylvania Teacher of the Year, out of 12 finalists chosen from across the state.

“I am so humbled and honored to have been chosen from among these educators standing on the stage with me. The fact that they are on this stage is a testament to their hard work and dedication. Thousands of students have benefited from them being a part of their lives,” Hardesty said during his acceptance speech.

Prior to announcing Hardesty as the winner in early December, Acting Secretary of Education Eric Hagarty noted during the ceremony: “Do you know how many teachers there are in Pennsylvania? There are 250,000 teachers across the state of Pennsylvania, and these 12 are the best of the best. It’s really incredible what these 12 folks do, whether it’s in the classroom, dealing with bullies in school, mental health wellness or getting through the pandemic. It’s really incredible what these folks do, and you can see that they all create a sense of belonging in their classrooms.”

Hardesty admits he was surprised when his name was announced.

“I was in shock and disbelief. I thought, ‘What are the chances I will get this? There are better teachers in my building, let alone the state!’” he notes. “Though, this process lets you see a lot of things you’re doing that you don’t really recognize. I did gain confidence in my teaching ability through the process. ”

The National Teacher of the Year program annually recognizes a professional who inspires students of all backgrounds and abilities to learn; who has the respect and admiration of students, parents and colleagues; and who plays an active and useful role in both school and community, according to a Department of Education news release. 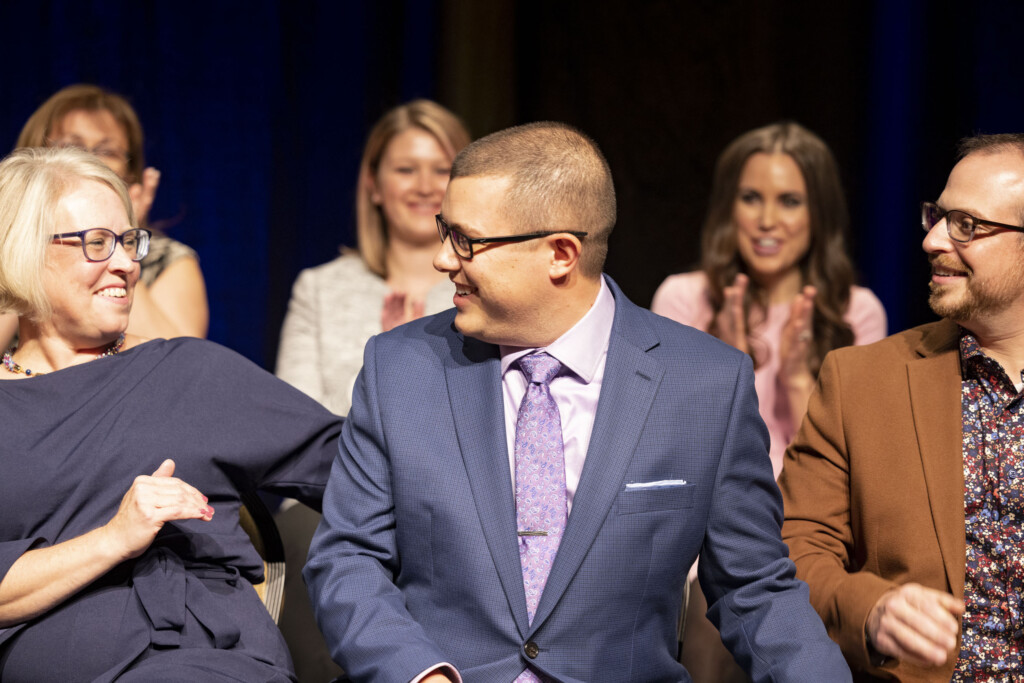 RYAN HARDESTY, HIGHLAND MIDDLE SCHOOL TEACHER, SMILES AS HE IS NAMED THE 2023 PENNSYLVANIA TEACHER OF THE YEAR DURING A DEC. 5 CEREMONY IN HERSHEY.

Hardesty says one of his students nominated him for Teacher of the Year in 2020 when the pandemic hit.

“I think my students appreciated what I was doing to try and navigate virtual learning,” says Hardesty. “However, the process was held back a year, so my nomination was held for a year. They reached out again in 2021, and I recently finished the application process.”

Hardesty explains the first part of the process is filling out questions about yourself and your teaching methods. The second part is a Zoom interview with five questions — three given in advance and two given on the spot. Each candidate has a 20-minute limit in answering the questions. The candidate pool is then narrowed to 32. The third round to determine the 12 finalists requires a video submission consisting of a lesson, a detailed lesson plan and a 5-minute speech each educator prepares on a given topic and about their school.

Hardesty, a Beaver County native says he decided in high school that he wanted to be a teacher. Some of his inspirations and role models include former Blackhawk educators Dawn Porto (philosophy) and the late Carl Anderson (middle school social studies and science).

Hardesty also joins mentor Debbie Daquila (high school social studies) as one of the best of the best. Daquila was named the Beaver County Teacher of the Year in 2014, the year she retired.

“I always had an interest in the subject, history specifically,” notes Hardesty. “When I was in college, I also developed a love of political science.”

He received his undergraduate degree in history and political science from the University of Pittsburgh, and later earned a master’s in teaching.

As for the costumes and his historic raps, Hardesty notes: “I try to make it fun, even for the students who don’t feel history is their cup of tea. I think looking at your history helps you to understand the world you live in and how it got where it is. I also teach my students to be active citizens, and learning our history helps with that.” 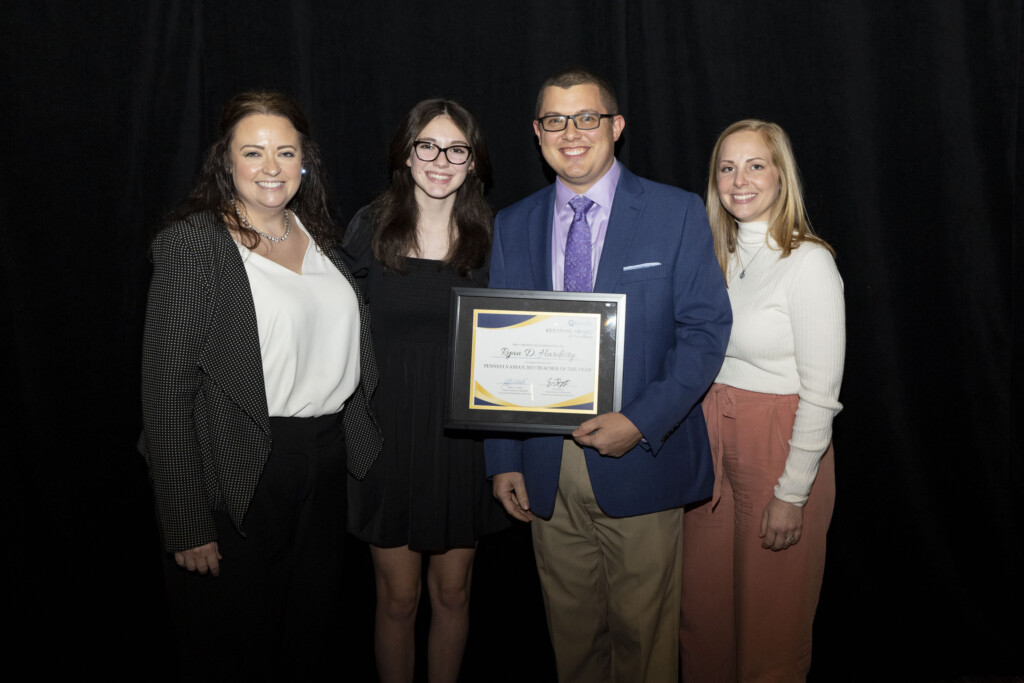 One of his students, eighth-grader Sylvia Davis, spoke in favor of his appointment as Teacher of the Year, prior to his announcement.

“The legend of Mr. Hardesty is strong — not only at my house, but at every house in the district,” said Sylvia in her speech. “I see that Mr. Hardesty dressed professionally today — and that’s not always the case. We get to see quite a few costumes throughout the year in class. He uses those costumes as a way to explain and capture our attention. He teaches us to think every day and leaves us wanting to learn outside of his classroom.

“More than once, I have found myself reading or researching about things outside of class because Mr. Hardesty made me curious,” Sylvia continued.

Sylvia’s mother, Rachel Davis, also lobbied for Hardesty to be named Teacher of the Year. She submitted a letter of recommendation with his application.

“I think it’s his commitment to finding new ways to both reach and motivate students,” she wrote in her recommendation. “…Mr. Hardesty has continued to evolve in and out of the classroom to meet the needs of every student. He treats every day as an opportunity to get a little bit more out of each student.”

Hardesty and his wife, Melissa, are both Blackhawk graduates and are excited to have their sons — Ben, 6, and Grayson, 2 — attend school in the district.

“He has always gone above and beyond in his career to build connections with his students, both inside and outside of the classroom,” says Melissa. “He works hard to make an impact in our community. He is so very deserving of this honor. Our two boys have an amazing father and role model to look up to!

Hardesty urges all educators in the state to continue to meet and overcome the challenges of the changing face of education.

“The impact they are making in the classroom is astounding. They’re changing their students’ lives for the better.”