Our editors' FRESH TAKES on our favorite Pittsburgh things, including the best steamy dessert and the best restaurant for the mother-in-law. 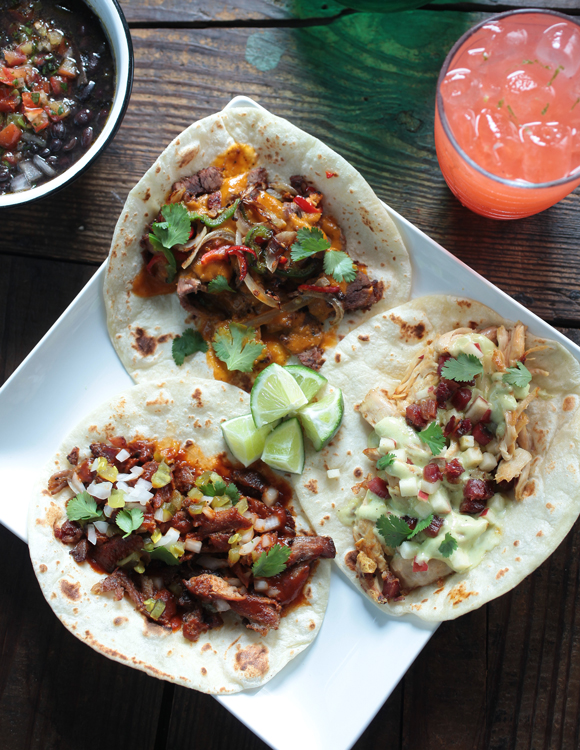 Best Restaurant Where Smoke Is Encouraged

Smoke bbq taqueria
The city suffered several painful, taco-free months when Smoke bbq taqueria closed its original location in Homestead last year and worked on renovations for its new spot in Lawrenceville, which debuted this winter. Thankfully, the hard times are behind us, and Austin-expat owners Jeff Petruso and Nelda Carranco’s new location is even better than the old. At the front of restaurant, BYOB-toting customers dig into massive tacos filled with brisket, ribs and chorizo, while in the back, the chefs tend to an enormous indoor smoker crammed with fall-off-the-bone meats. Oh, and get the creamy queso with the fresh-fried chips. Trust us. —PD 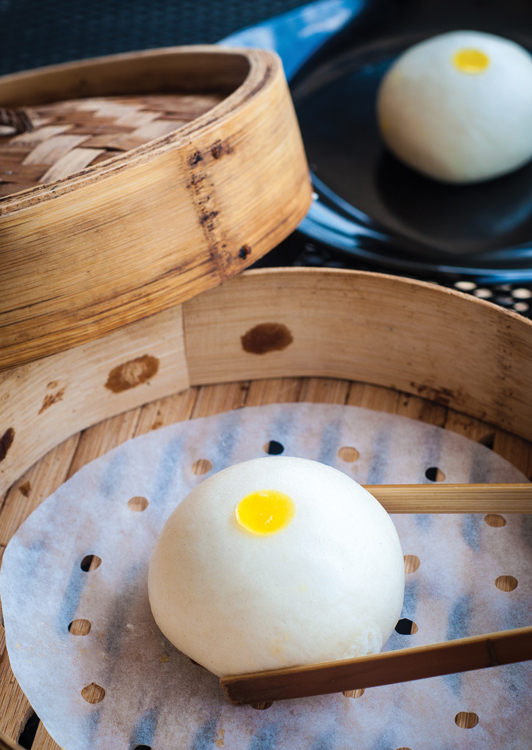 Everyday Noodles’ Sweet Egg-Yolk Steamed Bun
As its name suggests, Everyday Noodles is all about noodles. The Squirrel Hill restaurant features picture windows where chefs stretch noodles before your eyes, and the main dishes are soups and dumplings. But near the bottom of the à-la-carte menu is a wonderful non-noodle dessert: No. 55, “Sweet Egg-Yolk Steamed Bun.” The name is an accurate description. It’s the sweetened yolk of a duck egg injected into a soft bun, which is steamed. The result is unexpected but sophisticated, similar to a custard doughnut but airy instead of gut-bustingly heavy. Eaten immediately, the yolk runs like that of a sunny-side egg. —EL 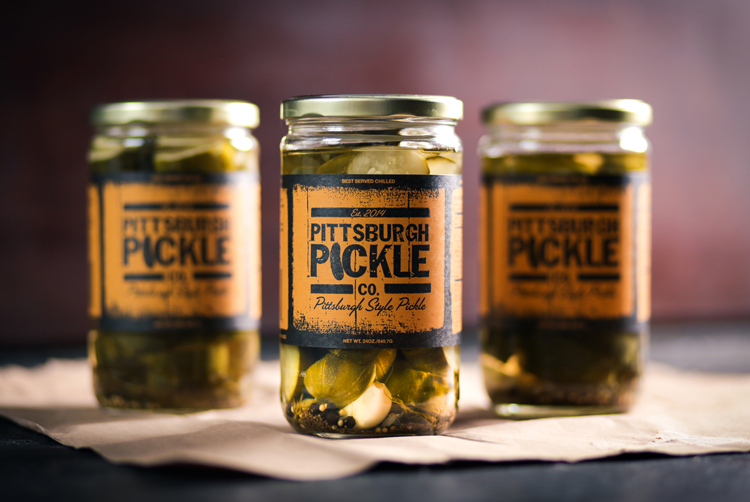 Pittsburgh Pickle Co.
Joe Robl, John Patterson and Will Patterson, co-owners of The Beerhive, wanted to include deep-fried pickles on their menu but couldn’t find the proper product to fry. Naturally, they made their own. Thus was born the Pittsburgh Pickle Co., maker of artisanal pickles that are irresistible whether fried or plain. A special brine and spice blend elevate the ex-cucumber from deli side to delectable dish, popular enough to rival The Beerhive’s signature wings. Elbowing out a bar-food staple? That takes a powerful pickle. They’re available in jars at Marty’s Market, the 52nd Street Market and, as of last month, select Giant Eagle Market District locations. —SC

Best Restaurant to Have a Sasquatch Sighting

Log Cabin Inn
Lions and tigers and bears, oh my. OK, scratch the lion part, but would you settle for Sasquatch instead? Then make tracks to the Log Cabin Inn, nestled in scenic woodlands and perched above a verdant ravine. This cool restaurant, built around a rustic relic from the 1800s, offers more than history. If you choose a table by the back picture windows or on the screened-in alfresco dining space, look carefully down into that hollow and you just might holler. You’ll find a zany zoo of cleverly concealed carved critters lurking — a lion, tiger, coyote, deer and more, including the legendary Bigfoot. —MM 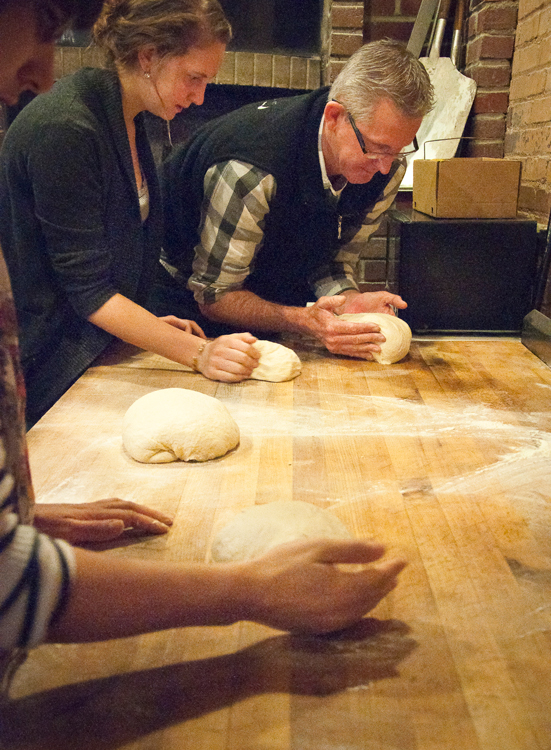 Enrico Biscotti Co.
Join Enrico Biscotti Co. owner Larry Lagattuta for a traditional Sunday Italian dinner — where you’re the cook-in-training and he’s the host/chef/entertainment. Lagattuta has been offering a bread-making class at the establishment for about 10 years, and the classes fill up months in advance with people wanting to learn the tricks of the trade, hear Lagattuta’s stories and enjoy breaking bread and imbibing with him. Want more? Lagattuta offers pizza- and pasta-making classes, twice-per-month Friday dinners and Bread @ Night classes. —LD 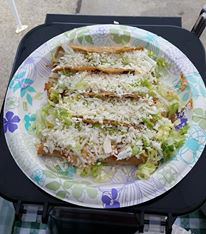 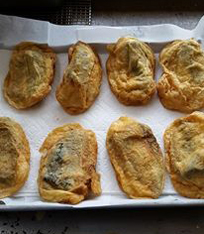 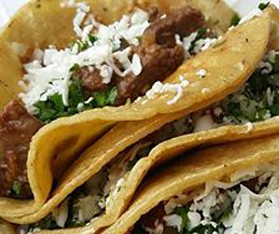 Chicken Tostada from Edgar’s Best Tacos
You find yourself with 10 minutes to acquire and eat a Strip District lunch. How to fill up on a fresh, flavorful meal while walking to your car? Make a stop at Edgar’s Best Tacos on 21st Street. For just $3.50, Edgar Alvarez will serve up a mountain of freshly grilled chicken with onions, serrano peppers, fresh garlic, sour cream, lettuce, tomatoes and cheese — and a refreshing squirt of lime — atop a corn tortilla. The tortilla is sturdy enough that, with some careful handling, you can devour your tostada on the move. Feel more in the mood for seafood? Opt for the shrimp ceviche tostada instead. —SC 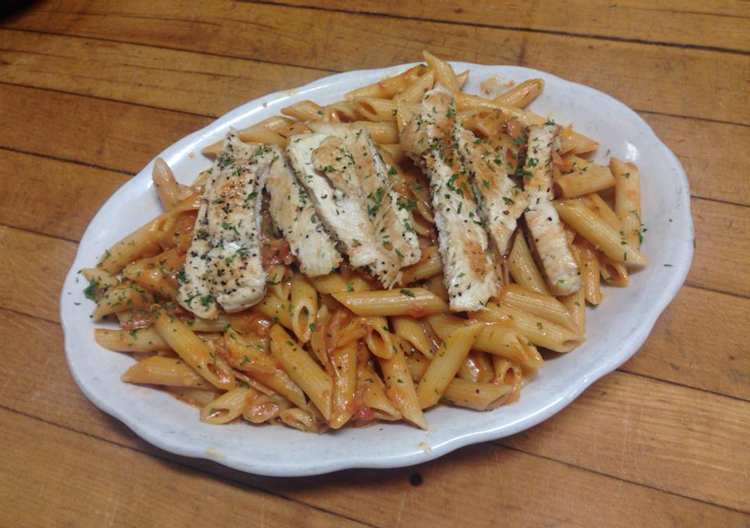 Best Place for the Mother-in-Law

Moonlite Cafe
Owner Luciano “Louie” DeFelice hails from the Italian mountain town of Pizzoferrato and says he was trained 20 miles away in Villa Santa Maria, nicknamed “La Patria dei Cuochi, The Homeland of the Cooks.” His huge smiles and personality alone might turn you into a regular at the Moonlite Café, a popular neighborhood sports bar, but you’ll also love the Mother-in-Law appetizer: hot banana peppers stuffed with veal, pork and beef served with lemon-garlic shrimp and scallops. Upon request, DeFelice will whip up some of his famous homemade cavatelli “like Mamma used to make” with potatoes. Mangia, mangia! —EDH 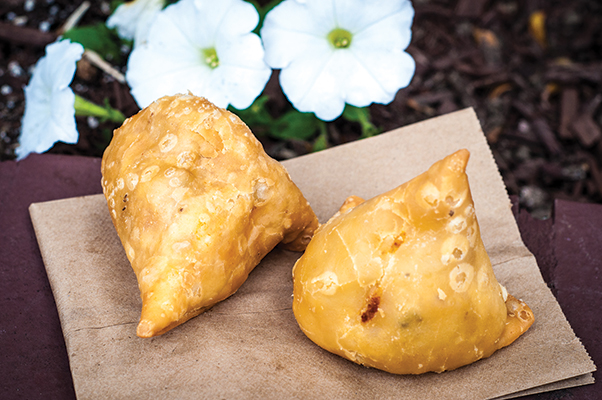 Samosas at Kohli’s
Secrecy is an underrated flavor enhancer, similar to salt but without the risk of high-blood pressure. For instance, an off-menu item is tastier than any item on the menu. Many quality Indian restaurants in Pittsburgh serve delicious samosas. The most secretive samosas, though, can be found at Kohli’s Indian Imports. The small grocery store on South Craig Street is set back from the street and accessed by a zigzagging wheelchair ramp. The inventory is kitchen basics and DVDs, but a small hot-bar by the cash register stocks lunch items, including golden samosas filled with potatoes, onions and peas. —EL 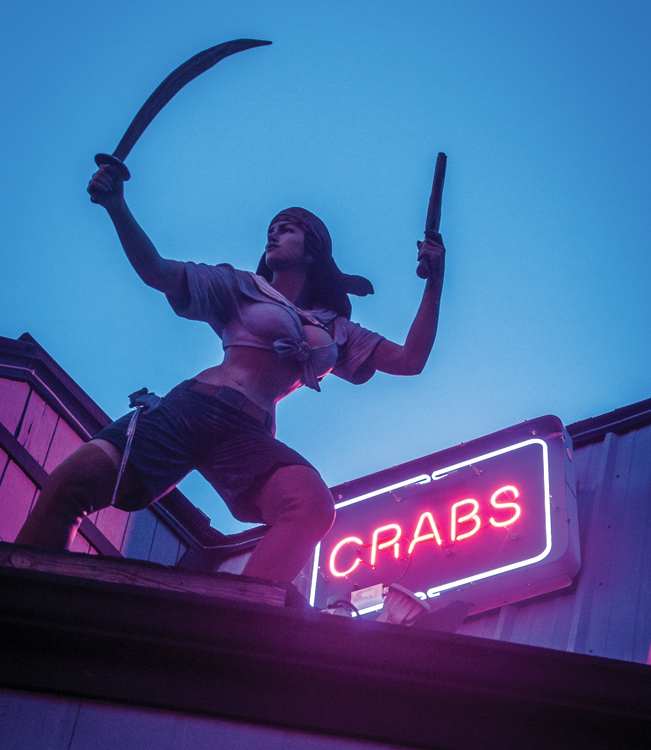 Best Use of Neon

The Baltimore House
If you find yourself driving after dark away from town on Curry Hollow Road, you’ll eventually pass a glowing, pink visual explosion. A pair of giant neon signs that announce its name as well as the phrase “Japanese Sushi & Steak” crowns the Baltimore House, a family-owned, multifaceted seafood restaurant. Look closer and more remarkable details will emerge — including, inexplicably, life-size statues of the Blues Brothers dancing on the building’s roof. All of a sudden, you’ll find yourself thinking, “You know, I could go for a crab cake right now.” Basic marketing at its finest. —SC 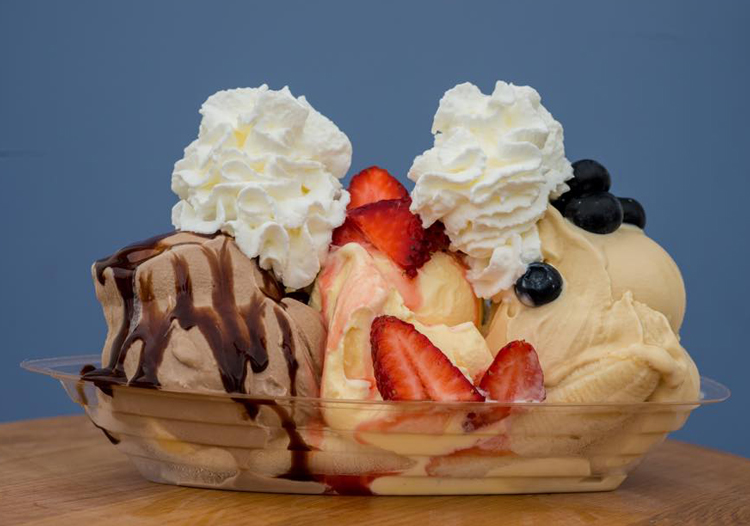 Best Reinvention of the Ol’ Float

Glen’s Custard
Custard is a natural match for pop if you’re making a float. Ice cream also provides the dairy-filled chill, but custard’s creaminess helps the two elements to blend. See magic happen at Glen’s Custard, which offers choices beyond the traditional root beer-vanilla combination, though that’s available, too. We enjoy the housemade chocolate custard with Coca-Cola, but orange soda with vanilla custard is another wise choice. Use both your straw and spoon to savor every last bit of refreshment. —KM 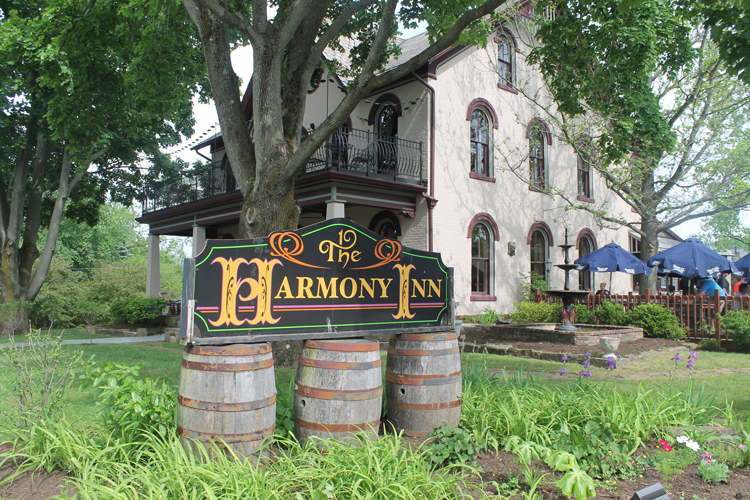 Harmony Inn
While closing the restaurant one night, Mike Cochran, general manager of the Harmony Inn, says he heard a crowd of children running through the building and slamming the door. When he went to investigate, he found no one there — and the door locked. He’s found coins in bizarre places. And he has even more ghost stories to share surrounding the Italianate-style manse, a onetime private residence built in 1856. Despite extensive remodeling by new owners Bob and Jodi McCafferty in 2013, the ghosts (deemed to be friendly by locals) are sticking around — not that we would want it any other way. —JS 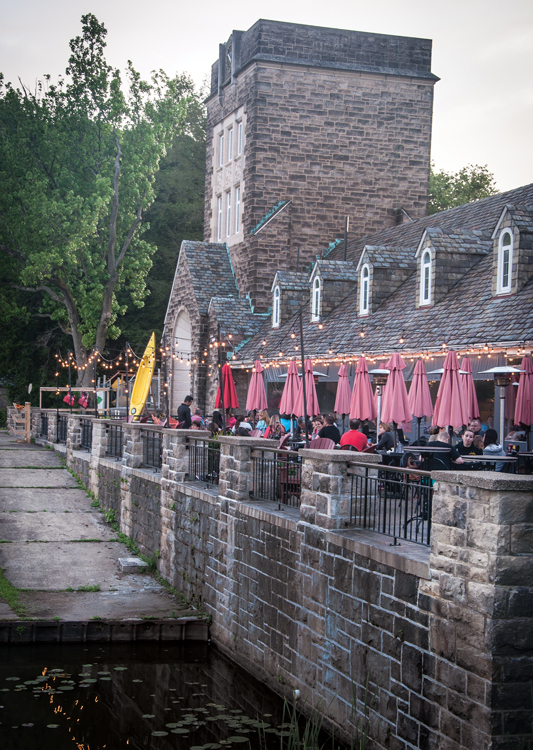 Best Use of a Former Boathouse

Over the Bar Bicycle Cafe
Fans of the original Over the Bar Bicycle Café location know its interior is decked with cycles galore. For his second location, owner Michael Kotyk decided to take over a building with ties to another transportation method: the North Park Boathouse. The site of kayak, boat and even bike rentals has been converted into a hip hangout for craft-beer buffs and others. The view from the outdoor deck is tops — the café may celebrate the bike, but on a sunny day it’s hard to find a more perfect vista than the boat-filled lake. —KM

This article appears in the July 2015 issue of Pittsburgh Magazine.
Categories: Best of the ‘Burgh