This fun and edgy indoor/outdoor swim-spa pool space will have guests feeling like they’re on a tropical getaway, all year long. 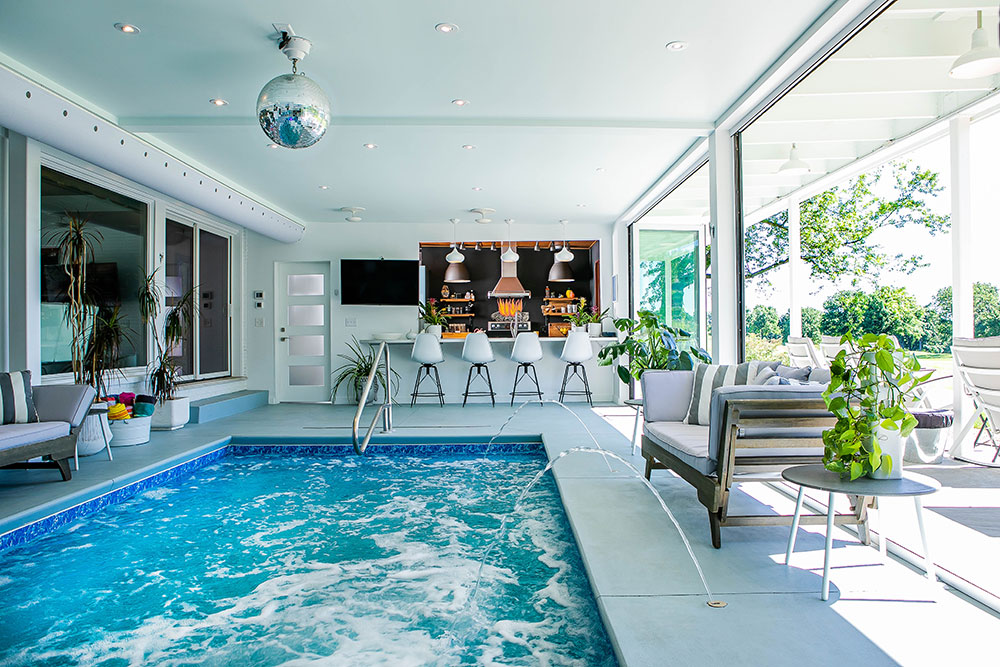 Swimsuit and flip-flop season may be brief in Pittsburgh, but Beth Fay Lane is able to hold onto it longer than most with an innovative addition at her home.

When the couple moved there in 2003, they remodeled the original kitchen and bathrooms with modern amenities that gave a nod to the home’s 1950s’ roots. The backyard hadn’t been updated since the home was built, and Lane viewed it as an opportunity to extend her home’s indoor/outdoor footprint, even in the face of the area’s unpredictable weather.

“Living in Pittsburgh, it’s nice to have somewhere year-round to escape that kind of feels like you’re on vacation,” she says. 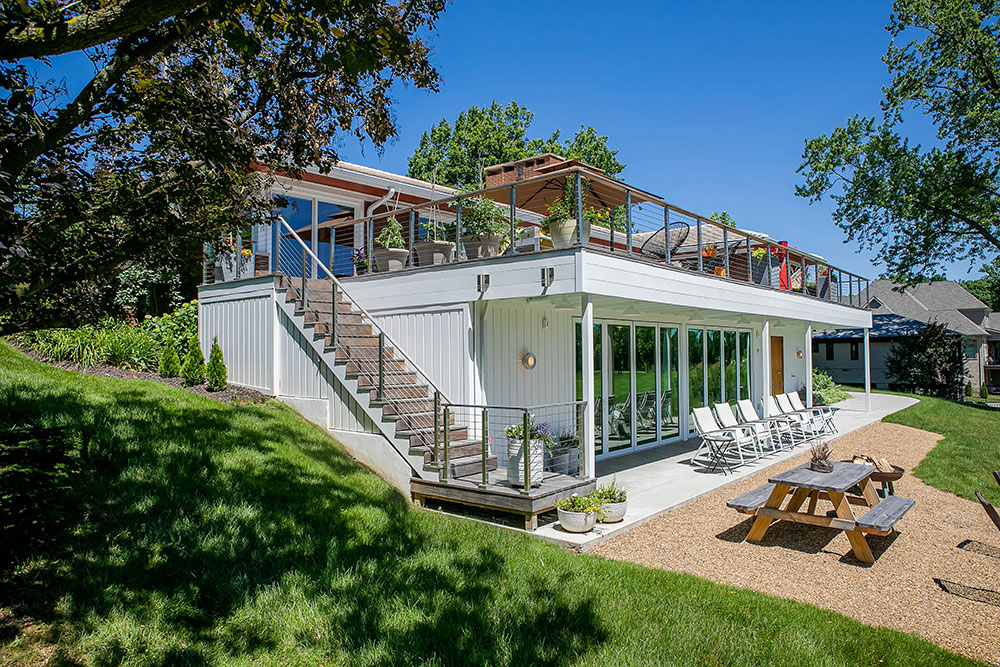 Having plenty of experience with interior design, Lane — who teamed up with Garfield-based Shelton Design/Build for the architectural plans and construction — had a clear vision of what she wanted for her home. Construction began in June 2018, and the addition was completed in 2020.

Bob Shelton, principal architect and president of Shelton Design/Build, says Lane’s vision encouraged his architectural team to think creatively about how to work within constraints of the existing home, including its limited volumetric space.

“We were bouncing back and forth about maximizing what we could do with the space that we had. It was challenging to create this really striking space,” he says. 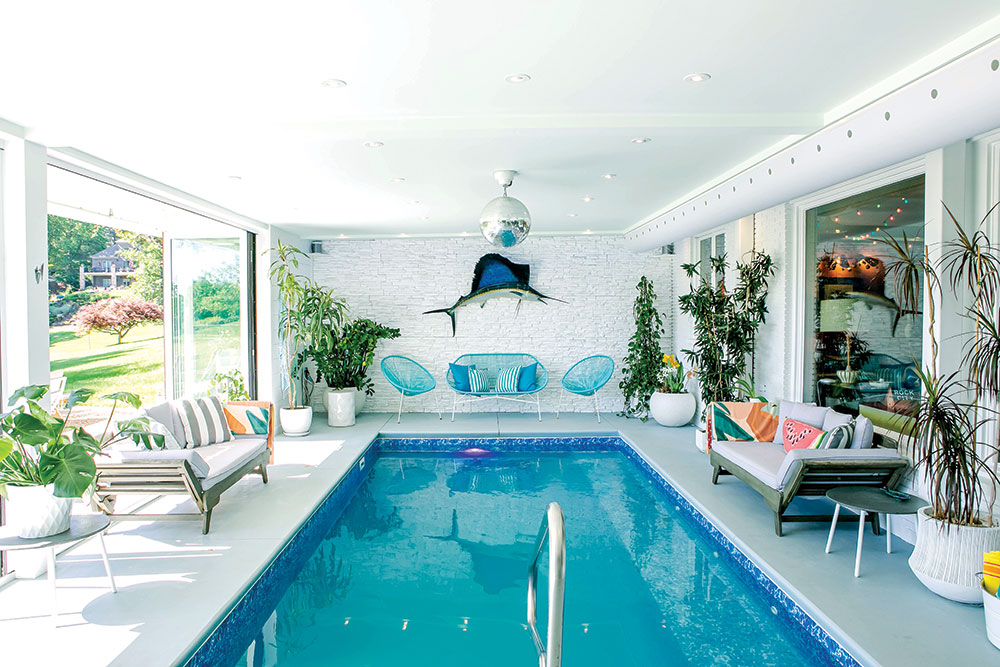 To compensate, Shelton Design/Build built the swim-spa pool before anything else in the addition. Lane adds that one of the benefits of building an indoor swim-spa — which can be a daunting process — is that it’s highly customized; a wall of panoramic glass doors connects it to the outside. The room also can maintain summer temperatures year-round.

“It’s not something that people do all the time. The nice thing with how we designed it was we retained the original exterior of our home and just put in doors to the existing house,” she says. “So even though it’s an indoor pool, we were able to treat that new space like its own envelope.”

Lane says she often pictures a finished space before the project begins and selects materials along the way that she believes fit the finished look, then adds in fun, personal details. Her own home project was no exception — and she definitely brought the fun. Some of her favorite features in the swim-spa are the disco ball that glitters above the pool and a colorful, oversized marlin fish that hangs on one wall.

“I found the big marlin fish at a flea market years ago for $50,” Lane says. “As soon as I imagined this space, I knew it would be hanging on the focal wall at the end of the pool. I’ve always embraced the unexpected, like the disco ball over the pool, because why not?”

Lane adds she wanted the light and bright pool area to contrast with the moody feel of the yacht-style kitchen. She tied the unexpected themes together with Mid-Century, retro detailing that matches the rest of the house.

“As much as we wanted the main area to have a Palm Springs feel — bright and white with textures and surfaces to complement the Mid-Century elements in the rest of the house — if it was all designed that way, it would feel too formulaic and one-note,” she says. 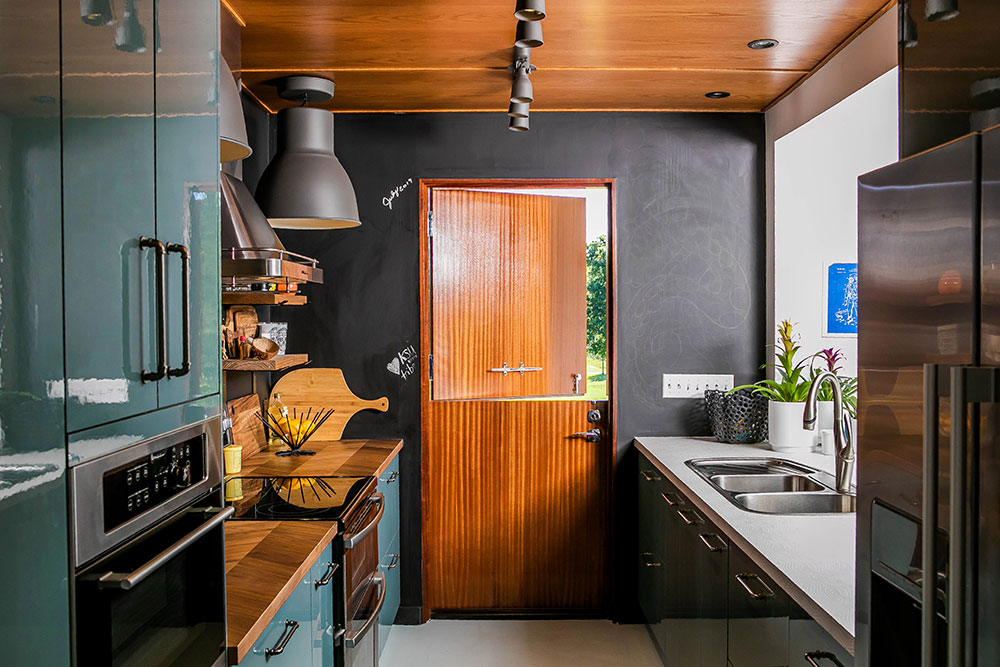 The galley-style kitchen has black chalkboard paint walls that are connected to the bathroom area by a custom, surfboard-shaped countertop. Inspired by vintage Chris-Craft boats, Lane also clad the ceiling in a glossy wood. The countertop, made of a laminate with a gray ghost outline of modern wavy wood grain, adds to the dramatic vibe.

In the spacious, spa-like bathroom, which includes a steam shower and oversized benches, Lane chose glossy tones of blues and grays that complement the striking black light fixtures. The bathroom also has a full-sized, dark water mural and a large vanity. It connects to the swim-spa space by a wall of custom-made, panoramic glass doors. 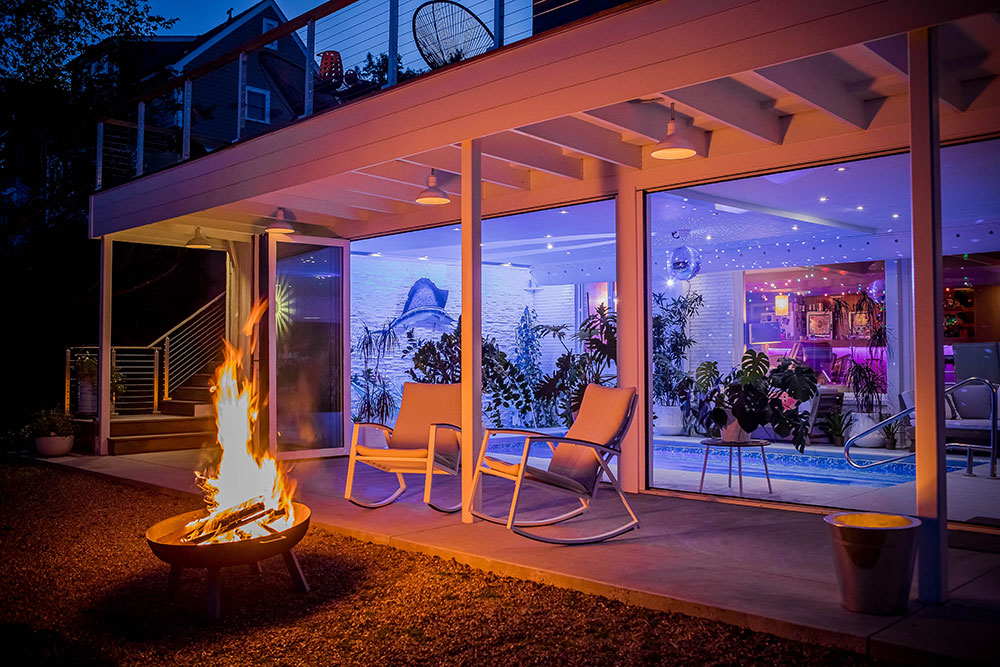 Lane, who loves to entertain, says she wanted guests to feel as though they were on the ultimate destination vacation when they enter her home.

“I wanted it to have a feel of when you stepped off the plane when you were a kid going on vacation. It was the temperature, the lights — you knew you were somewhere else,” she says. “What we wanted was a vacation house but attached to our house.”

The addition doesn’t stop there. On top of it is a large 60-by-25-square-foot rooftop deck that overlooks St. Clair Country Club. Lane calls the space — which was designed like a commercial rooftop deck with areas of Ipe tropical wood, cement pavers and a cable rail system that provides an unobstructed view — one of the most exciting parts of the project.

“We never had a deck or anything before. So on our upper level, we turned three sets of windows into doors. Before, that was just nothing, just second-story air freefall,” she says. “The deck really expanded the footprint of the upper level and gave us a huge swath of outdoor living.” 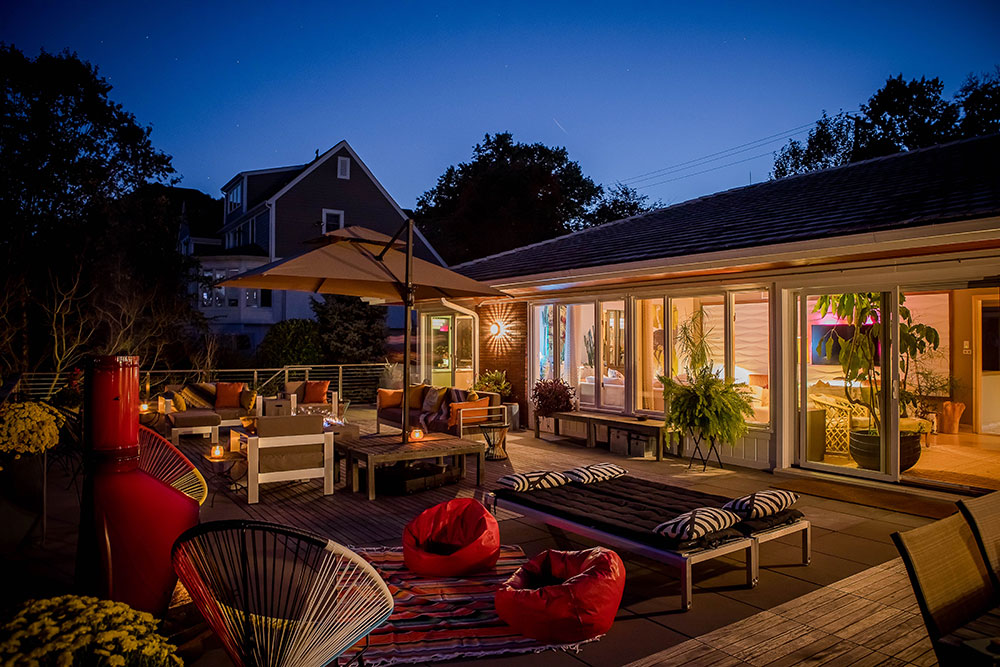 Shelton says Lane’s roof deck was the biggest Shelton Design/Build has ever built. He was particularly pleased by how the Brazilian hardwood integrated into the stair and railing system, as well as how it added a warm accent to the white nickel gap siding.

“The details of that turned out very clean,” he says.

The addition is ideal for surviving Pittsburgh’s long winters, according to the Lanes. They keep the temperature in the swim-spa space, which is decked out with tropical plants, at a balmy 80 degrees.

“Just to be able to come home from work in the middle of winter where it’s normally dark and kind of gloomy out, it’s so nice to be able to put on the bright lights and get in the pool; you can be swimming with a foot of snow outside,” Lane says. “It’s awesome being able to get the mood-lifting benefits of summertime, even when it’s not summertime.”

This article appears in the July 2022 issue of Pittsburgh Magazine.
Categories: From the Magazine, HOME + Design, Hot Reads