The Miniature Railroad & Village, housed at the Carnegie Science Center, is a whimsical and elaborate creation that contains plenty of details, so let’s break it down. 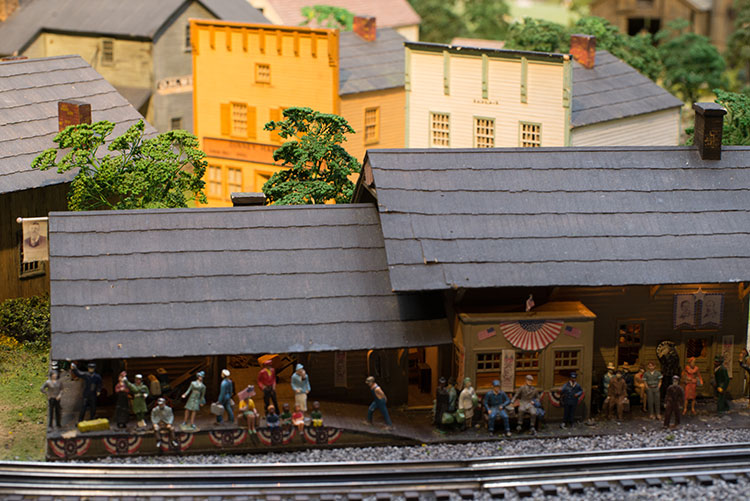 What began nearly a century ago as a wholesome hobby has grown into a beloved civic treasure, dazzling hundreds of thousands of annual visitors.

The Miniature Railroad & Village, housed at the Carnegie Science Center (carnegiesciencecenter.org) since 1992, was the creation of Brookville, Pa. resident Charles Bowdish in 1919. The massive display — featuring historical scenes and locations from throughout western Pennsylvania — moved in 1954 to the Buhl Planetarium, the predecessor of the modern science center on the North Shore. The whimsical and elaborate creation contains plenty of details, so let’s break it down.

For more photos, go to
pittsburghmagazine.com/scoop

1,300 feet
The total length of track in the Miniature Railroad.

7 minutes
The length of a 24-hour day around the Miniature Railroad; there’s a bit more daylight than darkness, keeping the tiny town in a permanent summer.

Bijou Dream
The bygone movie theater in East Liberty is recreated in full in the village; posters on the theater’s facade advertise screenings of the 1927 science fiction classic “Metropolis.”

June 30, 1909
The date depicted in the village’s replica of Forbes Field — not coincidentally, the date of the ballpark’s historic first game. The brick forming the model’s outfield wall is actual brick from the park itself.

Mister Rogers’ House
The only building in the display not based on a real-life building is instead a replica of the fictional home of Mister Rogers. Peek in the windows to see many details from “Mister Rogers’ Neighborhood.”

Mr. Spiff and Puddles
One of the village’s more subtle (and funny) animations; as Mr. Spiff tips his hat at a passing woman, his pooch, Puddles, takes the opportunity to relieve himself on a nearby tree.

Scavenger Hunt
Want to look for some hard-to-find details? Seek out Punxsutawney Phil, a ghost in a barn and a camper running away from a bear.

260,000
The number of handmade trees throughout the display. They aren’t plastic; they’re crafted from wild hydrangea flower tops.

108
The number of “animations” — tiny scenes or characters with moving parts — found throughout the village.

¼ inch = 1 foot
The scale of objects in the Miniature Railroad & Village. By that ratio, a four-story building would be about 10 inches tall.