Bayardstown Went from 'Lo-Fi Side Project' to 'Business Asset'

Fast Company details how Deeplocal CEO Nathan Martin made something out of (just about) nothing.

Forget the bar-crawl scene. Pittsburgh's 20- and 30-somethings have been heading to a nondescript Strip District spot for the past two years. Bayardstown Social Club is a members-only social club that flies under the radar to some because it's in a blink-and-you'll-miss-it section of Penn Avenue (plus it's literally an empty lot).

The club is the brainchild of Nathan Martin, CEO of the tech firm Deeplocal. As Fast Company outlines in a recent piece, the buzzworthy nightlife destination — where members can bring their own food and hang out around a fire until midnight Thursday through Sunday (in season) — has elevated Deeplocal's profile, earning it props for filling a need in the community and marketing itself in a new way. Our favorite parts about the club? Drop-in visitors are welcome, space permitting, for a small fee, and food trucks and breweries work with, and set up at, Bayardstown on the regular.

As one might expect from a tech powerhouse, mum's the word on Apple's expansion plans involving Pittsburgh. The Pittsburgh Post-Gazette reported that the company, housed in the Robert Mehrabian Collaborative Innovation Center at Carnegie Mellon University, is searching for office space, as its lease is due to expire at the end of the year. Here's hoping Apple's new space would include Sandcastle features — to borrow from Google Pittsburgh's idea of recreating Kennywood inside its Bakery Square site. 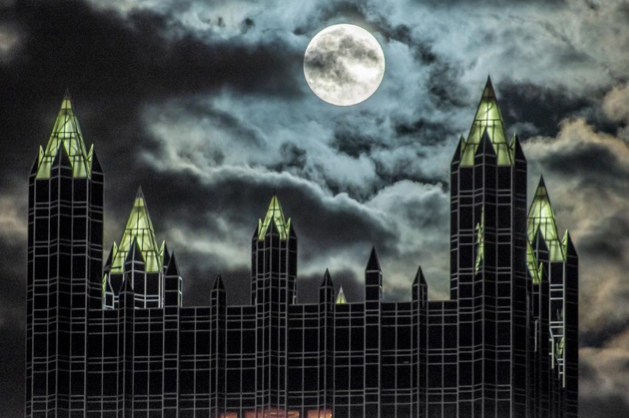 Contributor Dave DiCello captured this haunting shot of the harvest moon from Point State Park, also covered in Time. The combination of the ominously dark clouds and eerie lighting of the PPG building makes us wonder whether some dementors from "Harry Potter" made an appearance.

This article appears in the September 2014 issue of Pittsburgh Magazine.
Categories: The 412