At RMU, Best Man for the Job is a Woman

Robert Morris goes where no NCAA school has gone before by adding Brianne McLaughlin-Bittle to the men’s hockey staff. 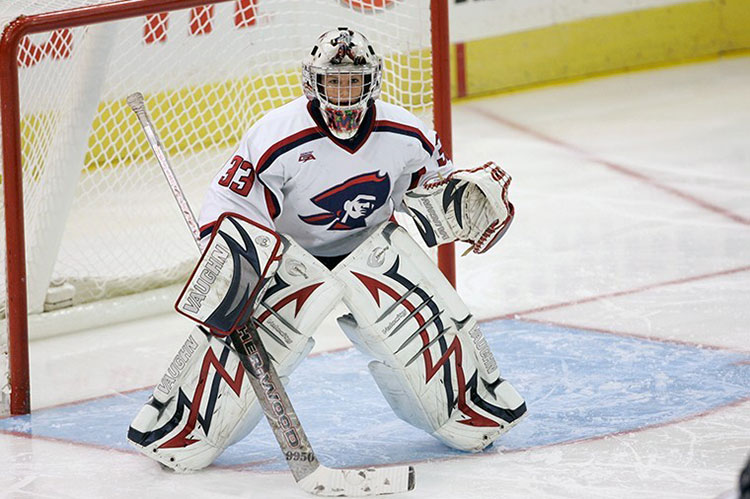 As it turns out, the best man for the job was a woman.

And it was that determination on the part of Robert Morris men’s hockey head coach Derek Schooley to find the right fit for his vacant volunteer assistant/goaltenders coach position rather than a desire to make history that has positioned Brianne McLaughlin-Bittle to blaze a trail this season with the Colonials.

“I wanted the best available person I could get,” Schooley insisted. “To me she’s a coach, not a female.

“This isn’t a publicity stunt.”

As it turns out, it was a slam dunk. 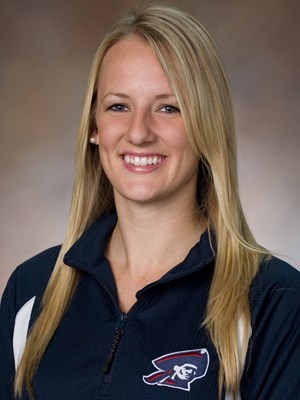 McLaughlin-Bittle, 32, has the credentials and the reputation within the hockey community. She’s a former two-time U.S. Olympian and former professional goaltender with the Buffalo Beauts of the National Women’s Hockey League. She’s worked as a coach in various capacities with USA Hockey and runs a goaltending school (“Brianne McLaughlin Gold Medal Goalie Training”) out of the Island Sports Center on Neville Island, which also serves as RMU’s home rink. She’s a 2009 graduate of Robert Morris who has played for and coached with the Colonials’ women’s team.

“The most significant thing about it is it’s not about making a statement, it’s about finding the person that’s best for the job,” offered Nate Ewell, the deputy executive director of the website College Hockey Inc.

McLaughlin-Bittle, according to Ewell’s research, became the first woman to join the staff of an NCAA men’s team by a matter of days. She hit the ice just before Mackenzie Bruch did as the volunteer assistant/goaltenders coach at Albertus Magnus College in Connecticut.

There are also men serving as unpaid assistants all across the NCAA, even at higher-profile, bigger-budget (relatively speaking) programs. The goaltending coach at Denver University, Corey Wogtech, is a volunteer. And Denver’s program has won eight national championships and is ranked No. 1 in this week’s uscho.com Top 20.

For McLaughlin-Bittle, the chance to participate in the men’s game at her alma mater and at the school where her husband played and coaches is payment enough, at least for the time being.

“Being at Robert Morris is the best part,” she said. “We’re both very invested in the school, in the hockey programs. Being a part of anything is cool but when you’re so passionate about it, it’s that much better. 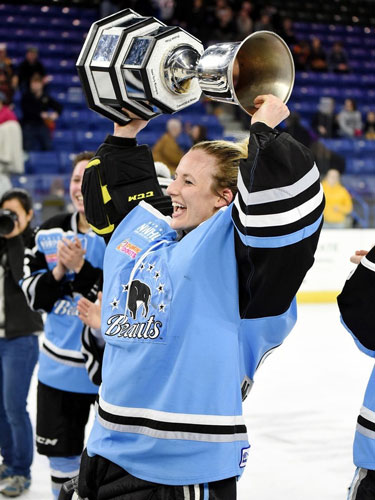 “We go to all the men’s home games, anyway.”

There isn’t any doubt on Schooley’s or McLaughlin-Bittle’s part that she’ll be able to do the job.

She grew up playing youth and high school hockey on boy’s teams (the only option at the time in Elyria, Ohio).

“I was always able to prove myself, that I belonged,” McLaughlin-Bittle remembered. “I always wanted to feel like I deserved to be there, not that they had to deal with me because they had to.”

Where this is eventually headed remains to be seen.

McLaughlin-Bittle considers herself more of a goaltending expert than anything else.

“I watch games like a fan,” she said. “My husband always makes fun of me. I know everything there is to know about the goalie position but if you ask me about breakouts or systems, I tune out. I have no idea where that will take me. I haven’t put together a long-term plan for that quite yet, but I’m enjoying it so far.

“To have this opportunity and work with the men, they’re a little bigger and stronger and play a little differently but it’s the same game, you know? There are a lot of players I played with who I think would be awesome coaches. I’m excited to see what comes next as far as other coaches opening up to the idea of having a woman on the staff.”

Schooley said the adding of McLaughlin-Bittle to his staff has already “won the internet,” and won over the Colonials’ three goalies.

“They wanted somebody to work with them who they thought was qualified and knew what they were doing,” Schooley said. “That’s what we gave them.”

Ewell, one of the nation’s authorities on the college game, is also on board.

“It’s pretty cool,” he said, “pretty progressive. It’s probably pretty smart, too. The goaltenders coach position, volunteers, especially, you have to take advantage of the talent in the area.

“It seems pretty smart to take advantage of somebody with that level of skill that’s in your back yard.”