Owner Matthew Buchholz sells a variety of novelty items based on old horror and sci-fi movies. 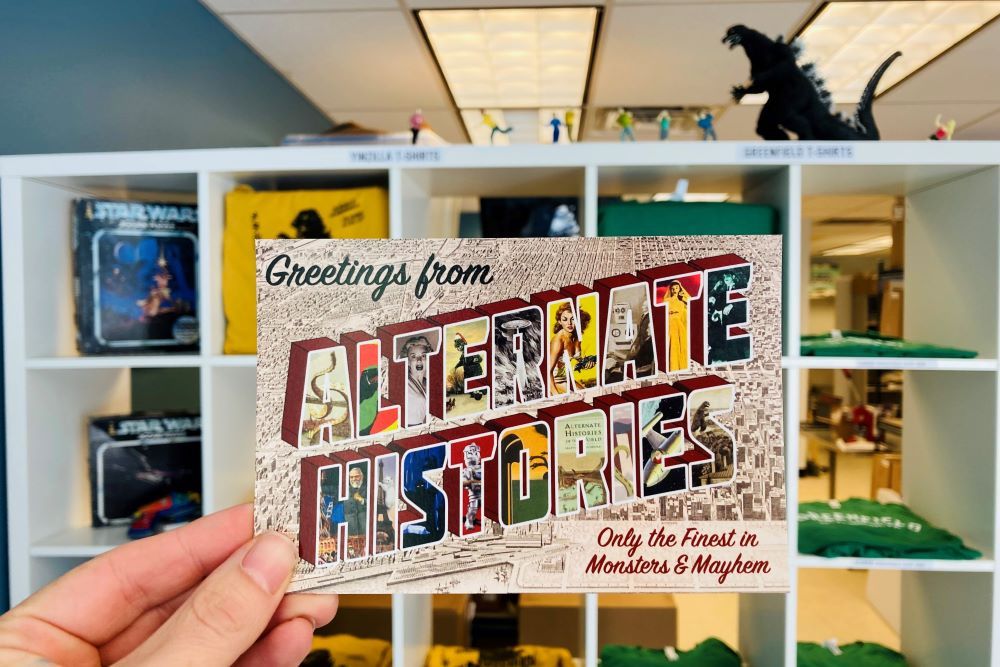 Matthew Buchholz always has zombies on the brain.

The artist, who grew up in Arizona watching old horror and sci-fi movies with his dad, parlayed his childhood monster obsession into a unique business.

At Alternate Histories Studio in Greenfield, he creates and sells art prints, greeting cards, books, records, T-shirts, stickers and pins that put a creepy spin on the past. 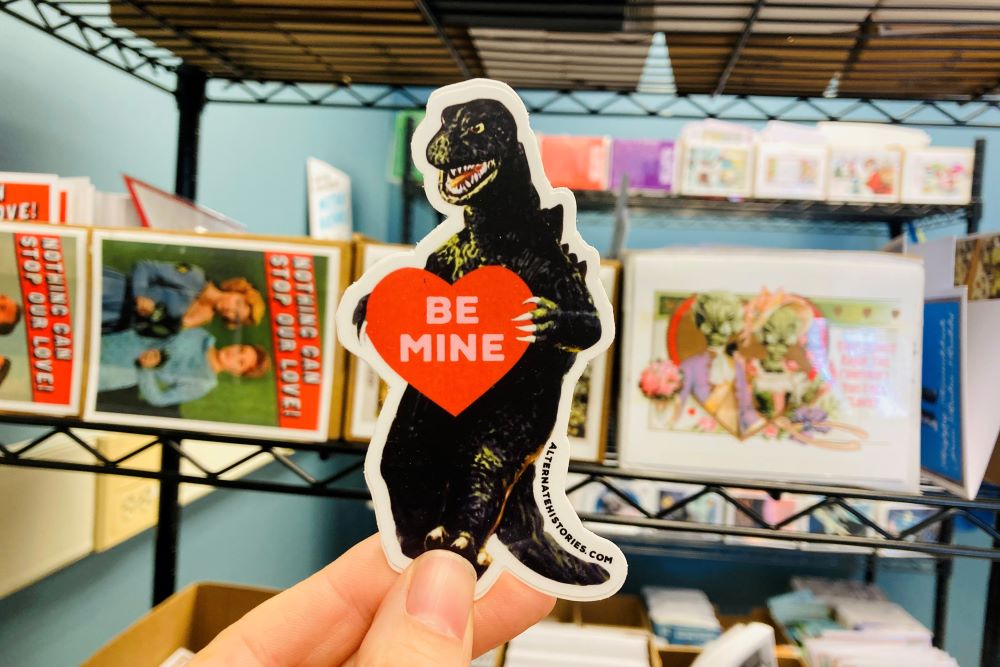 The weekend retail space, located at 517 Greenfield Ave., will host a party on Friday, Aug. 26 from 5 to 8 p.m. to celebrate the release of East End Brewing Co.’s Greenfield libation, the latest addition to its You Are Here neighborhood beer series. The tropical wheat ale, brewed with mangoes, passion fruit, peaches and pineapple, is a quaffable 4.7% ABV. La Palapa will be there slinging tacos and DJ Mary Tremonte will be spinning tunes. Rita Johnson of Ex Libris Fibers, who has a workshop in the basement of the building, will be selling her hand-dyed yarn.

By October, Buchholz plans to expand his hours and use the facility as a showcase for other local makers.

On the shelves, customers will find landscape paintings and maps with Buchholz’s brand of sea creatures emerging from the river, flying saucers in the sky or a Yinzilla attacking Downtown. He modifies online images that are in the public domain and frequents garage sales, antique stores and flea markets to find vintage artwork, postcards and travel brochures. All 50 states are represented in his work, but Western Pennsylvania is his biggest inspiration. 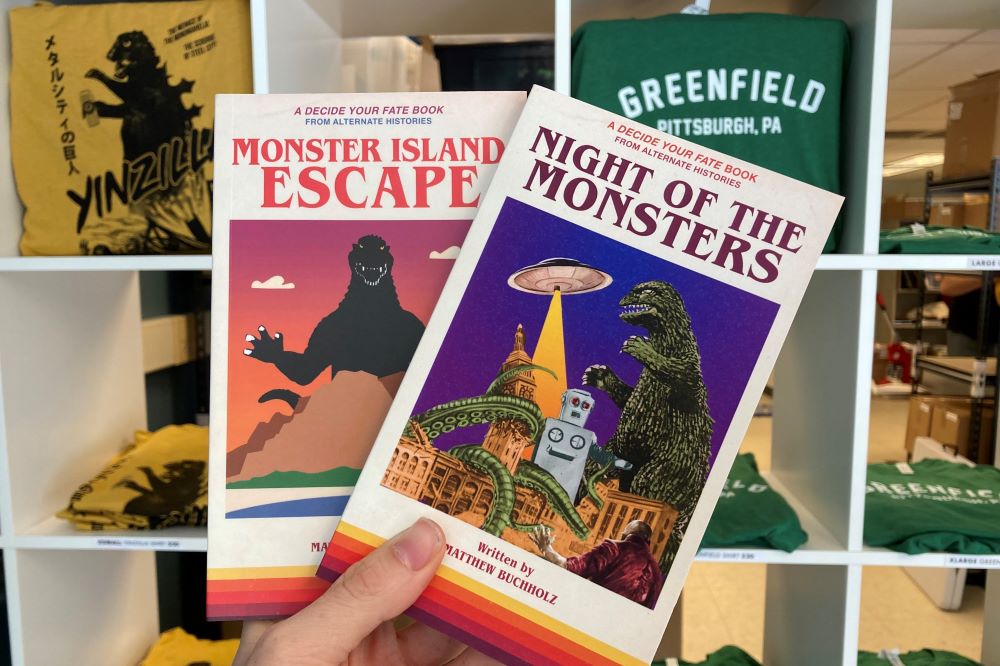 Buchholz came to the Steel City in 2008 after attending art school in New York.

“I moved here because of a relationship that did not work out, but my relationship with Pittsburgh did,” he says. “Part of what was fun about moving to Pittsburgh was learning more about the city’s connections to horror movies and people like George Romero, John Russo and Tom Savini, who are still inspiring because of how fiercely independent they were in creating work on their own terms.”

While working at Wild Card, a Lawrenceville card and gift shop specializing in local art and crafts, he started Photoshopping his own brand of greeting cards using old images of Pittsburgh as a beastly backdrop.

The success of the line led to a one-man, monster-themed art show at the Butler Street store and, eventually, to Buchholz branching off on his own. Independent Brewing Company in Squirrel Hill is a veritable gallery of his work, and many Pittsburghers start their day sipping coffee out of a Yawn of the Dead mug.

Buchholz operated the business out of this Greenfield home for 12 years, fulfilling online orders, preparing his wares for craft shows and wholesale distributing to shops across the country. He needed more space to keep up with the demand. 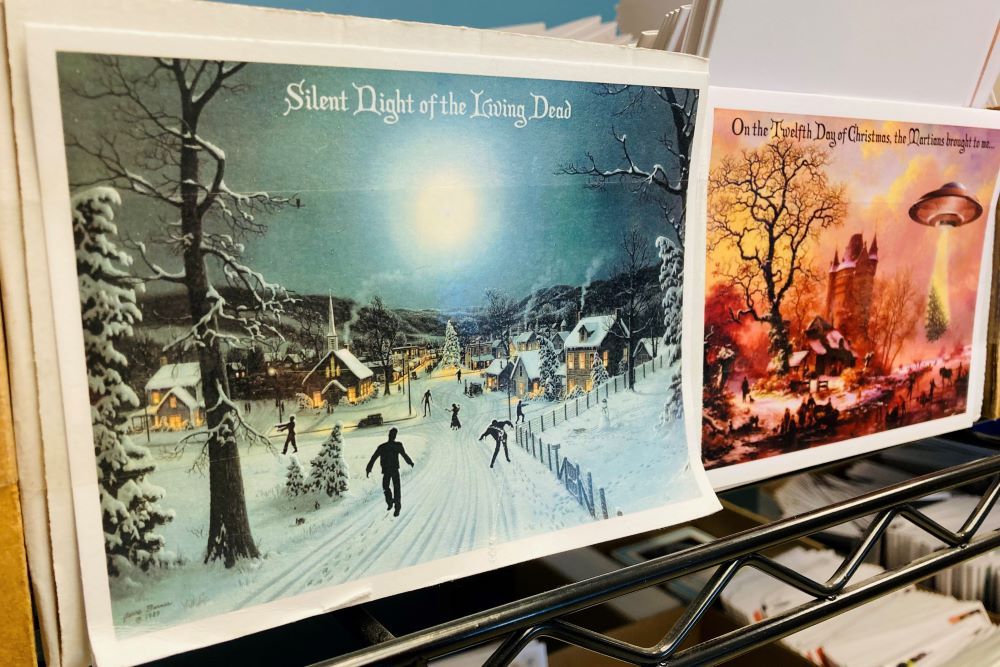 He signed the lease for Alternate Histories Studio, the former Staghorn Garden Café, in June. The structure also housed a drug store for many years and there’s a mural paying tribute to its prescription past on one of the outside walls.

“I love the look of it and how it fits into the neighborhood, which feels like a scrappier neighbor of Squirrel Hill,” Buchholz says. “There are a lot of people here who really love the community and are invested in seeing it grow and change. People are excited to see something new come into this space.”

He’s busy putting the finishing touches on his 2023 National Parks Monster Calendar, an annual best-seller. Other new projects include a 1,000-piece puzzle, Decide-Your-Fate books reminiscent of the Choose-Your-Own-Adventure novels of his youth and a vinyl album. 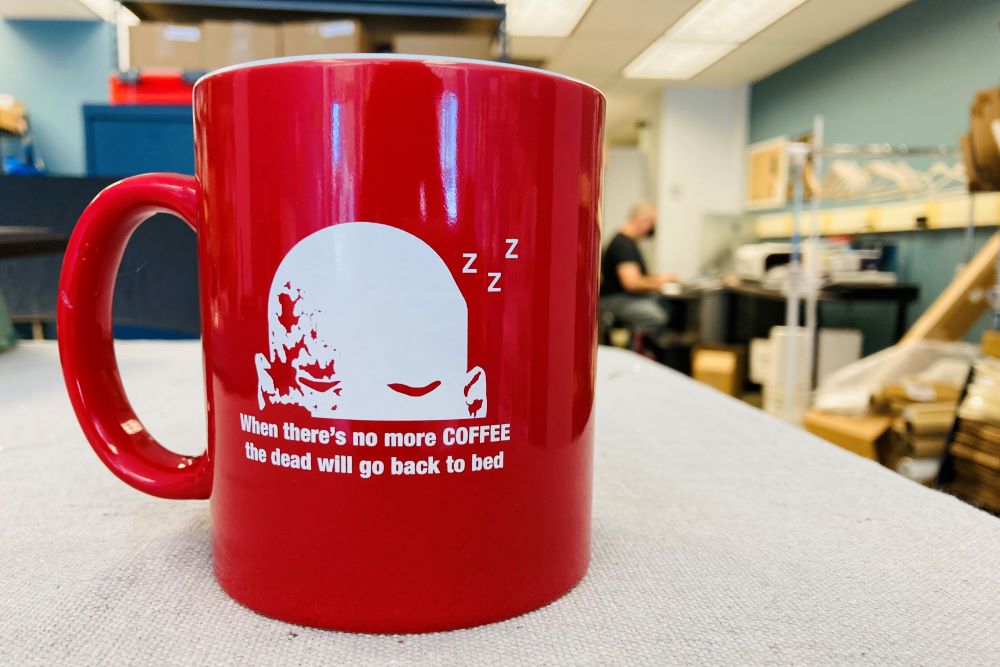 “Music For An Unknown World” is a collection of ‘60s-era space rock and other oddities. It’s dedicated to his dad, Robert Buchholz, who died last year. Due to the licensing of songs, the record release took a year from concept to creation, with only 500 copies available.

It’s already in heavy rotation at the studio, adding to the ambiance.

In a digital world, where most people communicate via text message, Alternate Histories provides a wonderfully weird alternative to computer-based greetings.

“Our cultural discourse is driven by social media, but sticker and button sales are bigger than ever,” he says. “It’s easy to believe this idea that everything is online, but there will always be people who want a tangible object to share with friends and family.”