The Hilltop neighborhood has embraced its status as Pittsburgh’s slightly spooky territory, and it seems to be paying off. 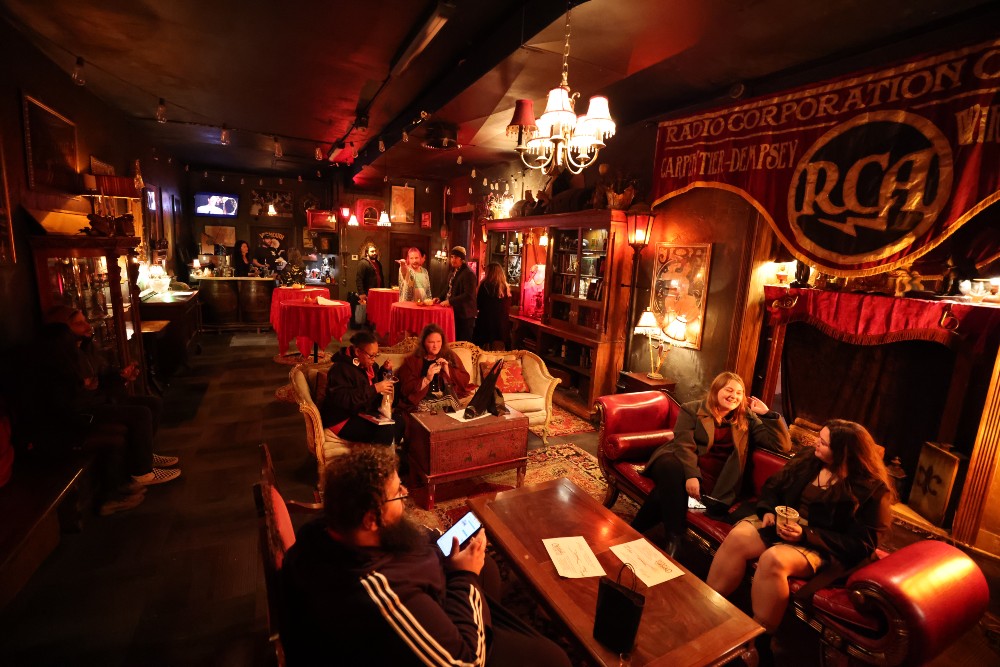 I’m going to start saying I live in Allentown.

After a summer move, I found myself in one of those in-between corners of Pittsburgh that aren’t identifiably part of any one particular neighborhood. Technically, we live in the South Side Slopes; in practice, we’re kinda just “up there,” generally. (While the lines are blurred for us, it’s nowhere near as confusing as it is for those in the Friendship/Bloomfield/Garfield/East Liberty vortex.)

On Saturday night, though, I went to Allentown’s biannual Night Market, a neighborhood showcase that particularly spotlights the overall vibe this resurgent neighborhood has been pursuing lately: Year-Round Spooky.

This clinched it. The neighborhood is just too cool. I’m just telling people I’m in Allentown. (We walked to get there, so it’s not much of a stretch.)

Call it goth, if you grew up in the ’90s, or metal if you’re a bit older. Up and down Warrington Avenue, an array of businesses underline the aesthetic. Among them: The Weeping Glass, a can’t-miss “Oddities & Curiosities” shop; metal-themed vegan eatery Onion Maiden; Dr. Tumblety’s “time-inspired specialty shop” with a secret speakeasy — pictured above — in the back (open for events only for now); the neighborhood’s anchor, Black Forge Coffee House; and decidedly cool nail salon Goodbye Lulu.

This explosion of dark-clothed businesses has gone beyond a coincidence. When it was The Weeping Glass and Black Forge, that was a coincidence. I think it’s by design, though, that Dr. Tumbelty’s — and its nascent distillery, Inspired by Spirits — moved down the street, and I’ll bet the same could be said about budding bar and event hotspot Bottlerocket Social Hall. This is a neighborhood on the upswing (particularly among folks with one or more coffin tattoos).

Meanwhile, plenty of the neighborhood’s other pleasures are still thriving; lauded takeout joint Leon’s Caribbean has a cool new neighbor in the form of Inner Groove Brewing. Alla Famiglia remains a special-occasion destination. And oh yeah — by the way, you can still afford to live around here.

At the Night Market, vendors and makers chatted with a massive stream of shoppers. This isn’t one of those big events where some booths follow a theme while others sell aluminum siding or fudge; every last seller in sight was offering something mysterious, unusual or macabre, from framed art to 3D-printed animal-skull decor. (I was particularly fond of a vending machine stocked with ephemera, from which I received a tiny tarot card — the King of Swords — and a small geode).

It’s an event that has gained a following on its merits, yes, but it’s also taking advantage of a particular clientele in the city’s only neighborhood where “odd art and ephemera,” as the Weeping Glass puts it, are in constant demand. And it speaks to a growing mystique around Allentown: The crowds and visitors may be congregating down on Carson, but up the hill, things are as mysterious as they are inviting.

So yeah: Let’s just say I live in Allentown.