All In The (Giaramita) Family: La Tavola Italiana and Pizza Taglio

Family members run two distinct restaurants, one classic and one with a contemporary spin. 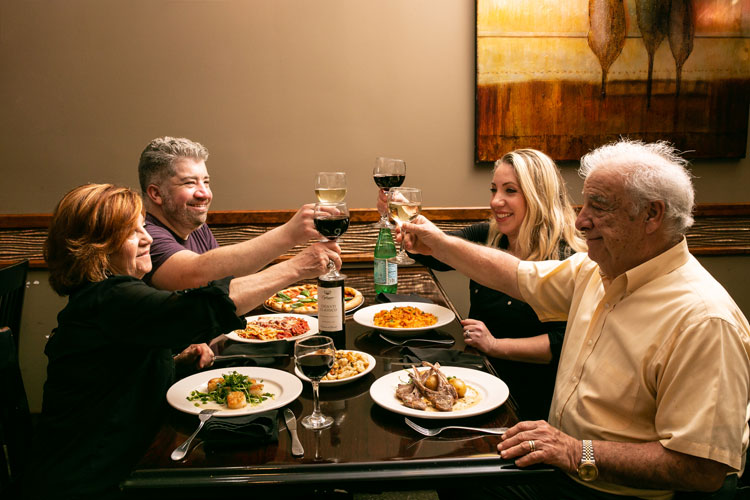 At La Tavola Italiana on Mt. Washington, Carmela and Joe Giaramita and their daughter Jolina call themselves “the triangle.” All three spend more than 60 hours a week weaving through the culinary and management tasks of their Italian restaurant, which this month celebrates its 25th anniversary. Well, maybe Carmela and Jolina do. “Me, I’m just the pizza maker,” says Joe.

He’s one of Pittsburgh’s longest-standing pizza makers, having started slinging Sicilian-style pies as a high-school sophomore in 1965. Joe and Carmela’s son, Tony, caught the pizza bug, too; he opened Pizza Taglio in East Liberty in 2015. Tony worked in the family restaurant when he was younger but took a different track; after eight years working as a lawyer, he became a student of craft pizza and has steadily worked to become one of Pittsburgh’s top artisanal pizzaiolos.

La Tavola’s dining room is a long, low-ceilinged rectangle with tile floors, minimal decor and tables draped in white cloths. The soundtrack is classic old-school Italian — opera and crooners, plus some jazz and the soft sounds of a singer such as Josh Groban. The crowd runs on the older side, too, but you’ll also sometimes find athletes such as Ben Roethlisberger and Jerome Bettis. The portions are large and reasonably priced. 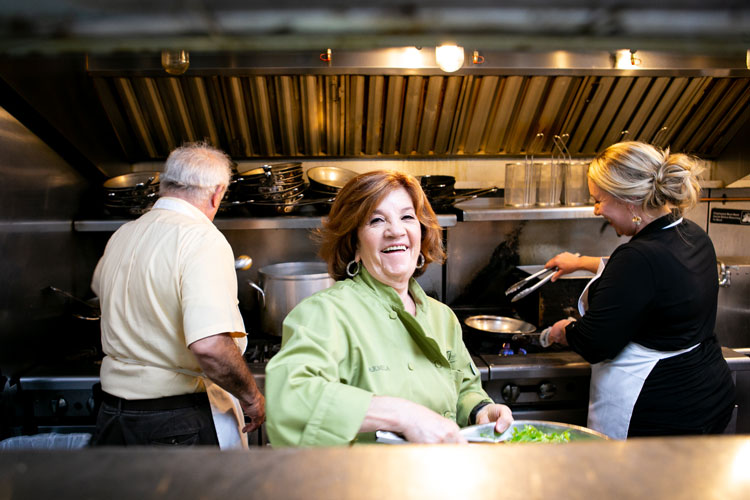 “People, they can go anywhere now to get a meal. So the beauty is how you treat them,” Carmela says.

Their story begins in Sicily, where both Carmela and Joe were born. Joe, age 9, flew to Pittsburgh in 1956 and was raised by an older half-sister, Josephine, who both adopted him as a son and started the Boggs Avenue pizzeria with him; in the early days it was called Josephine’s Pizza. “I wanted to come here and work, work, work. And that’s what I’m still doing. If you love what you do, it’s like you haven’t worked a day,” he says.

Carmela, who grew up in a nearby town, immigrated to New York in 1971 when she was 20. Joe’s childhood best friend suggested they meet, and Joe traveled to New York to do that. Fewer than two months later, they were engaged.

It’s a well-rehearsed story from a family that enjoys telling them. There’s a bit of “oh, are you going to tell that old tale again?,” which usually segues into someone else finishing the storyteller’s sentence. 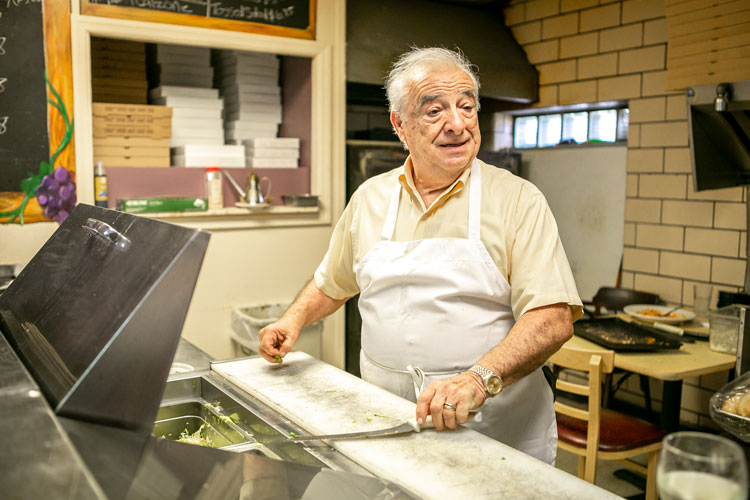 Joe ran the pizza place with Josephine (who passed away in 2007), and Carmela raised four kids — in addition to Tony and Jolina, they have two daughters, Giovanna and Gabriella, who don’t work in the restaurant industry. In 1994, with the kids old enough to take care of themselves, Josephine, Joe and Carmela decided to expand the pizzeria and open a restaurant. Carmela’s menu featured family recipes as well as her own culinary creations. She was inspired, she says, by her father. “Out of four kids, I was the only one to love it enough to do what he taught me,” she says.

Five years later, Jolina joined her mother in the kitchen. Jolina says her first few years were about mastering technique and understanding the chemistry of cooking. “I have a communications degree. I didn’t go to culinary school. I went to Carmela’s school of hard knocks to learn how to do this,” she says. 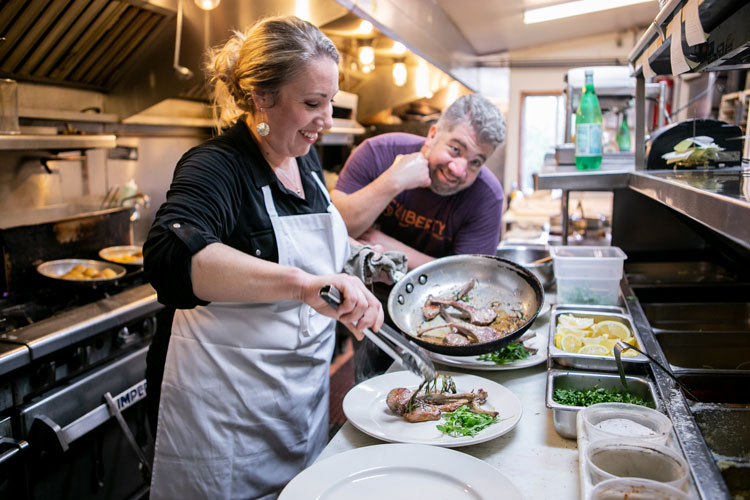 Now, she’s the restaurant’s executive chef, with Carmela theoretically serving in a support role; in practice, Carmela finds it hard to stay away from the restaurant and still is cooking on the restaurant’s 16-burner stove many evenings. “We get to work together every day. It’s a good life,” Carmela says.

Joe also is “semi-retired,” meaning that once in a while he’ll leave the restaurant. Often, it’s to go to the Strip to pick up ingredients, which his family says is as much an excuse for him to spend time catching up with his old friends as it is to do the shopping.

Tony, who counts the chef/owners of top culinary establishments such as Bar Marco, DiAnoia’s Eatery and Millie’s Homemade Ice Cream as his close friends, acknowledges, “In the Strip, I’m Joe’s son.”

The phrase you’ll most likely hear at La Tavola is, “However you want it, we can do it.” That means that broccoli, spinach and carrots might be added to pasta alla Carmela for a vegetarian diner, or that Carmela or Jolina might whip up an off-menu creation to please a regular or even an eager new customer. 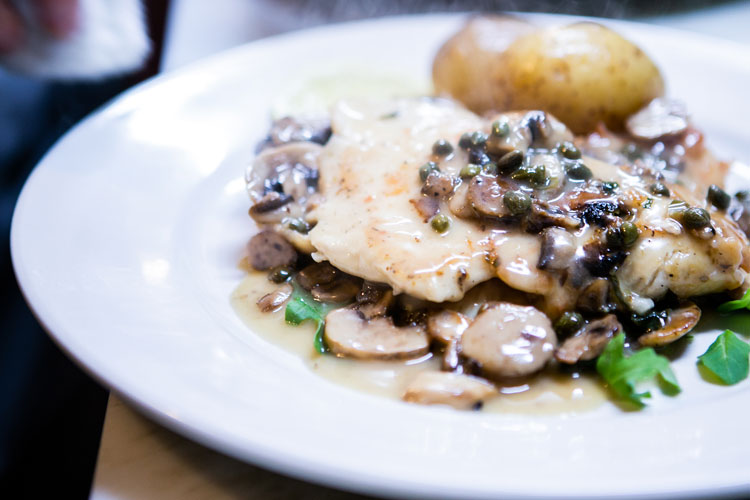 The menu tilts toward well-executed versions of familiar dishes such as veal piccata and spaghetti with meatballs, with more deeply rooted southern Italian and Sicilian dishes such as lamb with seared scallops appearing as nightly specials. Then there are the hybridized Pittsburgh-Italian dishes such as zucchini planks, greens and beans made with spinach, and scafazzatta, an Italian version of the Pittsburgh wedge; here, hot sopressata, milky buffalo mozzarella and bitter greens are stuffed inside baked pizza dough folded into a half-moon shape. That one hits all the right notes and, yes, they’ll replace the sopressata with vegetables if you ask them to (yet also pat you on the shoulder and wink at you when it’s clear you’re enjoying the meat-filled version). 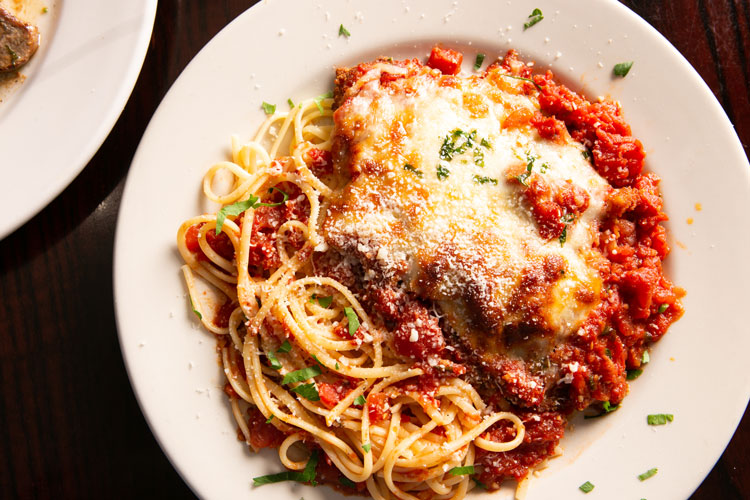 Still, on special occasions such as the Feast of Seven Fishes and Saint Joseph’s Day, Jolina and Carmela let loose with Sicilian dishes such as pasta con sardine (pasta with sardines, raisins and cauliflower) and falafel di vegetale (chickpea fritter with artichokes, fava beans and peas).

And, to celebrate the restaurant’s 25th anniversary, the Giramitas built “Carmela’s Courtyard,” where on weekends this summer Jolina will offer a vegetable-forward, “farm-to-Tavola” menu that celebrates the restaurant’s budding relationship with regional farmers such as Who Cooks For You Farm. 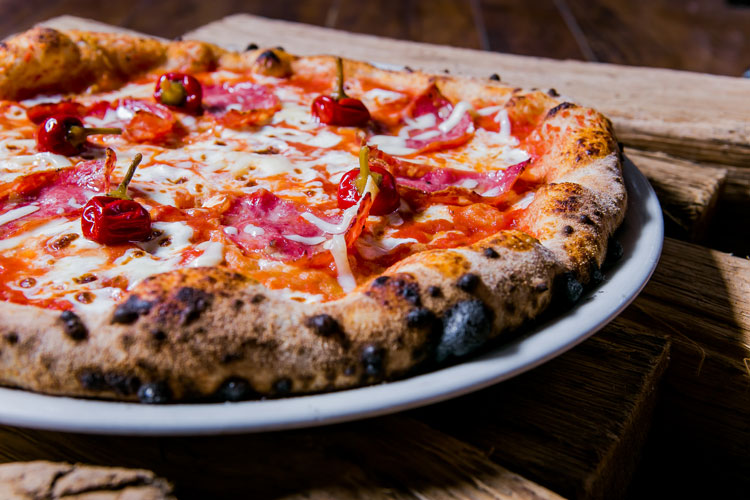 Pizza Taglio in East Liberty is very much in-the-moment. “I didn’t want to open the same thing. And I knew I wasn’t going to make better pizza than he does,” Tony says.

Picture windows open onto the street, displaying a younger crowd enjoying pizza with a bottom so thin that you sometimes have to eat it with a knife and fork. Tony’s wood-fired pizzas begin with a dough fermented long enough to impart a pleasing tang and a toothsome, airy pull. He leans closer toward minimalism than complexity with his toppings — preferring to max out at three — but is artful and seasonal with those combinations. For a white pizza, asparagus is paired with garlic, speck and mozzarella. On another pie, ramp pesto sets the stage for cremini mushrooms, sausage and mozzarella. And the purest pizza of all — the margarita — is a lusty eat at Taglio. Tony changes the canned plum tomatoes he uses for the sauce once or twice a year depending on the flavor of the harvest, and the pie is topped with mozzarella di bufala, extra-virgin olive oil, Sicilian sea salt and aromatic fresh basil.

One thing that’s transferred directly from La Tavola to Pizza Taglio is an effusive, familial style of hospitality. If Tony is working the floor, it’s quite likely he’ll put a knife and fork in your hand and smile when you enjoy the bite a little more than you would have if you’d picked it up. And although he prefers that guests order one of the thoughtfully constructed combinations on the menu, his instinct is to say yes — within reason, there’s only so much water-weight a pizza like his can handle — to whatever you want. 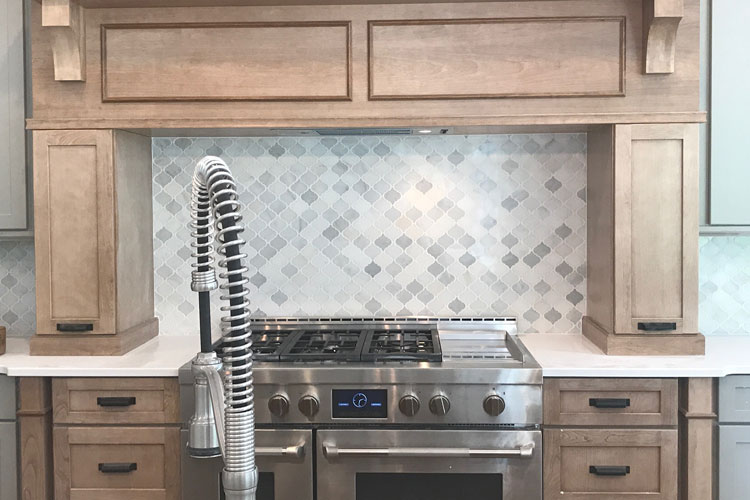 Lucky for him, he has some pretty good resources to turn to. “We aren’t people who open up a business and try to make a fortune by selling it next year. We are a family,” says Carmela.