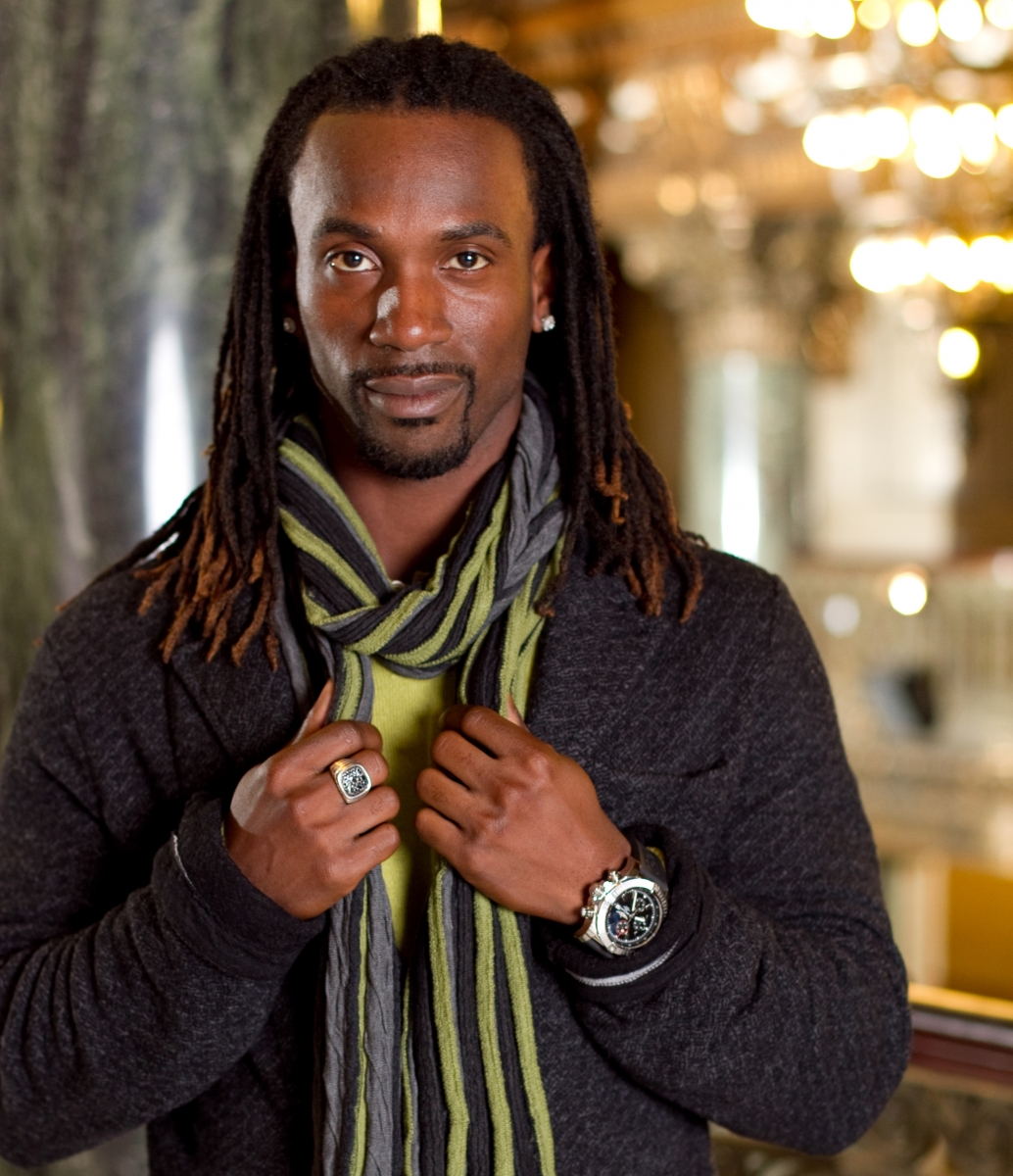 Andrew McCutchen hits men’s fashion out of the park with outerwear and suits for the season. Since Andrew is a name synonymous with our city's most influential figures, we took McCutchen (or Cutch, as he's known to serious fans) to some venues that bear that moniker — like Andrew Carnegie's Museum of Art and Music Hall, and the Warhol-inspired Andys wine bar at Fairmont Pittsburgh.

The stylish urbanite and Pirates outfielder had a breakout season this year, emerging as one of the most skilled five-tool players in baseball; day in and day out, Cutch demonstrated power, ferocious fielding, unyielding arm strength, serious speed and a formidable average (no wonder he just received his first Gold Glove).

Off the field, McCutchen has teamed up with The Pittsburgh Promise and Pittsburgh Perry High School's baseball program to create Cutch's Crew, a team of 14 students. Every month, Cutch shares his love of the game with the young ballplayers — offering the group a rare chance for up-close-and-personal training from an All-Star. Here, McCutchen shows us the swagger behind a season of grand-slam style. 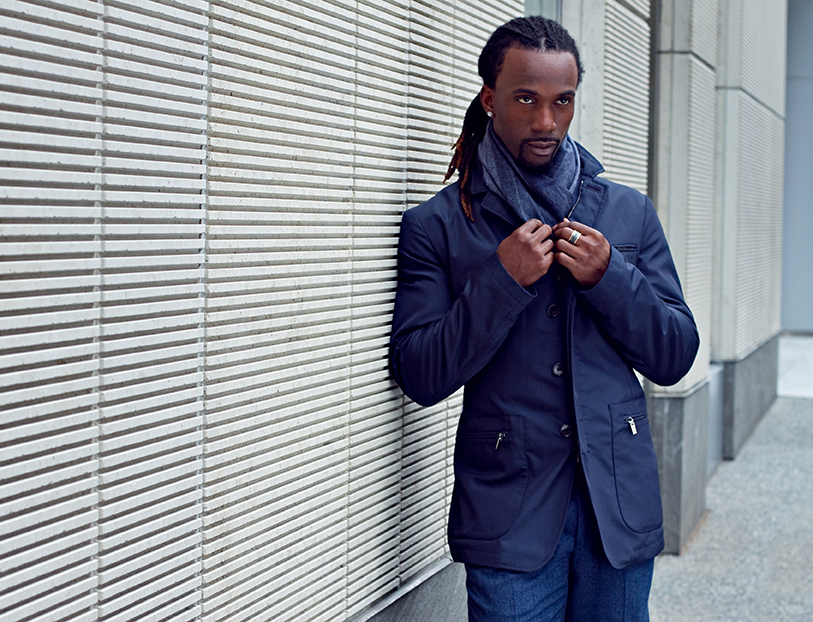 Prepare for a wall of winter weather to hit with this water- and wind-resistant city coat ($1,250) by Canali — a winning staple for the cold months ahead. Outside of Andys, McCutchen pairs the jacket with a slate-gray cashmere scarf ($335), also by Canali. Clothing from Larrimor's. His Gents Highway Man Spinning Ring ($625) in black rhodium sterling silver and 18 karat rose gold with black sapphires designed by Stephen Webster is available at Orr's Jewelers. 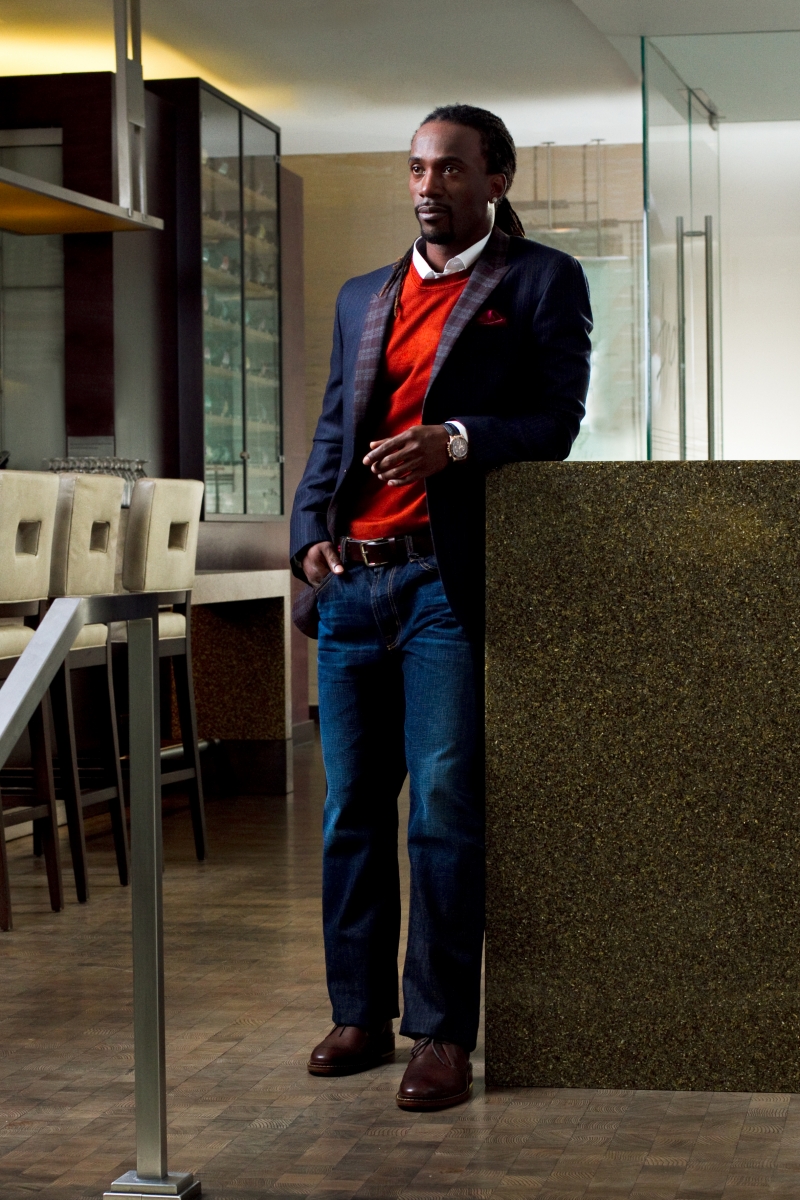 Smart casual best describes the dress code at Andys, the wine bar located inside the Fairmont Pittsburgh lobby; the spot features design influences from Andy Warhol (plus, it was partly named for Warhol and another local favorite: Andrew Carnegie). A pop of color infuses this navy pin-stripe blazer ($795) worn over a burnt-orange cashmere crew-neck sweater ($199) and white button-down shirt ($195), all by Sand, with braided leather belt ($375) by Etro and straight-leg jeans ($205) by Adriano Goldschmied. Attire and belt are sold at Charles Spiegel, with Cole Haan boots ($228) from Littles. McCutchen’s wrist gets extra attention with this 18K rose-gold Rolex Daytone Cosmograph watch ($28,800) with chocolate Arabic dial and black alligator strap.  Jewelry available at Henne Jewelers, which celebrates its 125th anniversary this year. 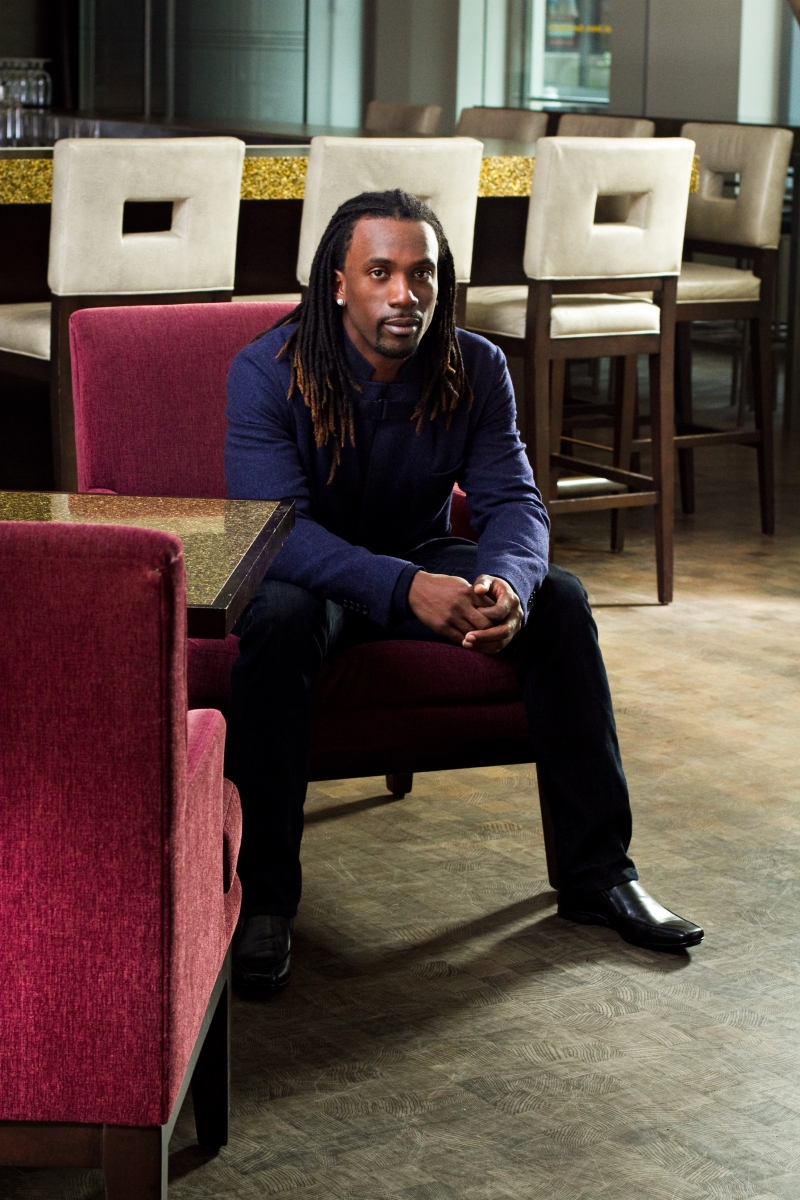 This navy-blue collar shirt jacket ($1,095) by ZZegna is worn over a navy-blue three-button henley ($165) by Vince and dark-blue jeans ($275) by ZZegna. All pieces are available at MODA. McCutchen’s Schwarz Georgia calf Hannibal shoes ($245) by Lloyd are sold at Bondstreet Shoes. 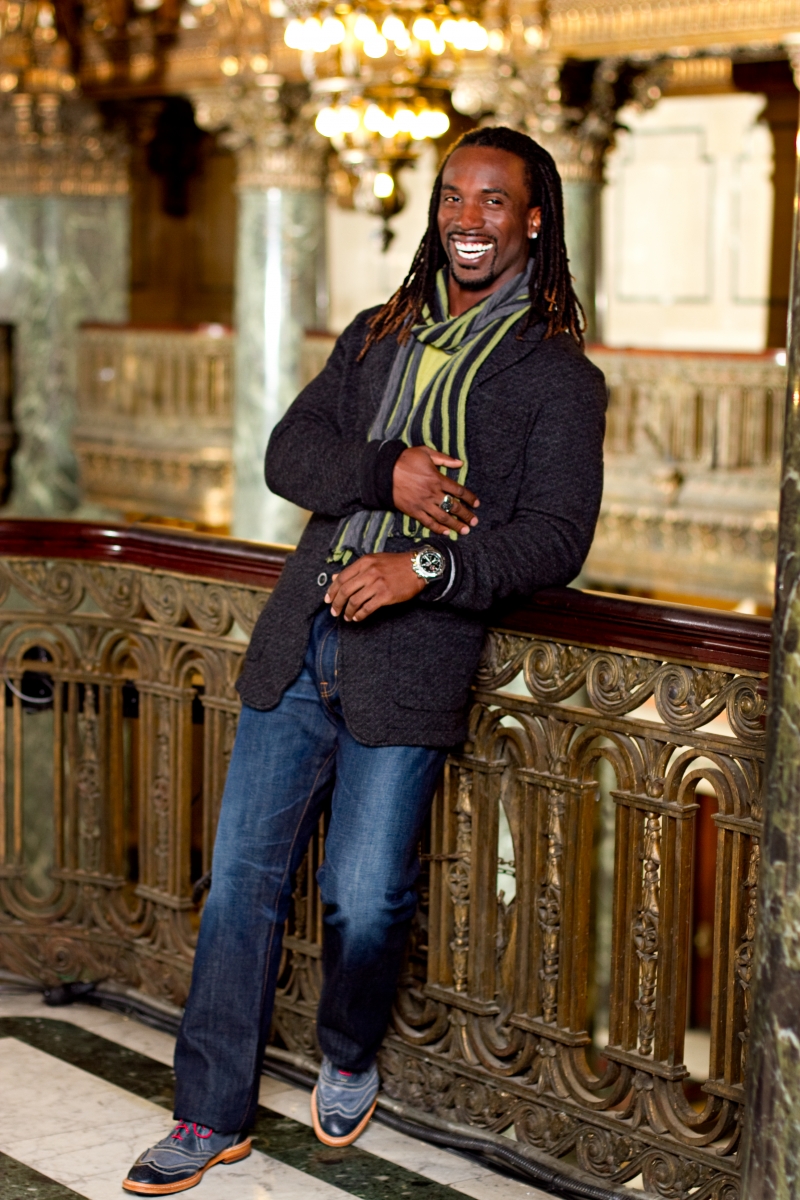 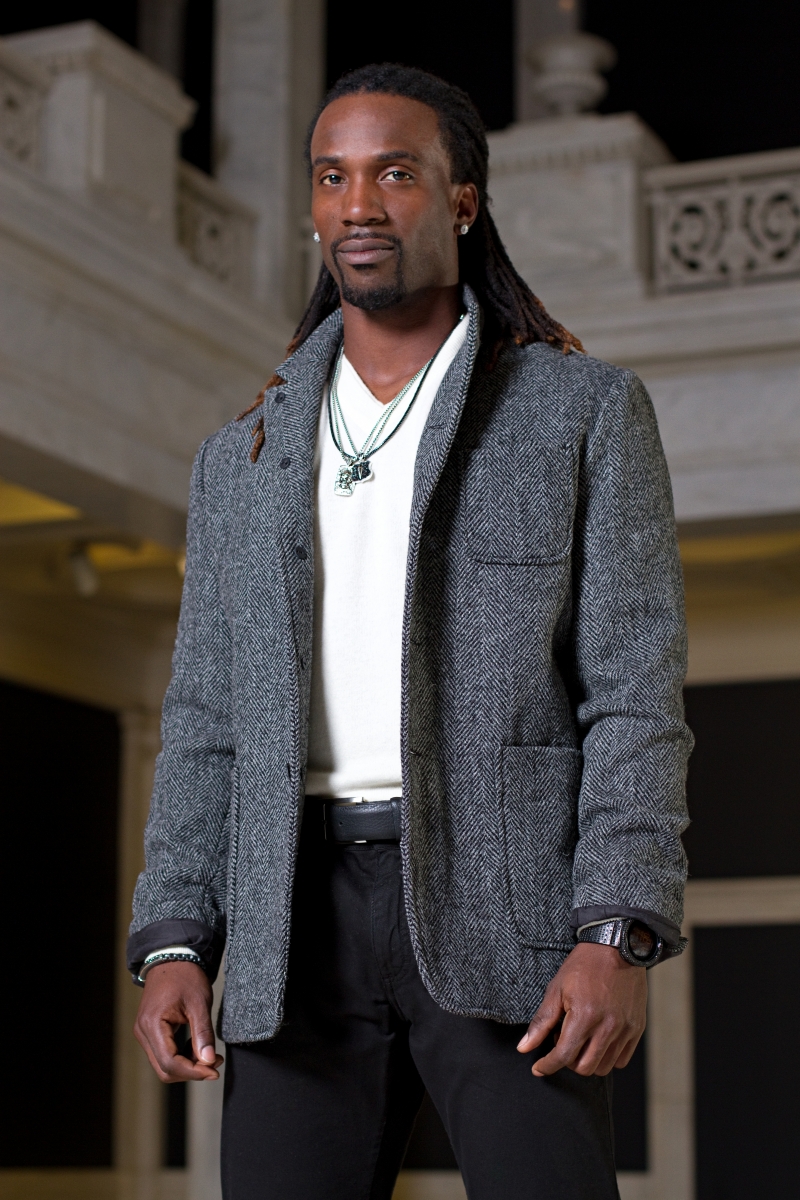 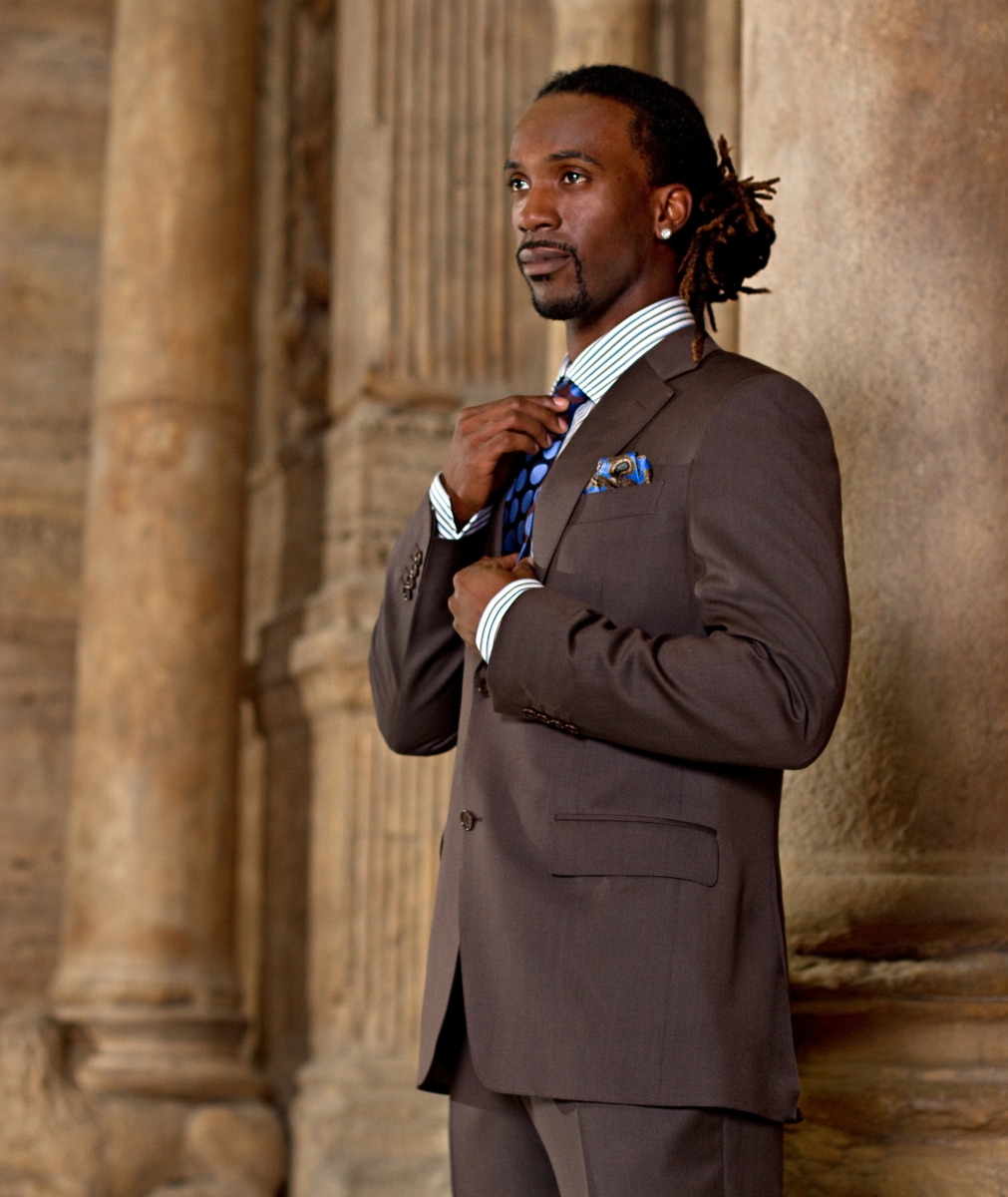 The Hall of Architecture at the Carnegie Museum of Art (above) has an unrivaled collection. Inspired by one of the seven wonders of the world, it boasts one of the largest collections of architectural casts. McCutchen dons a well-structured ensemble: this earth-brown suit ($1,775) with a blue and brown striped shirt ($255), both by Canali, as well as a brown and blue tie ($140) by Talbott, royal blue and brown paisley pocket square ($85) by Zegna. Available at Larrimor’s.

Watch: Behind the Scenes of the Shoot

This article appears in the December 2012 issue of Pittsburgh Magazine.
Categories: From the Magazine, Hot Reads, Style