A Thirst for Literature: Welcome to Books on Tap

The Carnegie Libraries of Pittsburgh offer 29 book clubs, but only one combines literature and beer. 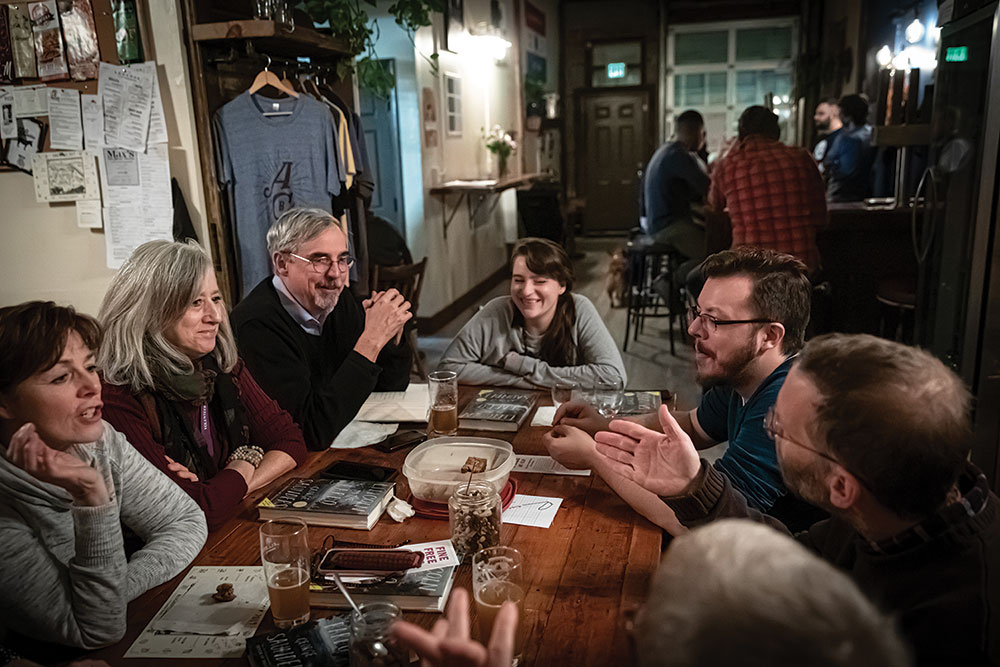 On an October night, 10 people sat at Allegheny City Brewing, beers in hand. The topic of discussion, however, was not local news, sports or politics: It was “Where the Crawdads Sing,” a novel by Delia Owens.

The small group — couples and singles, younger-ish and older-ish — attended the gathering, a meeting of the Books on Tap book club. Each had read the 2018 coming-of-age, nature-infused murder mystery; the group gave “Crawdads” mixed reviews, making for animated discussion. Was the dialogue good, the dialect offensive, the plot hole excusable, the murder mystery worth it, the telescoping into the future effective?

“I was carried away with [the main character] in the swamp,” said Carolyn Hatcher, a first-timer. “It allows you to really realize how beautiful it was — every word.”

Members also shared their thoughts about the abject poverty and social isolation in which the main character is raised.

“It takes your breath away,” regular attendee Richard Johnson said, “when you think about the number of people who could make incredible contributions to life and aren’t able to because outside forces prevent them from doing that.”

Books on Tap, affiliated with Carnegie Library of Pittsburgh, gains new members through library communications as well as curious brewery patrons. The group has been meeting from 6 to 7:30 p.m. on the third Wednesday of the month for almost three years; the congenial personalities of longtime members make it easy for newcomers to join in.

“It says a lot about the library,” co-leader Alicia Angemeer says. “They pay attention to the community.”

His wife, fellow regular Laura Morgan, had been a part of other clubs before. “It was hell,” she says; no one ever read the books. “I felt like I was a problem [because I actually read].” Books on Tap, however, “is free-wheeling, it’s open, it’s participatory, there’s no judgment.”

The group laughed at the no-judgment part. OK: there’s judgment about the books, but not about the people. And despite the setting, the club is more about the books than the brews. No one had more than one drink during the main discussion and no one is criticized for ordering water or soda instead.

Every few months, the group picks through the library’s list of available titles. The library provides a book club kit (also available for non-affiliated groups) with regular and large print books, as well as audio versions; the library is gradually adding discussion questions, author bios and other supplemental information to the kits.

The group is one of 29 Carnegie Library book clubs, across different branches, which cover topics from cookbooks to comics to classics to culturally specific groups — such as Migrations: A Black History Book Club, based in East Liberty. Before starting a new club, the library looks at branch demographics, popular books and the best way to match interest and approach. “Overall, it’s become a very popular and in-demand category of programming,” says Dan Hensley, Carnegie Library’s adult programming coordinator. “Some of the more creative approaches to book clubs are growing fast.”

This article appears in the January 2020 issue of Pittsburgh Magazine.
Categories: Hot Reads, Things To Do