Share Your Story at the New Story Club Pittsburgh

The organization aims to continue live storytelling following the closure of The Moth. 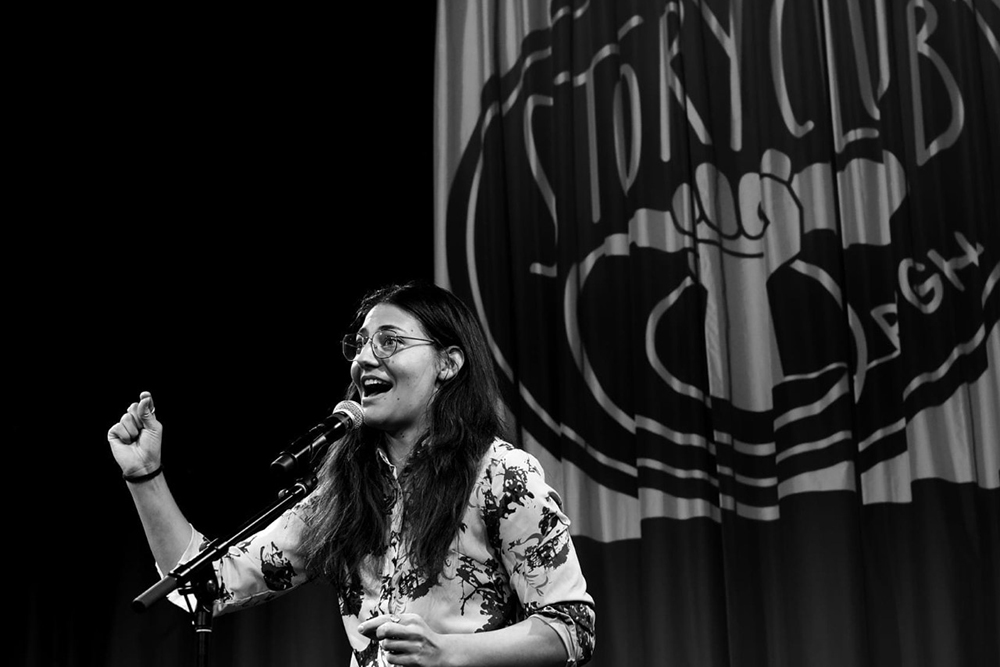 Everyone has a story to tell — and it’s often a story that can only be told by them. If you have the courage to do so, Story Club Pittsburgh wants you to take the stage.

Story Club Pittsburgh offers performers a chance to deliver eight-minute, nonfiction stories based around a particular theme each month. The next show is scheduled for Tuesday, March 15, with the theme of “culture shock,” in partnership with the World Affairs Council and City Theatre.

Kelly Flanagan Dee is a producer with Story Club Pittsburgh and former producer of award-winning podcast and radio show The Moth, which shut down local production during the pandemic. Along with former Moth host Alan Olifson, she began preparations in 2021 for the first post-COVID Story Club Pittsburgh event; it took place in February at City of Asylum’s North Side venue as well as via livestream.

“The goal of Story Club is to combine the spontaneity of an open mic with live theater through true storytelling,” Dee says. “And that can look like stories told from the heart [and] memorized, or they can be read. They just need to be true and about you and your story to tell.”

Admission is free; hopeful performers can reserve slots and sign up to take the stage up to 30 minutes before the show starts. In addition to the open-mic portion of the show, the evening also features curated performers selected by the producers.

Since she worked for The Moth for 10 years, Dee has heard a wide range of stories, often in the same night. Other than the basic theme and time constraint, people are free to take any tone they like.

Story Club, which launched its first chapter in Chicago in 2009 before spreading to six other cities, also gives people from different walks of life a chance to get to know each other, creating a community of storytellers that continues to grow.

“You connect with other people in a way that you might not have expected, right? So a college student might find themselves connected to someone who used to be a steelworker.

“You might not have met that person on the street and realized that you had something in common,” Dee says.

She adds that Story Club is dedicated to building a space open to all.

“Our hope is to continue to build on the storytelling community that has grown in Pittsburgh,” Dee says. “We want to see it become something that people find accessible and welcoming and inclusive. And we’re excited to do that through what we’re doing and continue to listen to the community as we grow it around Pittsburgh.”