Guess what? The Pirates home opener almost is here. In the meantime, pay homage to baseball legend Roberto Clemente’s with the Clemente 3,000 T-shirt. 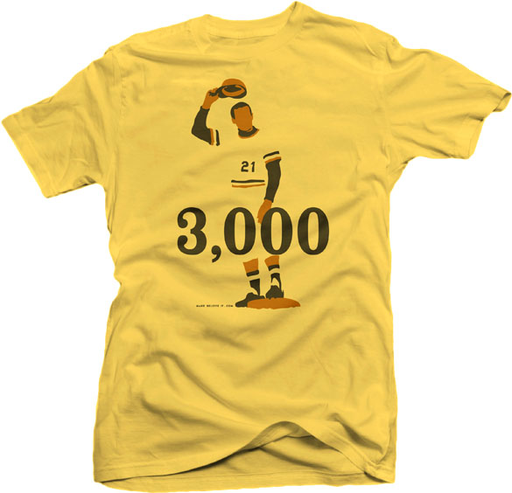 With opening day for the Pittsburgh Pirates fast approaching (this is going to be the year we win the World Series — we know it!), we’re checking out fun gear you can wear to show off your black-and-gold pride at the April 13 home opener against the Detroit Tigers.

While there is plenty of Buccos paraphernalia out there, we particularly like this gold Roberto Clemente T-shirt ($25), which has a message that’s even cooler than the design. Pittsburgh designer Nick Caruso created the shirt as part of his “Make Believe” line, and it pays homage to one of baseball’s greats — both on and off the field.

As any Pittsburgh sports fan worth his or her salt knows, Clemente spent 18 years with the Pirates organization. The Hall-of-Famer got his 3,000th major league hit in 1972, in what turned out to be his last professional appearance at the plate before he died in a plane crash on his way to Nicaragua to deliver aid to earthquake victims.

This article appears in the March 2015 issue of Gotta Have It.
Categories: #GottaHaveIt