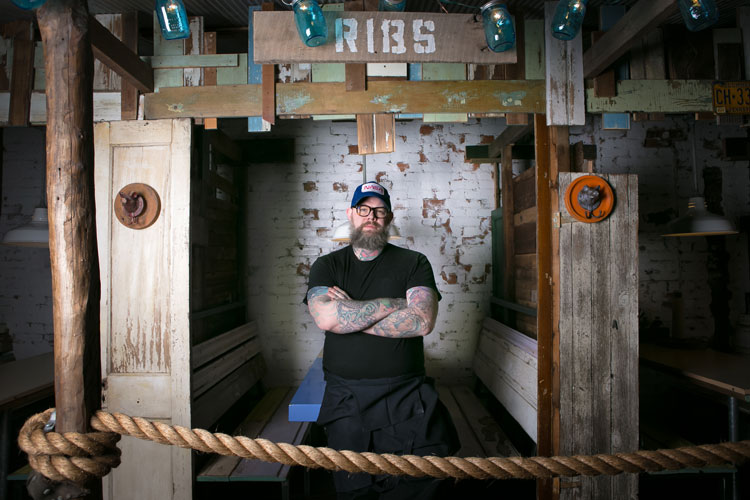 It’s been five years since Keith Fuller, 37, last helmed a Downtown restaurant. “When we opened [Six Penn Kitchen] it was us, Toni Pais, Sonoma Grille and just a few other places. Pittsburgh was a meat-heavy, large-sandwich type of place,” he says. “I hope I was one of the people who helped change that.”

Fuller recently joined forces with the Richard DeShantz Restaurant Group (Meat & Potatoes, Butcher and the Rye and täkō) as chef and partner of Pork & Beans, a new barbecue restaurant that is helping to make Downtown a dining destination.

Fuller now is one of the most influential chefs in Pittsburgh, but when he first moved here in 2005 for a job as sous chef of Six Penn, he still was developing his culinary voice. He cut his teeth at Yours Truly, a casual restaurant in Hudson, Ohio, working as a dishwasher. He later was promoted to line cook after he turned 18.

“I loved it. I decided after [attending] vocational [high] school that cooking was a better fit for me,” he says. 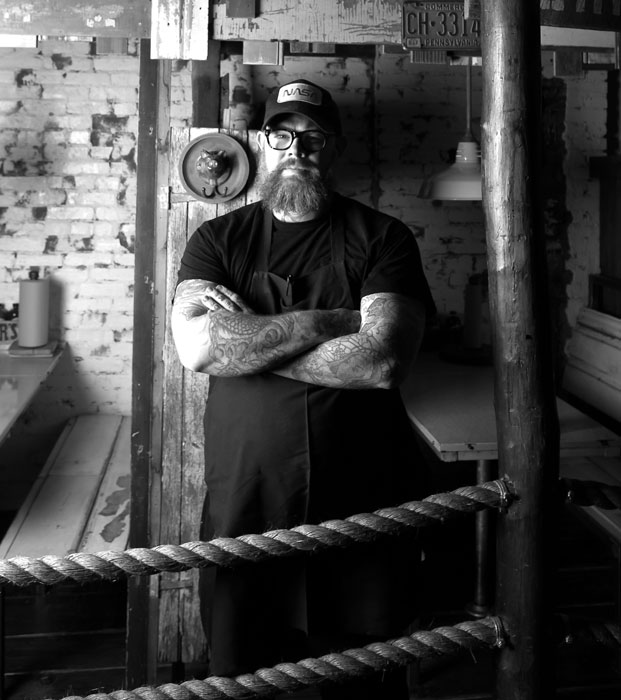 Fuller moved to Dayton, Ohio, and then to Philadelphia in 2000, where he dug deeper into the fine dining world at Jake’s and Cooper’s Wine Bar.

But it’s in Pittsburgh where Fuller truly began to shine as a chef. He was promoted to executive chef of Six Penn in 2008 and opened his own restaurant, Root 174, in 2011 in Regent Square. There, he garnered both local and national recognition (including inclusion on Pittsburgh Magazine’s Best Restaurant list from 2012 to 2016) for his artfully composed plates and for pushing-the-limits proteins, including lamb necks and duck testicles.

Now back Downtown, he’s aiming for something different. “I’ve always worked in fine dining. Going into this realm of everyday food, of not putting 18 components on a plate is something I’m excited about.”

Ironically, he’s doing that with a meat-heavy focus at Pork & Beans. But instead of low-grade, low-effort dishes, Fuller — along with DeShantz and James Ciminillo — are aiming higher in their efforts. Fuller is working on perfecting his smoking technique and adding his own composed spins to daily specials such as walking tacos and barbecue pork belly fried rice with grilled scallions, garlic and red pepper soy glaze.

More importantly, he’s doing it with a gusto and maturity that he felt was missing in his first go-round. “I’m a much calmer person and a chef than when I was at Six Penn,” says the soon-to-be father.

This was the best mistake I ever made at Root 174. I ordered an extra case of Brussels sprouts and [needed to run] a special to get rid of them. The special became an instant hit. I had a bacon glaze on our scallop dish that I thought would complement the sprouts. The masa flour adds a nutty corn flavor that accents the slightly bitter Brussels sprouts.

Directions: Blanch Brussels sprouts in boiling, salted water for 3 minutes; immediately transfer sprouts to ice water to stop the cooking process. Remove sprouts from the ice water after about one minute and set aside to allow sprouts to return to room temperature.

Cook the bacon in a large skillet over medium-high heat until crisp, about 5 minutes, stirring occasionally. Transfer the rendered bacon to a plate lined with a paper towel. Pour the bacon fat into a heatproof container and reserve for another recipe. Combine the port wine and brown sugar in the skillet and cook over medium heat, stirring frequently, until the mixture becomes thick, like a syrup. Remove from the heat and stir in the rendered bacon and black pepper.

Thoroughly combine the masa and all-purpose flours in a large bowl. Dredge the Brussels sprouts in the mixture. Shake off excess flour using a slotted spoon or colander. Fry in batches in 350° vegetable oil until golden brown. Remove from the oil with a slotted spoon, place in a mixing bowl, and toss with salt and pepper, to taste. Transfer sprouts to a serving vessel and drizzle with the glaze.