An iconic Downtown department store is now part of the train display at the Carnegie Science Center. 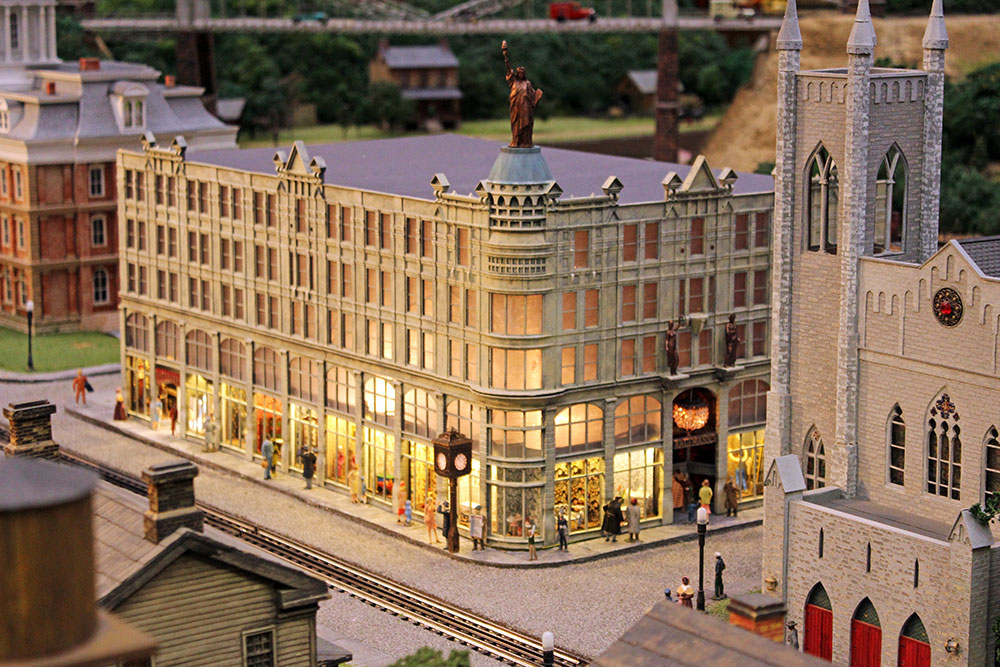 Each year, the Carnegie Science Center adds a structure to its intricate Miniature Railroad & Village exhibit depicting scenes from the history of western Pennsylvania. For the railroad’s 100th anniversary, it needed to be something grand.

“For the exhibit’s centennial anniversary, we knew this year’s model had to be extra special, a place Pittsburghers feel a sentimental connection to, the way they feel connected to this very special timeless exhibit,” says Kim Amey, Carnegie Science Center interim deputy director.

The scaled replica of the store features its original rounded edges (which distinguishes itself from the Kaufmann’s building that replaced it in 1912), a Lady Liberty statue perched on top and the goddesses of commerce and justice adorning the front door. There are 15 miniature window displays and a Swarovski crystal chandelier. But you won’t see the windows of the Grand Depot decorated for Christmas as the Kaufmann’s store was known for. Curator of Historic Exhibits Patty Everly says this is because the railroad exhibit is divided into four seasons, and the Grand Depot sits within the summer section.

The clock, made popular by the phrase “meet me under the clock” for generations of Pittsburghers, was originally freestanding, as it is in the exhibit.

Kaufmann’s was founded by a family of Jewish-German immigrants in the 1870s as a small store in the South Side before moving Downtown. The Kaufmann’s store as it existed throughout much of the 20th century was too large to replicate in the village, but the Grand Depot fit.

“It adds diversity to our display and helps to tell Pittsburgh’s rich immigrant story,” Everly says.

Allegheny County Executive Rich Fitzgerald, who was on hand for the unveiling of the addition, says he remembers visiting the railroad exhibit with his family.

“Whether you’re a child or an adult, the magic of a village with trolleys moving down the streets, trains traveling to and fro and in and out of tunnels, and the excitement of identifying or discovering scenes you’re familiar with will always make the Miniature Railroad and Village an important holiday tradition in this community,” he said as part of a proclamation.

The Miniature Railroad originated in 1919 in the Brookville home of Charles Bowdish, who created it to display at his brother’s wedding. It outgrew his home and moved to the Buhl Planetarium and Institute of Popular Science in 1954. It moved to the Science Center in 1992. Last year, Donora’s Cement City was added to the display; Primanti’s was added the year before. It includes more than 100 animations, 250,000 trees and replicas of landmarks from Forbes Field to Luna Park to Fallingwater.