A Deliberate Pace: He's Seeing the World One Step at a Time 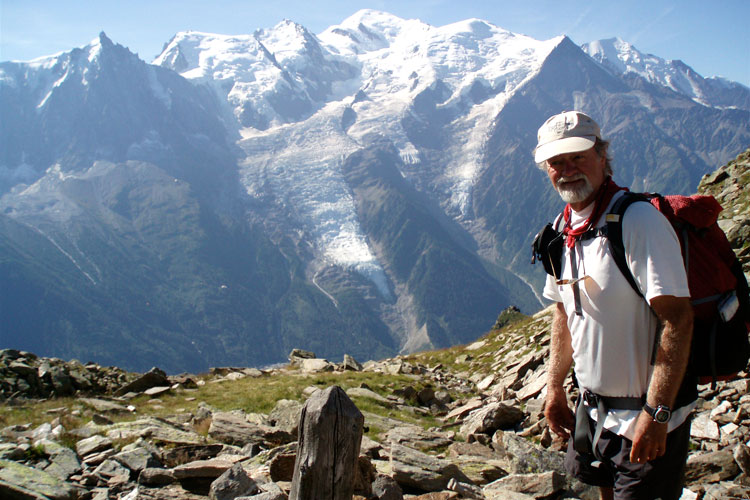 Award-winning travel author Brandon Wilson has trekked across the Alps and Himalayas, photographed mountain gorillas in Africa and led expeditions to search for Sasquatch in the Pacific Northwest while hiking for more than 7,500 miles. His résumé includes four books, visits to nearly 100 countries and a walk across an entire continent, but the roots he’s stretched around the globe trace back to childhood walks along the Forbes Trail and elsewhere in western Pennsylvania.

A native of Sewickley who grew up in Moon Township, Wilson was 6 years old in 1960 when he served as co-pilot on an out-and-back road trip from Pittsburgh to Los Angeles with his father Edgar, a school administrator and history teacher. Brandon sat in the backseat of the red-and-white ’56 Chevy to rubberneck at the lavender stripes of the Painted Desert, re-imagine the bustle of frontier posts such as Dodge City, and confront the bloody memories of Civil War battlegrounds.

By his freshman year at Moon Area High School, Wilson was stringing as a writer for the Coraopolis Record and Moon Bulletin newspapers. He studied broadcasting at the University of North Carolina at Chapel Hill and later theater as a graduate student at the American Academy of Dramatic Arts in New York City.

After college, Wilson hopscotched around the West to jobs in Seattle, Eugene, Ore., and Boulder, Colo. Along the way, he met Cheryl, a television producer from Los Angeles. After three years in Alaska — including Brandon’s frigid turn as assistant to the mayor of Barrow, the northernmost city in the United States — the couple moved to Hawaii and married in 1989.

Since then, Hawaii has served as the Wilsons’ launchpad to destinations the world over. A yearlong, around-the-world trip kickstarted their passion for travel, but the trip that changed Brandon’s travel philosophy and shaped his life’s work came a few years later.

In 1992, the Wilsons set their sights on a hike through the Himalayas via an ancient Buddhist pilgrimage trail from Tibet to Nepal. The Chinese government declared the trip impossible, but the Wilsons decided to apply for a visa anyway. The day before they submitted their applications, the border opened for the first time since the 1950s. Racing the winter snows — and at one point dodging gunfire from Chinese soldiers near Mount Everest — the Wilsons completed the 700-mile trek to Kathmandu, becoming the first Western couple to do so.

That journey became the subject of Wilson’s first book, Yak Butter Blues, and opened his eyes to a new way of travel. As with the road trip he once took with his father, the trek wasn’t just about covering a distance but served as a spiritual quest for a greater purpose in life on a route of historical significance. It was also the couple’s first major trip on foot, which opened their eyes to the benefits of a more deliberate pace.

"We finally discovered after our trip across Tibet, that what we really enjoy is the slow travel, the walking,” Wilson says. “The chance to connect with yourself and to reconnect with nature … we found it a walking meditation.”

That feeling had the Wilsons hooked. After Tibet, they sought out additional pilgrimage trails as Brandon closed his advertising agency and dedicated himself to travel writing full-time. He knocked off the Camino de Santiago in Spain and St. Olav’s Way in Norway and Sweden, and he became the first American to hike the Via Francigena from Canterbury to Rome. During six months in 2006, Brandon blazed his own pilgrimage trail, The Templar Trail, retracing the ancient route of the Crusades on a 2,600-mile, transcontinental trek from France to Jerusalem.

“Some days I’d be walking,” he says, “and I would almost feel like I was walking with everybody who had walked that path before over the last 1,000 years.”

At 63, Wilson says he has no intention to stop hiking and climbing mountains. In November, his work was featured in a trekking anthology, The Walkabout Chronicles, and he and Cheryl plan to move to the French Alps later this year. There are more adventures to be had, and the Great Himalaya Trail remains at the top of his bucket list.

Despite all of the people and places Wilson has seen in his prodigious travels, there’s still one thing he’s never encountered out on the trail: another Pittsburgher.

“A lot of other places, but no, nobody [from Pittsburgh],” he says. There is a certain amount of anonymity when you're walking. You can share or not share, but nobody forces you to. lt's not always the first question out of your mouth."

For those looking to follow in Wilson’s footsteps — whether on a trek around the world or a stroll around Pittsburgh on a lunch break — his advice is simple: Wear comfortable shoes, travel light (if possible, without a cell phone) and just go.

"It's just a matter of setting your priorities,” Wilson says. “We get so caught up in the noise and the business of what we have to be doing … sometimes it’s just about taking that first step.”

This article appears in the April 2017 issue of Pittsburgh Magazine.
Categories: Sports