A Day in the Life of Andrew Stump

What's a typical work day like for the co-owner of Madeline Bakery & Bistro? 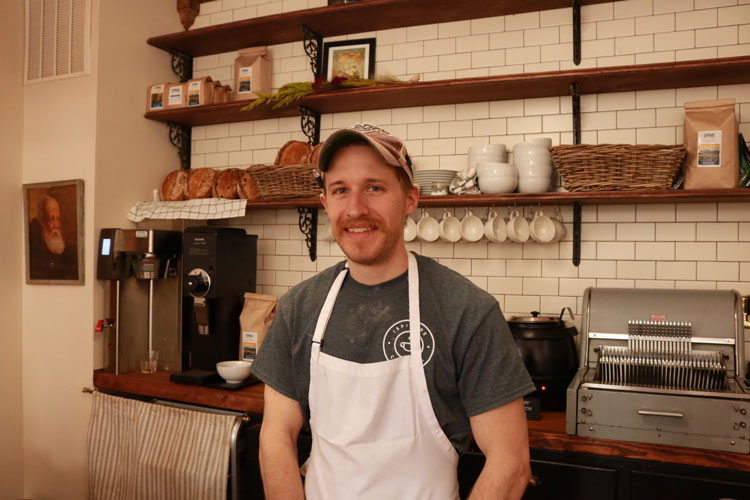 We want to see how people in Pittsburgh's restaurant industry spend their hours — their daily tasks, routines and surprises that their days may bring. In our first installment we visit Andrew Stump, baker and co-owner of Madeleine Bakery & Bistro.

Tucked away in a square in Wilkinsburg is Madeleine Bakery & Bistro. The warm scent of delicate, yeasted baked goods and hearty loaves of bread washes over guests as they enter the small shop. The bakery and cafe, owned by Andrew and Abigail Stump, opened in December 2017. Prior to opening Madeleine, Andrew honed his skills in Nemacolin Woodlands Resort's fine-dining restaurant Lautrec, Five Points Artisan Bakeshop and other establishments around Pittsburgh.

Upon arrival, Andrew sets to work shaping laminated pastries such as classic croissants, pain au chocolat, plum danish and kouign amann. All of these take three days to make. On day one, the dough is made and butter is rolled into a square slab, which will be enveloped by the dough during the final rollout on day two. The butter is folded with the dough many times to create the characteristically flaky layers of puff pastry. On day three, the pastries are shaped, proofed and baked. Typically, Stump finishes the baking process by 9 a.m., which is followed by a thorough clean-up.

By 10, Andrew begins to prepare for the following day — taking stock of what needs to be done and starting on macarons, which Madeleine began offering in July. Approaching the lunch hour, Andrew also preps vegetables for salad before putting the macarons in oven.

Madeleine serves a small lunch menu along with their bread and baked goods, offering a seasonal salad, soup and sandwiches. Andrew himself doesn’t have time for lunch, subsisting instead on bread scraps and copious amounts of coffee.

Around noon, the café menu, which typically hangs from the ceiling above the shop counter, falls down. This inconvenience, along with that of a leaking roof thanks to recent heavy rains, would have once troubled Andrew immensely. Nine months after opening, he’s learned to take these mishaps in stride.

In the early afternoon, Andrew prepares for the Wilkinsburg Thursday Open Market, at which Madeleine is a regular vendor. He does not stay for the duration of the market, but helps to set up the employee-run booth before heading back to the bakery. Due to a staffing shortage, Andrew steps up to run the shop counter while finishing macarons.

Madeleine closes at 6 p.m., and Andrew is able to go home by 7:30. His evening winds down with a quick shower and dinner — broccoli with garlic sauce from How Lee in Squirrel Hill. After spending time with his wife, Abigail, he heads to bed around 10, to get some sleep before rising, once again, at 4.