7 Can't-Miss Movies to Enjoy: Cinema in the Park Returns

Bolstered by the new Spark! Film Series, the annual Dollar Bank Cinema in the Park lineup brings great films to some of Pittsburgh's most beautiful spots. 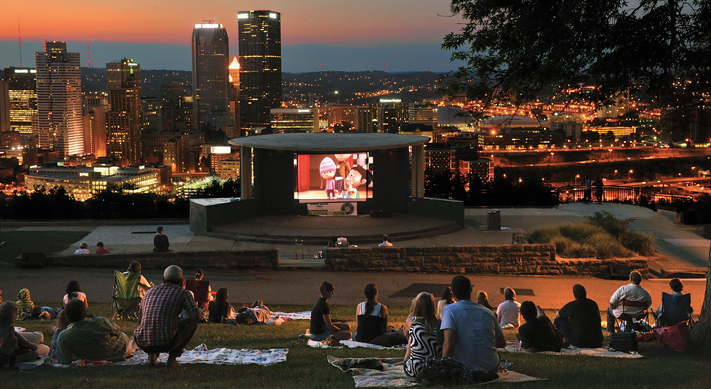 PHOTO VIA DOLLAR BANK CINEMA IN THE PARK

’Round here, our days of warmth and dryness are few enough that we tend to make the most of them. Whatever our activity is, we’d generally prefer to do it outside if the sun is shining and the mercury is (not too) high; Stage AE is an entire venue built on this principle. Eating and drinking? Head to the patio. Getting some work done? Laptops and WiFi are waiting. Exercise? Combine your favorite activity (yoga, Pilates, whatever Crossfit is) with the phrase “in the park.”

And movies, of course, are no exception. There are the drive-in theaters for the new stuff — but there’s also the annual Dollar Bank Cinema in the Park series, put together by Citiparks. This collection of classics, recent hits and family favorites aims to provide al fresco alternatives for your Netflix queue and Blu-Ray player in some of the city’s most picturesque settings.

This year, Cinema in the Park also includes the brand-new Spark! Film Series, a project of Mayor Bill Peduto’s Welcoming Pittsburgh Initiative. The series adds a half-dozen films intended to start — sorry, spark — cross-cultural conversation to the Cinema in the Park lineup; each of the seven city parks that host films will show at least one of the half-dozen Spark! selections.

That part of the lineup: “Million Dollar Arm,” about the two Indian athletes who won a reality-show competition seeking potential big-league pitchers (and were eventually signed by the Pirates); “The Refugees of Shangri-La,” a documentary about Bhutanese refugees settling in America; “Cesar Chavez,” actor/director Diego Luna’s biography of the labor and civil-rights leader; “Selma,” the Academy Award-winning drama about the 1965 Selma-to-Montgomery marches; “McFarland USA,” Disney’s sports drama about a predominantly Mexican-American cross-country team competing in 1987 California; and “Cantinflas,” the Mexican-made biography of the comic actor Cantinflas, often referred to as the Charlie Chaplin of Mexico.

All six of those films would make for a fine night under the stars — but for extra credit, here’s an After Dark-approved, can’t-miss choice for each of the seven parks that will put up a big screen this summer.