Looking for something to do while you’re in town? Check out the calendars offered from these organizations, just a few of the many worthy groups in Pittsburgh.

Arcade Comedy Theater hosts inventive and uproarious stand-up, improv and sketch shows every weekend. The best local performers share the calendar with special guests from far and wide; look for recurring favorites such as the Dungeons & Dragons-themed “Knights of the Arcade” and the competition-style “Comedy Royale.”
(943 Liberty Ave., Downtown; arcadecomedytheater.com)

August Wilson African American Cultural Center is a striking, vibrant art space on Liberty Avenue and an anchor of the Cultural District. It focuses on the Black arts experience throughout history and also the experience of Black artists in Pittsburgh; a varied calendar of events includes theater, dance, music and much more.
(980 Liberty Ave., Downtown; awaacc.org)

The Carnegie of Homestead Music Hall is both one of Pittsburgh’s oldest performance spaces (dating to 1898) and one of the busiest. The theater has a full calendar of touring bands, comedians and more, from legends to cult favorites. Stand-up is a specialty here, as plenty of comedy heavyweights opt for the Music Hall when they stop in Pittsburgh; the likes of Marc Maron, Tig Notaro and Sinbad have taken the stage in recent years.
(510 E. 10th Ave., Munhall; librarymusichall.com)

Chatham Baroque specializes in breathtaking music performed in beautiful and acoustically rich spaces. Chatham Baroque performances are made up of music from the Middle Ages, Renaissance, Baroque and Early Classical periods. The ensemble has toured the United States, Canada, South America and the Virgin Islands and was lauded as “one of Pittsburgh’s greatest treasures” by the Pittsburgh Post-Gazette.
(chathambaroque.org) 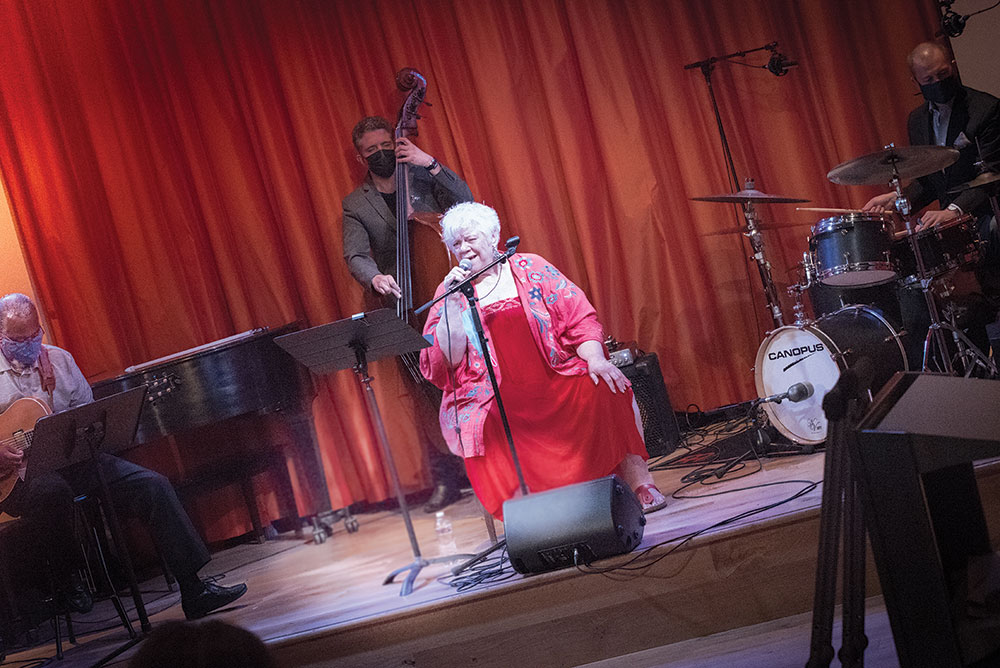 City of Asylum is a key part of the literary ecosystem of Pittsburgh. The nonprofit hosts (and houses) writers in exile and has become an ever-increasing force in the city’s literary community, using its excellent Alphabet City bookstore as a home base. It holds events that showcase musical and literary talent, often by oppressed or exiled musicians and authors.
(40 W. North Ave., North Side; cityofasylum.org) 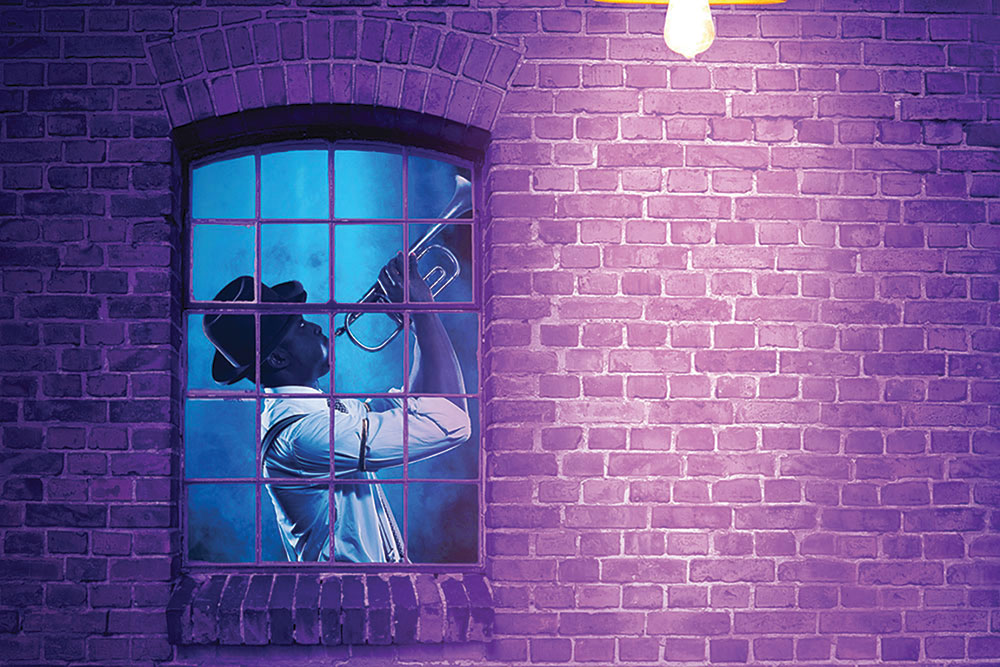 City Theatre is a South Side-based company that has since 1975 presented challenging, dynamic plays, with a focus on contemporary plays that are brand new to Pittsburgh audiences, including the occasional world premiere. The theater’s location off of East Carson Street also makes this a great option for those looking for dinner before a show — or, if you’re willing to brave occasionally rowdy crowds, a drink after. (1300 Bingham St., South Side; citytheatrecompany.org)

Club Cafe is a cozy venue that serves as a place for discovery — you go to Club Cafe to investigate a performer. It’s a pure, exciting process; pay a few bucks (and usually just a few) and see if one hour of up-close music can make you a fan. The calendar at Club Cafe, also located in the heart of the South Side, includes music, stand-up comedy, burlesque and more.
(56 S. 12th St., South Side; clubcafelive.com)

The Harris Theater is a historic Downtown cinema dedicated to showings of contemporary, foreign and classic films. The theater opened its doors more than a century ago, going through a number of rebrandings and renovations — including, ahem, some more adult incarnations — before becoming the city’s go-to home for fascinating independent and repertory cinema.
(809 Liberty Ave., Downtown; trustarts.org) 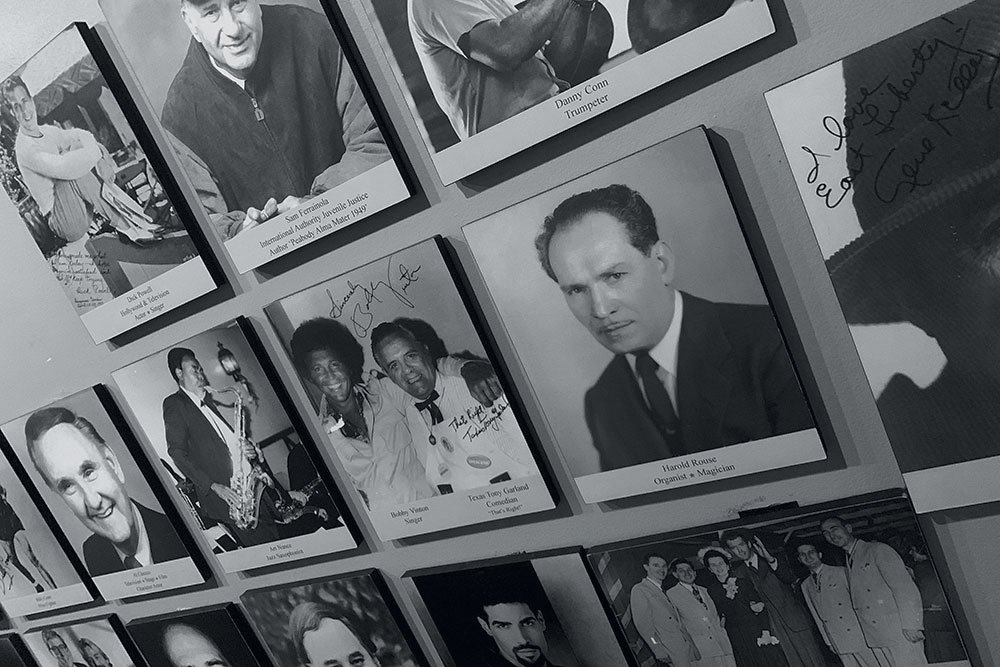 Liberty Magic is like no other venue in town: A full-time home for parlor magic. World-renowned magicians, mentalists and other practitioners of close-up illusions stay for weeks-long residencies at the intimate spot. Spring for the VIP experience and you’ll be ushered backstage after the show for an extra illusion or two.
(811 Liberty Ave., Downtown; trustarts.org)

MCG Jazz maintains Pittsburgh’s longstanding history of jazz artistry and innovation with a beloved series of concerts starring heavyweights from around the world. In addition to its considerable outreach and education efforts, the organization hosts a full season of music — including very in-demand holiday concerts.
(1815 Metropolitan St., Chateau; mcgjazz.org)

At Mr. Smalls Theater & Funhouse in Millvale, you’ll see national touring acts, favorite local bands and brand-new artists — all coming to play in a carefully converted former church. Downstairs, rock and hip-hop artists headline on the main stage; upstairs, you’ll stand feet away from the band in the rockin’ Funhouse space. A visit is a good opportunity to explore the neighborhood, too.
(400 Lincoln Ave., Millvale; mrsmalls.com)

The Oaks Theater still shows movies (often with an accompanying beer tasting), but there’s much more to be seen at this longstanding Oakmont cinema. Between stand-up comedy, touring bands, trivia and tribute acts, there’s likely to be something unexpected and entertaining happening at the Oaks, a historic venue tucked into an unassuming suburban enclave.
(310 Allegheny River Blvd., Oakmont; theoakstheater.com)

The Pavilion at Star Lake, an outdoor amphitheater with a seating capacity of more than 20,000, has hosted a who’s who of legends over its three-plus decades: David Bowie, the Grateful Dead, Tina Turner, Elton John, Janet Jackson and countless others have graced the stage. It’s a bit of a drive from Downtown (and leave some time to navigate parking), but if one of your favorites is playing, it’s a fine place to see them.
(665 Route 18, Burgettstown; livenation.com)

Pittsburgh Ballet Theatre frequently performs at Benedum Center as well as occasional shows around town — some in the open air. The 53-year-old theater has an eclectic history of performances, from new material to traditional shows, all brought to you by a world-class cast of professional dancers.
(pbt.org)

Pittsburgh Musical Theater has for more than 30 years been the local specialists in Broadway’s all-time hits. The troupe performs on their home turf, the Gargaro Theater in the West End, as well as at other venues throughout the city. The company is committed to youth development and education with a cast made up of professionals and young artists.
(pittsburghmusicals.com) 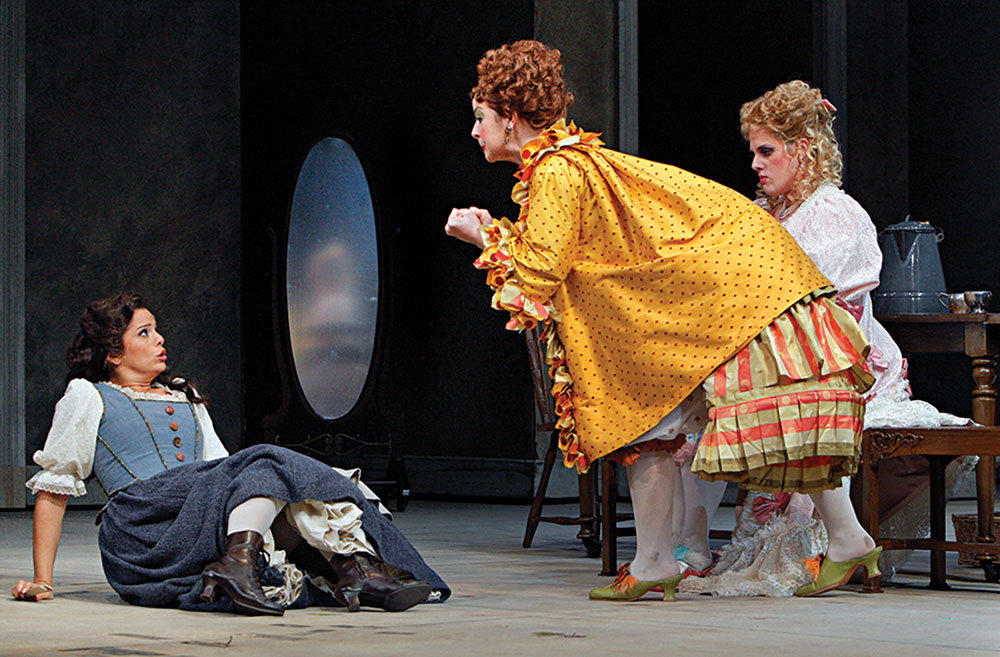 Pittsburgh Opera is the seventh oldest opera company in the United States and boasts a rich history of high-quality productions. On its schedule, you’ll find works by legendary composers, masterpieces by lesser-known composers and contemporary works by rising stars.
(pittsburghopera.org)

Pittsburgh Playwrights Theatre Company specializes in carrying on the legacy of Pittsburgh-born playwright August Wilson; it remains one of the few companies in the world that has produced all 10 of the Pulitzer Prize winner’s Century Cycle of plays. The group also performs new works by local playwrights, including as part of its annual Theatre Festival in Black & White.
(pghplaywrights.org) 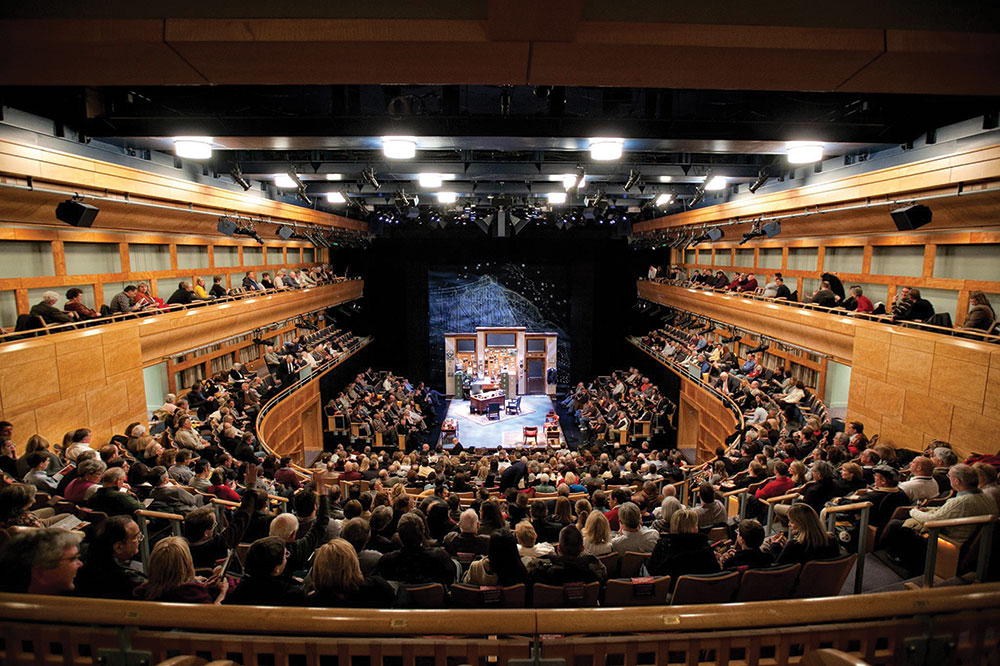 Pittsburgh Public Theater makes its home in the heart of the Cultural District at the inviting and versatile O’Reilly Theater. Expect a variety of productions, from Shakespeare and classics to cutting-edge new shows, performed by the best performers from Pittsburgh and beyond; upcoming productions include “A Raisin in the Sun,” “A Christmas Story” and “Steel Magnolias.”
(621 Penn Ave., Downtown; ppt.org)

Pittsburgh Symphony Orchestra performs in the Cultural District’s majestic Heinz Hall. Throughout its 120-plus years, the orchestra has toured Europe, Asia and the Americas with classical works from some of the greatest composers through the ages. Pittsburgh Symphony Orchestra hosts performances of masterpiece works and contemporary soundtracks in addition to local programs for youth education and community engagement.
(600 Penn Ave., Downtown; pittsburghsymphony.org)

Prime Stage Theater is an all-ages nonprofit organization that performs at New Hazlett Theater. The organization focuses on shows that connect children with literature, filling most of its calendar with shows adapted from books. It also has a variety of public performances that are accessible to those with mobility impairments as well as people who are Deaf and/or visually impaired.
(6 Allegheny Square East, North Side; primestage.com)

At Quantum Theatre, you never know where you might be headed; the itinerant group specializes in finding unconventional spaces for its performance, from temporary tents erected in city parks to shows performed in the shadow of towering local landmarks. The company also occasionally mounts immersive productions, centering the audience in the midst of the story.
(quantumtheatre.com) 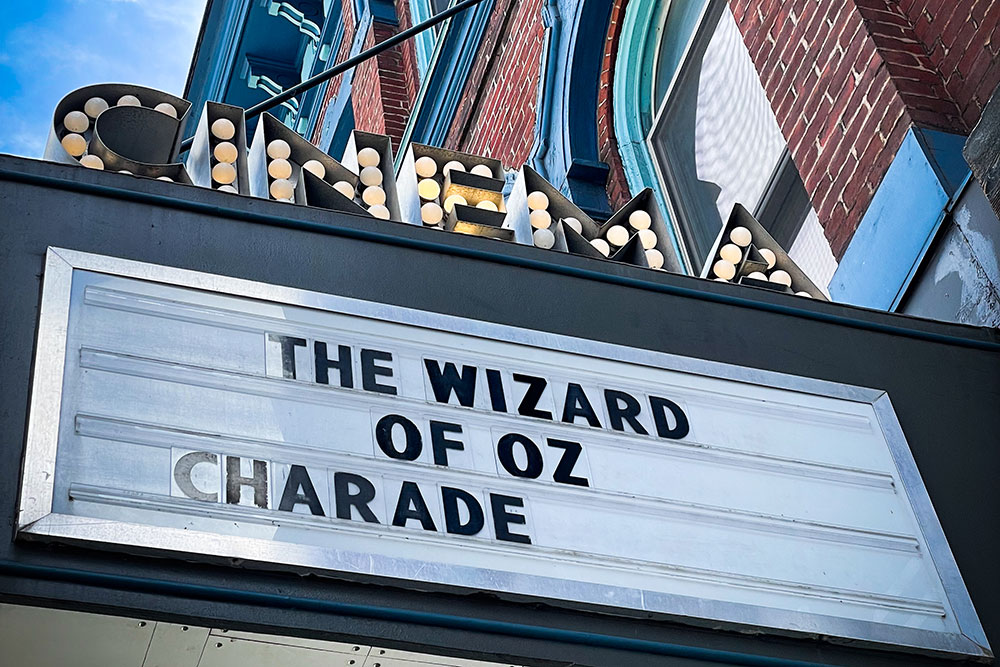 Visit Row House Cinema for a favorite film from the past — or something you’ve never seen before. Weekly themes, ranging from celebrations of genres and directors to off-the-wall concepts linking a series of films, bring back classics, rediscover lost gems and introduce flicks never before seen in Pittsburgh. Enjoy your film with a draft beer from the adjacent bottle shop and taproom Bierport.
(4115 Butler St., Lawrenceville; rowhousecinema.com)

Stage AE is a North Shore entertainment venue best known for indoor and outdoor concerts, with a full calendar moving to the open air when the weather warms. The venue brings musicians of all genres but has a focus on rock bands. Stage AE averages around 110 events per year, including the occasional sporting event, expo and charity fundraiser.
(400 North Shore Drive, North Shore; promowestlive.com)

Categories: From the Magazine, Visitors Guide