As fans of energy-efficient abodes, Zolina Cook and Jason Jevack pull together the right crew to create a distinctive prefab home with an eco-friendly twist on Pittsburgh’s North Side. 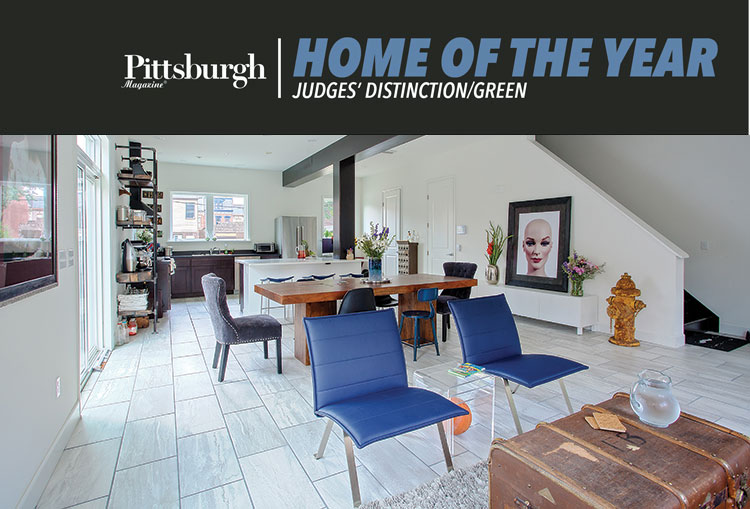 The homeowner customized all of the cabinetry and trim, carrying a theme of black, white and grey throughout the first-floor space. PHOTOS BY JEFF ZOET

When it comes to artwork, Zolina Cook enjoys portraiture.

The first floor of her home on the North Side features several pieces depicting faces. Occasionally, a new face in the window joins them, as passersby can’t resist peeking in the room’s tall windows. Cook can’t blame them. Everything about the modular home on Reddour Street is intriguing, from its angular exterior to its energy-efficient inner workings.

“It’s just a stunning house,” says Cook, a freelance financial consultant. “It’s just striking, and it fits the street so well. You notice the house, but it doesn’t look out of place.”

The home Cook has shared with husband Jason Jevack, a performance support manager for NiSource, daughter Ziola, 10, and son Zieben, 8, since last summer earned a Judges’ Distinction/Green Award from the panel of judges who selected Pittsburgh Magazine’s Homes of the Year 2016. 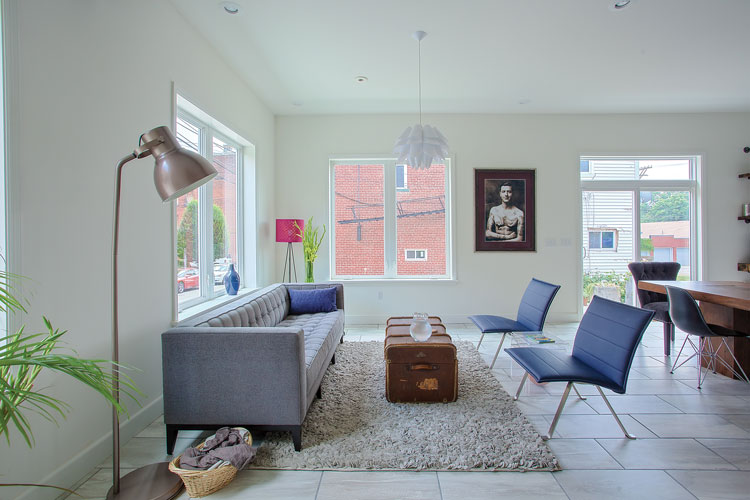 “It’s highly efficient with a functional plan and simple construction, yet it’s technologically advanced in terms of the approach to climate and energy,” says judge Jack

Alan Bialosky Jr., senior principal of Cleveland-based Bialosky + Partners Architects. “It feels spacious and airy in spite of the fact that it’s compact. It really takes the idea of modular construction and explodes it in a way that makes it very affordable and aesthetically pleasing.”

Cook and her family lived in the neighborhood for 12 years before buying the vacant lot on which they would place their new home. As fans of high-performance and modular building, they searched Google for a person who could deliver their ideal home, and the first result ended up being the right one: Elliot Fabri Jr. of South Fayette-based EcoCraft Homes, Inc.

“The beauty of pre-fab is you’re taking out the majority of the variables that you have in construction — weather and on-site conditions and things like that,” Fabri says.

“When you’re working in a factory and a quality-controlled environment, you end up with a much more consistent, higher-quality product.” 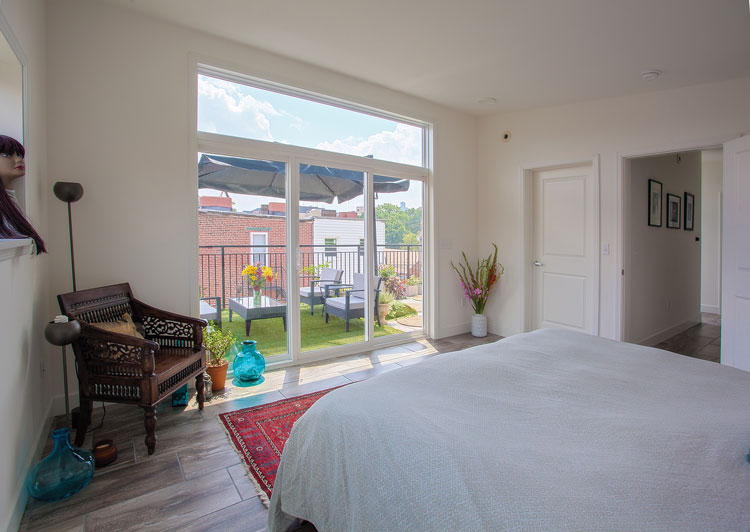 The master bedroom on the third floor opens to a 360-square-foot rooftop deck.

​Fabri worked with Mike Gwin, a principal with the Strip District-based architectural firm Rothschild Doyno Collaborative, to bring the modular design to an urban setting.
“The house was designed to be universal, and it fits a typical City of Pittsburgh lot well,” says Gwin. “It’s a designed idea but with a lot of open-ended flexibility.”

Construction took mere weeks, thanks to an offer from DIY Network’s “Breakneck Builds.” In order to appear on the show, the builders were required to construct the home in eight weeks — about half of the typical time. They met that goal, and the episode aired in late 2015. “It was a good challenge and certainly a lot of fun,” Fabri says. “We didn’t rush through anything. We just had a really coordinated effort to pull this whole thing together.”

Cook declined to provide a total cost for the home, but the price advertised on the EcoCraft website for such a project is $300,000. The home’s five modules sit atop a prefabricated concrete basement. Crews drove each one through narrow North Side alleys and stacked one atop another in front of an audience of captivated neighbors.

“It was like a barn-raising, this coordinated event with these big parts of the house going up in the air,” Gwin says. “I was one of the people standing there in awe, and other people were stopping on the street to find out what was going on.”

The home is highly insulated, with south-facing glass, high-efficiency windows and two energy-recovery ventilators that exchange stale exhaust with fresh air. IBACOS, a homebuilding innovation company in the Strip District, is studying the home’s air quality, energy usage and other features through small, strategically placed monitors in hopes of using the data to further advance HVAC systems for other energy-efficient homes.

​Aesthetically, the home is spacious yet inviting, with a first-floor open living space featuring 10-foot ceilings, 8-foot doors, tall windows and white walls. Cook customized all of the cabinetry and trim, carrying a theme of black, white and grey throughout, accented with industrial elements such as a baker’s rack Jevack constructed of metal rods and wood planks he salvaged from the family’s former home and elsewhere. 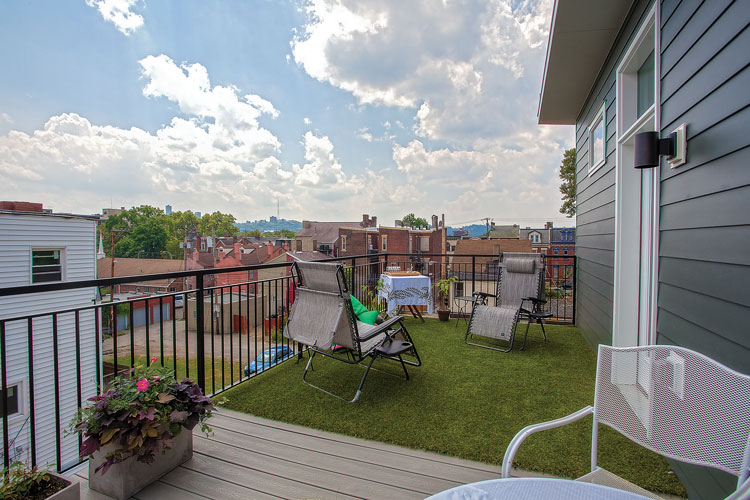 The second story is the kids’ domain, with two bedrooms, a full bathroom and their own lounge area. One floor up is the third-story master suite with cathedral ceilings reaching to 9-and-a-half feet. The bedroom opens to a 360-square-foot rooftop deck offering views of Downtown, Mount Washington, the North Side and beyond.
Cook plans to landscape the small yard space and plant a garden this spring.

“It flows,” she says of her family’s dream home. “Everyone moves throughout the house throughout the day. Nobody hibernates in any one section. We didn’t know that was going to happen, but we absolutely notice it in the family dynamic.”

This article appears in the March 2016 issue of Home & Garden.
Categories: Best of Design