The Schlotterbeck family creates a home in Richland Township with features that offer sweeping views of their surrounding 160 acres — and the land itself allows for opportunities they never imagined. 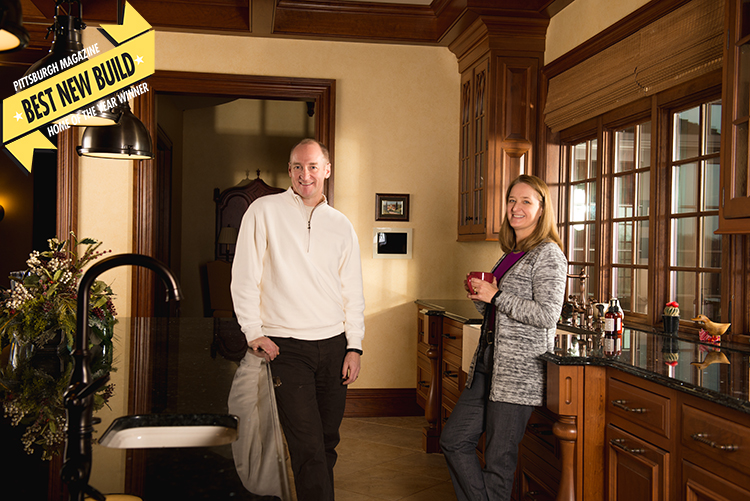 PHOTOS BY DAVID KELLY AND DENMARSH

When Brenda and Steve Schlotterbeck started to think about the prospect of moving, they believed a home on a 5-acre site would suffice. For around 12 years, they had been living in a 2,500-square-foot home in Pine Township, but the property had become too small for their family of five. “We were in a subdivision,” Steve says. “We were thinking we wanted more space.”

They looked at existing homes, wanting to avoid building from scratch after hearing horror stories from friends. They couldn’t find a home with the acreage they sought, however, and they wanted to remain in the same school district.

Then, their real estate agent informed them she had found a plot of land on which they might consider building. In an email, she noted its size: 160 acres. The couple thought it was a typo.

“I didn’t even think there was that much land [nearby],” Steve says.

They looked at the property and fell in love. They purchased it in 2010 and moved in late 2013.

Now, their 10,500-square-foot dream home overlooks acreage that has provided space for an outdoor kitchen, a koi pond, chickens and bees — with room for more. The home itself was built to appreciate the terrain, with large windows on five sides of the breakfast nook that bring the outdoors in, a turret with a view of rolling hills in the distance and a small observation area off of the third floor. 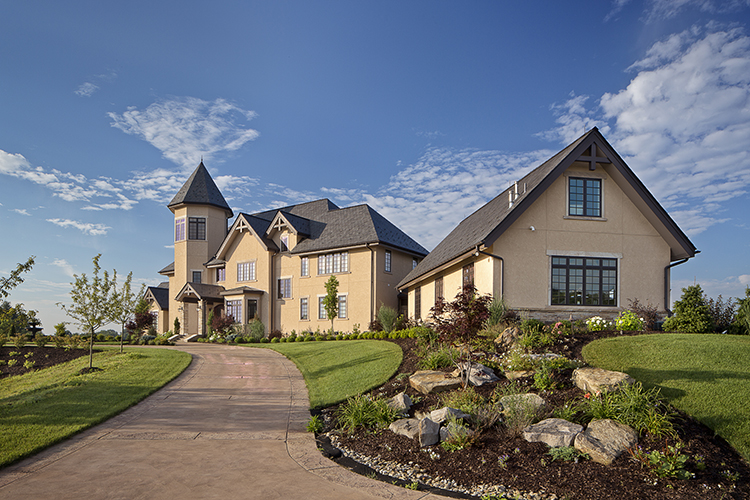 “We all really like the outdoors, which is why we were looking for a bit more space,” Steve says. “The way this sits up on the hill — it just has beautiful views, and we wanted a house that maximized our ability to see and interact with the land.”

After purchasing the property, the Schlotterbecks, both 49, hired Astorino, now Astorino/CannonDesign, to design and build a home there. After interviewing several architects, they say they believed John D. Francona, a former principal and senior vice president at the firm who now is retired, best understood their vision. They told him they wanted the home to fit into the landscape and have a distinctive design.

“We didn’t want it to look like a cookie-cutter home,” Brenda says.

​Astorino/CannonDesign designed and constructed the sandstone-colored stucco exterior, decorative crisscross wood beams nestled into the peaks of the black-and-gray Vermont slate roof, and copper gutters and downspouts — all natural-looking elements to tie in to the landscape. 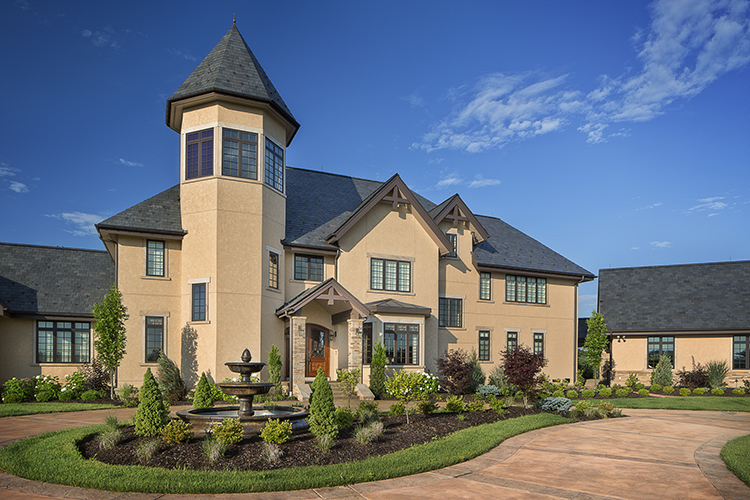 “It has a really nice, traditional look to it,” says Marc Del Rosso, director of preconstruction services at Astorino.

Mary Cerrone, a member of Pittsburgh Magazine’s Home of the Year panel of judges, admired the restrained feel of the front façade.

The Home of the Year judges also noted that the subtle, attractive details of the decorative beams on both the home and the three-car garage give the structures a cohesive look.
The focal point of the home’s façade is the turret. The spiral staircase inside spans four floors of the home and opens to a small sitting area at the top overlooking the property. 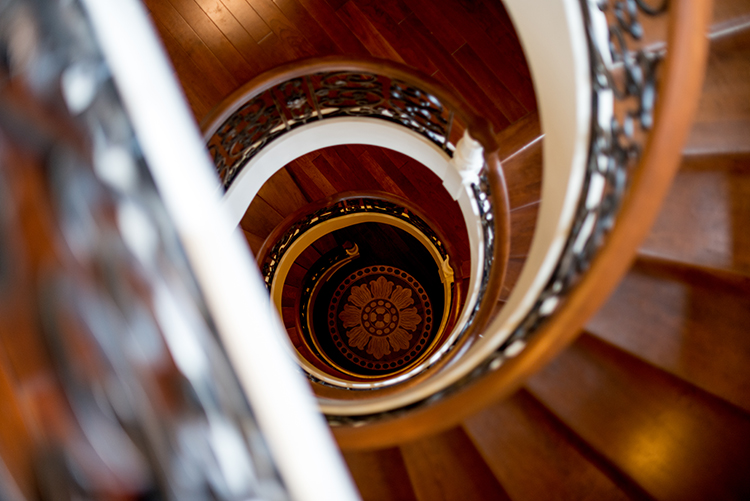 “We were thrilled,” he adds, noting that construction throughout the project was a smooth process. “They did a fantastic job.”

When the Schlotterbecks first met with Francona, they told him they wanted the laundry room, master bedroom and two offices — Steve is an executive vice president at EQT, and Brenda is a homemaker — on the main floor for convenience.

Francona suggested a ranch style, but the couple preferred a multi-story space similar to those in which they had grown up.

“I think we thought on the piece of land up on the hill, a ranch house really wouldn’t fit,” Steve says.

So the first floor was designed with a wing for the master bedroom suite, which includes his-and-hers walk-in closets and a master bathroom with heated floors, a soaking tub, a separate shower with two showerheads and integrated custom tile. 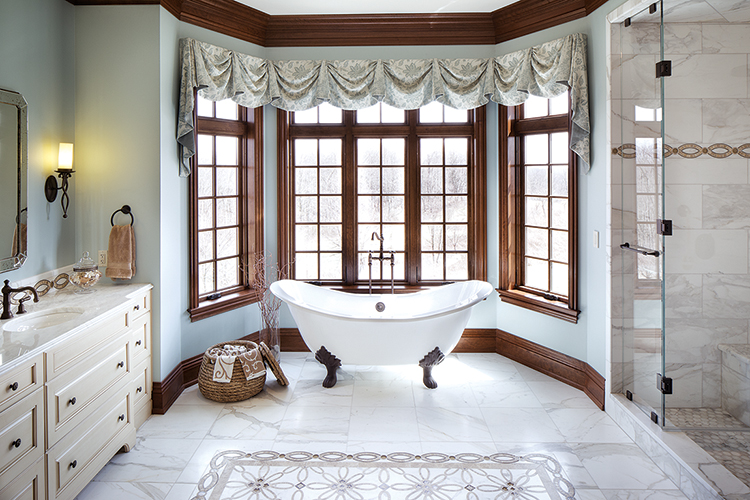 “I’ve done that sort of thing before, and it takes a lot of planning to get it right,” she says.

While Steve says the shower is one of his favorite features of the home, Brenda says she enjoys many of her closet’s hidden gems — a full-length mirror is concealed inside a vertical drawer to be pulled out when needed, and a small opening is designed for a stepstool that allows the couple to reach the top cubbies of storage.

Throughout the first floor, cherry-wood floors mesh with cherry doors, casing and trim to tie the space together. 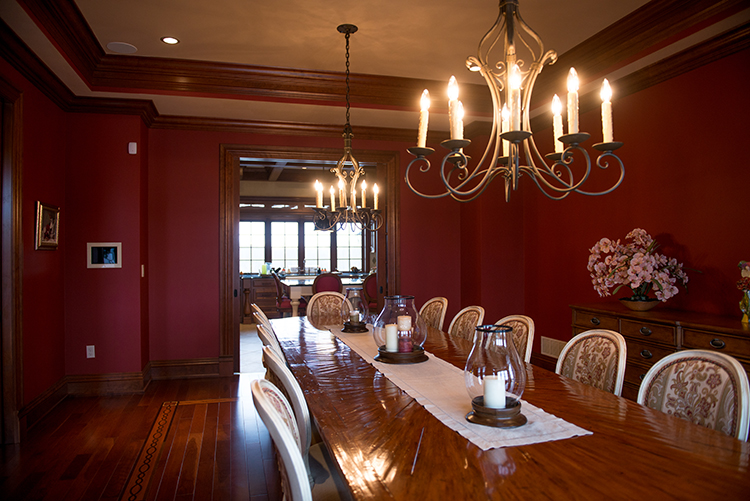 Brenda says she left most of the interior decorating to the staff at Astorino/CannonDesign; they discussed her tastes at length before composing the soft yellow, blue and red color scheme and accompanying furnishings.

The custom kitchen by Cuvee Kitchen Designs is one of Brenda’s favorite rooms. The centerpiece is a large island with granite countertops that contains a warming drawer as well as a refrigerated drawer to hold such basics as milk and water for easy access during cooking. 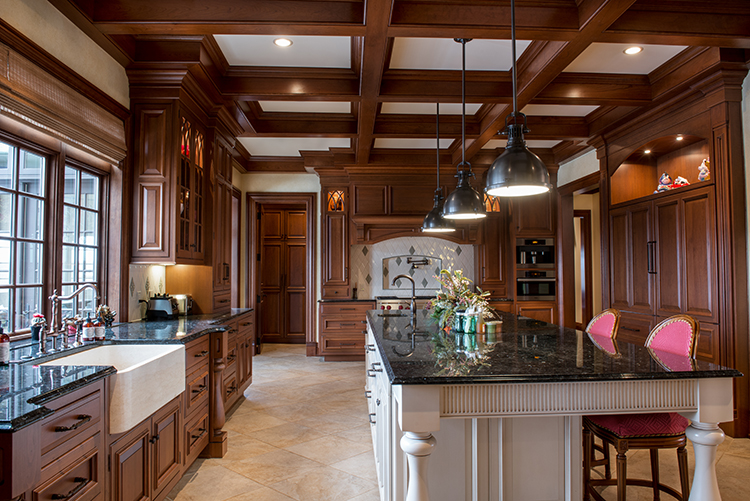 The kitchen, laundry room and pantry are located in the back of the home, where an entrance accesses a covered portico leading to the three-car garage. 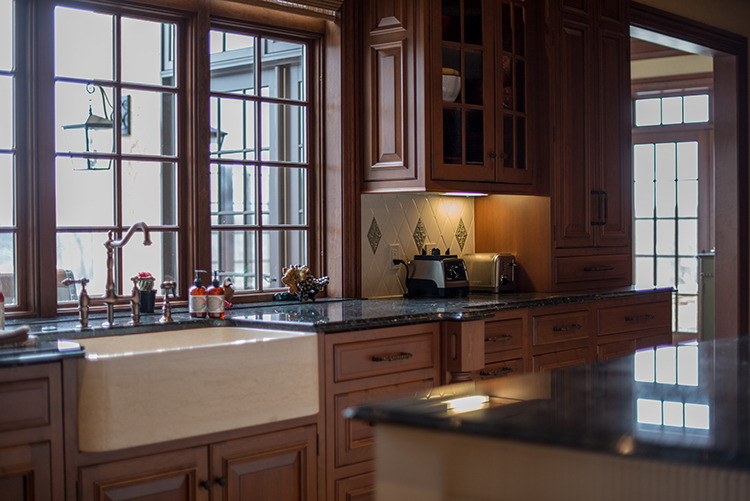 A small balcony/patio in the back of the house connects the breakfast nook to the great room, making easy pathways for social events — the couple held their youngest daughter’s graduation party at the home as well as a company outing for EQT.

The second floor contains three bedrooms with full bathrooms and walk-in closets as well as a children’s play area. The third floor includes a dormitory-style area with four single beds intended for guests — the Schlotterbecks’ three children now are away at college, but they enjoy entertaining and hosting family and friends for visits, especially on holidays.

The finished basement includes a fitness room, powder room, small library — Brenda loves to read and says she asked for the cozy alternative to a proposed game room — a bar area with two high-top tables and a family room with access to a rear patio. A home theater also is planned.

The Schlotterbecks declined to disclose the project’s cost. 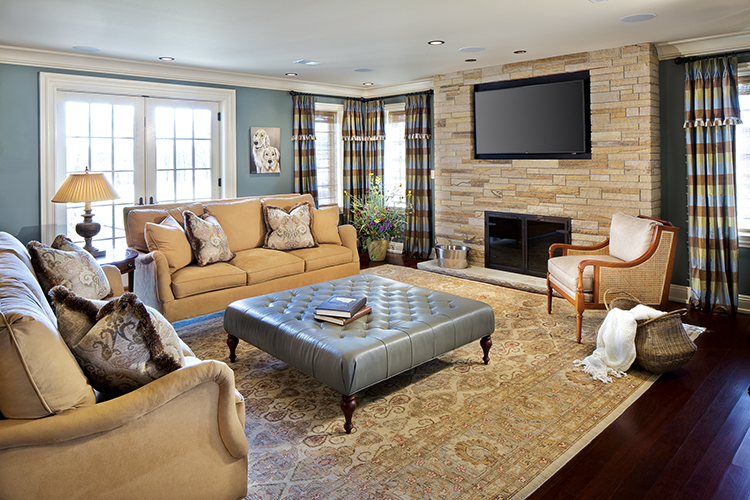 Despite the family’s affinity for outdoor sports and recreation, Steve says they didn’t foresee all they’ve been able to do on the property.

They now keep bees and chickens for fresh honey and eggs; they also put in a large garden. They grew a 450-pound pumpkin, and Steve dreams of cultivating one that reaches 1,000 pounds.

Steve is in the process of placing outdoor food posts for deer that share the space with turkeys and coyotes. The family’s plans also may include reconstructing an old barn on the property and using it for storage, events or perhaps even housing alpacas or goats. 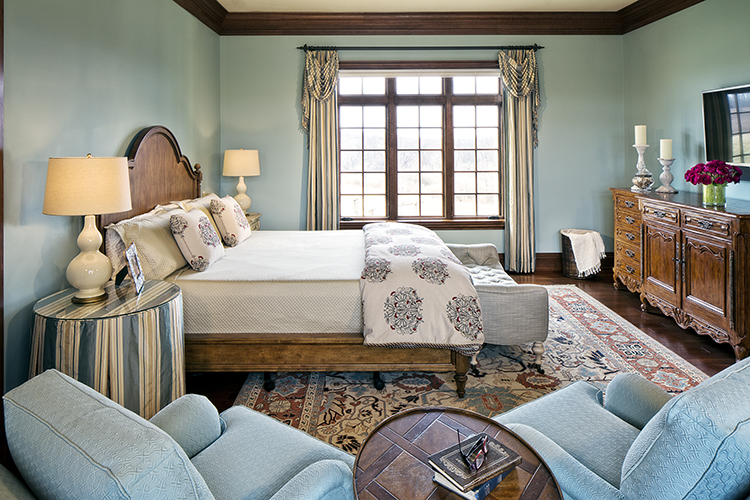 “Honestly, we hadn’t really thought we’d have bees and chickens and grow giant pumpkins,” Steve says. “But once we saw this piece of land, it was pretty clear this is what we wanted to do.”

The couple also installed an outdoor kitchen with a pizza oven, an icemaker, a beverage fridge, two televisions and an Arcadia Louvered Roof. The roof slats open and close to allow more or less light or keep out bad weather. The roof is connected to a full custom-automation system by Kozi Media Design, which controls the temperature, lights, sound and stereo system and even window blinds throughout the home.

A partially heated driveway and entry walkway eliminate the need to shovel snow in winter.

Steve says he enjoys working the land, and he set out last year to cut all of the grass himself. He hired a landscaper, though, after spending eight hours each week tending to the entire property.

“It’s so pretty in the spring and summer,” he says.
Early in his career, Steve says job opportunities caused the family to move every few years. Now, he and Brenda are happy to stay put.

“Hopefully, someday one of our kids will take it over when we move on, but we intend this to be our final home,” he says. “Brenda and I will retire here and enjoy the land.
“This is our dream home on a property we love, and we can’t really imagine having anything we like better.”

This article appears in the March 2015 issue of Home & Garden.
Categories: Best of Design