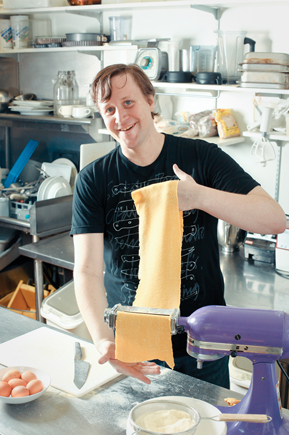 After high school, Stephen Felder’s friends landed jobs at a restaurant. So, naturally, he got one, too, just so he could hang out with them. Little did he know that it would be the beginning of a love affair with cooking.

Fast-forward to today: Chef Felder, now 32, is the executive chef and co-founder of Stagioni, a rustic Italian restaurant that serves “honest, clean and fresh” fare.  Raised in North Carolina, Felder moved to South Florida, where he met his sweetheart (and Stagioni’s co-owner) Cara DelSignore, a businesswoman and restaurant manager.

The two wanted to move to a more affordable city and eventually chose to relocate to DelSignore’s hometown, Pittsburgh. Felder couldn’t have been more pleased: “I instantly fell in love with Pittsburgh; it’s filled with good, honest people and great farms.”  Nearby farms are very important because he creates his menu daily, based on available products, and strives to use ingredients that are high-quality, local and seasonal (especially since the restaurant’s name means “seasons” in Italian).

When Stagioni opened in Bloomfield in 2009, it received immediate praise for the quality of its food — particularly the housemade pastas and gnocchi — but it was stymied by a small space and tiny kitchen. This year, Felder and his team took a leap of faith by moving to South Side, now occupying Le Pommier’s former space on Carson Street. The spot was renovated and is about twice the size of the old Stagioni, but it maintains an intimate family feeling.

Felder credits DelSignore for bringing the perfect ethos to the restaurant. “Cara is amazing with people,” he says. “She is very genuine and treats them like they are coming into her own home.”

With the new space (and larger staff), Felder believes that the Stagioni team can “spread [their] wings.”  “We now have a cellar, so we can devote time to canning, pickling and preserving,” he says. “This will allow us to play with the seasonality of the food — for example, we can bring out some stone fruits in the middle of winter.” Felder’s thrilled about acquiring a liquor license, and he’s working closely with wine importers to find varieties that are interesting but affordable (typically Italian — or at least with Italian character).  Felder’s passion and commitment to quality make him a chef to keep on your radar.