Legume has been reborn in Oakland, and chef Trevett Hooper is still as fearless as ever. 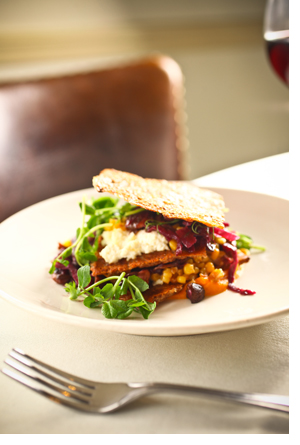 Legume isn’t exactly new — it’s like a modest but attractive caterpillar that morphed into a colorful monarch butterfly.  To give you a sense of scale: Legume’s old Regent Square kitchen could just about fit into its new dishwashing area. Except for the name and the philosophy (and that killer chocolate truffle cake), Legume is all-new in a much larger Oakland space (the former Moré), with a separate full bar, sommelier, expanded staff and easy parking.

The response to the new Legume has been overwhelming, as tables are particularly hard to come by. Why, though? “We try to be fearless about putting out the best possible food and service we can provide,” says executive chef/co-owner Trevett Hooper. “We don’t want our restaurant to be driven by money — we want a democratic price point with a range for food and wine because healthy, real food belongs to everyone.”  And sure enough, every age group is represented at Legume — from the professional student to the seasoned senior.

The food tastes great because Hooper focuses on top-notch products — and prepares them well.  His team, including chef de cuisine Jamilka Borges, tries to incorporate the highest amount of local and organic food in every dish; for this reason, the menu is small but changes daily to reflect available ingredients (and is posted on their website by 5 p.m.). Because of its focus on grains and vegetables, Legume does a particularly masterful job with its vegetarian offerings.

Hooper believes that the restaurant scene in Pittsburgh has changed in a significant way: “It used to be that restaurants here copied restaurants from somewhere else — but now, chefs are creating Pittsburgh food that celebrates western Pennsylvania resources.”

The expansion of Legume is also a Pittsburgh story. “This restaurant should’ve never worked on paper,” says Hooper. “We didn’t use any banks; we had hand-shakes and help and generosity and hard work from so many people who made an investment in the new Legume.”  We, the diners, are truly the beneficiaries of these investments and look forward to many more meals at Legume.