Jump in your car and follow our guide to some of our region's best roadside attractions. From the Big Mac Museum to the kid-friendly stealth bomber, these unique places are sure to charm. 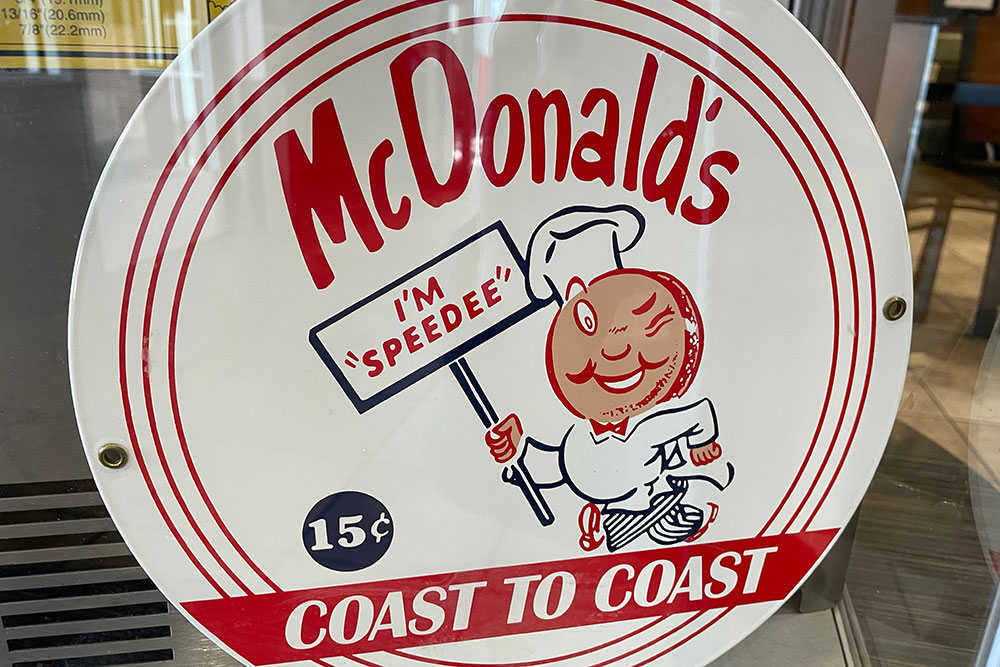 Americans love roadside attractions and oddities, the kitschy and the campy. Most date back to the mid-20th century when folks thought nothing of jumping in the Ford Fairlane and heading cross-country. Long drives meant overnight stays, and popular routes offered a bit of quick sightseeing. We mapped a rough circle of southwest Pennsylvania and found these artifacts of Americana. 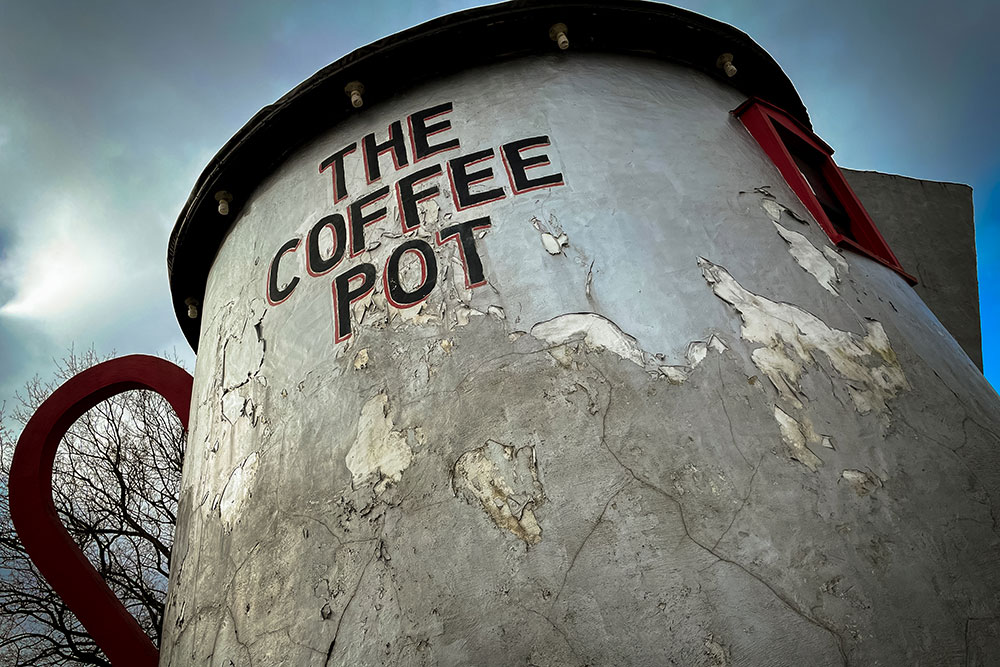 As Clark Gable once said, “I never laugh until I’ve had my coffee.” If a venti just isn’t big enough for you, pull over in Bedford and stare up at 18 feet of silver goodness in the shape of a giant coffee pot. Built in 1927 as a diversion near the famous Lincoln Highway, it was originally a lunch spot and later a bar. Time took its toll and the pot fell into disrepair, but it was moved across the street and restored in 2004. It’s now a part-time gift shop where you can buy mugs, magnets and T-shirts. 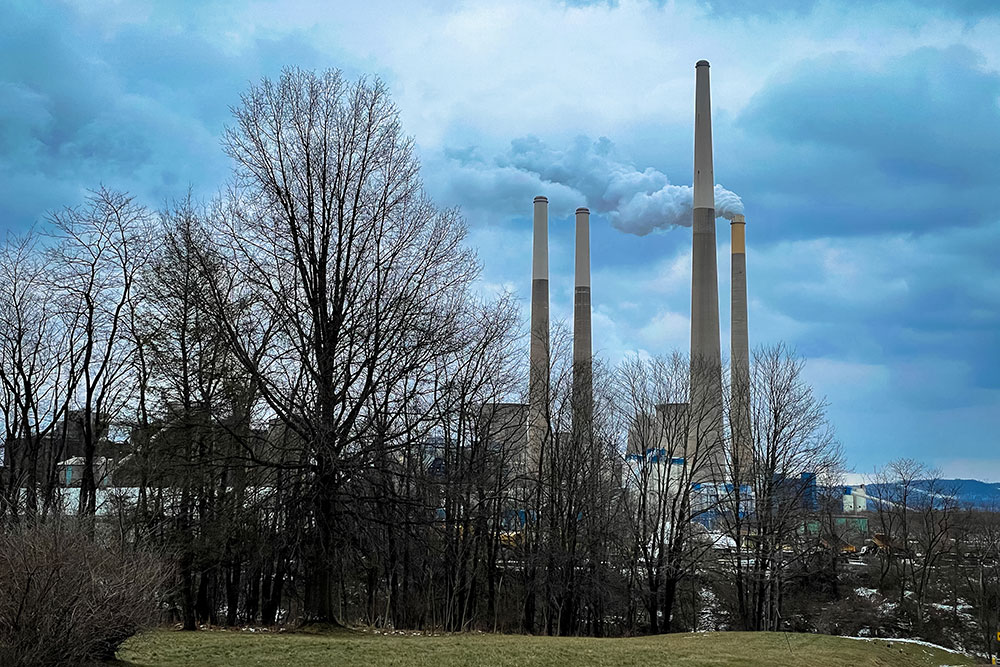 At 1,217 feet tall, the “4th Chimney” at the Homer City Generating Station is the tallest smokestack in America, and the third tallest in the world (behind chimneys in Ontario and Russia). That’s the height of the U.S. Steel Building — plus the Federated Tower and three Sidney Crosbys. The station generates electricity by burning coal, and city regulations require that burnt coal effluent be released high enough to allow for dissipation. It’s tall enough to see
from a distance. 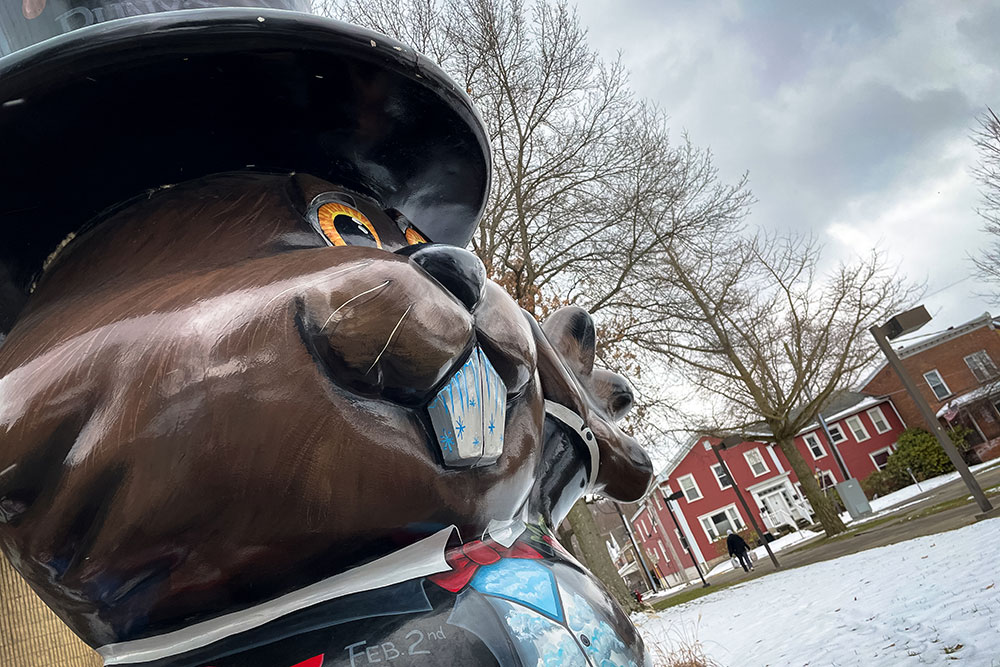 Everyone’s favorite weather-savvy groundhog works his magic one day a year in Punxsutawney, when he’s roused from his warm terrarium home (“Phil’s Burrow”) at the Memorial Library and primped for his close-up on national television. (The geek-friendly EarthSky site only gives Phil a 39% success rate since 1887, but who’s counting?) He saw his shadow on Feb. 2, 2021, so we’ll see if his prediction of six more weeks of winter is correct. Punxsutawney has more than 20 giant Phil sculptures to visit. 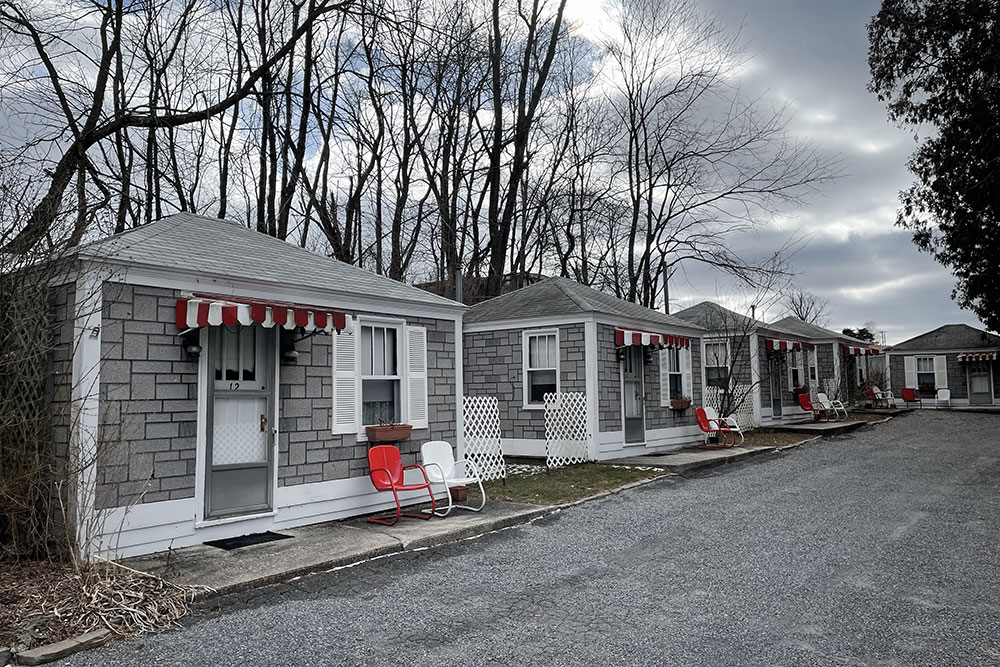 While you’re motoring along the Lincoln Highway, spend a night or three at the Lincoln Motor Court. Built in 1944, the 12 cottages are a great way to step back in time and travel as our grandparents did. Don’t expect spacious suites — the bedroom is barely big enough for the bed, and the bathroom holds two toothbrushes, max. But the original paneling, vintage fixtures and period decor make for a pleasant night of midcentury dreams. Ask for a S’mores kit to enjoy by the fire ring. 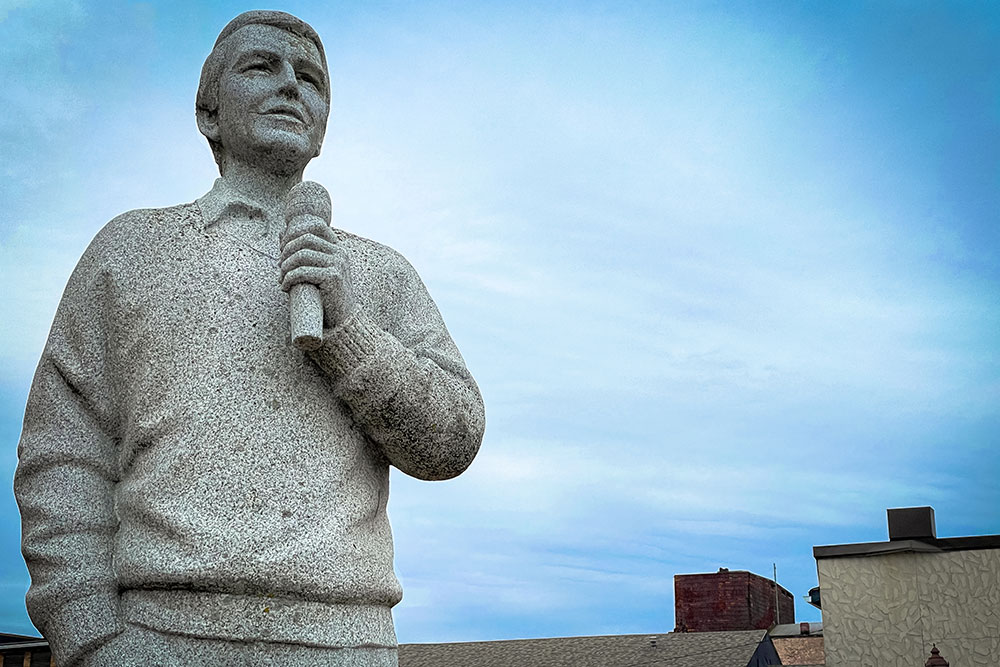 Canonsburg’s hometown son Perry Como was born May 18, 1912, and recorded exclusively for RCA Victor for 44 years. He received five Emmys, a Grammy Lifetime Achievement Award, and has three stars on the Hollywood Walk of Fame … but perhaps his lifesize statue in Canonsburg is his greatest honor of all. It was erected in 1999, two years before his death.

Canonsburg Town Center
Get There > 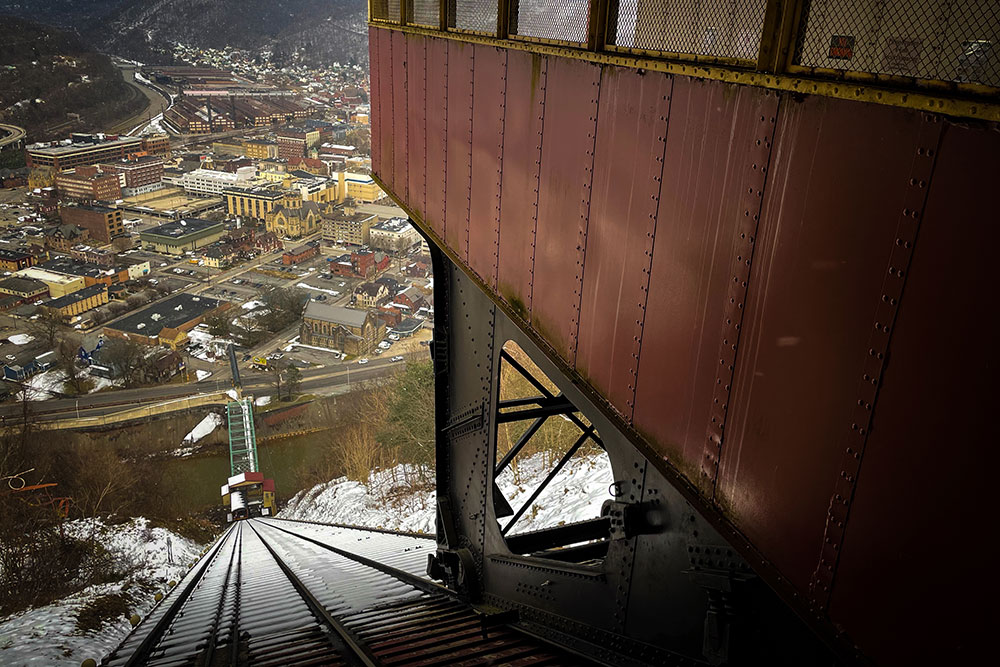 Pittsburgh is lucky enough to have two inclines, but the Johnstown Inclined Plane is the world’s steepest vehicular inclined plane. Completed in 1891, it connects the city of Johnstown with the borough of Westmont on Yoder Hill. At 896.5 feet long with a slope of 71.9%, the incline boasts cars big enough to hold 65 people, six motorcycles, or an automobile. Hungarian engineer Samuel Diescher was also the mind behind our very own Duquesne and Fort Pitt inclines. The Johnstown Incline is on the U.S. National Register of Historic Places. 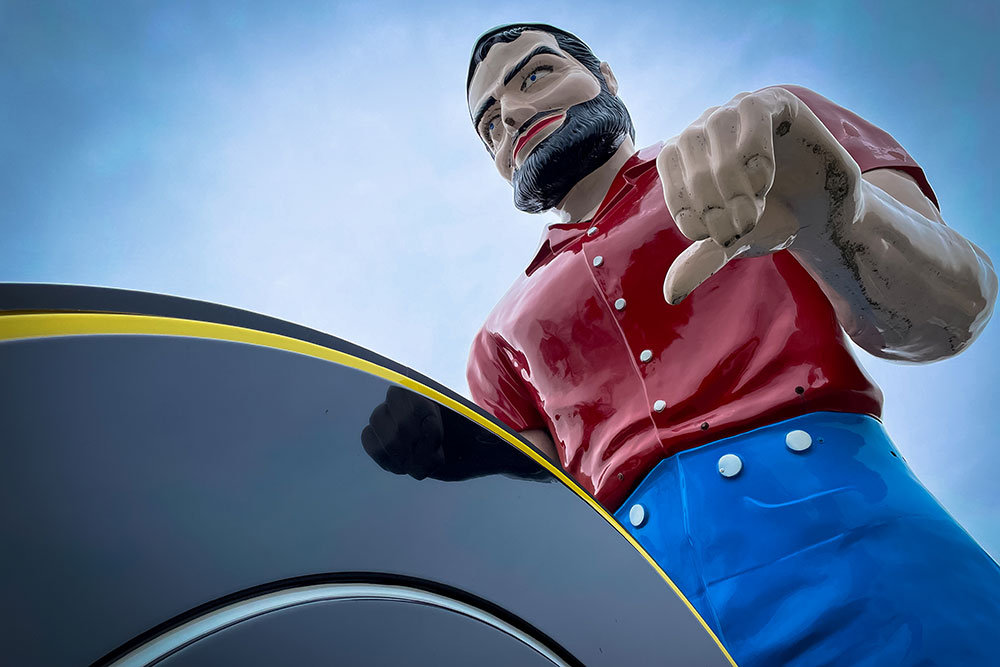 Standing guard over Import Export Tire in Uniontown is Paul Bunyan, also known to locals as Muffler Man. At 20 feet, 6 inches tall and 820 pounds, with size 48DD shoes, he’s a big dude. He was constructed in California and first oversaw business at the Fayette Tire Shop before moving to Uniontown. After a much-needed facelift in 2007, he looks better than ever.

350 Pittsburgh St., Uniontown
Get There > 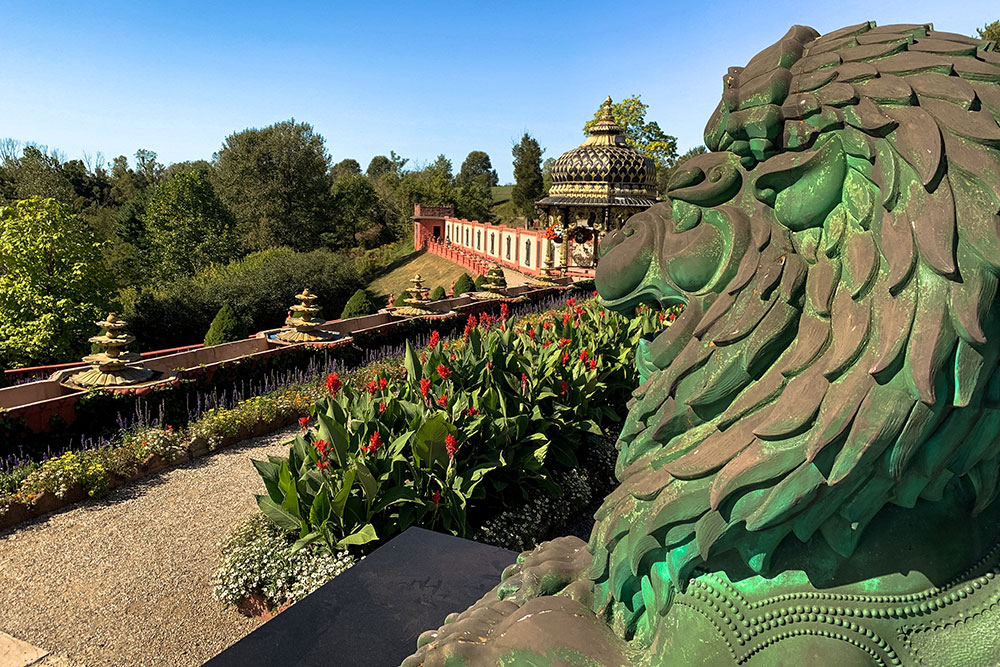 Founded in 1968, this beautiful compound welcomes visitors to experience a day in the life of a Hare Krishna devotee. Start at the Palace of Gold and learn the history of how the Prabhupada’s Palace came to be built in the Appalachian hills. Schedule your visit to include a temple service, and walk to the lotus pond to see the giant elephant, swan and dancer sculptures, and admire the resident peacocks. Always be respectful; remember this is a place of worship. 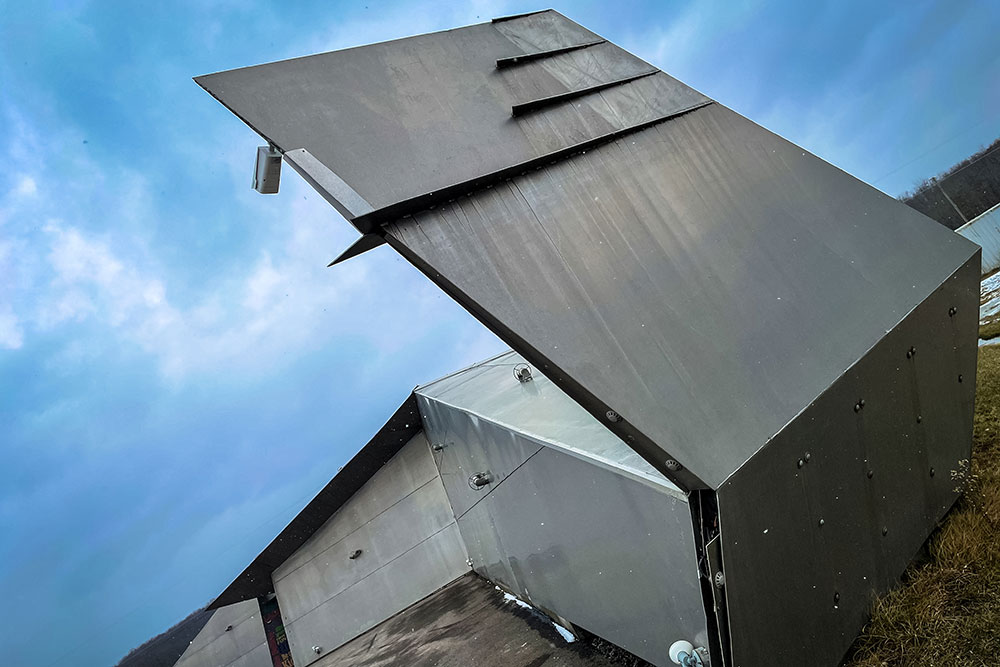 See that stealth bomber that’s so unstealthily situated on Route 8 in Butler? It’s home to Playthings Etc., housed inside a replica of a silver stealth bomber. Billed as “the world’s coolest toy store,” you’ll find everything from classic puzzles, T-ball sets and pogo sticks to science kits, role-playing games and robots. 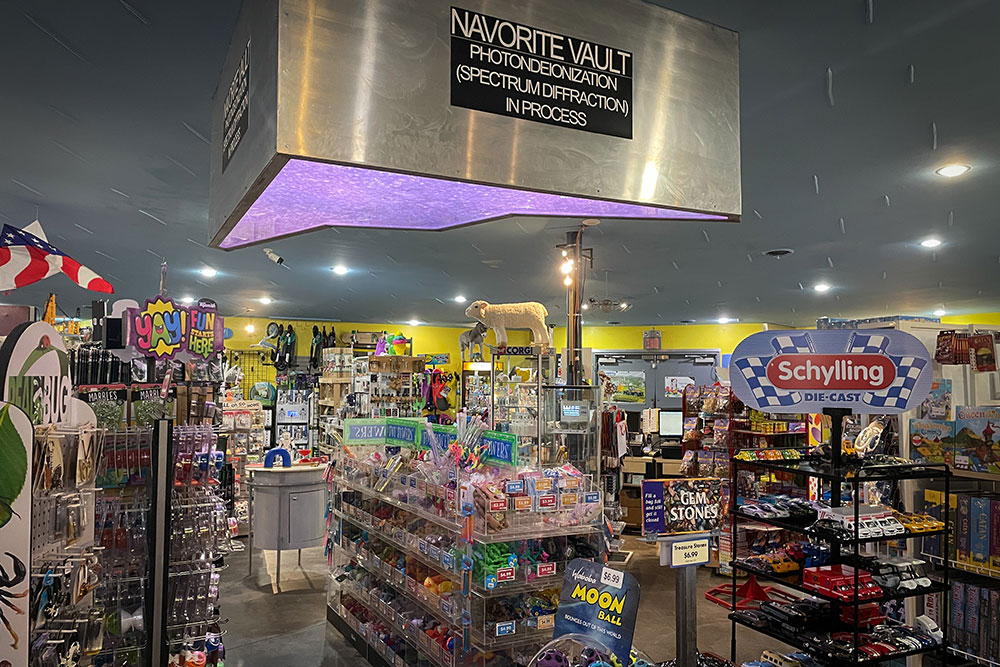 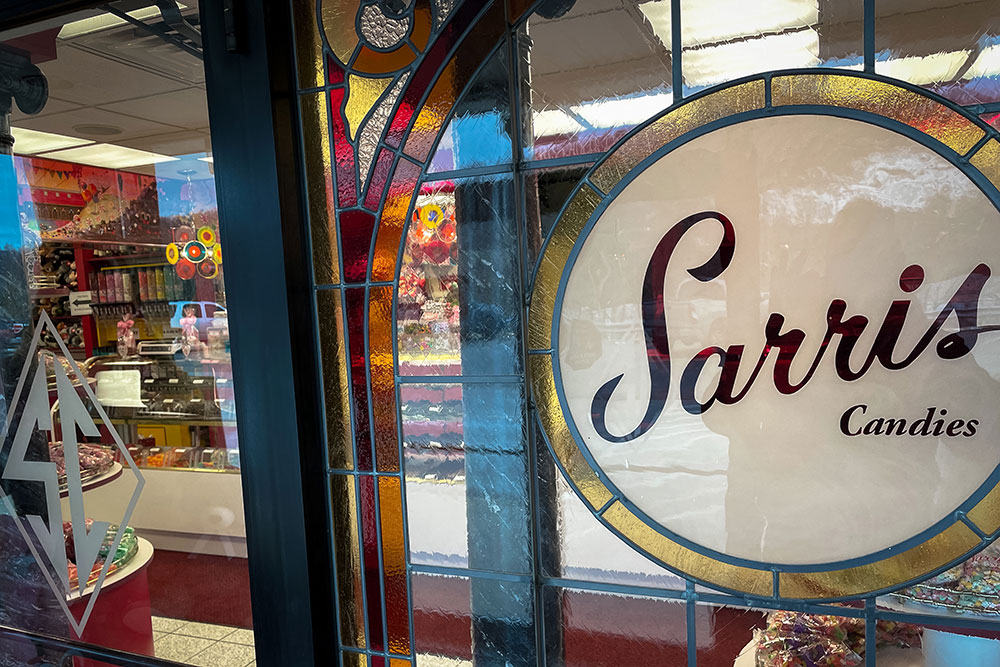 Frank Sarris began producing chocolates in his Canonsburg basement for friends and family (and his fiancée and future wife Athena). The business outgrew the basement and moved to a small candy shop; from that point, there was nowhere to go but up. Family members still carry on the traditions he started (he passed away in 2010) at the Sarris Chocolate Factory and Ice Cream Parlour, a Canonsburg landmark the size of a city block. Don’t miss the 1,500-pound, handmade chocolate castle in the chocolate fantasyland. 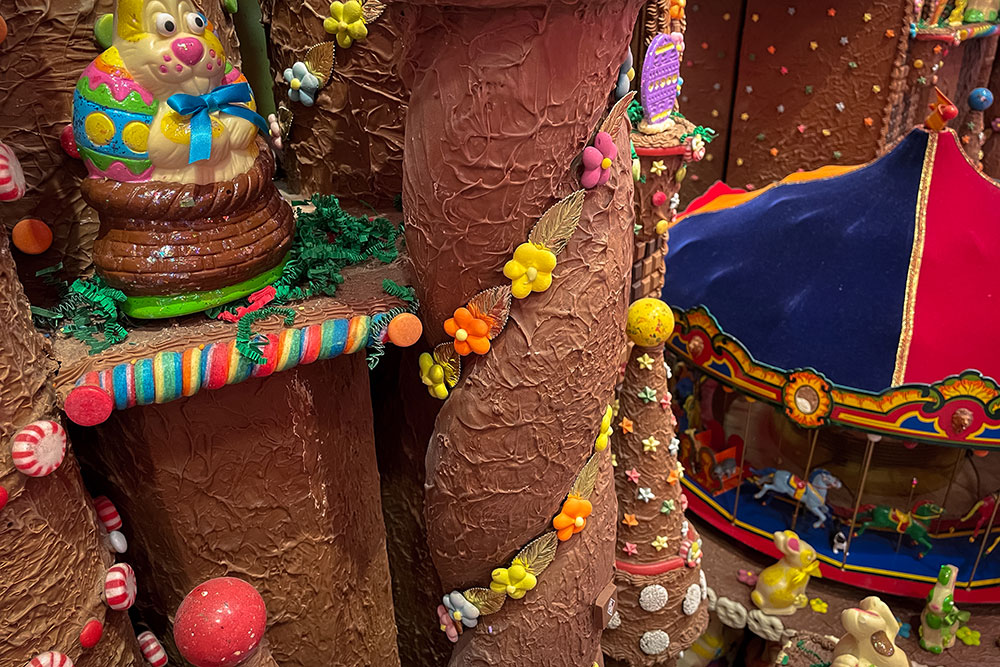 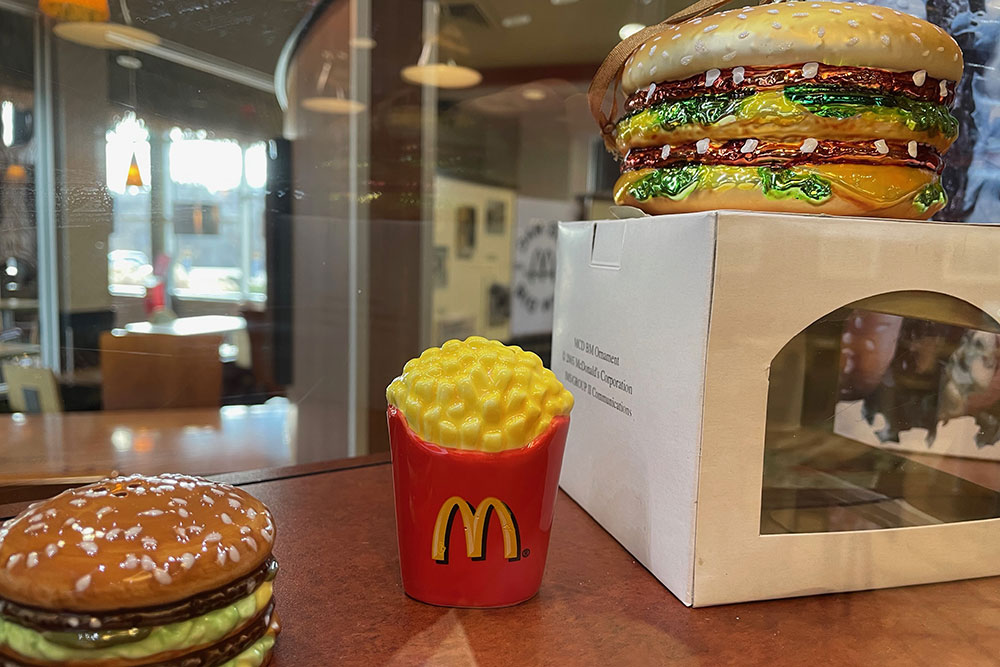 Now that’s a big Big Mac. Stacked 14 feet high, the giant burger at the Big Mac Museum in North Huntingdon has all the ingredients (two all-beef patties, special sauce, lettuce, cheese, pickles, onion, sesame-seed bun) we insist on, although its location in a McDonald’s Playplace isn’t ideal for photos. The Big Mac was actually born 40 miles south in Uniontown, but the North Huntingdon spot gets more traffic. Franchisee Michael Delligatti introduced the Big Mac in 1967, and the family still owns close to 20 restaurants, including this one. Other items of interest include an original special-sauce dispenser and vintage wrappers and toys.

This article appears in the March 2021 issue of Pittsburgh Magazine.
Categories: From the Magazine, Hot Reads, Things To Do, Visitors Guide