Science has confirmed that football killed Junior Seau. Now what? 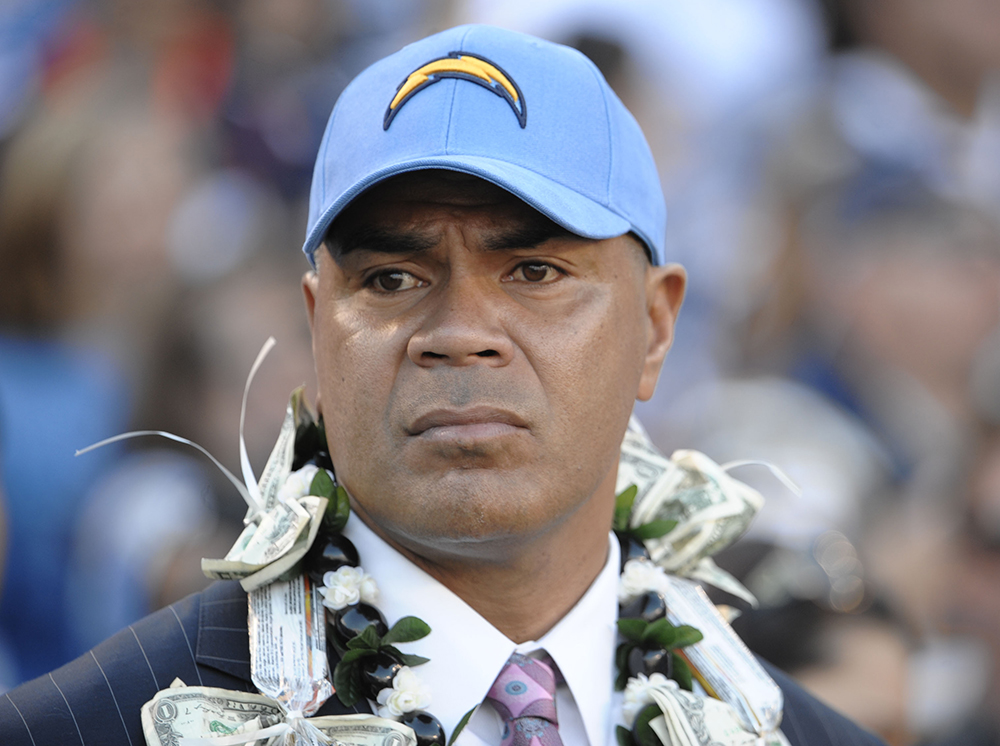 Of all the sad, delusional and willfully vacuous things a professional athlete has ever said to me, this is the quote that will forever be stuck in my brain:

“I’m hoping that if I eat my blueberries every day and do my memory exercises, I’ll be okay.”

I had been interviewing NFL Hall of Famer, Immaculate Receptor and eventual Penn State Truther Franco Harris for this magazine. Somehow, the conversation wandered to the brain trauma epidemic that has turned so many of Harris’ peers into shambling ghosts and corpses. Harris sincerely believed that his brain could be saved from the slow creep of brown tau proteins and the accompanying derangement of his psyche by a daily regimen of antioxidants and Boggle.

He admitted that he was scared by the suicides of Dave Duerson, Andre Waters and others. “We’re all scared,” he said. Instead of religion, Harris had turned to superfoods for protection.

Last week, the inevitable was finally confirmed. NFL legend Junior Seau was indeed suffering from chronic traumatic encephalopathy (CTE) when, seemingly apropo of nothing, he scribbled the lyrics to a sad-sack country song on a yellow legal pad, removed the SIM card from his cell phone, sat on the edge of a bed in the guestroom of his mansion and shot himself in the chest with a revolver.

Unlike other CTE victims, Seau did not appear to be careening into oblivion before his death. He wasn’t sleeping in a bus garage like Mike Webster. He wasn’t turned into an empty husk from senility like John Mackey. He wasn’t binging on prescription pills like Derek Boogaard. Immediately after his retirement in 2009, Seau was being groomed by ESPN to be the next in a long line of cheesing jock-0 chuckleheads — those absurdly windsored analysts wearing David Byrne dadcoats who cut studio wrestling promos about “What It Means to Be a Man in This League” and other self-help vagaries. Seau was so revered that when he drove his SUV off a cliff in 2010, everyone accepted his explanation that he’d accidentally dozed off at the wheel.

For decades, the NFL has survived on the dogma that the Reaper was never coming for pious company men like Seau. Even after 26-year-old Chris Henry’s brain was found to be as rusted with degenerative brain disease as an 80-year-old Alzheimer’s victim, the league office’s never-ending army of Mr. Smiths had the audacity to wag their power-thumb and hem-and-haw about “lifestyle factors” and “emerging science.”

Webster was a vicious drunk and a lout for the sake of it, you see, not because he was dealing with the ever-tightening vice grip of neurological erosion enabled by coaches and trainers telling him, for decades, to rub some gat-damn dirt on it. And Henry? Who can possibly say how his cornrows affected cranial impact? More study was required and all that.

Nevermind that researchers from Boston University and other labs were running around with their hair on fire, telling anyone who would listen that they’d begun finding CTE in athletes as young as 16, who were not exposed to lifestyle factors like alcohol and steroid abuse, which the NFL used to smear Webster and others. The NFL kept talking about the “unknowns.” All the while, Seau withered away quietly.

As late as 2008, after the sample size of CTE-ravaged brains had grown to more than 50, the NFL dispatched a cavalcade of skeptical neurologists, many of whom sat on NFL safety boards, to filibuster the narrative to death.

Finally, the NFL sent noted CTE skeptic Dr. Peter Davies, a neurologist at Albert Einstein College of Medicine and an international expert on Alzheimer’s disease, to meet the team at the Brain Injury Research Institute and examine their research. The league expected Davies to criticize the emerging science with the typical milquetoast denialism. Instead, he became a full convert.

“It was beyond anything I had ever seen, and I have seen some wild things,” Davies told me of his experience viewing the brains. “Some of these individuals have a disease that goes way beyond anything that's reasonable. As an experienced person looking at these brains, the only thing you can say is, 'Wow. What is this?'”

Davies’ very public conversion combined with an admittedly hypocritical public outcry finally moved the NFL to DO SOMETHING© about PLAYER SAFETY© which they take VERY SERIOUSLY™. Seriously enough to commision a national advertising campaign winking at the quaint notion that players used to wear leather helmets (which happen to be just as effective at protecting the brain from the rotational forces of a collision as their $200 contemporary counterparts) and giving $30 million to the National Institutes of Health to study brain trauma, which was not given benevolently by the owners but was fought for by the NFLPA during the 2011 lockout.

And yet despite all this seriousness, and despite a recent study by Boston University, the most comprehensive ever, revealing that CTE was present in the brains of 34 of 35 former NFL players, NFL commissioner Roger Goodell channeled his Wayne LaPierre spirit animal and said this less than 48 hours after it was confirmed that Seau’s brain went dark, too: “[We] need to have a lot more research because there’s still unfortunately a lot of unknowns.”

At this point in the conversation, let’s address the inevitable:

“This is a man’s game,” says a grown-ass fella who gets genuinely upset when his friends leave “floaters” of Miller Lite at the Bar-N-Grille. “Next they’ll put a DRESS on der quarterback!”

And maybe these ambassadors from the underbelly have a point. Maybe we could save ourselves a lot of grief and money if the NFL’s moral conundrum was simply summed up as: It’s really bad to hit your head all the time!

Because really, what’s the league to do? Making killshots the issue and vilifying easy targets like James Harrison and Ed Reed isn’t a sustainable defense. And, anyway, it doesn’t address the problem, which is more endemic and less dramatic: in Boston University’s new study, linemen made up 40 percent of the confirmed CTE cases. The science is increasingly pointing to the conclusion that it’s not the human car wrecks that are the problem, but the fender benders inherent to the game.

Football is the problem. And we love football. More than 35 million of us tuned in for the Broncos-Ravens playoff thriller. So maybe Seau’s death is really the high-water mark—that place where the wave finally broke and rolled back on the Concussion Era? Maybe we should all just retreat from this moral turpitude and turn our gaze once more to the warm, yellow glow of the nacho dip rabbithole? Maybe there’s a certain kind of honor in neurological seppuku?

Then there’s the obfuscation. There’s the too-familiar politicized gall of an outsized corporation disguising itself as an American institution.

NFL players receive a paltry four years of post-career health care support from their $9-billion-a-year-snarfing employer and are consigned to the healthcare marketplace, loudly red-flagged by what are some very well-known pre-existing conditions. The NFL giddily and quite easily ransoms billions in corporate welfare from taxpayers, so perhaps it’s no surprise that the answer to this is a hearty “free market, free will, something-something.”

The NFL wants to make this living holocaust political. Because if it’s political, if there are commercials and press releases and Very Serious Debate and unanimous agreements to convene another hearing sometime soon (at which Hungarian glacial water would be appreciated), then the fourth wall still stands. Fans will order a bucket of wingdings and re-submerge in the hot sock-stink of the Sunday deprivation tank and tune out the real-time mushing of human brains. It will always be there, if not ever be quite present.

So long as the Reaper only comes for the bad guys, the endless supply of auto-spawning nimrods, the reckless booze hounds and scripper job creators who don’t remember to eat their handful of blueberries before they go to bed, the NFL is safe. But Seau took his vitamins and said his prayers. The former Walter Payton Man of the Year was the league’s poster boy for responsible self-immolation. And still, he sat in a spare room, surrounded by no one, and put a gun to his heart.

So, now what? The NFL’s process for diagnosing concussions on the sidelines is an outdated mess, the league does not require players to wear the best available helmets. And sometimes, coaches and players still publicly disagree over whether or not head trauma even occurred. Instead of scientific legerdemain and weepy TV commercials, the NFL can honor Seau’s ghost by starting there.