For $100 per week, post your message and get the word out via the message board at Waffle Shop in East Liberty.

Photo courtesy of the Waffle Shop

Don’t be fooled by their similar names. The Waffle Shop is not the same as the Waffle House.

The Waffle House is where you go to eat waffles and only eat waffles. Maybe have some coffee. Some bacon. But you’re eating, paying and going home. No one wants to hear anything from you other than your order and maybe a "LOOK AT THE GIANT TIP I JUST LEFT YOU."

Pittsburgh’s Waffle Shop is a restaurant in East Liberty where you can go to eat waffles and leave a giant tip but also to voice your opinion on various matters on the live-streaming talk show produced in the restaurant.

Whereas the "About Us" section of Waffle House’s website probably says something like, "We make waffles for you to eat," but the "About" section of Waffle Shop’s website states, "The shop is a public lab that brings together people from all walks of life to engage in dialogue, experimentation and the co-production of culture."

That’s incredibly cutting-edge—and for lack of a better word, cool. For a person who is paid to find better words, I bet my pay will be docked this month.

What I find to be the most intriguing right now is Waffle Shop’s custom-built rooftop billboard, a 36-foot billboard that has been used as an art installation and as a place for Waffle Shop to let passerby and patrons alike know what they need for the restaurant—like a leafy plant, which  eventually was donated! 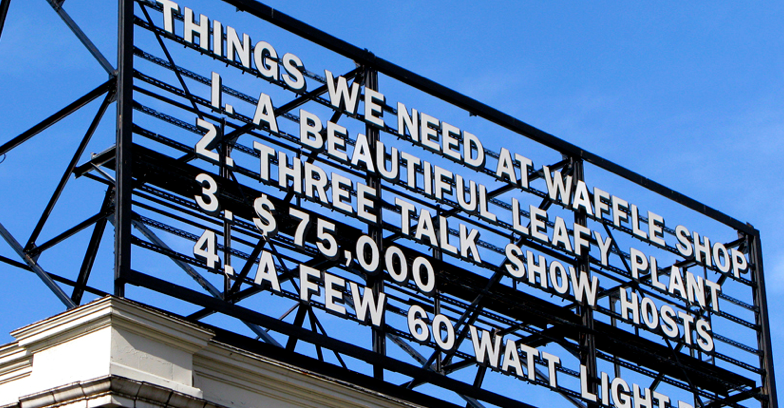 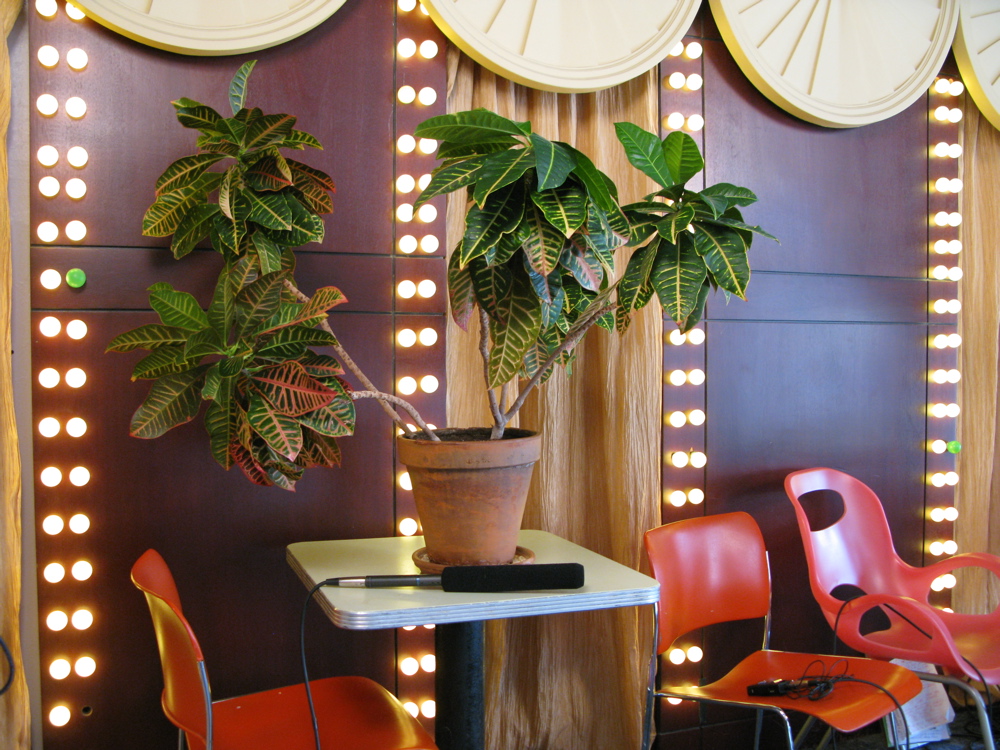 … and you shall receive.

Now, Waffle Shop is allowing you to pay $100 per week (originally $200!) to post a message on its billboard, an affordable way to get your message out.

Within reason, there are many possibilities!

Wish your mother a happy birthday.

Put, "Dear Johnny: Happy 8th Birthday! From: Superman" up there, and then drive your kid past it until he notices.

Encourage peace and understanding and love.

Encourage the use of turn signals.

Advertise your podcast or blog.

Ask Sidney Crosby if he’s ever coming back.

Send a message to Bob Nutting. A non-profane message, mind you. There are limits, after all.

Send a message to the pigeons. But then they’ll probably just poop on it.

Send a message to Mayor Ravenstahl. Something like, "Dear Luke. A pothole ate my car. That’s not cool. Love, Virginia." (That’s just a name I pulled out of thin air.)

Be creative. Make it worth your $200, which will support what Waffle Shop and neighboring Conflict Kitchen are trying to do.

Give everyone a voice. And delicious waffles.

(Those interested can send a billboard idea that’s roughly 125 characters long to billboard@waffleshop.org)

This article appears in the March 2011 issue of PittGirl.
Categories: PittGirl