Your Guide to Summer Movie Season ’14

Don't just go see a movie. Go see a movie then do something thematically related and cool afterward. 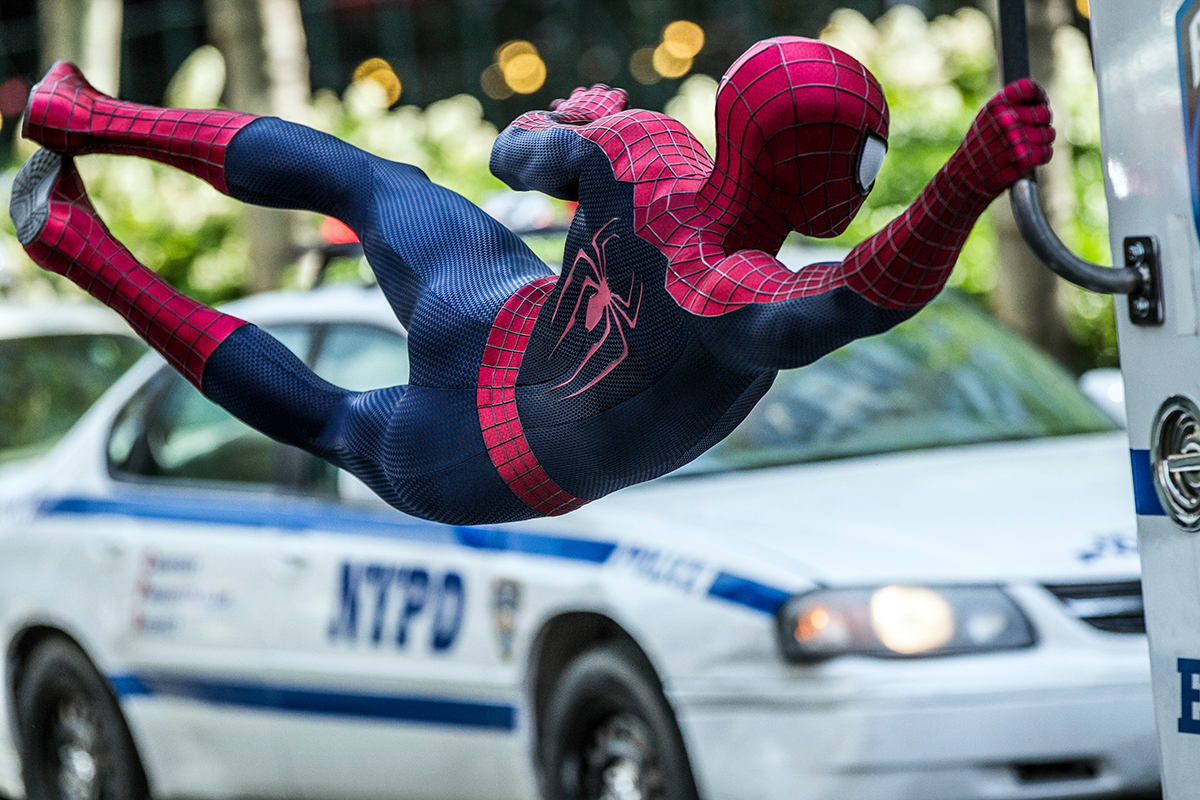 Want to find the best and worst of what Hollywood has in store for the summer of 2014? Check out “The Amazing Spider-Man 2.”

It also has long stretches of humdrum, formulaic nonsense, an overreliance on 3-D, head-scratching direction (enough with the shaky cameras already) and about 40 unnecessary minutes.

Such is the push and pull of mainstream summer flicks here in the ’10s: There’s a lot to love and a lot to complain about — within the same movie. There are few outright duds and few classics as risk-averse studios attempt to please everybody in the audience (while wowing no one).

Here’s your now-to-Labor Day rundown of the biggest, loudest and flashiest flicks en route. For a tally of quality flicks, look elsewhere; this week is all about the bombastic blockbusters we associate with the warmer months. I’m also omitting family fare; you’re going to those flicks or you’re not, depending on how many small people live in your house. (And don’t worry, we will once again be profiling classic hits making a big-screen appearance this summer in a few weeks.)

To pad your evening, we’ve added a Pittsburgh-focused suggestion for extending your moviegoing experience. And if you think this list is packed, just wait ’til 2015, with new installments of “Avengers,” “Terminator,” “Jurassic Park,” “The Hunger Games,” James Bond, Jason Bourne and “Star Wars.” Among others.

No film is willing to open opposite the webslinger, so Spider-Man’s battle with the nefarious Electro runs unopposed this weekend. After the Movie: If you’re not filled up on soda and popcorn, try some Spidey-esque acrobatics of your own at the Sky Zone Indoor Trampoline Park in Leetsdale.

Seth Rogen and Rose Byrne move into a perfect suburban home — but are dismayed when a frat house, led by Zac Efron, turns up next door. Could be funny. Emphasis on could. After the Movie: Fill up a growler at your nearest Sharp Edge location and invite your own neighbors onto the porch, for a reminder that real life is significantly less wacky.

You know, the big lizard. More of him. This reboot features Bryan Cranston and Elizabeth Olsen among an ensemble cast. After the Movie: A pleasant stroll through the Pittsburgh Zoo, to remind yourself that real reptiles are fairly manageable.

Jon Hamm stars in the true story of two Indian (the country) youths recruited in a bid to find that nation’s first pro baseball players — who eventually signed with the Pirates! After the Movie: A ballgame at PNC Park, naturally. Just, uh, don’t expect to see the subjects of the movie, Rinku Singh and Dinesh Patel; they never made the majors and are no longer with the organization. (Spoiler?)

“X-Men: Days of Future Past”

Yup, there only are two weeks between Marvel properties in May, as Hugh Jackman, Jennifer Lawrence and the rest of the mutants assemble again. After the Movie: If you’re converted, take a trip to New Dimension Comics to keep the X-Train rolling. See the flick at Pittsburgh Mills and there’s a New Dimension under the same roof.

Disney’s live-action flick about the “Snow White” villain stars Angelina Jolie. We’re trying to avoid thinking of last summer’s disastrous “Lone Ranger,” another non-animated Disney flick, because this one actually looks OK. After the Movie: Drinks at Meat and Potatoes? We’re thinking something with apple.

“A Million Ways to Die in the West”

After “Ted” became a blockbuster, “Family Guy” creator Seth MacFarlane could pretty much take his pick of projects. He went with this genuinely amusing-looking Old West farce. After the Movie: Do we have any Western-themed bars left? Somebody let me know. If not, just drink whiskey near a horse.

Another year, another dull-as-dishwater lookin’ Tom Cruise space epic. After the Movie: Sign up for a community service project as penance for buying a ticket to this movie. (Which I admittedly haven’t seen yet, but come on.)

“The Fault in Our Stars”

Filmed in Pittsburgh and based on the beloved novel by John Green, Shailene Woodley stars as cancer-stricken teen Hazel. Expect a near-“Twilight” level of frenzy (but a much better film). After the Movie: I haven’t read the book, but according to those who have, you’ll need comfort food. To Station Street!

The remake starring Channing Tatum and Jonah Hill was a surprising delight. Can a sequel repeat the magic? The trailer looks funny, but that’s the easy part; let’s hope it’s more than just college jokes. After the Movie: You know what, scratch that. Before the Movie: South Side bar crawl. It can only help.

The hit Broadway musical is adapted for the big screen by Clint Eastwood, with a mostly unknown cast. After the Movie: Find a karaoke bar, obviously.

The sequel to the Kevin Hart comedy transports the action to Vegas. After the Movie: If you’re the type energized by scenes of Sin City mayhem, pop on over to Rivers Casino to roll the dice.

Really? Why? For who? Seriously, who buys these tickets? They always make like $400 million, and they’re always terrible. Like, all-out terrible. Who are you people? After the Movie: Re-evaluate. Everything.

Melissa McCarthy stars in this road-movie comedy directed by her husband, Ben Falcone. The film also features Susan Sarandon and Dan Aykroyd. After the Movie: If you’re like me, every road movie — no matter how disastrous things go for the characters — makes me want to drive. Head up to North Country Brewing for a big dinner.

“Dawn of the Planet of the Apes”

Who would’ve thought that the “Apes” franchise reboot would become one of the most cinematically viable? Andy Serkis and Judy Greer, via motion-capture, are your chief apes. After the Movie: When I picture a hyper-intelligent ape out for a night on the town, he’s got an umbrella drink in hand. Tiki Lounge.

Andy and Lana Wachowski, creators of “The Matrix,” get back to the business of sci-fi epics. Mila Kunis and Channing Tatum star. After the Movie: If it’s like the better flicks by the Wachowskis, there will be plenty to break down. Head somewhere with a beer garden (Round Corner Cantina?) and analyze over a few pitchers.

The second flick concerning the hero this year stars The Rock, under the guidance of notoriously hit-or-miss director Brett Ratner. After the Movie: You’ll need an antidote — something soothing and intellectual. Grab a latte and bring a good novel to Biddle's Escape.

“Guardians of the Galaxy”

The fourth Marvel property (and second entry in the official “Avengers” canon) this summer stars Chris Pratt and Zoe Saldana, among others. After the Movie: Let’s switch it up and send you to Phantom of the Attic this time. Get someone to explain to you what exactly you just saw.

Since I was born in 1985, I have no ability to be impartial on anything Ninja Turtle-related. This is a live-action version, with Megan Fox as April O’Neil. After the Movie: Consult with the fine folks at Oddball Pets about the logistics of adopting a turtle of your own. Name him Michelangelo. (Not Leonardo.)

These action flicks live and breathe on bloated cast lists, so here you go: Sylvester Stallone, Jet Li, Antonio Banderas, Jason Statham, Wesley Snipes, Dolph Lundgren, Mel Gibson, Harrison Ford, Arnold Schwarzenegger, Randy Couture, etc. After the Movie: I wanted to recommend skydiving, but there are liability concerns. So head to Kennywood and buy a ride on the SkyCoaster.

Based on the Newbery-winning 1993 children’s novel by Lois Lowry, this weighty sci-fi drama features Meryl Streep and Alexander Skarsgard. After the Movie: Hug your children and/or dogs.

“Sin City: A Dame to Kill For”

A sequel to the 2005 hit comic book adaptation was rumored as early as 2006; after eight years of delays, the finished product offers a surprisingly loaded cast including holdovers from the original (Mickey Rourke, Jessica Alba, Clive Owen) and interesting newcomers (Joseph Gordon-Levitt, Eva Green). After the Movie: Sit at a bar alone, narrating events to yourself until you’re asked to leave.