Your Guide to St. Patrick's Day

It’s a day so nice that Pittsburgh celebrates it twice. Whether you are gearing up for the revelry of the St. Patrick’s Day parade this Saturday, or waiting for the “official” celebration of Naomh Pádraig on March 17, here are seven things you need to know about our favorite Irish national holiday:

1. You should go to the parade
And not just to party either. The real fun is outside the bar along the parade route. Each year, as many as 250,000 spectators flock to downtown Pittsburgh to watch the parade—which features more than 200 marching units, including bagpipers, Irish dancers, Irish setters, floats, and even local celebrities. According to parade officials, Pittsburgh boasts the second-largest St. Patrick’s Day parade in the country behind only New York City. Eat it, Boston. 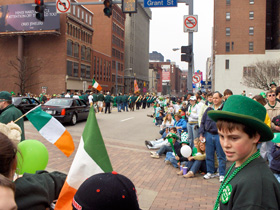 2. Just don’t show up to the wrong party
The parade starts early at 10 a.m. on Saturday, March 13. But also be sure to remember that the parade route has changed this year. Instead of starting at Mellon Arena as it traditional has, the parade will kick off at the Greyhound Bus Station on Liberty Avenue and 11th Street, and concludes at Commonwealth Place. Just watch out when the Conboy Clan comes marching by. I heard those guys shoot green silly string into the crowd.

3. You can support a good cause, too
The Hibernian Hunger Project and the Pittsburgh St. Patrick’s Day Parade Committee are asking all parade goers to bring non-perishable food items for the Greater Pittsburgh Community Food Bank. There will be collection sites at Mellon Arena, the Mayor Caliguiri statue at the City-County Building, and by the reviewing stand at the Steelworkers’ Building.

4. Making green beer is easy
Unfortunately, the traditional outdoor party in Market Square has been shut down this year due to ongoing construction (nothing says “liability” like beer and bulldozers in close proximity). While restaurants in Market Square will still be open for beer specials, making do-it-yourself green beer is actually quite easy. All you need is a few drops of green or blue food coloring and a light beer (or a yellow soda like Mountain Dew).

Click here to view a how-to gallery on DIYlife.com.

5. Irish eyes will be smiling
Each year, one lucky Pittsburgh woman is honored with the crown of Miss Smiling Irish Eyes. This year’s queen is Meghan Schiller, a junior at Carnegie Mellon University double majoring in Fine Arts Vocal Performance and English. Aside from her many academic achievements at CMU, Megan has worked with the Pittsburgh School for the Blind to raise funds for “Service for Sight,” an organization that provides aid to the blind and visually impaired. You’ll see her waving from atop a 45-foot float featuring a giant rainbow, hundreds of shimmering shamrocks, and—you guessed it—a giant pot of gold. No word yet if Mayor Ravenstahl has plans to use the gold to reduce the city’s deficit after the parade. 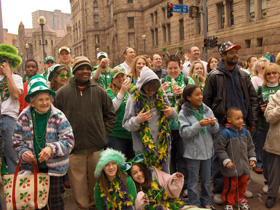 6. We’re a very green city
Sure, hosting the 2010 World Environment Day is nice and all, but this city has been green long before the environmental accolades started rolling in. Did you know that nearly 15% of Pittsburgh residents have Irish roots? And on St. Patrick’s Day, another 75% claim to be Irish.

7. Actually, everyone is Irish
It doesn’t matter if your name is Callahan or Calabretta. On St. Patrick’s Day, everyone is Irish, and the throngs of street vendors will supply you with plenty of green camouflage—from leprechaun hats to shillelaghs to shamrock sunglasses. It’s practically a mini-Mardi Gras.

Sláinte! (To your health, mate!)

p.s. In the southern and western parts of Ireland, you’d pronounce that "slawnt-yeh" or "slant-yeh." In the north it’s "slain-cheh." 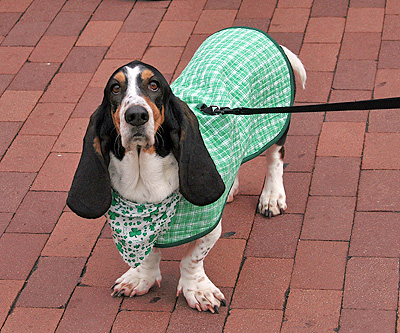 If we’re talking about St. Patrick’s Day, forgive me for making a stern point right off the bat: St. Patrick’s Day is March 17. It is not “whatever day the parade happens.” You’re free to enjoy the Pittsburgh St. Patrick’s Day Parade, by all means. (FYI: It’s Sat., March 13, beginning at 10 a.m., downtown. Info: pittsburghirish.org/ parade.) But please, for the love of St. Patrick (a real person, mind you), celebrate on the proper day as well. This is Pittsburgh—since when are we afraid to drink on a Wednesday?

In any case, I’m of two minds when it comes to recommending a pub for your Gaelic revels. Pittsburgh’s most authentic and welcoming Irish pub is certainly Mullaney’s Harp & Fiddle in the Strip District, which promises an all-day and all-night lineup of Irish music, both in the restaurant and at a tent party in its parking lot on both the proper holiday and parade day. 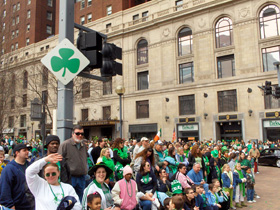 Some of my favorite food and beer in the city, though, can be found at Claddagh Irish Pub in SouthSide Works. Don’t feel compelled to pick one or the other, though—find a designated driver, have dinner at Claddagh, then drink and dance the night away at Harp & Fiddle. But whatever you do, do it on the 17th. (Mullaney’s Harp & Fiddle, 2329 Penn Ave., Strip District. Info: 412/642-6622, harpandfiddle.com. Claddagh Irish Pub, 407 Cinema Drive, SouthSide Works, South Side. Info: 412/381-4800, claddaghirishpubs.com).

Our thanks to Michael Righi, whose terrific photos were posted under Creative Commons license on his Flickr photostream. Have St. Patrick’s Day 2010 photos you’d like to share with us? Send us a link to your online postings, or email them to jwander@pittsburghmagazine.com, and we may post them in an upcoming gallery.

This article appears in the March 2010 issue of Pittsburgh Magazine.
Categories: Arts & Entertainment