Filled with modern touches, the two-level unit at Lumiere has breathtaking views of Pittsburgh. 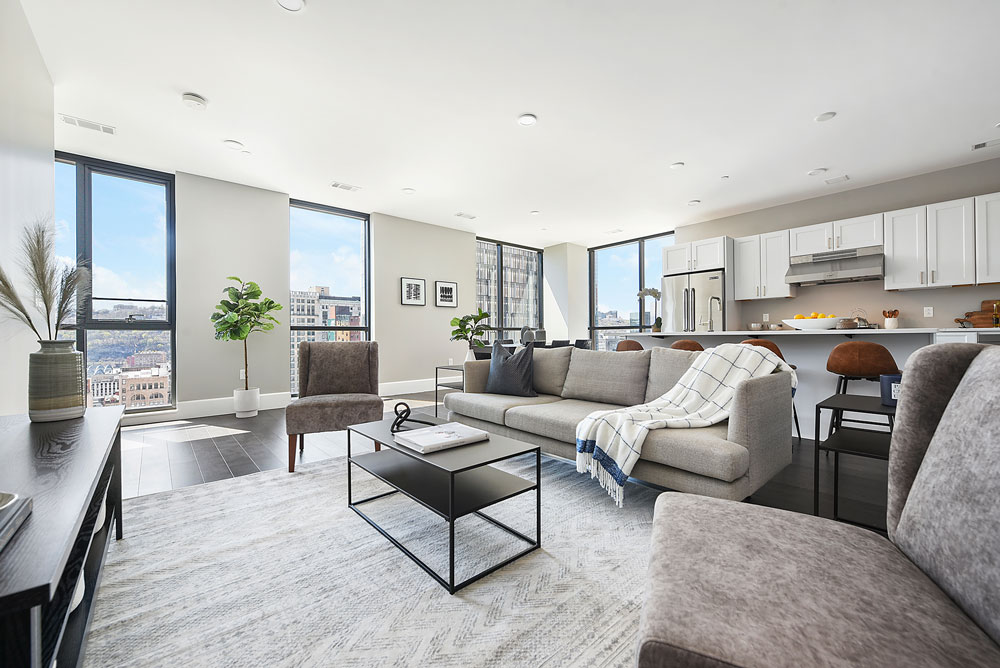 Built by Millcraft Development at the site of the former Saks Fifth Avenue store along Oliver Avenue, the building’s penthouse features four bedrooms, 3½ bathrooms and a 20-foot-wide glass NanaWall that opens to a spectacular view of Mellon Square and the Omni William Penn Hotel. 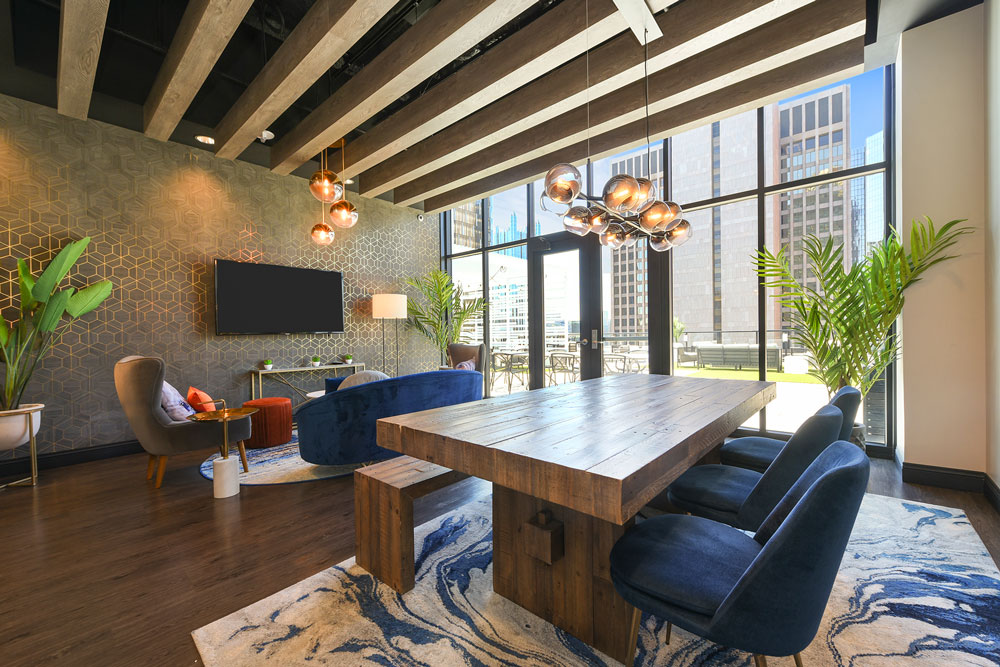 When the tours of the newly constructed building concluded in February 2020, more than 1,600 people had visited the penthouse. A few weeks later, the coronavirus pandemic caused a global shutdown.

These days, the building has 82% occupancy; there are 15 units left for sale, according to Realtor Heather Kaczorowski of Piatt Sotheby’s International Realty. 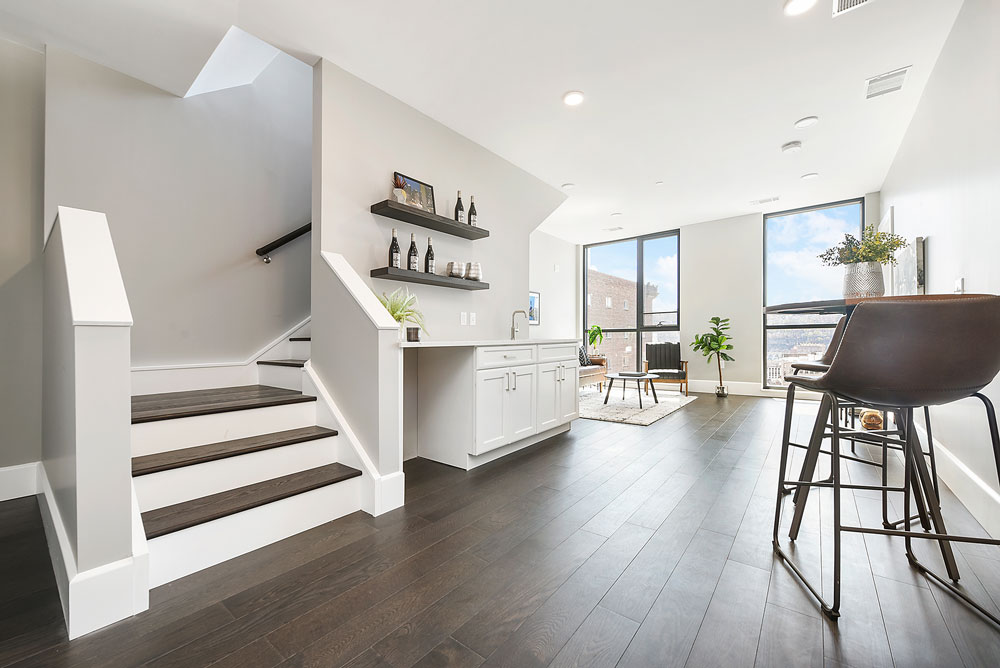 One of the more unique properties is Unit 1401, a multi-level corner condo with some of the most interesting views found around the city.

When the building was still under construction, the developers offered buyers a chance to purchase a corner unit connected over two floors, a highly unusual amenity in a residential highrise; the newly finished Unit 1401 is one such condo. On its upper level, it has a great room, kitchen, den and full bathroom. The lower level offers a second entertainment area, wet bar and two bedrooms. 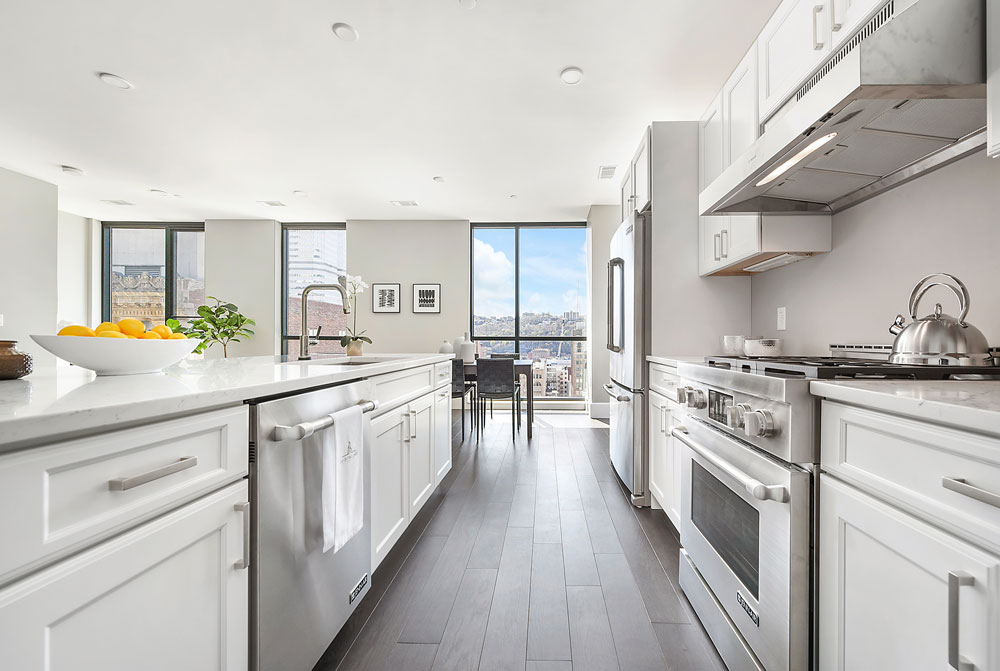 The open-concept great room has panoramic views of Downtown and beyond.

“The view is southwest facing and includes an urban view of The Tower at PNC and PPG Place,” Kaczorowski says. “It spans to Mount Washington, where you can watch the incline as it makes its way up and down the mountain.”

Anchored by a large island with white quartz countertops, the kitchen has white shaker cabinets and JennAir appliances. Bookended windows provide a dynamic dinner setting around a large table that seats eight. 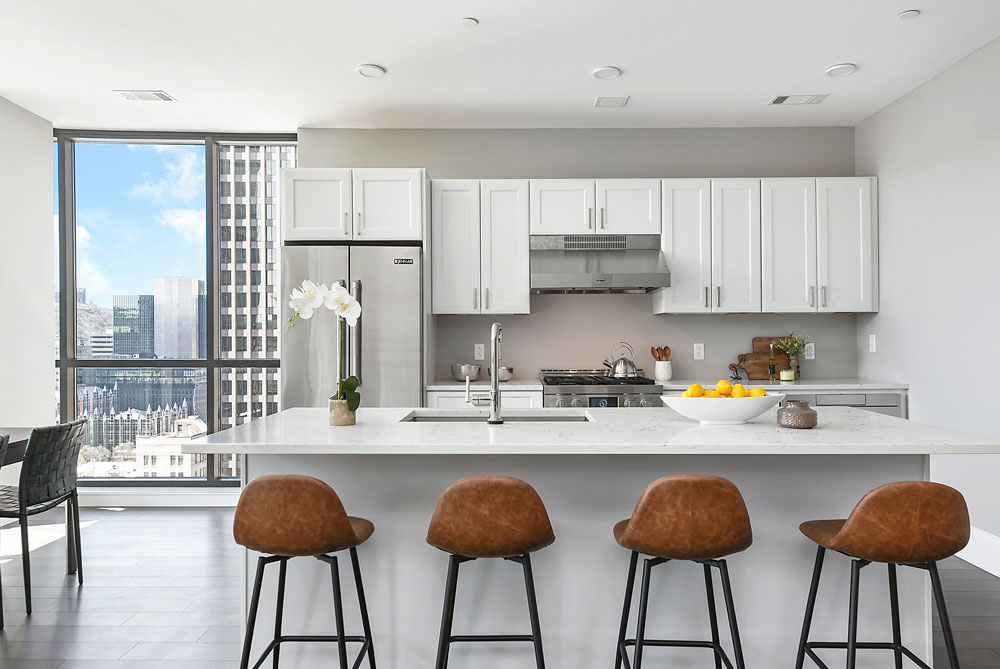 The expansive living area easily handles an extended sectional and accent seating. Everywhere you turn, the panoramic windows fill the room with images of bridges, buildings and mountains in ever-changing views as day turns to night.

The main level also hosts a full bathroom, a laundry area and a separate den that can be used as a private office. 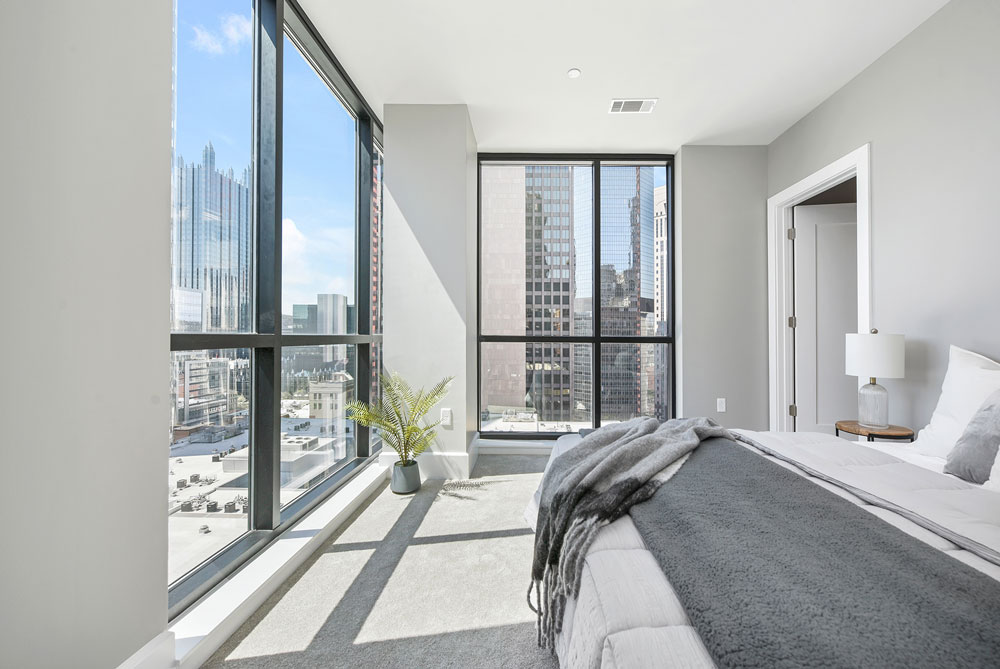 Downstairs is another laundry area, plus a secondary entertainment area with a small bar. The primary suite has a stunning wake-up view of the glass PPG buildings. Both bedrooms on this level have en-suite bathrooms. 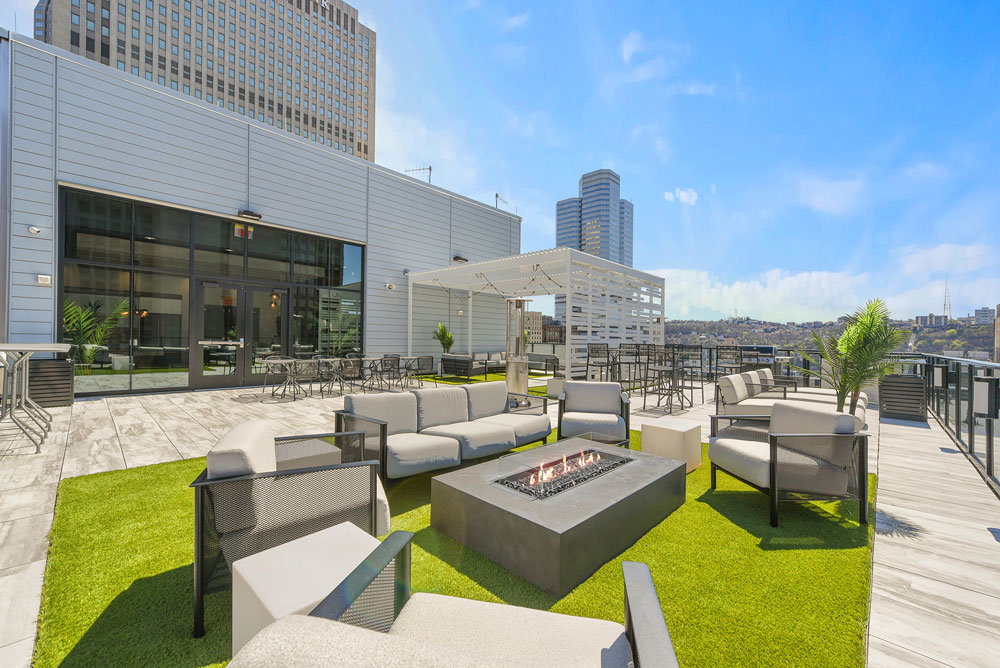 On Lumiere’s rooftop is an indoor entertainment area as well as a very large outdoor patio with seating, lighting and fireplace tables for chilly nights. Dogs have a separate rooftop play area (surrounded by 10-foot-tall walls) with artificial grass and an obstacle course. There also is a pet-washing station.

The building’s monthly HOA fee is $982 and the unit comes with one assigned parking space, plus an opportunity to add another one. 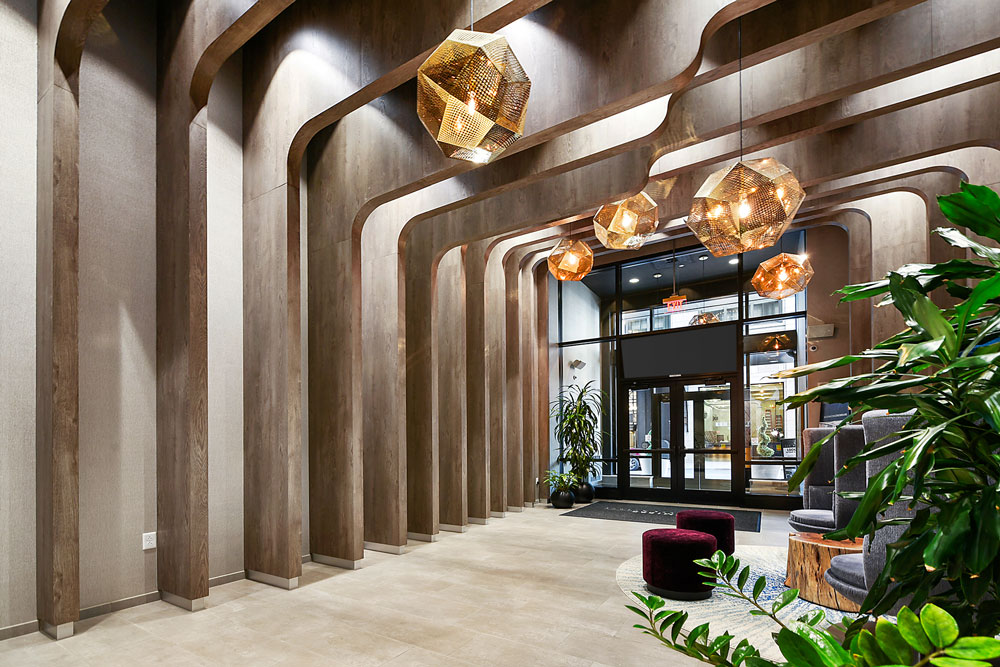 Lumiere’s stunning lobby is unlike no other in the city. Undulating sections of wood cascade from the ceiling to the side walls. Interspersed with geometric gold globe lighting, the effect is art deco glamour at its best. Around the corner from the concierge desk, a public seating area adds a touch of whimsy, thanks to multi-directional, cone-shaped sconce lighting.

“Downtown is finally rebounding after the shutdown,” Kaczorowski says. “As many other cities, we had to overcome a major challenge with the pandemic, but with the recent addition of Target, and new businesses and restaurants popping up left and right, the market is definitely making a comeback.”

Drawing on her years of experience covering the region’s real estate industry, Rosa Colucci’s Hot Property will offer an inside look into unique and historic homes currently on the market. Each week, Hot Property goes behind the For Sale sign to share the story of a special Pittsburgh area home. And four times a year, Hot Property will give an in-depth look at the region’s real estate market in Pittsburgh Magazine HOME, track housing prices and sales and detail where the hot properties can be found. Rosa can be reached at onecordovaroad@gmail.com.