You Should Know: Tom Scioli

This Pittsburgh-based comic-book creator strives to find play in his work. 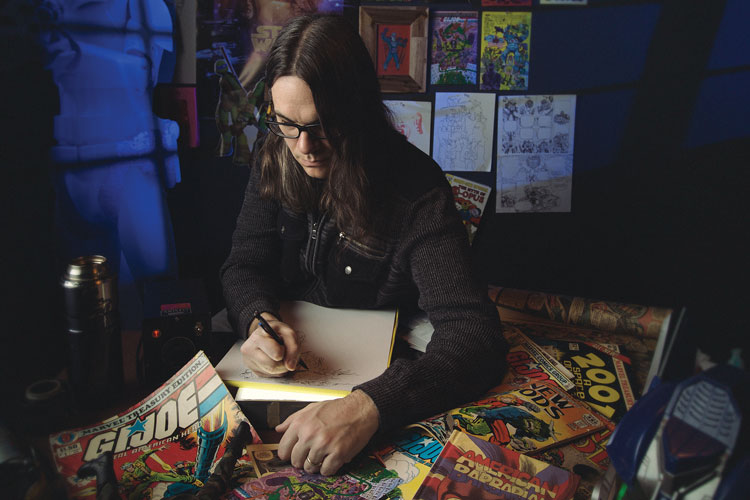 Though comic books increasingly are produced and consumed digitally, Pittsburgh-based creator Tom Scioli keeps his craft’s traditions alive by producing as much by hand as the modern process will allow.

​Scioli, 39, is a Philadelphia native who has called Pittsburgh home since studying art at the University of Pittsburgh in the 1990s. He began his career by self-publishing comics such as “The Myth of 8-Opus” and “American Barbarian,” cosmic fantasies that paid tribute to the work of the legendary Jack Kirby, whose work Scioli studied and emulated. From his first creative forays into comics, Scioli was hooked.

“It felt really empowering. You put a couple staples into something and fold it and it starts to look legitimate. It definitely had an addictive quality,” Scioli says of those initial attempts.

In 1999, Scioli’s efforts were rewarded when “The Myth of 8-Opus” was awarded a Xeric Grant, given to fledgling creators to assist in self-publishing. The award garnered enough industry attention that Scioli was able to book more widely seen work; eventually he was able to work on his comics fulltime.
Since 2014, Scioli has focused on “Transformers vs. G.I. Joe,” a psychedelic re-imagining of the two franchises which merges their respective worlds into one sprawling, unforgiving universe.

In it, he explores notions of responsibility, religion and the nature of reality. Critics have lauded “Transformers vs. G.I. Joe” for its analog aesthetic. With hand-drawn lettering, experimental layouts, visible pencil strokes and a coloring approach that relies on a carefully layered crayon base, Scioli brings playfulness and a jarring sense of humanity to his sweeping tableaus.

Scioli’s enjoyment of the work is palpable. “That idea of play is really important, and that’s maybe the hardest thing about doing comics is keeping that sense of play,” he says. “You do have to set aside a part of your psyche where you can play freely and not judge yourself or what you’re doing.”

Are there any specific comics you look at when you’re short on inspiration?  Anything by Frank Miller is good for inspiration. “Elektra Lives Again” is one I was looking at recently. Lots of innovative images and layouts. Dazzling architectural perspective. Barry Windsor-Smith’s “Weapon X” is another one. Hal Foster’s “Prince Valiant” is good for getting in the right frame of mind for detail. I like to surround myself with comics as part of my process, keep piles of them within reach.

What constitutes a successful day at work?  Staying at it. It’s really easy to get distracted. As long as I fully utilize the morning, I feel OK. Writing or figuring out drawing problems. Those are the golden hours for that. If I get something done in the 1-6 p.m. hours, that’s a great day. After lunch is a struggle. I’m usually able to get productive again after dinner. That middle block of the day seems to be when my brain just shuts off.

Where do you go when you take a day off?  Visit family. Go to the movies. Go for a long walk somewhere. Sunday is my day off. I try not to do any work on “Transformers vs. G.I. Joe” on my day off, but I’ll write or work on other stuff and do clerical tasks and correspondence. Straighten up the workspace. Taking time off, deliberately not working, has been a struggle. I’m most comfortable when I’m drawing, but I realized taking a day off was necessary. It gives me a little time to miss the work and get excited about it again. Otherwise it gets to feel like an endless slog, which it shouldn’t. This is my dream job. Most days, it’s a lot of fun.

Do you know the ending before you begin telling the story?  I always have an ending in mind, but I reserve the right to change it if I come up with something better.
What is the best thing about comics today? What’s the worst?  I’ll do the worst first, so we don’t end on a low note. The worst is the business side of comics. The “getting paid” part of comics. It took me [more than] a decade of hard work as a practicing, regularly published cartoonist to get to the point where I could make a living at it. I know lots of people who do top-notch comics work and still haven’t gotten there. It’s really difficult.

The best thing about comics is that the internet allows creators unlimited global distribution of their work in full color. You don’t need to jump through hoops or kowtow to gatekeepers. You can just draw it, color it and post it online. It’s incredibly empowering. You can build a readership, a following, a fan base. I remember a time where that didn’t exist. We’re very fortunate.

This article appears in the April 2016 issue of Pittsburgh Magazine.
Categories: Community Feature