You Should Know: Samuel W. Black

One of the most noted contemporary scholars of African-American culture is changing the way people look at black history through his work at the Sen. John Heinz History Center. 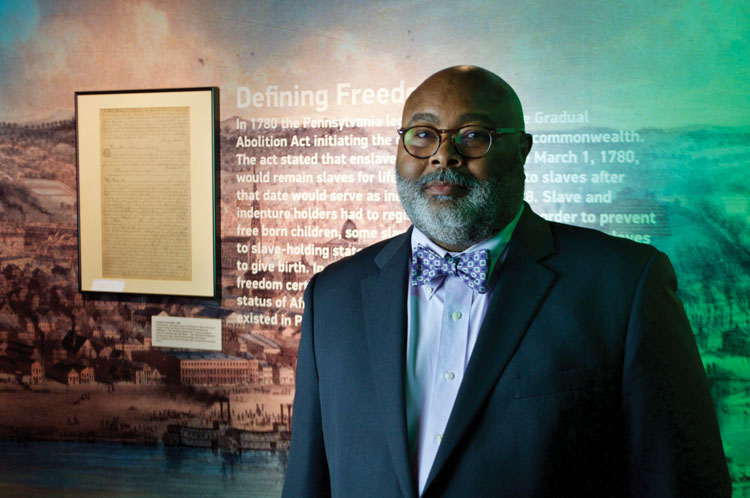 Samuel W. Black was in no hurry to leave Cleveland for Pittsburgh.

He had lived there for 10 years, and the author and scholar says he enjoyed his work at the Western Reserve Historical Society. So when his wife, also a historian, got a job teaching at Carnegie Mellon University in 2001, he didn’t move for a year. Edda Fields-Black commuted to Cleveland on the weekends, and her husband never visited the new city.

But eventually, Black started to explore his options here.

He toured the University of Pittsburgh, the Sen. John Heinz History Center and other spots at which he thought he might like to work.

In 2002, the now-55-year-old North Point Breeze resident was hired at the History Center — he’s now the director of African-American Programs. It’s a good fit. Black, who completed his undergraduate degree at the University of Cincinnati and holds a master’s degree from the State University of New York at Albany, is a widely lauded contemporary African-American scholar and has edited or co-authored three books. He’s been the president of the Association of African American Museums for the past five years.

“Our member institutions range from small historic houses to the Smithsonian National Museum of African American History and Culture, so we have hundreds of member organizations and individuals across the country — and in foreign countries as well,” he says. “I’m very proud of that.”

At the History Center, he works on many exhibits throughout the museum, and he’s the project director for “From Slavery to Freedom,” a $2 million multimedia project that includes an exhibition, publications, a film series, craft programs, a visual journaling workshop, research, collections and lectures.

What is some new research you’ve done for the exhibit, “From Slavery to Freedom?”
There’s a section of the exhibition, we call it freedom seeker experience, and it focuses on [the] impact of the natural environment on runaway slaves. People talk about runaway slaves in terms of slaves making it to some safe house, and so I always wondered: If someone is traveling on foot or horseback or whatever and going hundreds of miles, they’re going to get hungry, and once they run out of whatever food they brought with them, they’re going to be really hungry, so what I wanted to do … is look at, how did people survive? … So what I did was research people eating off the land, using natural environments to build shelters, using plants, flora, to make medicine, to make tools, everything you would need to survive … That’s the part that I’m really proud of that’s making its way around academia and museums and really causing people to take a different look at the how they interpret the Underground Railroad.

Why didn’t you like Pittsburgh at first?
It was different for me, because I came from a city [in which black people made up a majority of the population] to one that’s probably one-third black. I was used to seeing a black mayor, a black county prosecutor, a number of black judges. The head of the city foundation was black; the heads of corporate foundations were black — it’s a totally different world. For someone like me who is African-American who works in African-American culture, I really had to start over.

Do you like the city now?
I don’t think you can ever totally like a place, but let me just say that it’s grown on me … It is a very attractive city once you get used to all the hills and the narrow streets and the left turns.

What do you feel is the role of Black History Month in today’s world?
I don’t think the role has changed. I know every now and then you get detractors … Carter G. Woodson [the founder of Black History Month] … everything else he did was to correct the void of black history in the world and national history, and he said, let’s set aside a week — initially it started out called Negro History Week in 1926 — and do programming and celebrate it.

Black history is not an American thing, and people may be surprised [to learn] Black History Month is celebrated by those [around the world], by those who live in Japan, the Japanese, not black folk who live in Japan.

People say, ‘They gave us the coldest month to celebrate and the shortest,’ but ‘they’ didn’t give us anything. It came from a black man in Washington, D.C., in a black neighborhood teaching at a black school who founded the Association for the Study of African American Life and History … and February was chosen because that’s the month of Frederick Douglass’ birthday and Abraham Lincoln’s birthday.

This article appears in the February 2016 issue of Pittsburgh Magazine.
Categories: Community Feature