You Should Know: Reggie Howze

You’ll likely recognize him by sound before sight, coaxing tunes from the saxophone he’s played on Pittsburgh streets for more than a decade. 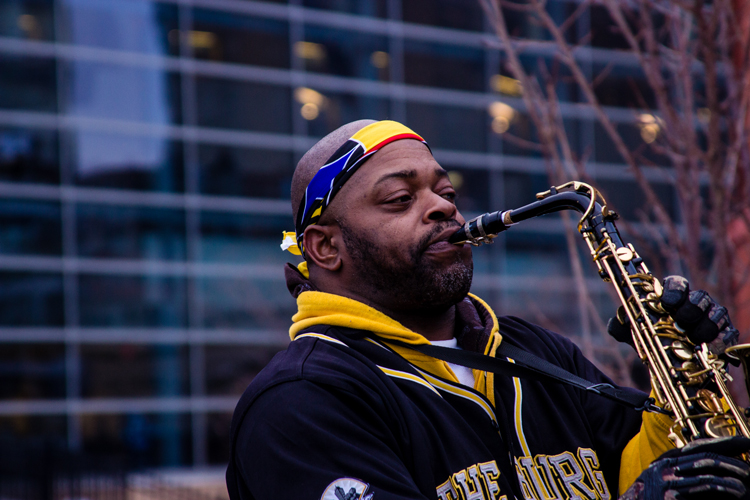 He has played saxophone for more than 30 years, and his musical repertoire draws upon oh-so-many songs and ditties. You’ll find him on the Clemente Bridge or across from Consol Energy Center or on a sidewalk outside of Heinz Hall but not on any stage. When you’ve visited Pittsburgh for sports and other events, you’ve likely seen or heard him perform. He won’t miss the Pirates’ Opening Day on April 13.

Regulars hail him as “Reggie,” or simply “Sax Man.” He makes about 150 appearances a year. He’s the city’s longest-running busker — arguably a bit of a celebrity and proud of it. This smiling, witty street performer has been part of the city’s entertainment fabric since 1998.

He’s Reggie Howze Sr., 47, a product of the Hill District, now of Garfield. He started playing bongos and trumpet as a kid at the former Robert L. Vann Elementary School, once one of the city’s highest-achieving elementary schools. “My notes weren’t coming out clear, so [later a teacher] switched me to sax,” he says. “There was no looking back.”
He says music, athletics and relatives were positive influences while growing up in public housing. His chosen “career” as a busker, however, has meant paying an occasional fine resulting from minor run-ins with the law, for trespassing (for refusing to move from a special spot) or for re-selling some game tickets — “extras” he says fans have thrown his way. 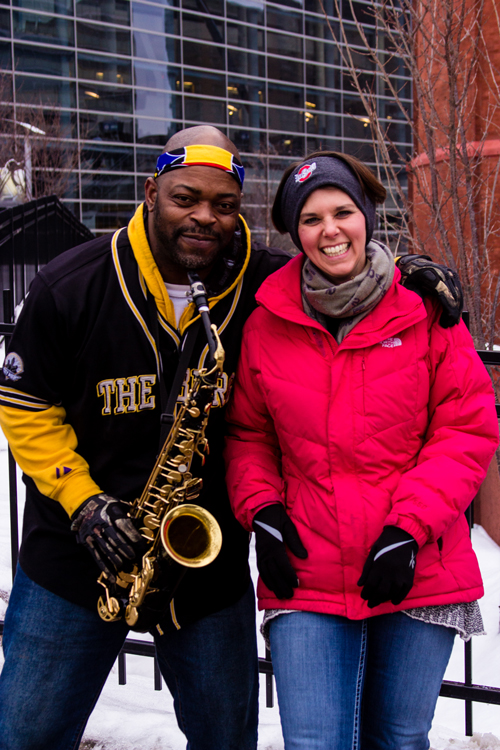 He saved change as a youth to buy sheet music when Volkwein’s Music was on the North Side. He claims to know all or part of more than a thousand songs, popular tunes and sports ditties.

He has no immediate plans to quit.

“As long as my health holds out, I’m having fun and people support me,” he says.

When he finally does blare out “Isn’t She Lovely?” or “The Pink Panther Theme” or “Sunday Morning” for the last time, he says he intends to be an adult probation officer. He’s working on an associate degree in child development at Community College of Allegheny County, and he previously worked with a Hill District-based center for recovering drug/alcohol addicts. He tried out twice, albeit unsuccessfully, as a catcher prospect for the Pirates and Kansas City Royals.

“My horn and making money have taken precedence,” he says. 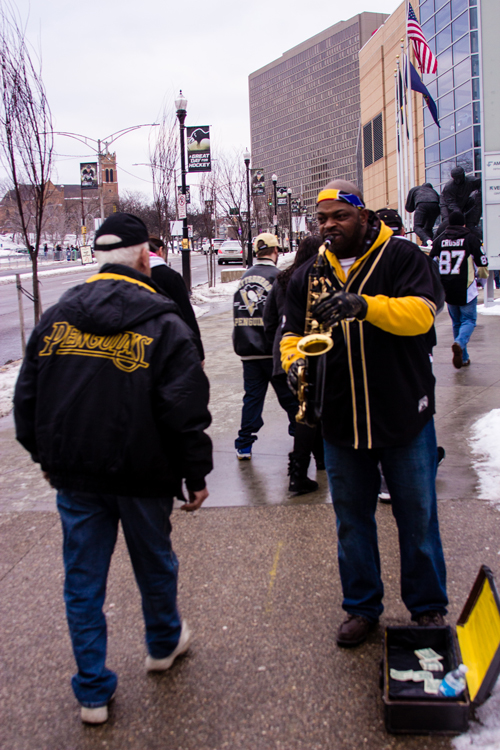 How and when did you get started as a busker?
I often saw a guy named Roger who played the trumpet for money, and I thought, “I’m going to bring my horn and do this someday.” Years later, when I was picking up a birthday cake at the Jenny Lee Bakery with two of my [five] kids, I talked to a man playing sax for tips in Market Square. He said he was from New Orleans and making $125 a day. I thought, “Wow!” A month later, I played in front of Saks Fifth Avenue and got $40. Twenty of it came from a woman who said I reminded her of street performers during a visit to Paris with her late husband.

Do police hassle you?
Now and then, an officer stereotypes me as a panhandler. Ninety-five percent of the police are good and understanding. They don’t harass me as long as I’m not a headache to them or passing people … And I don’t need a license because the city doesn’t have one for people like me.

This is a little personal, but … how much money do you make?
I’ve had days when I’ve only made $3 or $4 … But the good days make up for the bad days.

What have been your best moments?
Joe Negri [talked to me outside] Heinz Hall. “Dan the Man” from Cleveland stops when he comes for Pirates games. He beat cancer twice. I played “Kenny G” at a Steelers tailgate for a guy [who] once gave me $350 in Morgantown. He was dancing [with] his friends.

I shared my spot with a busker from Virginia [“Markey,” who plays drums on buckets turned upside-down] last year. We played a medley of Beyoncé songs. We had 300 or 400 people dancing in the street [outside Consol Energy Center].

Who’s your competition?
I’m often imitated, never duplicated. A bagpipe guy has been around for four or five years. They respect my territory. I’ve had panhandlers try to set up near me, and they’ve even threatened me. I play all year long in all kinds of weather.

Nobody in Pittsburgh has been doing it longer than me. One writer called me the “No. 1 Busker in Pennsylvania.” He said you either love me or hate me.

This article appears in the April 2015 issue of Pittsburgh Magazine.
Categories: Arts & Entertainment