Meet the mastermind behind the botanical blueprints at Phipps Conservatory and Botanical Gardens. 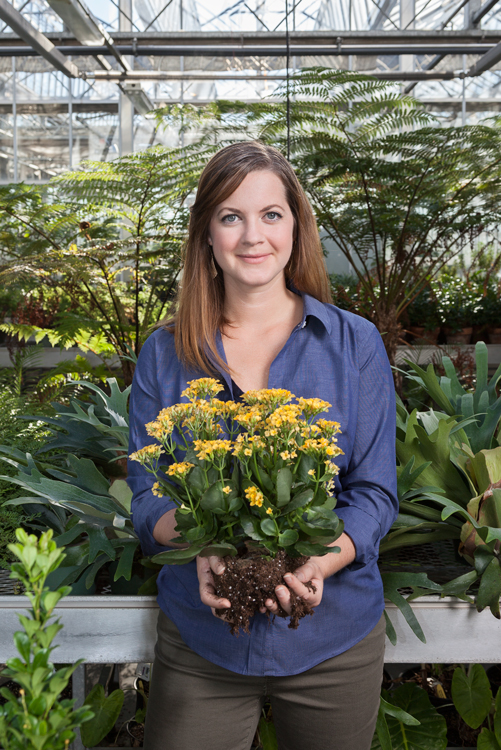 Jordyn Melino is drawn to water, as are many of the plants in the exhibits she designs.

A native of Jacksonville, Fla., Melino, 30, of Lawrenceville, admits the Allegheny, Monongahela and Ohio rivers have nothing on the Atlantic Ocean. But she was attracted to the rivers just the same.

​Melino moved to Pittsburgh in 2003 to study environmental science at Carnegie Mellon University. She wanted a job that enabled her to create things and spend time outdoors, but at that time she didn’t know exactly what that could mean. She realized she could turn her horticultural hobbyhorse into a career when she completed her Master of Landscape Architecture degree in 2014 at Chatham University.

​Melino has been the exhibit coordinator at Phipps Conservatory and Botanical Gardens for four years. She leads the design team for three of the conservatory’s annual flower shows; this year she is working on the Spring Flower Show, Winter Light Garden and Garden Railroad. She also codesigned the Summer Flower Show and worked on the Tropical Forest Congo. Melino chooses themes, lays out designs, picks plants and works with the facilities department on props.

For research, the conservatory sends Melino and the curator of horticulture overseas. Melino traveled to India in 2010 and Cameroon in 2013 in preparation for the changing Tropical Forest display, and she has visited gardens within the United States.

In recent weeks, Melino has been busy designing the outdoor Winter Light Garden, and she’s most excited to show off the panoptic Color Walk and a pair of 15-foot snowflake trees.

The Winter Light Garden and the Winter Flower Show, which Melino says is her favorite, premiere Nov. 27. This year’s show was inspired by the Christmas carol “Deck the Halls.”

“Part of the song is ‘tis the season to be jolly,’ so that’s what we’re playing off of,” she says.

Do you have a favorite plant?  Whoa! How do we pick? … OK, this is a really weird tree. It’s tropical. It’s called a Monkey Puzzle. It’s an araucaria [evergreen coniferous tree]. There [was] one in the Serpentine [Room this summer]. It’s very slow-growing, but very spiny and spikey … It’s called Monkey Puzzle because monkeys couldn’t figure out how to climb this tree — it was so spikey. So, it’s a really interesting plant.

Do you have any interesting stories or favorite memories from your research trips with Phipps?  There was this moment when we were in Cameroon [Melino and the former curator of horticulture]. We had two guards we were traveling with and then two porters. So it was the six of us just making [our way] through Lobéké National [Park], and it was so dense that the guy in the front had to use a machete to clear through the path. And all of a sudden, we heard this giant roar, this giant growl. Maybe like 20, 30 feet away from us was a male gorilla. Fortunately, he didn’t come towards us, but that was just a warning to stay away. He probably had family nearby.

How do you get inspiration for what you’re going to do?  I think the most difficult part is choosing a theme that we haven’t done yet because we’ve done 122 years worth of shows. In the past few years, we’ve added a lot more interactive parts to our exhibits — things that are really exciting. For this past spring show, we had motion-activated rain clouds in the Serpentine Room. That’s what inspires me — trying to find what’s that next element of surprise for our visitors.

What do you like the most about designing these public spaces?  I really appreciate that this isn’t just a beautiful flower show or a beautiful design, but there’s also an education message. And that’s what’s really wonderful about public gardens. It’s not just these aesthetics, but [there are] also some other components that I think enhance the visitor experience.

What has been your favorite exhibit?  I would say the Tropical Forest Congo exhibit right now. It’s our most intensive design process — it’s about a three-year design process. But also, I just love how authentic we make this exhibit and how we include the community in the design process, as well as work with local artists to either recreate or build off of the cultural styles that Ben and I saw when we were in Cameroon. So it really gives me an opportunity to … put a lot of energy into an exhibit that’ll be up for three years. And the great thing about it is that, over the course of three years, we’ll probably get a million people that come through the conservatory and see that. That to me is such a great process, and it makes the exhibit so authentic. I’m very proud of it.

This article appears in the December 2015 issue of Pittsburgh Magazine.
Categories: Community Feature, From the Magazine