You Should Know: Margee Kerr

For the past year, the ScareHouse’s resident sociologist has been traveling the world with two goals: to be scared and to write about it. 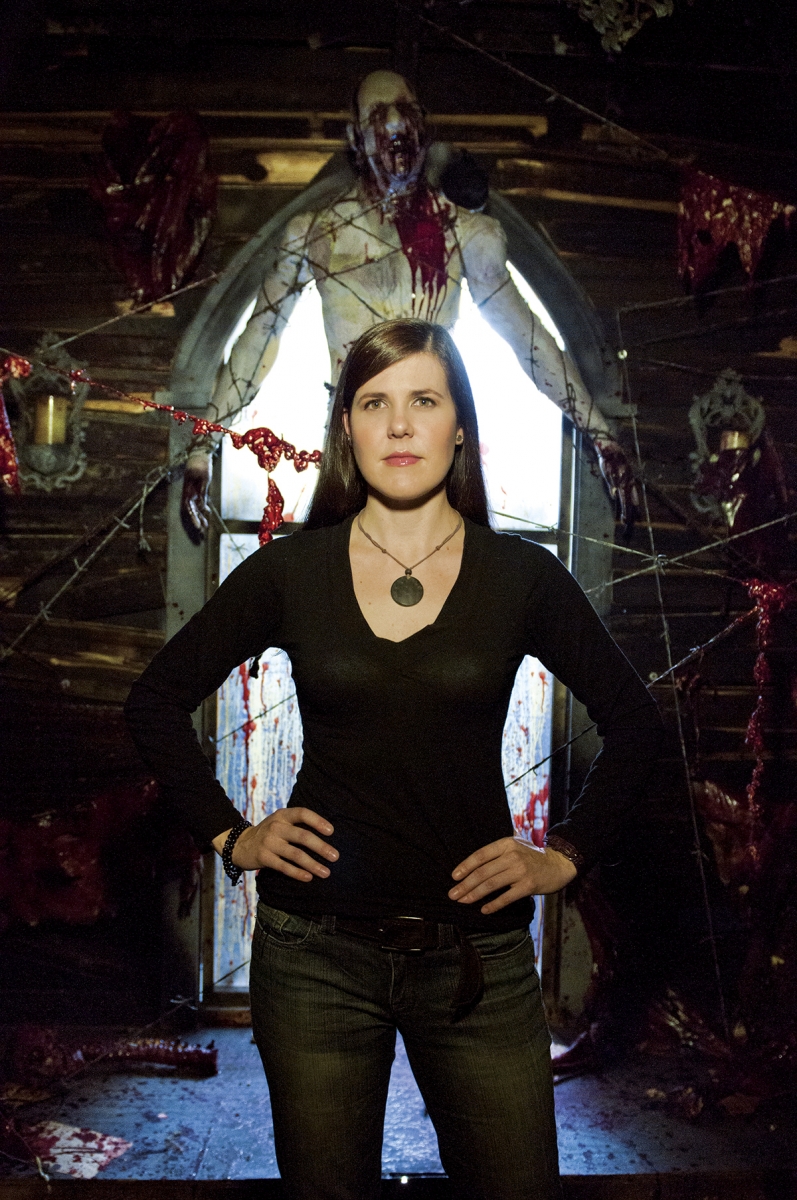 Margee Kerr has turned her work at the ScareHouse into an upcoming book backed by hands-on research into what scares people — and how we can benefit from being scared.

The Baltimore native joined the staff of the ScareHouse, named one of America’s scariest haunted houses by the Travel Channel, in 2008 after visiting it on a whim. (The Etna establishment opened for the season this year on Sept. 19). Her goal at the time was simply to release some of the pressure she felt from daily research while working on her doctorate and at the job she held then. When Kerr told owner Scott Simmons that she loved the ScareHouse so much she could live there, he told her she was welcome to work at the haunt. She started in the box office but transitioned to resident sociologist after that season.
Kerr, 34, of Aspinwall, earned a Ph.D. with a focus on the sociology of health and illness from the University of Pittsburgh. She says she’s always been interested in social-distance preferences, the tendency of groups to hold some kinds of people close and others far away, and how differences, which people could be afraid of, may be perceived as illness.

Her focus on data gleaned from ScareHouse customer surveys evolved into — and continues to contribute to — the research she’s doing for her first book. Set to be released next year through Public Affairs Books, the book will focus on how and why we can benefit from thrilling and scary activities. Kerr has been traveling the world seeking thrills for research: jumping out of airplanes, riding the tallest and fastest roller coasters and spending lots of time in abandoned mental institutions.

Tell us about your book research.
It’s been so much fun. It really has changed me in ways I didn’t expect. Originally the proposal didn’t involve any personal experiences, but I was talking to my editor and he [suggested], “Why don’t you go and do some of these things?” And I built this list of adventures I wanted to go on and went on them.

What was the most surprising experience?
The CN Tower Edge Walk. [Editor’s note: Adventure seekers can walk along the roof of the CN Tower in Toronto while tethered to an overhead rail system. It’s the highest full-circle, hands-free walk in the world.] I did not expect the response I got — I could usually predict my reactions. I thought, this won’t be scary, and I was terrified, and I didn’t expect that, and I loved that. Even before I went out on the edge the guide [asked], “Are you nervous?” And I was like, “No, I’m not scared of heights,” but my brain shut down.

What’s your goal?
I want people to challenge themselves and do scary things. I think there are so many benefits to it. There is so much research that shows when we challenge ourselves with safe-scary things we are more prepared for “scary” experiences.

Are you scared of anything?
Yes. I have found out what I’m scared of, and that’s going to be in the book. It’s going to be my “Indiana-Jones-in-the-pit-of-snakes” moment . . . I get asked a lot what I’m afraid of, and depending on who’s asking I say, “Drowning.” . . . Growing up, I was afraid of bridges. Now it’s more kind of future-oriented things.

What do you most enjoy discovering?
I think the thing I love the most is what brings people together. I’ll watch people come in [to the ScareHouse] and typically they’ll be standing far apart with their arms crossed, and they’ll come out and they’ll be high-fiving. They say it’s a good idea to bring a date to a haunted house, and it is. When we’re scared, we’ve got the arousal system activated . . . and you can go from feeling scared to pretty sexy pretty quickly.

After this book is published, what’s next?
I’d like to really dig into the connection between actual violence and engagement with symbolic violence [in movies, television shows, video games, etc.]. In Bogotá [Colombia, which is reputed to house some of the world’s notorious drug cartels], there was one haunted house, and it was in an amusement park where really only tourists went. Anthropologists say, “Yeah, they don’t want to scare themselves because you walk outside [into a scary environment].” But in Mexico, there’s lots of violence, but they’re embracing scary things. In the United States, we’re objectively safer than we’ve ever been, but the rates of phobias and anxiety disorders are higher than they’ve ever been.

This article appears in the October 2014 issue of Pittsburgh Magazine.
Categories: Arts & Entertainment