You Should Know: Lesley Rains

Her East End Book Exchange is more than a bookstore. It’s a hub for the literary community. 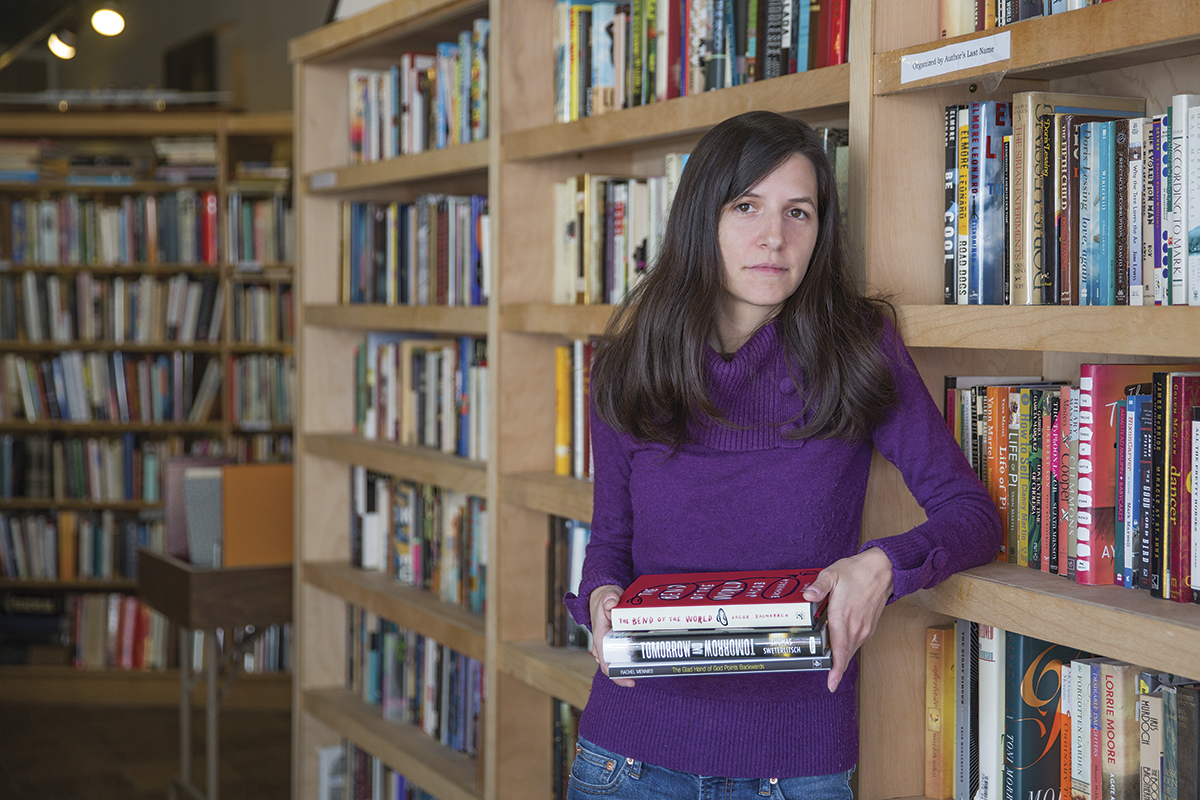 In early 2011, Lesley Rains, who had recently moved back to Pittsburgh, was looking for a book. It was a Jane Austen novel, she recalls — in other words, a book that shouldn’t be hard to find. She went to several bookstores, but there weren’t that many to visit, and still she couldn’t find the book. As simply as that, it occurred to her to open a bookstore. When national chain Borders went out of business later that year, she saw it as a sign — not to back down from the idea but to pursue it. After all, Pittsburgh’s need had just gotten greater.

The East End Book Exchange started in summer 2011 as a pop-up. It didn’t have its own storefront but “popped up” outside of coffee shops, in galleries, in shared spaces and near other storefronts.

“All I needed [were] boxes of books, my car and a place to set up,” says Rains, 34, of Lawrenceville.

It was a low-risk way to get an education in the book business, allowing her to assess what the community needed. Her brick-and-mortar store, which opened in 2012 in Bloomfield, is not only a growing bookseller but also is an after-hours community hub. Most weeks the store holds at least one reading or community event, and last year she didn’t seek out any of that programming — people came to her with ideas and requests.

Rains, who joined the Bloomfield Development Corporation after opening her business, says she is happy with the store’s success. “We can always add more books and more shelves, but in terms of being an events space, I’d just like to see people continue to utilize us,” she says.

Did starting your business as a pop-up bookstore influence the way you eventually opened your own space?
I didn’t consider it that way at the time. I really just considered it a self-made internship, but seeing the way people responded to it and the way in particular local writers responded to it . . . [made me think that] being more community-focused . . . could be a way to get my foot in the door in terms of finding a niche and finding a distinct identity in Pittsburgh’s bookseller universe. I just got a big sense that anyone who wants to open a bookstore in this climate, in this day and age, has to have this event/community focus. You have to be a multifaceted place in some way to survive.

So from the beginning you were thinking this would be a community space as well as a bookstore?
For sure.

What are some of the types of events that you host here?
We’ve done a lot of readings [such as] poetry readings, and those can be book launches for new releases or just a group of people who want to host their own reading. We’ve held some panel discussions, we’ve held community meetings, [but] mostly multireader meetings have been the biggest draw and biggest focus for us.

How do you think a community space such as the one you offer plays a role in the larger literary world of Pittsburgh? I think it’s just a nexus point for bringing all of these different facets of the literary ecosystem . . . together. [There are] a number of indie publishers, and there are so many writers, poets and creative nonfiction [writers] and novelists, and [the East End Book Exchange is] a place where they can come and see each other. I think they all are sort of aware that each other exists, but when somebody has a reading they can actually come and be in the same room and talk and get to know each other on a personal level in a way that just communicating on social media or via email or just reading each other’s work doesn’t allow. Somebody described the place one time after an event as [being] like a salon, in the old 19th-century, French version of the word — a meeting of the minds.

Moving forward with the store and your role in the community, what would you like to do?
. . I’d love to do more with children . . . I know the library system is very active in children’s literature, but the bookstores around here I don’t think court young readers the way we could. I’d like to bring that — whether it’s story hours or parent/child read-alongs. I’d love to have more children’s-focused activities here.

This article appears in the January 2015 issue of Pittsburgh Magazine.
Categories: Arts & Entertainment