You Should Know: John A. Pollock 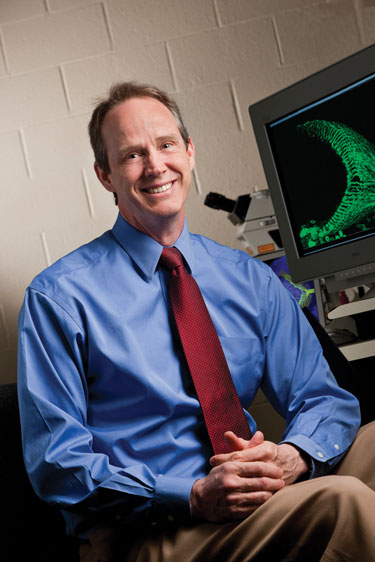 When a colleague of John A. Pollock — a professor of biological sciences at Duquesne University — was challenged by the National Science Foundation to share scientific discoveries with the general public, the two of them began using the local planetarium in an unconventional way.

“We started making planetarium shows that didn’t take you to outer space but took you to inner space,” Pollock says. “I was tapped to help get biological imagery to be part of the show … Because I had done animation and film work before it all made sense.”

The first planetarium show struck a chord with Pollock — who has a background in physics, biophysics and neuroscience — and prompted him to create a planetarium curriculum series. From there, he began studying the reaction of museum audiences and school teachers, hoping that elementary- and middle-school educators would bring the material into classrooms.

After discovering that the teachers were afraid of their students asking questions they couldn’t answer, Pollock sought out help to make his lessons more accessible.

“I walked in and knocked on the [School of Education’s Dean’s office] and told her my problem and asked if I could have some students to work with me,” he says. “That put us on the course where we could build these education resources and make them have a higher utility.”

As founding director for the Partnership in Education — a Duquesne-based program that uses multimedia tools to improve STEM education — Pollock has continued to create tools to help the public better understand science and health. The majority of his funding comes from the National Institutes of Health Science Education Partnership Award.

He also took an interest in the country’s literacy problem — in 2003, studies found that 110 million people could not effectively read — which led to the creation of his award-winning BiblioTech ebook “CITYHACKS: In Search of Sleep.” The ebook was a partner to a television special he produced titled “Scientastic! Are You Sleeping?” It won two Emmy awards in 2015.

While Pollock has created a number of resources, he’s especially proud of the Charles Darwin Synthetic Interview app, which has been recommended by the Parents’ Choice organization. The app — available for free on iPad/iPhone and Android — allows users to ask a life-like Charles Darwin avatar questions about both his life and his science (his answers are taken from Darwin’s actual writings). Users also are provided with supplemental animations and information from outside experts.

“I’m very proud of Darwin because I feel it is a very, very good tool and we’ve done lots of evaluation on it,” Pollock says. “Time and time again we find that people who sit down with it really enjoy it. It’s designed in a way where you can sit down for five or ten minutes and get something out of it, but we find that people think they’re going to sit down for five minutes or so but they click another one and another one.”

Why Darwin?
There are lots of reasons. One goes back to the fact that about half the people in this country don’t appreciate or value the notion that evolution is a fundamental principle of science. They think it’s questionable because scientists have used the word ‘theory,’ and the context of the word makes them say, ‘Well, you can’t prove this’ … I wanted to get people to have a deeper and better appreciation of [evolution] because it matters in everyday life.

How were the app’s interview questions compiled?
I always know that the first place to start is to ask the general public, ‘What do you know? What do you want know?’ and then ask the scientists, ‘What does the public need to know?’ What I did to start was [to run] a really simple survey with a half-sheet of paper that said ‘If you met Charles Darwin, what would you like to ask him?’ We gave that out with pencils to about 1,000 people in Pittsburgh. Kids in schools as young as third or second grade, all through high school, college students, people at cocktail parties.

Why did you include video of outside experts?
We had to have the answers to the questions be as explicit to what Darwin says as possible … For questions like, ‘Tell me about genetics?’ I was 100 percent sure we can’t have him say that because he’s dead and he died a long time ago. So anything that happened after he was dead or happened when he was alive that he was unaware of, he can’t comment on. But we can’t leave that out there. That’s when I knew I wanted to bring in experts for secondary commentary.

This article appears in the September 2016 issue of Pittsburgh Magazine.
Categories: Community Feature