You Should Know: Jeremy M. Raymer

This Pittsburgh artist has painted some of the city’s most recognizable murals. 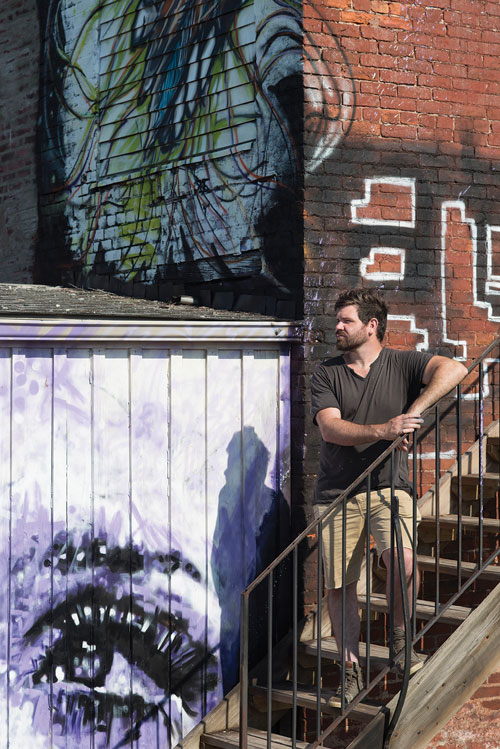 The Uptown resident has murals scattered throughout the city, each with his own distinct artistic style. While he admits he didn’t take the craft seriously when he was young, that changed during college and even more so after.

Raymer, 35, attended South Allegheny High School, where he played tight end and defensive end for the football team. He was positive he was going to play the game in college, but when an injury cancelled those plans, Raymer decided to study biomechanical engineering at the University of Pittsburgh. His main courses were in engineering, but his elective courses always ended up being studio arts classes, such as sculpture and drawing.

“My drawing 2 instructor [and I], we always butted heads. But he kind of enjoyed my work, and he told me that I drew like a painter [and] I should take a painting class,” Raymer says. Painting became his niche.

After graduation and four years spent painting and working in engineering jobs in San Francisco, he got an offer to work as a telecommunications design engineer/project manager in Pittsburgh and returned home. He bought a house in Lawrenceville and started covering it in art. His work took off from there.

Raymer accepted a position in April 2014 at Westinghouse Electric Co. as a senior test engineer, working there while painting public murals on the side. In May, he resigned from his position to pursue art full-time.

“I didn’t enjoy my job. [It was] pretty high-stress,” he says. “It got to the point where I’m getting so many requests [for art projects] every week I couldn’t handle doing the day job.”

The largest concentration of his work, which he describes as “moody with an austere [sense] of melancholic beauty,” is found in Lawrenceville, but he also has pieces in other neighborhoods and outside of the city. His largest piece, a colorful mural of parrots, adorns a wall in the rear courtyard of Cupka’s Café II in the South Side. He painted the Bill Murray and burger pieces on the walls inside Stack’d restaurant in Oakland and plans more pieces at commercial and residential addresses.

He recently purchased a shipping container, intending to turn it into a mini art studio next to his home this year; he plans on selling some of his work there and also putting on small shows while continuing to paint around the city. He’s also preparing for his first solo show later this year in the gallery of the law library on Pitt’s campus.

Raymer says he hopes to take his skills to the global market, travelling around the world doing shows and painting pieces, but he also wants to help other artists here in Pittsburgh.

“I want to provide other local artists an opportunity that I feel like I wasn’t able to get; I reached out to a lot of galleries here, and no one really ever showed any interest to give me my own show. And with the shipping-container art gallery, I want to be able to promote other artists,” he says.

What do you call what you do?
I guess it’s definitely in the realm of street art. I wouldn’t say I’m your typical street artist, given my background and some of the subject matter I choose and the styles and techniques that I use.

Do you want to stay in Pittsburgh?
I do want to keep this as my base, but I definitely want to start to get some artwork up in other cities. I’m hoping to do a trip to Chicago; I made a connection last year [with] a street artist I helped come up with some spaces here, and he’s kind of offered me the opportunity to come out there and hook me up with some space, so that’d be my first area I’d probably be doing.

What do you think is your most well-known piece?
The front of my house. [Raymer’s rental property and previous home in Lawrenceville is covered in a large painting of a man with a large, eerie smile.] The only misconception about that, and not that I would think most typical people would know, it’s actually not The Joker. It kind of goes in line with my old-style photography that I like to choose [to base works on; he’s] an actor, his name is Conrad Veidt. He was a ’20’s and ’30’s impressionist German actor. The movie [that inspired the painting] is called “The Man Who Laughs,” and the guy who developed The Joker was inspired by this character.

What is your favorite piece that you have done?
It’s always the next one I’m doing.

This article appears in the July 2016 issue of Pittsburgh Magazine.
Categories: Community Feature